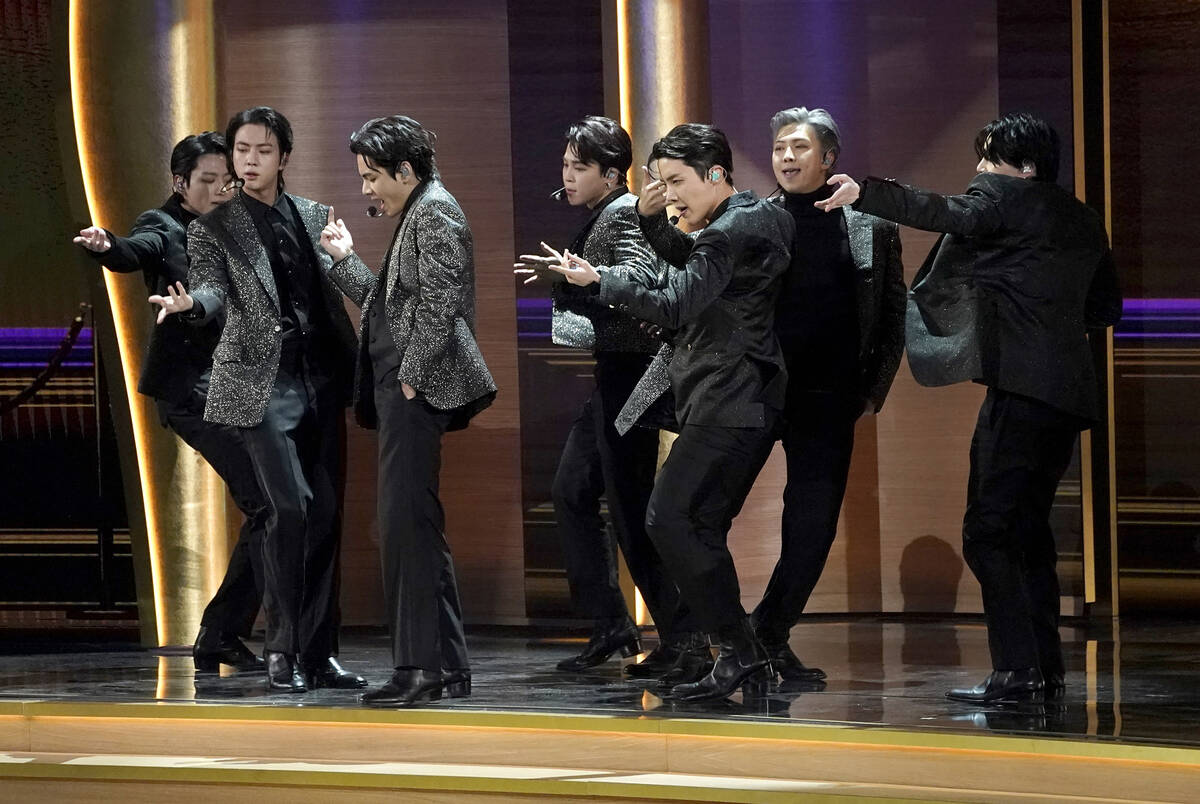 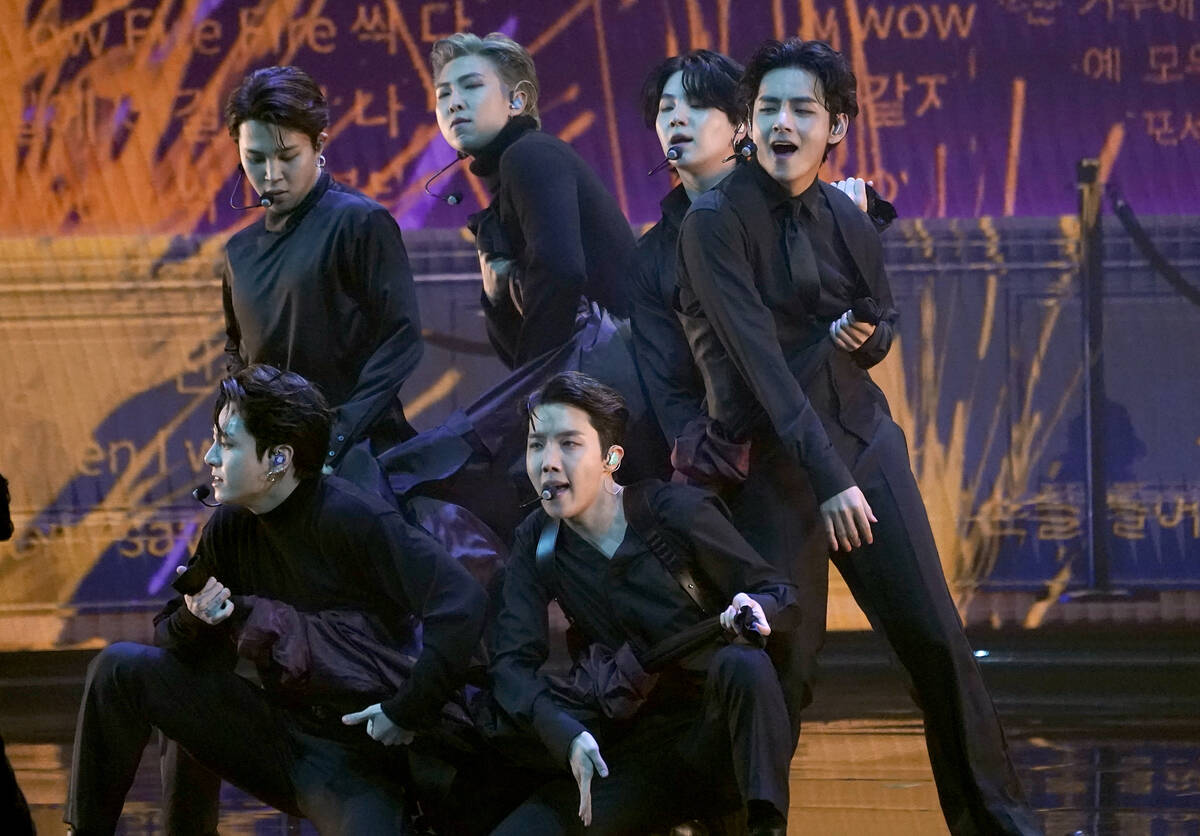 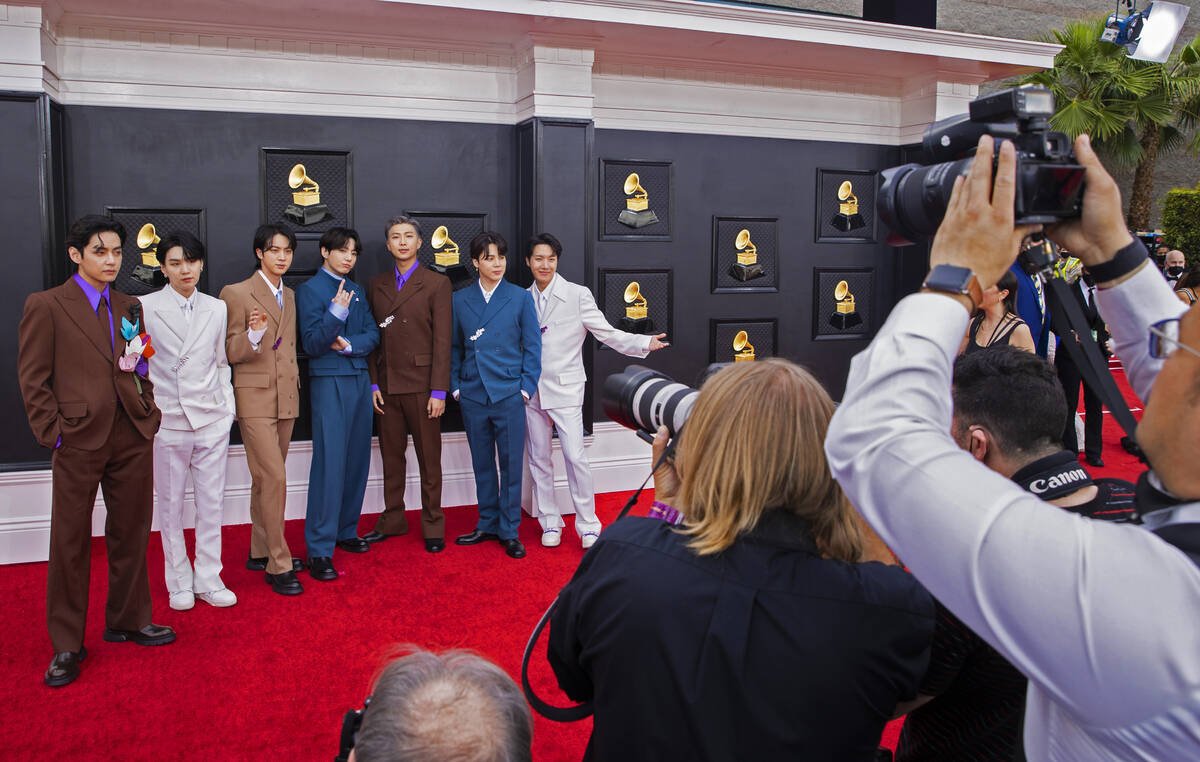 BTS on the red carpet before the start of the 2022 Grammy Awards on Sunday, April 3, 2022, at the MGM Grand Garden Arena , in Las Vegas. (Benjamin Hager/Las Vegas Review-Journal) @benjaminhphoto 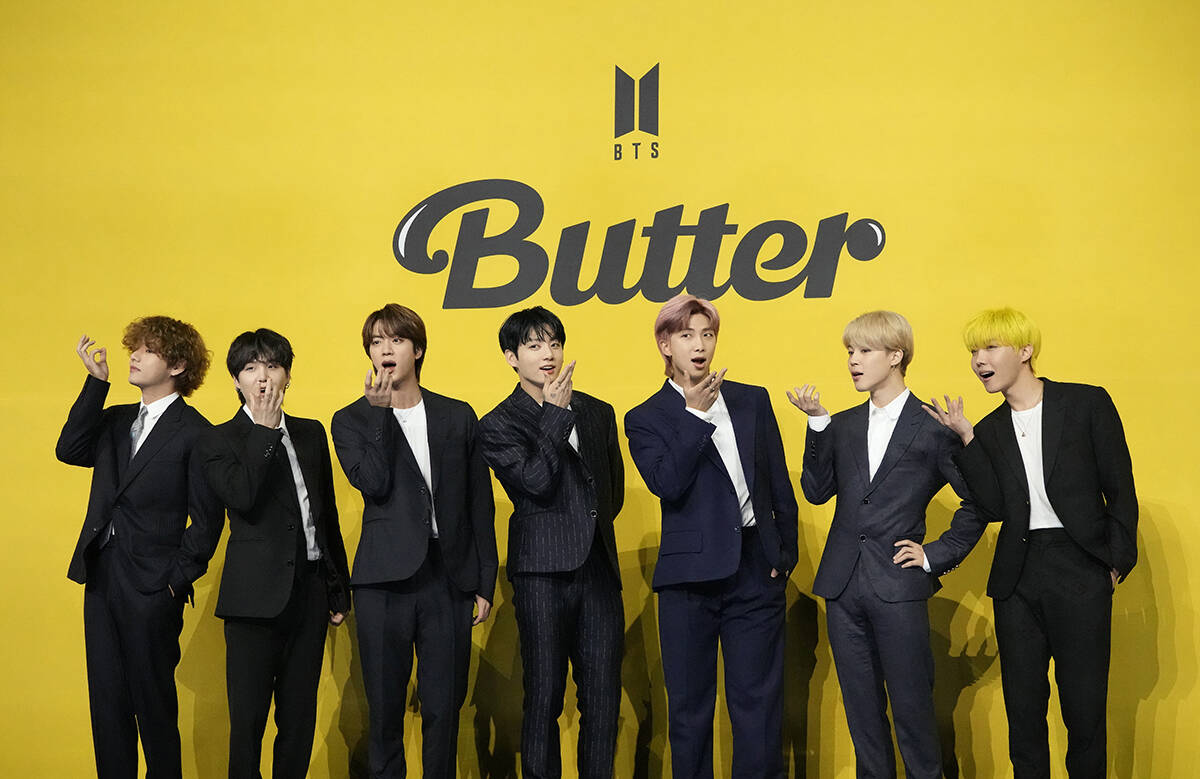 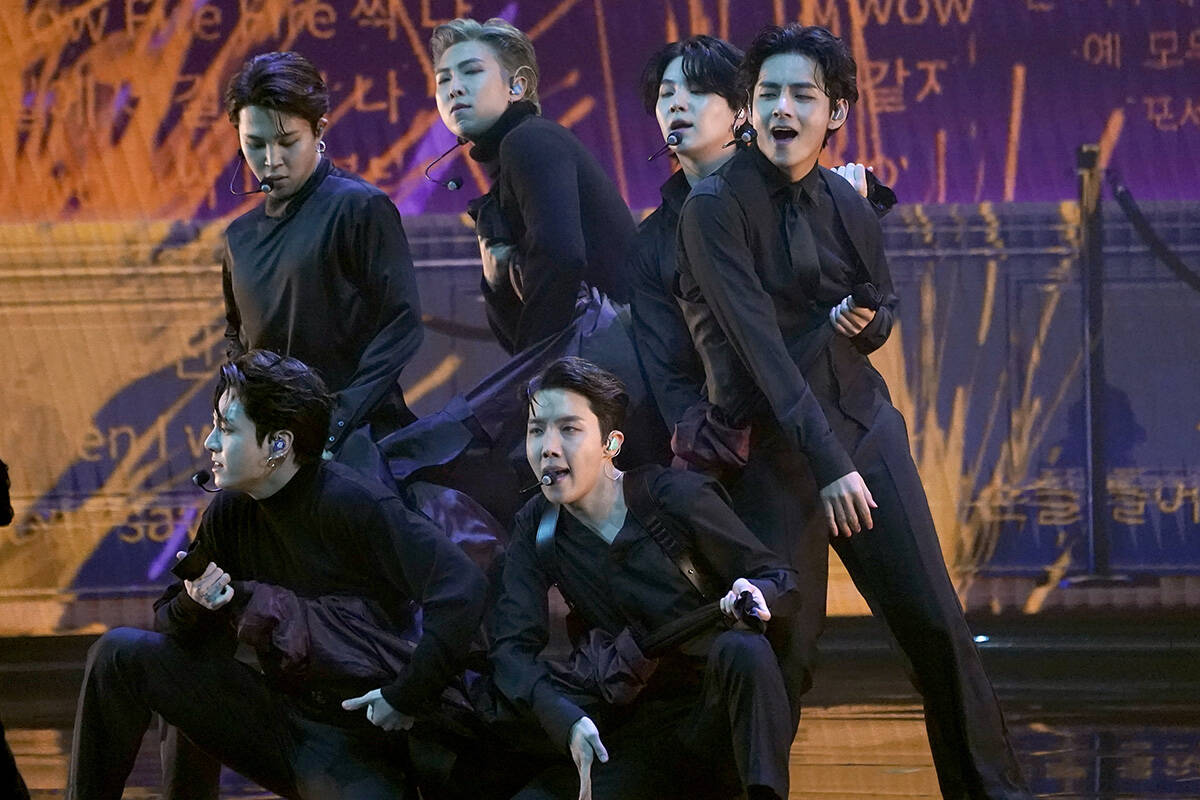 The Bulletproof Boy Scouts have come for us all.

You know them better as BTS, of course.

Or maybe you don’t know them at all, because you’re a corpse or a tire iron.

BTS stands for the Korean phrase “Bangtan Sonyeondan,” which translates to a nod to the aforementioned youth organization.

And bulletproof, they seemingly are.

The record-setting septet has taken K-pop to the masses with its open-hearted, insistently earnest, genre-jumping sound, which spans hip-hop, R&B, EDM, pop, touches of rock and Latin — just about anything with a hook in it.

The group consists of leader RM, oldest member and mentor Jin, rapper Suga, dancer/rapper J-Hope, singer/dancers Jimin and V, and the youngest of the group, Jungkook.

Together, they have become a phenomenon, selling out four shows at Allegiant Stadium through fan club pre-sales alone, before tickets ever even became available to the general public.

With BTS’ massive stint in Vegas upon us, here’s everything you need to know about the South Korean superstars:

It all began with something that no one ever needed.

A hip-hop cover of the Wham! hit “Last Christmas.”

Even the ghost of George Michael and whoever the other guy in Wham! was think that’s a bad idea.

Yet that’s where BTS got its start, dropping a rap version of the tune as part of a clutch of songs the group released on Soundcloud in December 2012.

But, hey, good things can come from not-so-good ideas, and 10 years after issuing a song that, in hindsight, seems about as necessary as snowshoes in Tehran, BTS has become the biggest music act in the world, recently ranked as the top global artist for 2021 by the IFPI (International Federation of the Phonographic Industry).

Beginning with the June 2018 release of its third Korean-language album, “Love Yourself: Tear,” BTS became the first act since The Beatles to earn three No. 1 albums on the Billboard Top 200 in the span of a year — as well as the first Korean act to top the chart.

The group’s 2020 single “Dynamite” was the first K-pop song to debut at No. 1 on the Billboard Hot 100 chart, with BTS joining Aerosmith and the Jonas Brothers as the only other bands to have a song land atop the chart its first week out.

In the group’s homeland, BTS is literally one of the engines of the national economy.

According to Forbes, the group accounted for $4.65 billion of South Korea’s gross domestic product in 2019, putting it on par with major conglomerates in the country like Samsung and Kia.

On the road, BTS is a juggernaut.

When tickets went on sale for the U.S. leg of its 2019 tour, they sold 300,000 seats at an average price of over $400 in minutes, crashing Ticketmaster’s servers, according to The Hollywood Reporter.

Basically, BTS is the King Kong of K-pop.

OK, but why are they so popular?

It can be like boot camp for the beautiful people, voice lessons and nose jobs in place of target practice and blanket parties.

And if you’re slightly less than beautiful, well, that can — and most likely will — be fixed.

In South Korea, not only is K-pop big business, it’s serious business.

For aspiring performers, the process often begins at “idol” training schools, where candidates undergo a rigorous regimen, honing their singing and dancing skills with an emphasis on perfecting their looks.

“The first, most important thing is their appearance,” Kim Min-seok, who runs a South Korean idol training center, explained in a 2016 interview with Vice magazine. “If a girl has a bad face and a good body, the problem can be fixed with plastic surgery.”

From there, the goal for an aspiring performer is to land a deal with one of the three major K-pop labels, who’ve turned the art of creating stars into a very specific, finely honed process that, while successful, can also engender a prefab feel for some of the acts that come out the other end of the meat grinder. (To be fair, the same could be said of the pro forma approach of creating teen pop stars on these shores).

What makes BTS unique is that while it, too, came from this world, the group also sought to rewrite some of its rules — and does so in its own penmanship.

Namely, the guys in BTS wanted to be themselves.

And so from the get-go, unlike many of their peers, they were allowed to write some of their own songs, craft their stage banter, as opposed to delivering canned lines between songs, and — crucially — shape their individual social media presences.

This has given them arguably their greatest asset: a sense of authenticity.

BTS’ social media footprint is staggering: In October 2020, it became the first act ever to top Billboard magazine’s Social 50 chart, which measures the social media engagement of music acts, for 200 consecutive weeks after demolishing Justin Bieber’s record of 163 weeks.

According to a report from news website Axios, during one three-month span in 2019, BTS accounted for over 400 million interactions on Twitter — four times more than then-President Donald Trump, who had the second-most interactions in that time frame.

A main reason why BTS is able to generate these numbers is that by injecting more of their own personalities into their online identities, fans connect more closely with them, which is amplified by how hands-on they are on their social media feeds, responding personally to their followers at times.

This has engendered an army of devotees — literally, BTS fans call themselves ARMY, short for “Adorable Representative M.C. for Youth.”

Speaking of which, how did Vegas play a role in their rise to stardom?

BTS was already a sensation when it came to Vegas in 2017 as the first Korean act to be nominated at the Billboard Music Awards, taking home the trophy for top social act.

But a backstage encounter would alter the course of BTS’ career on these shores.

At the awards show, they met rapper Desiigner, whom they would later collaborate with on the remix to their hit single “Mic Drop,” which would be produced by Vegas-based DJ Steve Aoki.

The song became a crossover hit in the States, debuting at No. 28 on the Billboard Hot 100, becoming the first Top 40 entry by a K-pop act.

The single would go gold and then platinum, making BTS the first Korean group to have a song certified in the United States.

What happened in Vegas, then, ended up taking over the world.