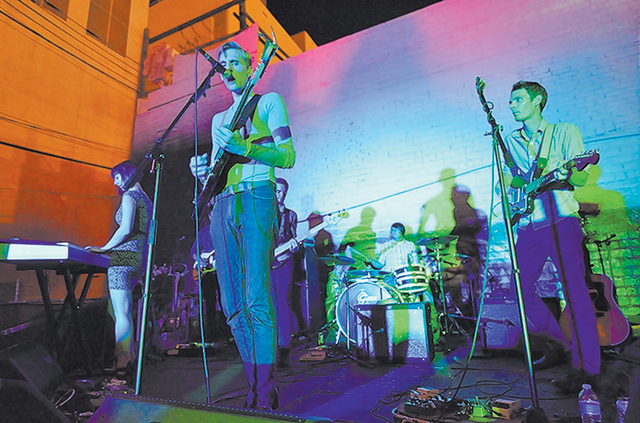 A Crowd of Small Adventures plays the Beauty Bar during the fall 2012 edition of Neon Reverb. (Courtesy)

Neon Reverb is more than a music festival. So much more.

The festival, which kicks off Thursday and runs through Sunday, is a vital part of the Las Vegas music scene. How vital? Well, in the past, some local acts have offered to pass on being paid, requesting that the proceeds instead be poured back into the festival to keep it going. Organizers didn’t oblige, but that’s how important it is to the scene. During Imagine Dragons’ set at Life Is Beautiful last year, frontman Dan Reynolds thanked the fest by name, expressing its importance and how he had hoped it would return someday.

“I want to say thank you to all the people who are putting in their heart and soul downtown to bring more culture to Vegas,” said Reynolds, acknowledging Neon Reverb and other local inspirations. “I can’t tell you how many people there are in this city that do so many things that are never ever told thank you for bringing that kind of culture to Vegas. That means so much to me, someone who was born and raised here, third generation. To see that culture means everything. Thank you!”

The three men behind Neon Reverb, Thirry Harlin, James Woodbridge and Jason Aragon, are worthy of such gratitude — Harlin, in particular, who founded the festival and has worked tirelessly to help make downtown the destination it is today. Harlin booked bands at the Bunkhouse for nearly a decade and managed the Beauty Bar at one time.

When the Bunkhouse comes up and the discussion inevitably turns to the series of changes the venue has undergone over the years, it’s likely the wistful ruminations you’ll hear about its most recent glory days are when Harlin was at the helm. Harlin is the one who dreamed up the festival and brought it to life in 2005. Fittingly dubbed the Downtown Music Festival, the weekend showcase devoted exclusively to local music was a fixture at the Bunkhouse until Harlin moved to Seattle.

By then, Woodbridge, who had moved to Las Vegas from Connecticut in 2006 to take a professorship at UNLV, had begun to immerse himself in the scene and started setting up shows on his own to help fill the void. When Harlin moved back a year later, the two joined forces on some shows and launched Neon Reverb not too long after.

This was right around the time that Vegoose, one of many music festivals to call Vegas home, ended its run. Sensing an opportunity, Harlin enlisted Woodbridge to help bring the Downtown Music Festival back to life, and the two set about coming up with a new name for the festival. That took some back and forth, Woodbridge recalls.

“I kept insisting that the name have ‘neon’ in it,” he remembers. “I would come up with lame combinations with ‘neon’ in it, and Thirry was like, ‘No, no, no, that’s awful. Finally he called me up one day and he was like, ‘All right, I’ve got it: Neon Reverb. It was perfect. It rolls off the tongue really nicely. It captures a lot about Vegas. We were like, ‘This is great!’ And then he created all this branding and artwork for it. He was a fountain of creativity instantly.

“We were basically like two guys with a bunch of fliers, who said we had a music festival,” Woodbridge remembers with a laugh, recalling how the inaugural edition of Neon Reverb, as it had been rechristened in 2008, moved bar to bar rather than being scheduled like a traditional festival. “We didn’t have enough bands to make it a parallel showcase kind of thing. So each night, we made it like a pub crawl.”

Everybody immediately got behind Neon Reverb, and that was exactly what the founders had in mind. “Our whole point was we want to showcase the local music scene, the local venues, downtown in particular. We were like, ‘This is our city. This is where we do stuff. It’s cool. Hey, you should come in from out of town and check it out and realize there’s more to Vegas than the Strip.”

After the first edition, Harlin and Woodbridge realized they needed somebody with clear organizational skills. So they invited Jason Aragon into the fold. A longtime veteran of the scene who moved here from New Mexico, he’d already been actively promoting the festival as a performer. The three of them formed an LLC and began producing Neon Reverb twice a year after that, often paying out of their own pocket.

“We ran it every six months for a while with basically no sponsorships, just sheer force of will,” Woodbridge recalls. “Finally, a company took notice of what was happening — because it was getting decent press, and the local scene was really embracing it. But it was still just sort of DIY and just kind of street teaming everything. But one of the liquor distributors noticed it and became a sponsor. It was the first time anybody was going to give us money.”

With a modest infusion of funds, the organizers grew the festival significantly, bringing in headliners such as the Walkmen, which helped attract other bands and fans. “It put the festival on the map regionally,” Woodbridge points out. “And more businesses wanted to get involved to help us out. Everything really came together in the fall of 2010.”

Inspired by a kindred interest in cultivating the cultural offerings downtown, Zappos is one of the companies that signed on as a sponsor. Things steadily progressed. The festival’s footprint increased, with sets spread out in various spots across the city, but then the momentum started to stall. With other festivals emerging, attracting sponsors became challenging.

That, coupled with the departures of Harlin and Woodbridge, who both stepped away to focus on other endeavors, seemingly sealed the fate of Neon Reverb. After scaling the event back and producing it himself one last time, Aragon moved on in 2013, and the festival was filed away as fondly remembered.

“Given how crazy it was when there was three of us doing it, when he was trying to do it on his own it was completely unmanageable,” says Woodbridge now in reflection. “He scaled it down in order to have it be something he could manage, but even that was just too exhausting to try to make something like that happen.”

Like Aragon, Corso, who’s also been an active member of the scene since settling in the valley in the mid-’90s as a musician and recording engineer, played at Neon Reverb early on. Like others in the scene, he recognized the pivotal role the fest played and wanted to see it resurrected. “It’s something that I’ve wanted to see happen for a long time,” Corso says. So every time he bumped into Woodbridge at shows, he asked him what it would take for the festival to come back.

Corso’s pitch must have been convincing. Soon, Woodbridge was taking meetings with Henry and Mark Rowland of Downtown Project, and next thing you know, the band was back together. The guys have real money to work with this time around, as evidenced by this year’s lineup, which miraculously came together in a mere matter of months thanks to efforts of the entire team, each experienced promoters who worked together on everything from locking in the local acts and deciding on the headliners, which Henry pitched in to help land. (There are also several comedy acts set at El Cortez on Friday night that Woodbridge helped corral; visit neonreverb.com for the festival’s full roster of acts.)

Needless to say, it still takes a village to pull this whole thing off, and everybody’s doing their part, excited about the return and the prospects. “I feel the excitement of when we first started doing this,” Aragon says. “I feel the community coming back together and getting behind a community-run event.”

“The response has been incredible,” Corso adds. “The locals have just really, really blown this thing up. If you search ‘Neon Reverb’ on social media and see how many people are sharing posts and excited about it and talking about it, it’s really gratifying, even before it happens.”

Can’t get a more resounding endorsement than that.

“What we’re trying to do is act like it never went away, pick up where it left off and continue that organic growth that it was experiencing before,” Corso says. “If it grows in the same way that it grew between 2008 and 2012, I’m really excited to see where it will be four years from now.”

“When we started,” Woodbridge concludes, “the idea of doing something big downtown was sort of preposterous. It was like, ‘You can’t make that happen.’ So we just had to make it happen on its own.”