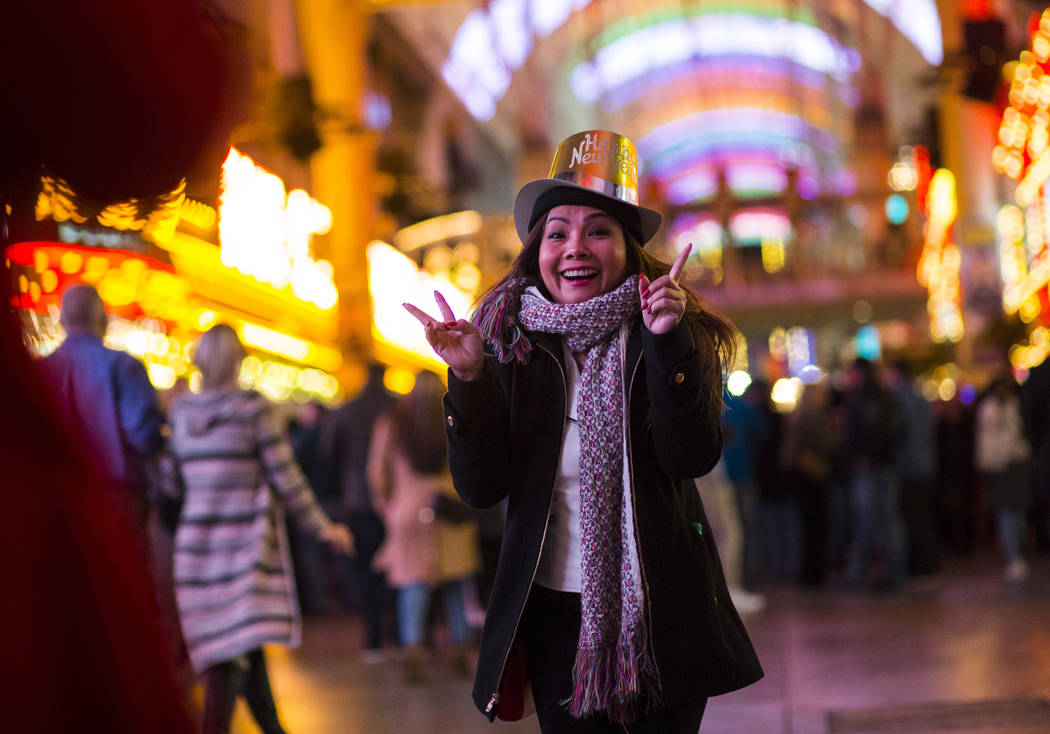 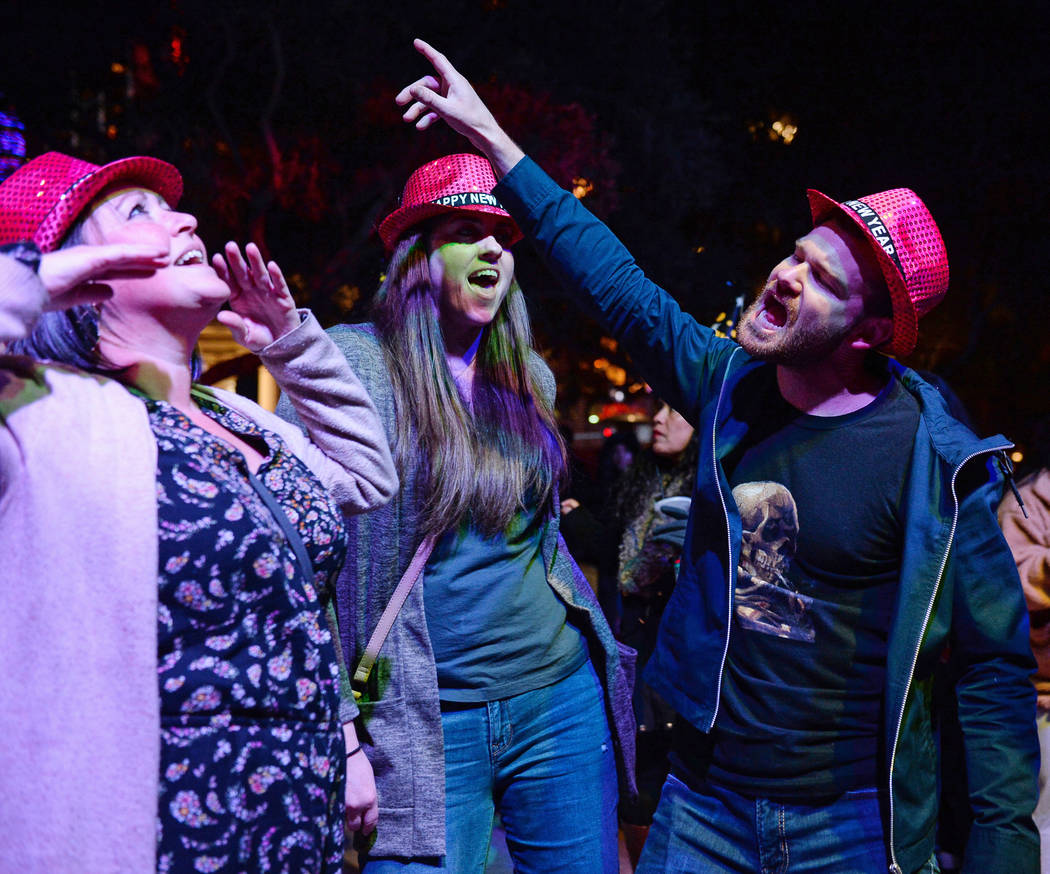 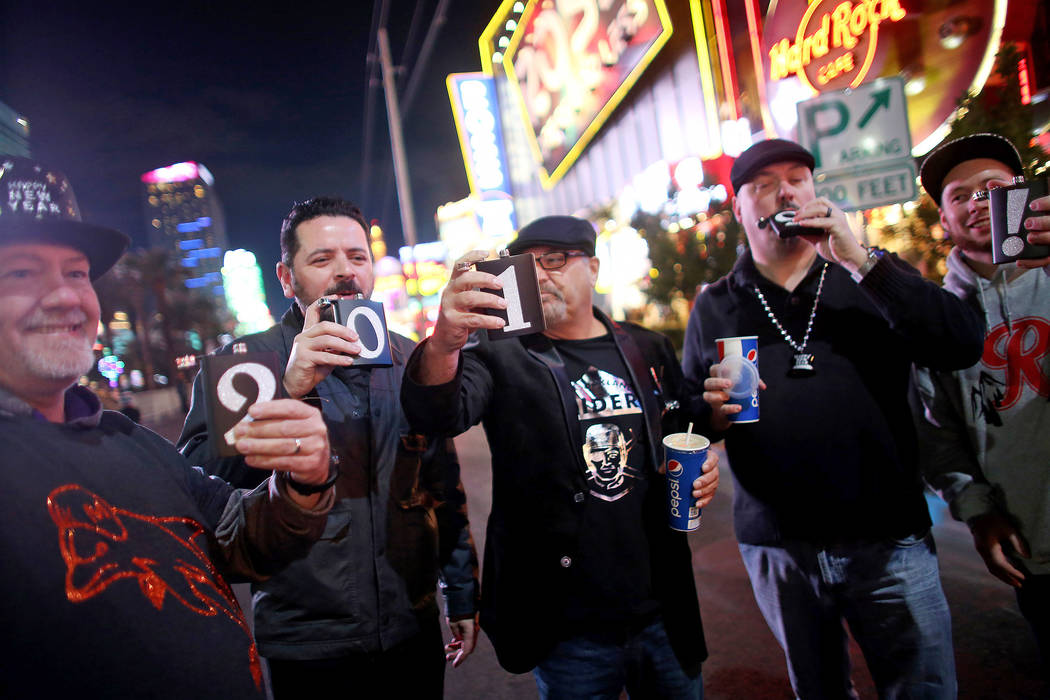 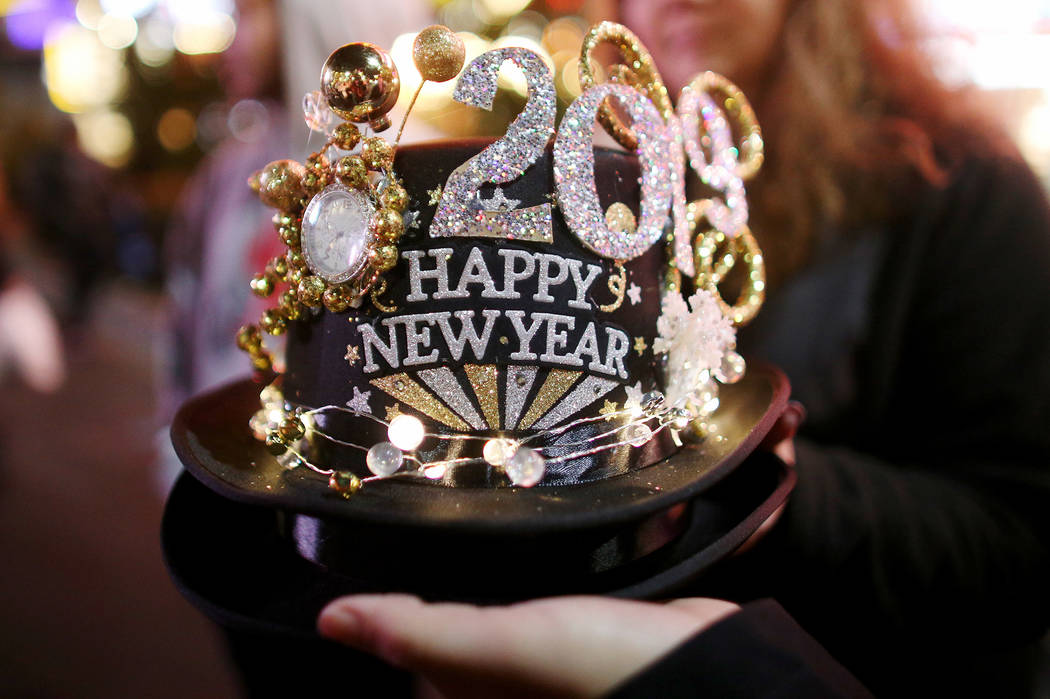 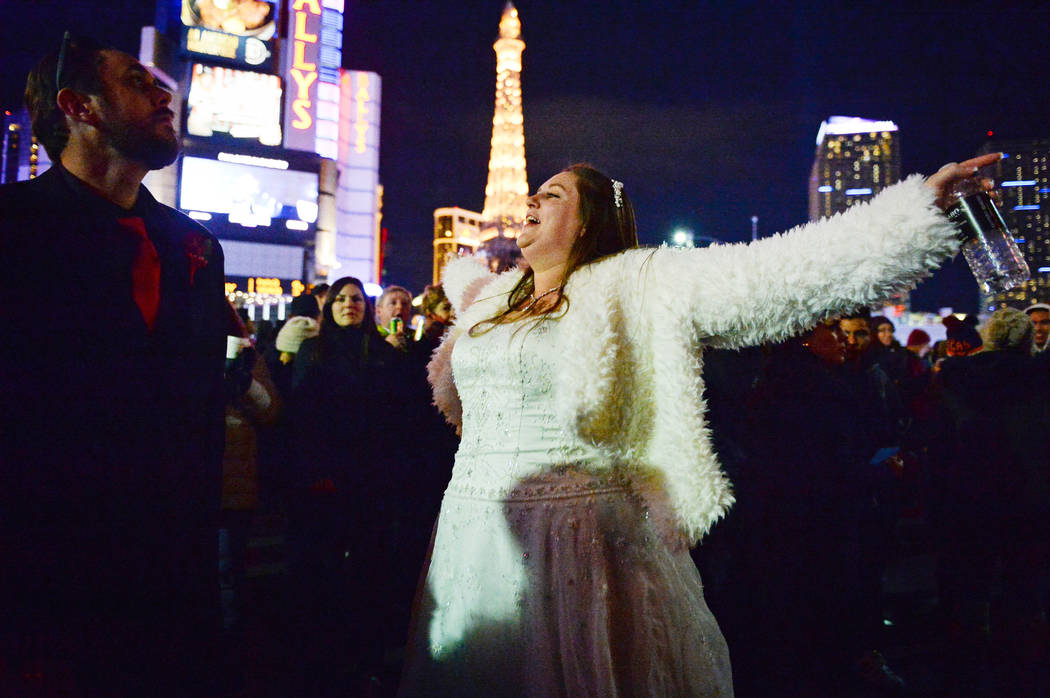 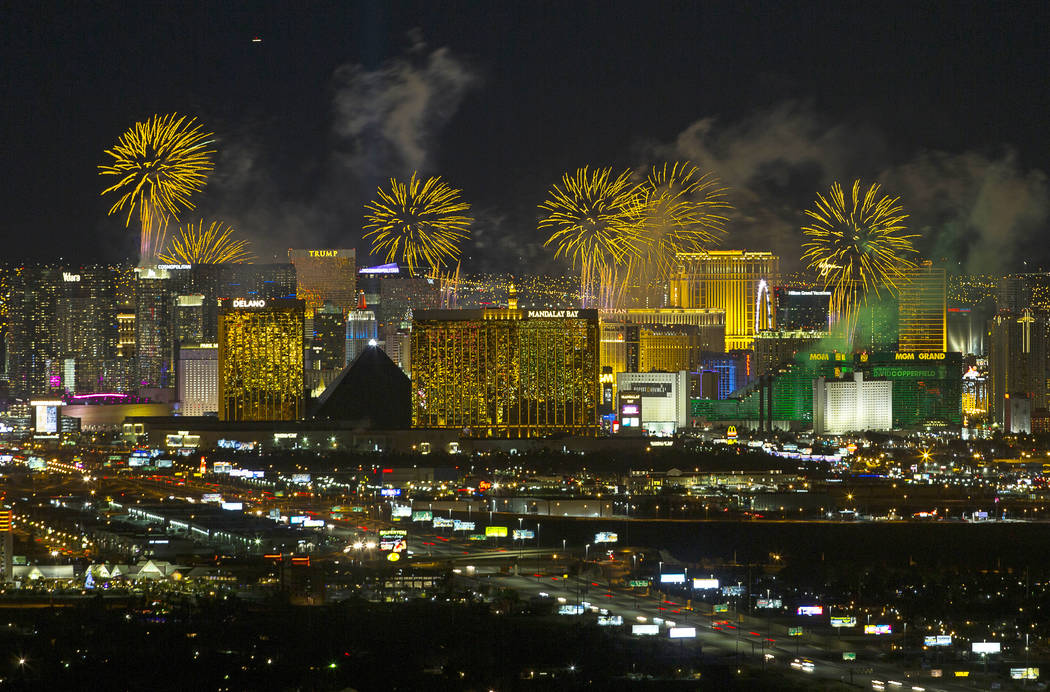 Chilly, gusting air descended on the Strip as the clock ticked toward 2019, but the weather couldn’t crash “America’s Party.”

For the 19th consecutive year, fireworks glittered in the night skies, after brisk breezes threatened the launch of 80,000 pyrotechnics.

Strip celebrations were expected to draw a crowd of 375,000 locals and visitors. Among the visitors were newlyweds Katie and Sean Trammell from Atlanta, who tied the knot in typical Vegas style at the Flamingo just hours before the start of the new year.

Sean Trammell, left, and Katie Trammell from Atlanta kiss on the Strip after marrying in Las Vegas on Monday. Caroline Brehman/Las Vegas Review-Journal

“If we were going to get married, why not do something that we’ll never forget?” said Sean Trammell, grinning alongside his new bride.

Some celebrated the end of 2018 with a first-time visit to Las Vegas, like the Nocum family from the Philippines, who posed for pictures by the colorful waterfall outside the MGM’s The Park, and the Cole sisters from Canada, who, wearing tiaras that said “Happy New Year” in French, asked a Metropolitan Police Department officer to take their photo.

Others, like Ohioans Dennis and Cindy Hartman, were regulars — though Monday marked the couple’s first New Year’s Eve celebration in Las Vegas.

“We wanted to do it at least once,” Cindy Hartman said.

Tourists huddled by fires for warmth as temperatures dropped into the 30s. With windchill factored in, temperatures were expected to feel like they were in the 20s, according to the National Weather Service.

But a group of women from Wisconsin, apparently unfazed, walked down Tropicana Avenue barefoot in what, to them, was relatively warm weather.

In characteristic Las Vegas fashion, glitter and gold decorated the Strip. Some people carried purses in the shape of gold wine bottles, while others sported silver, sparkling headphones.

At the intersection of the Strip and Harmon Avenue, Jim Grabowski twirled his wife, Dena, through the streets. The Michigan couple danced to Elvis Presley’s “Hound Dog,” as Dena Grabowski’s sparkly silver fringe dress swayed. As the song came to an end, they kissed.

“Our goal this year is to have more fun, be healthy and love life,” Dena Grabowski said.

Just a few miles north, revelers roamed the Fremont Street Experience, where live music roared and zip liners cruised under the street’s neon canopy. About 40,000 people were expected to populate the downtown stretch.

Among the crowd: Brandon Vanvactor, 37, Bob Crosby, 44, and Byron Guerra, 42, friends from South Bend, Indiana, who took to the streets in colorful sport coats decorated in polka dots, comic-book catchphrases and a mishmash of squares and rectangles straight out of an ’80s flick.

“We like to stand out. I’m not going to lie,” Vanvactor said in between photos with strangers. “We should have made a hashtag.”

Others, like Ignacio Perez and Jordan Burns, took to Fremont Street for a more locals-friendly experience. Standing outside Evel Pie, beers in hand, the lifelong Las Vegans shared their New Year’s resolutions: Perez, 26, would take a shot at going to college, while Burns, 23, said she wanted to draw closer to God.

“I know, I’m, like, drinking,” she said, laughing and nodding toward the Bud Light Lime in her hand.

As the clock neared 9 p.m., a sea of people filled the Fremont Street Experience plaza between the D Las Vegas and Four Queens.

Counting down from 10, the crowd cheered, hoisting drinks and illuminated cellphones to ring in the new year with New York City and the rest of the East Coast.

People gather to watch the fireworks go off for the New Year as seen from Drai’s Nightclub on the Strip in Las Vegas, Tuesday, Jan. 1, 2019. Caroline Brehman/Las Vegas Review-Journal

More than 1,500 Metro officers, some in plainclothes, were expected to patrol the Strip and Fremont Street on Monday night, joined by members of the FBI and the Nevada National Guard, Sheriff Joe Lombardo said at a news conference Thursday.

The event was designated a Special Event Assessment Rating 2, or SEAR 2, Lombardo said at the news conference, a designation that would bring air assets, dogs, federal agents and radio systems to the city. It was a step down from 2017’s SEAR 1 rating in the wake of the Oct. 1 shooting, which left 58 concertgoers dead on the Strip.

The Las Vegas Convention and Visitors Authority expected a 3 percent jump in tourism this New Year’s Eve, from last year’s 309,000 to 318,000 this year.

Police presence was palpable Monday night on the Strip. Officers lined the center of Las Vegas Boulevard behind barricades, some carrying rifles. Other officers were visible overhead on buildings and walkways.

Buses and trucks blocked access to the celebration from cross streets.

“The cops seem to have crowd control under control,” she said.

Setup for the fireworks show began Friday by Fireworks by Grucci, which coordinates the New Year’s Eve pyrotechnics in Las Vegas. Fireworks were to be launched from seven rooftops across the Strip.

But sustained winds between 10 and 15 mph threatened to put a wrench in those plans for the first time.

In anticipation of high winds, the Pahrump Firewooks Shooter Site closed just after 5 p.m. Monday, according to a post on the Town of Pahrump’s Facebook page.

Roads began closing around 5 p.m. Monday around the Strip in preparation for the celebrations. By 6 p.m., Metro shut down all streets leading onto the Strip between Sahara Avenue and Mandalay Bay Road, with traffic cleared shortly after.

Walkways, elevators and escalators were set to close at 7 p.m. and reopen by 12:15 a.m., with celebrations expected to subside by 1:30 a.m. Street sweepers were to begin cleaning Las Vegas Boulevard from south to north at 2 a.m.

The Interstate 15 offramps to eastbound Flamingo Road, Tropicana Avenue and Spring Mountain Road and all other streets leading onto Las Vegas Boulevard were set to begin reopening around 3:30 a.m. Tuesday. 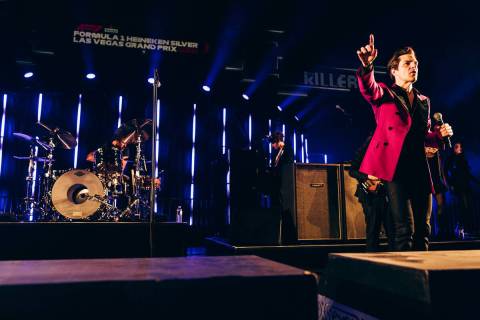 The Killers play Vegas for the fourth time in 2022, ending the year at the Chelsea at the Cosmopolitan. 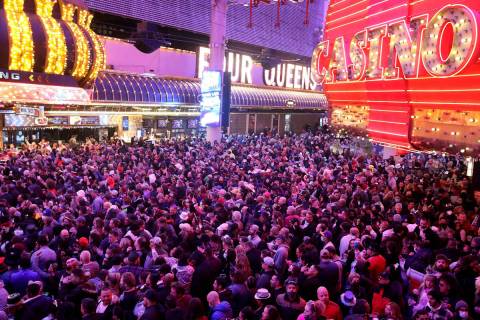 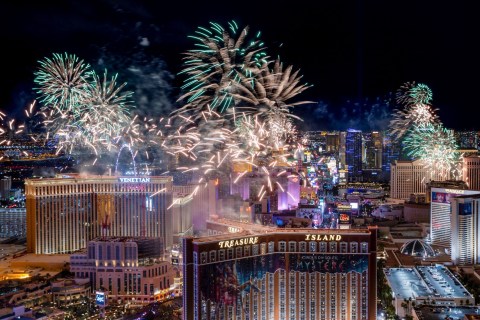 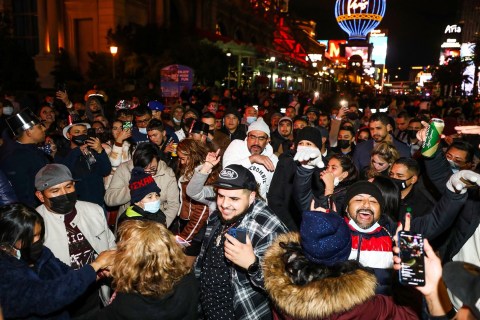 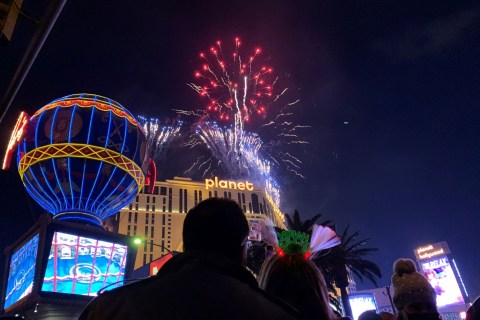 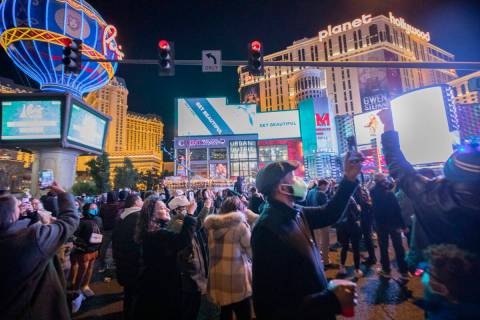