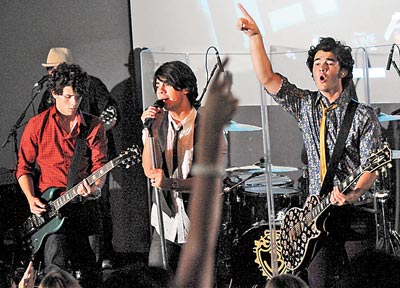 The air was thick with exhaust fumes and anticipation. The young girls had been standing there all day long, awash in glitter and hand-crafted signs on brightly colored poster board, all of them shrieking like they had just seen a ghost. It was a mid-October night in the Planet Hollywood Resort parking garage, just outside the Theatre for the Performing Arts, where Justin Timberlake was about to kick off a benefit concert for the Shriners Hospitals. But the bubbly tweens, whose volume rivaled that of a jetliner at takeoff, weren’t there to see JT. Instead, they were there to try and catch a glimpse, a glance, one single, solitary, oh-my-god eyeful of the Jonas Brothers, who also were performing that evening.

The three freshly scrubbed, New Jersey-born siblings have turned millions of teen hearts into pinatas, weakening the knees of kid sisters the world over.

"The fan reaction is just absolutely overwhelming at times," says Nick Jonas, the youngest of the trio, during a break from shooting the brothers’ Disney Channel show "J.O.N.A.S!" "You definitely want to get up every day and go play concerts, because the response is just electric.

"I think it’s all about taking it in stride," he adds. "We’ve lived through some crazy experiences this past year and a half and seen some pretty amazing things."

Just nine months ago, the Jonas Brothers were ensconced on their first headlining tour, hitting the Planet Hollywood Theatre for the first time and packing the 7,000 seat venue.

Now, they’re doing two shows at the MGM Grand Garden arena, a hall twice the size, they’ve notched one of the biggest selling albums of the year with their third disc, "A Little Bit Longer," they filmed a made-for-TV movie with more to come, they’ve shot a concert film and they have their own series on the Disney Channel.

It’s a long way from where the brothers were just under two years ago, when the band was dropped from Columbia Records after their slow-selling debut, "It’s About Time," failed to find much of an audience.

"I think we’re all so grateful that we had the times when no one really cared about our band or us or anything, because it really showed us that side of it as well and how it’s so important to love it because of the music and playing live," the 16-year-old says. "Seeing that and knowing what that’s like always just makes you want to do it more."

With their young fan base and telegenic air about themselves, it’s easy to lump the Jonas Brothers in with the crowded boy band ranks as the heirs to acts like ‘N Sync and O-Town.

But unlike many of their pre-fab counterparts, the brothers actually have a solid musical pedigree. They write or co-write most of their tunes, produce some of their own material and are skilled at a variety of instruments.

With layered harmonies and a doe-eyed earnestness — the brothers all wear promise rings denoting their commitment to not engage in premarital sex — the band’s catalog is a bit more substantive, more organic than the market-tested pop of some of their peers.

"I think the similarities are in the fan reaction," Jonas says of being included into the boy band set. "We do write our music — that’s a major thing for us — and we’re part of the production of our albums nowadays."

For Nick, who was first discovered at the age of 6 while singing in a barbershop and was performing on Broadway a year later, it’s already been a decade onstage, in the spotlight.

He’s come of age in front of the camera’s glare, and hearing him speak, it’s as if he sprung from the womb with microphone in hand.

"We definitely hoped that we would have this kind of success and dreamed about it, but to see it happen has been really amazing," he says. "We’re loving what we’re doing."

And as all those girls in the parking garage can attest to, the feeling’s mutual.