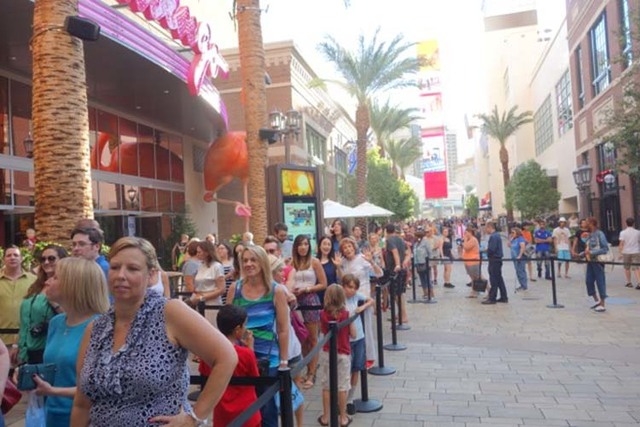 Internet sensation Grumpy Cat was greeted by a large crowd for her book tour stop at Kitson at The Linq. The line stretched out to the Strip. More than 500 fans were waiting when the doors opened at 6 p.m. (Norm Clarke/Review-Journal) 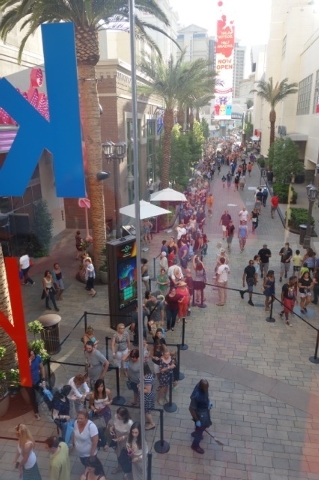 If you’re a fan of the reality show franchise “Million Dollar Listing,” chances are you’ll soon be seeing Realtor-to-the-stars Zar Zanganeh in the Las Vegas version.

Zanganeh, who was Michael Jackson’s Las Vegas real estate broker for three years, has signed a deal with World of Wonder Productions.

Zanganeh, who was born in Marbella, Spain, has lived in Las Vegas since 1999.

He has been a broker for the royal family of Brunei, Planet Hollywood headliner Britney Spears and Holly Madison, among others.

The faces have changed along Gucci Row.

But the name remains a fond memory of UNLV’s basketball glory years at the Thomas &Mack Center, where Team USA is being assembled for 2016.

Glusman wanted to make a grand statement so he went to Gucci at Fashion Show and talked management into providing 60-some Gucci handbags.

“I had ’em filled with popcorn and had some of my employees deliver ’em to everyone in the courtside seats.

“It was great publicity,” said Glusman, who still has four seats on Gucci Row.

Back then you would have seen Steve and Elaine Wynn, Irwin and Susan Molasky, famous boxers and many other members of the who’s who club.

Times change. One of the most familiar faces now is Austin “Chumlee” Russell of “Pawn Stars” fame.

Some of the biggest names in magic chipped in and bought the beloved Johnny Thompson, a mentor to many, a new Cadillac for his 80th birthday last week.

The car was pearl white with two bikini girls in the backseat.

Stuart Beck, a member of the props team for “Love,” the Cirque du Soleil-Beatles collaboration, tweeted a photo of Jillette, Siegfried Fischbacher and himself with the caption “Of course we didn’t tell Johnny we only leased it.”

Copperfield said Penn and Teller deserve all the credit for putting it together.

“Johnny’s one of the great guys in magic history,” Copperfield said.

A Polish-American from Chicago, Thompson worked the Strip for decades under the stage name “The Great Tomsoni,” with his wife, Pamela Hayes. In recent years he has been working behind the scenes for Penn and Teller, Burton and Criss Angel.

Thompson was honored with a second party at the Italian American Social Club on Sunday.

The waiting line Tuesday for Grumpy Cat’s book tour stop at Kitson in The Linq stretched all the way to the Strip. Fans began arriving at noon. By 6 p.m., more than 500 were in line.

“The annual Sturgis Motorcycle Rally starts Aug. 4. But times have changed. Now even biker gangs are into recycling. When the motorcycle rally is over, the gangs go around responsibly collecting trash, bottles, and broken teeth.” — Craig Ferguson