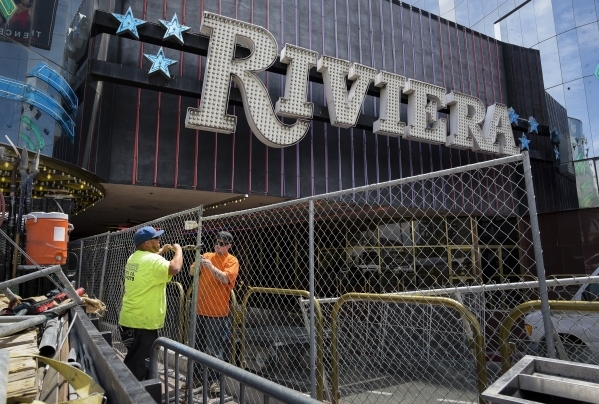 Almost four decades after his death, Elvis Presley is getting a street named after him in the city where he rocketed back to prominence.

With the upcoming implosion of the Riviera hotel-casino, Riviera Boulevard will be renamed Elvis Presley Way, she said.

It will start at Las Vegas Boulevard, cross Paradise Road and loop through the valet area of the Westgate, where Elvis launched his comeback in 1969 when Kirk Kerkorian opened The International. The name was later changed to the Las Vegas Hilton and the LVH before time-share king David Siegel bought the property in summer 2014 and renamed it Westgate, after his Florida-based company.

Siegel wants Elvis Presley Way to help market the hotel and the Elvis exhibit that was loaned to him by Graceland.

Giunchigliani said the Riviera sign at the intersection of Riviera Boulevard and Paradise Road will be removed.

“We’ll try to put it some place appropriate; maybe the (Neon) Boneyard will take it or some place along those lines,” she said.

I asked whether she could confirm the rumor that Siegel is planning to build a boutique hotel and a water feature in the 20-some acres in front of the building.

“I have not heard that,” she said.

Naming a street in Presley’s honor is long overdue. “The King of Rock ‘n’ Roll” had an eight-year run of sellouts in the 1,150-seat main theater. For years his official record of sold-out shows from July 1969 to December 1976 was listed as 837. But Graceland’s chief archivist, Angie Marchese, after researching Presley’s Las Vegas years, revised the number to 636 last year as Graceland’s partnership with Westgate was being worked out.

Las Vegas Review-Journal reader Joe Stanhibel, who has been pushing for the Elvis honor for some time, said the only two streets he found were Elvis Presley Court near Jones Boulevard and Grand Teton Drive and Elvis Alive Drive off state Route 157 near U.S. Highway 95.

This might be as close as Donald Trump and Hillary Clinton will get for some time. Their impersonators, that is. Trump and Clinton impersonators will be joined by Lady Gaga‘s doppelganger at tonight’s spoof/tribute of the Academy Awards at the Golden Nugget. The 90-minute red carpet entries start at 5 p.m. for the event, which is known as The Reel Awards. The Tribute Artists Convention runs from Tuesday through Thursday at the hotel.

Colorado native Jay Kornegay, head oddsmaker at the Westgate, was in New Orleans last week celebrating his 25th wedding anniversary with his wife, Pam. Still aglow over the Denver Broncos’ Super Bowl 50 win against the Carolina Panthers, Kornegay decided it was a good time to break out his Broncos shirt while strolling Bourbon Street and the French Quarter. “I can’t begin to tell you how much love I got. Even New England Patriots fans were congratulating me. It was just amazing.” But it wasn’t unanimous praise. One guy, said Kornegay, sniffed, “I thought the Bronco bandwagon was full.” Nope, responded Kornegay, “I broke both ankles getting on it.”

Feb. 22, 2008: Rita Rudner, one of Las Vegas’ most successful comedians, records her 2,000th Vegas show at Harrah’s for a PBS pledge drive special and comedy DVD. She began her Las Vegas run in 2000, moving to the city and rarely leaving to perform elsewhere. Feb. 23, 1857: Mormon missionaries who had struggled to establish a settlement at Las Vegas for two years receive a letter from leader Brigham Young summoning them back to Salt Lake City. They were plagued by poor crops, dissension and tough living conditions, and the fort is soon abandoned.

“Pope Francis stated that he did not think that Donald Trump is a true Christian because of Trump’s beliefs on immigration. I know you’re thinking. There goes the pope’s chance of being on the next season of ‘Celebrity Apprentice.'” — James Corden

— Norm Clarke’s column appears Sunday, Monday, Wednesday and Friday. He can be reached at 702-383-0244 or norm@reviewjournal.com. Find more online at www.normclarke.com. On Twitter: @Norm_Clarke