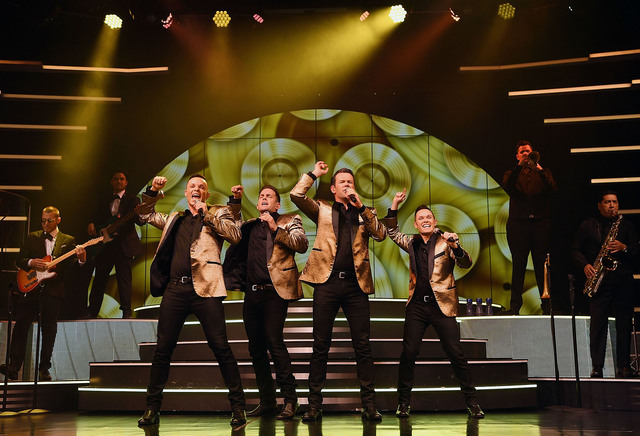 Austrailian pop vocal group Human Nature performs during the launch of their new show "Jukebox" at The Venetian. (Photo by Denise Truscello/WireImage)

If the real Backstreet Boys are headed to town, what happens to the guys who cover them?

Las Vegas has taken a very specific turn with its star entertainment. A new trend of limited-run concert residencies lets fans see everyone from Pitbull to Reba McEntire.

But where does that leave the vocal group Human Nature, which still tries to do a show that appeals to everyone, five days a week, for most of the year?

On the plus side, there are still plenty of people who don’t plan a trip around seeing Celine Dion. If you just want to hit town and then find something good to see, seven years of Human Nature have proved the Australian harmony group a solid alternative to circus and variety shows.

On the other hand, the quartet’s new “Jukebox” revue seems a little old-fashioned in this new marketplace. Even for a show that’s supposed to be old-fashioned.

Human Nature traded in its Motown-themed show for this wide-reaching overview of pop hits, from the ’50s to “Uptown Funk” (though weighted more to the former, thanks to its ’50s covers album, also called “Jukebox.”)

The four sing and syncro-dance their way through street-corner doo-wop and Rat Pack-Vegas standards, through Men At Work and Earth, Wind &Fire.

It’s a colorful, relentlessly busy showcase that puts even the seven band members into motion. When the stars are off changing their matching jackets, a ballroom couple — Jami Jones and David Oliveri — takes over to give “Jukebox” even more of a TV variety-show feel.

The visuals are pretty, the transitions seamless, and director and fellow Australian Wayne Harrison uses every inch of the small Venetian stage. But the Motown show did a better job of holding focus on what the four singers add to the classic songs: the chemistry of singing together for 26 years, since they were young teens, and by some medical miracle, none of them ever missing a show.

Repeat customers won’t miss more of the scripted joking or even the extra time once spent getting to know Toby Allen, Phil Burton and brothers Andrew and Mike Tierney. And they will get a kick out of seeing the four briefly harmonize on recent hits such as “All About That Bass” or “Shake It Off.”

“Jukebox” really takes off in a segment revisiting Human Nature’s roots as an Australian boy band. The lads try to keep up with their old dance moves as they work their way through New Kids on the Block’s “You Got It (The Right Stuff),” the Backstreet Boys’ “I Want It That Way” and ’NSync’s “Bye Bye Bye.”

Maybe the segment is just a sneak preview of the reductive way we’ll soon be saluting the boy bands in theme-park revues. The very way “Jukebox” treats its ’50s material, with the usual diner and drive-in cliches.

If ’90s nostalgia is fresh terrain, ’50s nostalgia comes with the challenge of making us hear oldies such as “Only You” as still alive and vibrant, not just ad jingles. The guys succeed a couple of times, sitting on bar stools to harmonize on “Earth Angel,” and mashing up “Stand by Me” with Sam Smith’s “Stay With Me.”

But more of it is truly a jukebox: instant access to a memory or feeling, and one where Allen’s bass rumble or the Tierneys’ soaring falsettos count for less than the instinctive response to “I Saw Her Standing There” or “La Bamba.”

Yes, it’s great that Human Nature is still the Las Vegas equivalent of our morning newspaper, our evening news. Our general-interest magazine in an era of micro-niche entertainment. And if the real Bruno Mars only visits now and then, these four gents will be mixing “Uptown Funk” with “Dancing in the Street” five nights a week.

But, for the first time, you feel like if one of the Human Nature singers gets the flu, the larger show will go on without him. The songs are bigger than any of them.