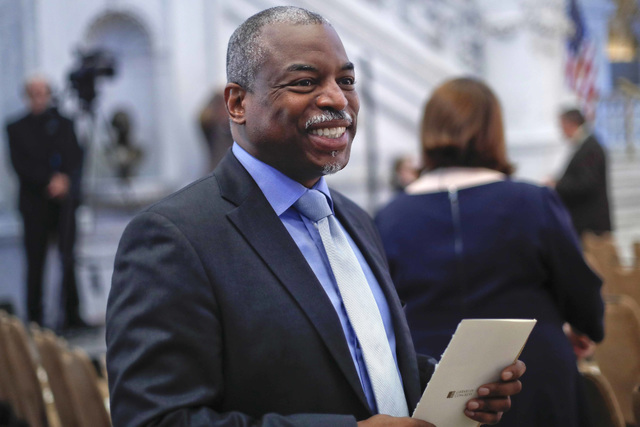 Actor, director LeVar Burton smiles as he takes his seat in the Great Hall of the Library of Congress in Washington. (Pablo Martinez Monsivais/AP)

MIAMI — Take a look, it’s in a book — and on a computer, tablet and phone: A “Reading Rainbow.”

More than three decades after the program to encourage reading among children first aired on PBS, the show’s longtime host, LeVar Burton, is now focusing his efforts to promote literacy in the digital realm.

“This gets us to more access,” Burton said. “Reaching every child, everywhere.”

“Reading Rainbow” was produced for television from 1983 to 2006 and became an iPad app in 2012. But Burton credits a successful 2014 Kickstarter campaign as a key point in the show’s revival.

“As a result of the Kickstarter, we were able to bring the entire library service over to the web and develop a product specifically for teachers to use in the classroom,” Burton said.

The 105,857 backers who pledged a total of $5.4 million through the crowd-funding site set a record at the time for the most individual contributors. Seth MacFarlane, the TV and movie writer-producer-actor whose credits include “Ted” and “Family Guy,” added another $1 million.

“It was really a people’s movement,” Burton said. “And that was pretty humbling to see in action how much people loved ‘Reading Rainbow’ and wanted to see it continue, wanted to see it go on and have a similar impact for a whole new generation of kids.”

As an actor who starred on seven seasons of “Star Trek: The Next Generation,” followed by four movies featuring the same character, Burton is a regular at science fiction conventions around the country, but he said many fans — both parents and children — want to talk about “Reading Rainbow” just as much as “Star Trek.” Burton’s next stop will be MegaCon Tampa Bay, which runs this Friday to Sunday. He’ll be there Saturday and Sunday.

The Reading Rainbow Skybrary is a subscription service that includes an interactive library of 1,000 digital books and 250 video field trips. The service was initially geared toward families, but the Kickstarter campaign funded the development of a program designed for teachers to use in their classrooms. The paid service includes 26 weeks’ worth of handouts, lesson plans and a teacher dashboard, and the Kickstarter contributions led to thousands of free subscriptions for needy schools.

Jennifer Evans, who teaches fifth grade at Rod Kelley Elementary School in Gilroy, California, has been using Skybrary School since last fall, before its official release earlier this year. She said it’s a great tool that allows her students to find books that interest them at their reading level.

“The best thing for me is that I feel like it’s good-quality literature,” Evans said “There are other programs on the market right now where it’s like one person wrote 300 books just because they wanted a specific (reading) level, and it’s not real authors writing real books. Skybrary is real published literature that is now in an electronic format.”

A variety of narrators, including Burton himself, read the books to the students while interactive icons and graphics move across the screen to help students get more interested, Evans said.

Despite the changes and updates to the new online version of “Reading Rainbow,” Burton said the core idea of bringing children and books together remains the same.

One of Burton’s first major television roles was in the 1977 mini-series, “Roots,” which was based on the Pulitzer Prize-winning novel by Alex Haley. The mini-series and book both tell the story of an African teen who was captured in the 18th century and sold into slavery in the United States. The show and book are widely credited with stimulating interest in African-American history.

“It was the ‘Roots’ experience that really showed me how powerful the medium could be to the purpose,” Burton said. “And so when the idea for ‘Reading Rainbow’ was pitched to me… the idea to do the counterintuitive, to use the medium of television to steer kids back in the direction of literature, it was fascinating to me.”

And that format still works for some teachers. Barbara Phillips, who teaches second grade at Monroe Elementary School in Monroe, Ohio, continues to show the old “Reading Rainbow” episodes to her students to supplement her lesson plans.

“Even though they’re not the best production quality, the content is still relevant to today,” Phillips said.

The simple, predictable format of the old episodes keeps children focused, Phillips said. And she pointed out the show’s iconic theme song is just as catchy as it was 30 years ago.

“There’s nothing like that ‘Reading Rainbow’ song,” Phillips said. “Even today’s kids, there’s something about that song that draws them in. The kids know that tune when it starts, and when it’s over, they’re humming and singing it.”

The new “Reading Rainbow” is still growing. A Spanish version of the program is being developed for next year, and a universal app is set to release next month, bringing the Skybrary from computers and tablets all the way down to smartphones.