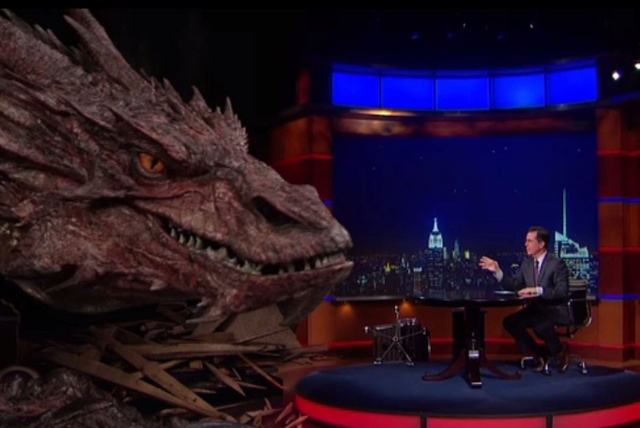 LOS ANGELES — With the last episode of “The Colbert Report” imminent, host Stephen Colbert is using his last few installments to go out with a bang — or in this case, a blaze of dragon fire.

Colbert, a noted Tolkien enthusiast who even had a cameo in “The Hobbit: The Desolation of Smaug,” sat down with the infamous fire-breather on Thursday’s episode to promote the upcoming release of “The Hobbit: The Battle of the Five Armies,” the final chapter of the trilogy, which bows Dec. 17.

“I want you to know that I am not intimidated by you, even though you have a reputation as a tough interview because you often eat the host,” Colbert told Smaug, who burst through the wall of Colbert’s set in all his CGI glory.

Benedict Cumberbatch, who voices Smaug in the films, lent his voice for the segment.

Smaug revealed that he blames “typical liberal Hollywood bias” for being cast as the villain in Peter Jackson’s trilogy. He also dissed fellow Hollywood dragons, including Toothless from “How to Train Your Dragon” and the trio on “Game of Thrones.” In a particularly meta moment, Smaug also got in a few jabs at “Sherlock,” co-star Martin Freeman and Cumberbatch himself.

To commemorate the Dec. 18 end of “The Colbert Report’s” nine-year run, Colbert tapped a batch of extra-special guests for his final episodes, including Smaug; President Obama, who appeared on the show earlier this week; and the Grim Reaper, who will be the show’s final guest. Comedy Central will air a “Colbert Report” marathon, including some of the show’s most famous episodes, on Dec. 18 from 10 a.m. to 11 p.m.

Colbert will take over “The Late Show” from David Letterman on an as-yet unspecified date in 2015.