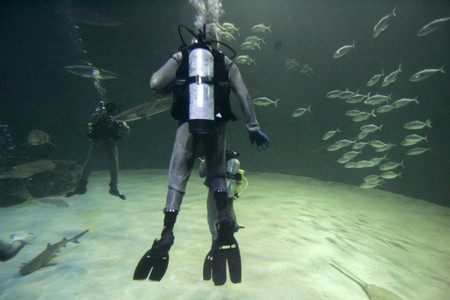 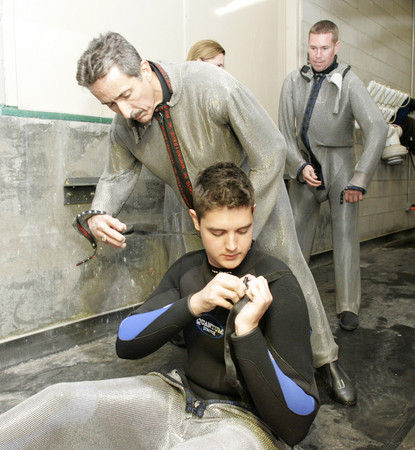 A guy’s preparation for a Las Vegas trip might involve some extra crunches for a poolside excursion or maybe a nice haircut and a new wardrobe for the nightclubs.

Not Robert Young, 23, and Jerry Fogel, 36. They got scuba certified and brushed up on their shark knowledge in preparation for doing something that only a few visitors qualify for: diving with the sharks at Shark Reef in Mandalay Bay.

Co-workers at Sonic Corp. in Oklahoma City, the friends paid $1,000 for the privilege of diving in the 1.6 million gallon aquarium, home to seven species of sharks, 30 individual ones in all. That’s in addition to the sea turtles, rays, groupers and other ocean life that live alongside the Great Barrier Reef sharks, tiger sharks and others. Individual divers pay $650.

“The only reason we got certified was to do this,” said Fogel, whose wife found the shark-diving opportunity while searching online. It’s open only to Mandalay Bay guests who possess a scuba certification.

Young resisted the idea, at first. It sounded too crazy, a little too edgy. He was easily swayed, though.

“I faced some peer pressure,” Young said, joking before donning 16 pounds of chain mail over his wet suit.

The outer layer would help protect them from unexpected nibbles. Both were excited and a little nervous before embarking on their 50-minute dive; it would be their first “real” dive.

Jack Jewell, Shark Reef curator, briefed them on what to expect when they got into the water. Jewell and a diving guide accompanied them. The original plan since the attraction opened in 2000 was for Shark Reef to have some kind of diving program, Jewell said. It just took a while to implement.

“I think it just does wonders for dispelling myths about sharks,” Jewell said of the program.

The guys were in very little danger from the sharks because they are generally not interested in people, Jewell noted.

Currently, a maximum of two guest divers are allowed at any one time, but officials hope to increase that.

The whole experience lasts three to four hours, starting with a behind-the-scenes tour of the aquarium, some training and the dive. All equipment is included.

Once in the water, some of the fish and sea turtles came to investigate Young and Fogel; a few sharks did, too.

The tourists dug in the sand for real shark teeth, which the two got to keep as souvenirs.

Afterward, they were still excited and a little dazed. Was it worth the time and money to get certified?

“That was awesome. Awesome,” Young said.

“The first thing I’m going to do when I get home is get a shark diver plate for my car,” Fogel added.

CARTOONS: These sharks are the most vicious