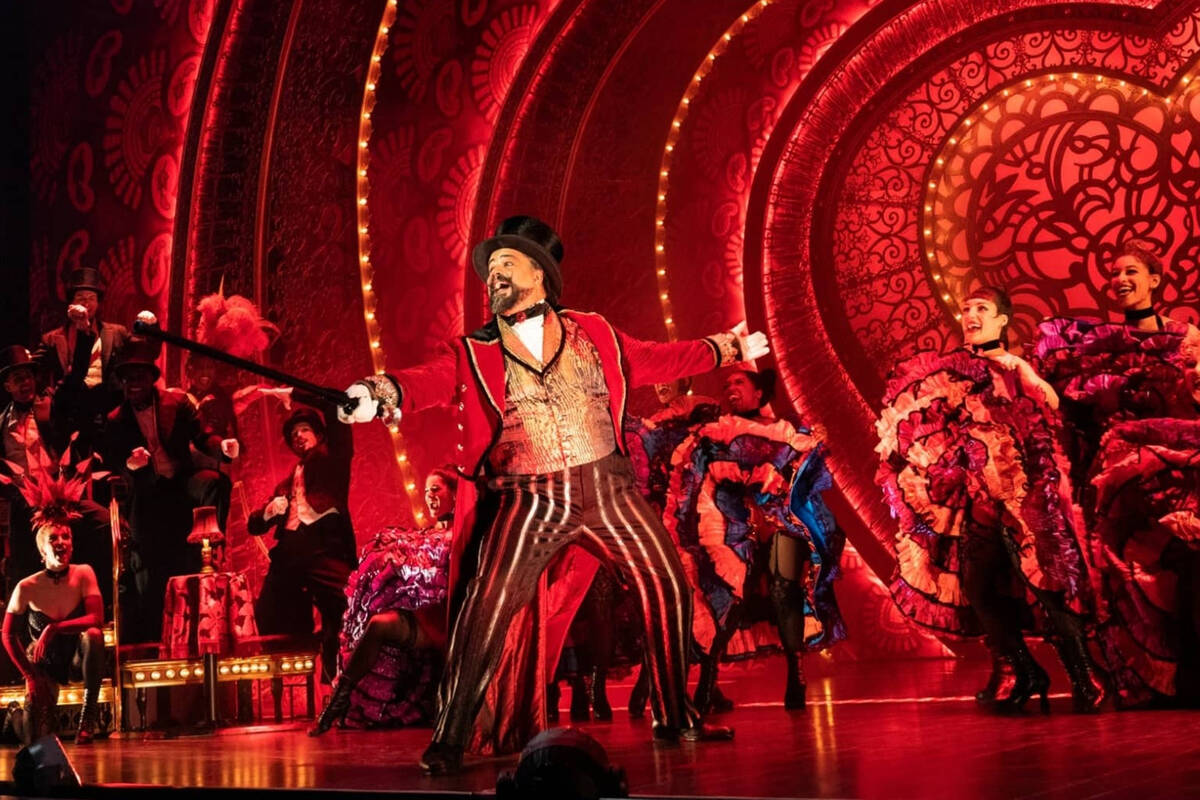 It’s the best time you could possibly have watching a Bohemian poet fall in love with a consumption-riddled sex worker at the turn of the 20th century while singing mashups of pop songs that wouldn’t be recorded for decades. Seriously. “Moulin Rouge! The Musical,” the stage adaptation of Baz Luhrmann’s 2001 film, is a musical tour de force that won 10 Tony Awards, including best musical. See it, if you can can can, at 2 and 7:30 p.m. Thursday, with additional shows through Feb. 5, in Reynolds Hall at The Smith Center. Tickets start at $35; thesmithcenter.com.

The “Atomic Dog” barks once more when funk prime movers George Clinton and Parliament Funkadelic return to Vegas. Still touring hard at 81, Clinton is like his band’s bass lines: absolutely indefatigable. Prepare to leave your seat and groove at 8 p.m. Saturday at the Westgate’s International Theater. Tickets start at $29.95; ticketmaster.com.

There was a time when, if you wanted to see David Blaine’s magic live, you had to hope to run into him on the streets of New York or someplace like Harrison Ford’s kitchen. But now he’s performing in the comfortable surroundings of the Resorts World Theatre with “In Spades,” his first residency show. See him there at 8 p.m. Saturday and Sunday. Tickets start at $55; axs.com.

If “angry robot music” is your thing — and really, how could it not be? — then dubstep DJ-producer Subtronics is not to be missed. With pyro-enhanced live shows and beats that register like a cannonball to the sternum, Subtronics’ maximum-impact EDM will either make you dance or duck for cover. See Subtronics at 6 p.m. Friday at the Downtown Las Vegas Events Center. Tickets are $49.50; dlvec.com.

What sentient being wouldn’t be up for a Dolly Parton-inspired country-western diva dance party? Rhetorical question there, as anyone into fun will want to hit up The Dolly Party, where Donna Summer meets Carrie Underwood, Tina Turner gets loose with Loretta Lynn, and much more. Experience The Dolly Party at 9 p.m. Friday at the House of Blues at Mandalay Bay. Tickets are $18; houseofblues.com/lasvegas.

This weekend (and all January), the Golden Tiki is serving the first of its monthly charity cocktails with a L’Carpetron Swizzle, a spin on the Trinidad swizzle featuring Zaya Rum, poppy seed amaro, velvet falernum, ruby red grapefruit, cinnamon and a spritz of absinthe. Cost: $16 or $35 with souvenir mug. A portion of the proceeds benefits the Nevada Partnership for Homeless Youth.

‘Candlelight: The Best of Hans Zimmer’

German composer Hans Zimmer is responsible for some of the most iconic film scores of the past four decades. Now, you can hear some of them — including portions of his Oscar-winning work for “The Lion King” and “Dune” — away from the theater, in a setting illuminated by candles. “Candlelight: The Best of Hans Zimmer” features a string quartet performing those works, along with music from “The Dark Knight,” “Wonder Woman,” “Gladiator,” “Pirates of the Caribbean,” “Inception” and others. Experience it at 6 and 8:30 p.m. Friday at the Industrial Event Space, 2330 S. Industrial Road. Tickets start at $35; feverup.com.

“The Green Flamingo,” a dance production based on David Pedemonte-Forte’s children’s book about being different, will be presented by Studio 305 and the Rolle Project. The nonprofit, founded by former Cirque du Soleil dancer and choreographer Tyrell V. Rolle, provides dance training and performance experiences to hundreds of children each year in North Las Vegas. See “The Green Flamingo” at 1 and 3:30 p.m. Saturday in the West Las Vegas Library theater, 951 W. Lake Mead Blvd. Tickets are $25; showtix4u.com.

Actor, comic, singer, improv master and “Let’s Make a Deal” host Wayne Brady returns to town this weekend. We became a fan during Brady’s time on “Whose Line Is It Anyway.” He also captured the second-season championship of “The Masked Singer.” Brady’s days in Vegas go back to the mid-1990s at the MGM Grand Adventures theme park. He also headlined the Sands Showroom at The Venetian in “Makin’ It Up” from 2007 to 2010. Brady can sing it, dance it, joke about it and take on any suggestion from the crowd. Catch him at 10 p.m. Saturday at the Mirage Theatre. Tickets start at $39.99; ticketmaster.com.