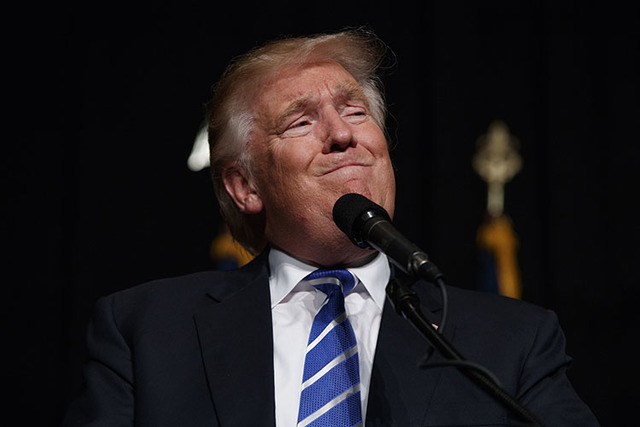 NEW YORK — Donald Trump pulled off the upset — at least in television popularity.

Hillary Clinton’s acceptance speech at the Democratic National Convention was seen by 29.8 million people on the commercial networks, the Nielsen company said Friday. That fell short of the 32.2 million people who watched Trump speak to the Republicans a week before.

Trump, who used to carefully watch television ratings during his days as star of “The Apprentice,” immediately boasted about the victory during a campaign appearance Friday in Colorado Springs, Colorado.

“We beat her by millions on television. Millions!” he said. “Honestly, the numbers were incredible.”

Although Trump has been a proven ratings draw throughout his campaign, the Democratic convention had proven more popular with viewers than the Republicans for its first three nights. Stars like Alicia Keys, Katy Perry, Lenny Kravitz and Paul Simon performed for the Democrats, and President Barack Obama, first lady Michelle Obama and former President Bill Clinton showed off their oratorical skills.

Meanwhile, star power was much dimmer at the Republican meeting. One night, the convention even ended 15 minutes earlier than planned, leaving television networks scrambling to fill time.

But viewers turned up to hear Trump: his audience was watched by 9 million more people than it was for any other night of the Republican convention, Nielsen said. Meanwhile, the Democrats actually had slightly more viewers for the first night of its convention than it did for the nominee’s speech, typically the highest-rated night of convention coverage.

Nielsen’s count did not include PBS’ commercial-free coverage, which made the margin closer. PBS said its viewership for Clinton’s speech was 3.91 million people, and 2.75 million the week earlier for Trump.

Fox News Channel went from first to worst during a tumultuous two weeks that included the resignation of its chief executive, Roger Ailes, on the day Trump spoke. An estimated 9.4 million people watched Trump on Fox, the most popular network for Republicans, and Fox took out newspaper ads touting its first-place finish among those covering the convention.

Just over 3 million people watched Clinton on Fox. Perhaps sensing its audience’s level of interest, Fox showed fewer live events from the convention floor than its rivals, preferring discussions hosted by anchors Bill O’Reilly and Megyn Kelly. Sean Hannity was brought in for analysis immediately after the convention closed each night.

Meanwhile, it was a coup for CNN, whose 7.51 million viewers topped all of the networks Thursday by a comfortable margin. This convention marked the first time the cable network beat the broadcasters in head-to-head competition. The relatively newsy events appeared to benefit the networks that followed them throughout the prime time hours, as opposed to ABC, CBS and NBC, which came on at 10 p.m. ET each night.

MSNBC was seen by 5.27 million, NBC had 4.52 million, ABC had 3.85 million and CBS had 3.65 million, Nielsen said. It was measuring the time all of the networks competed head-to-head, from 10 p.m. until the convention’s close.

For politicians, the true measure of the speech’s effectiveness will come in about a week, when polls indicate whether or not the convention gave Clinton a bump in popularity.