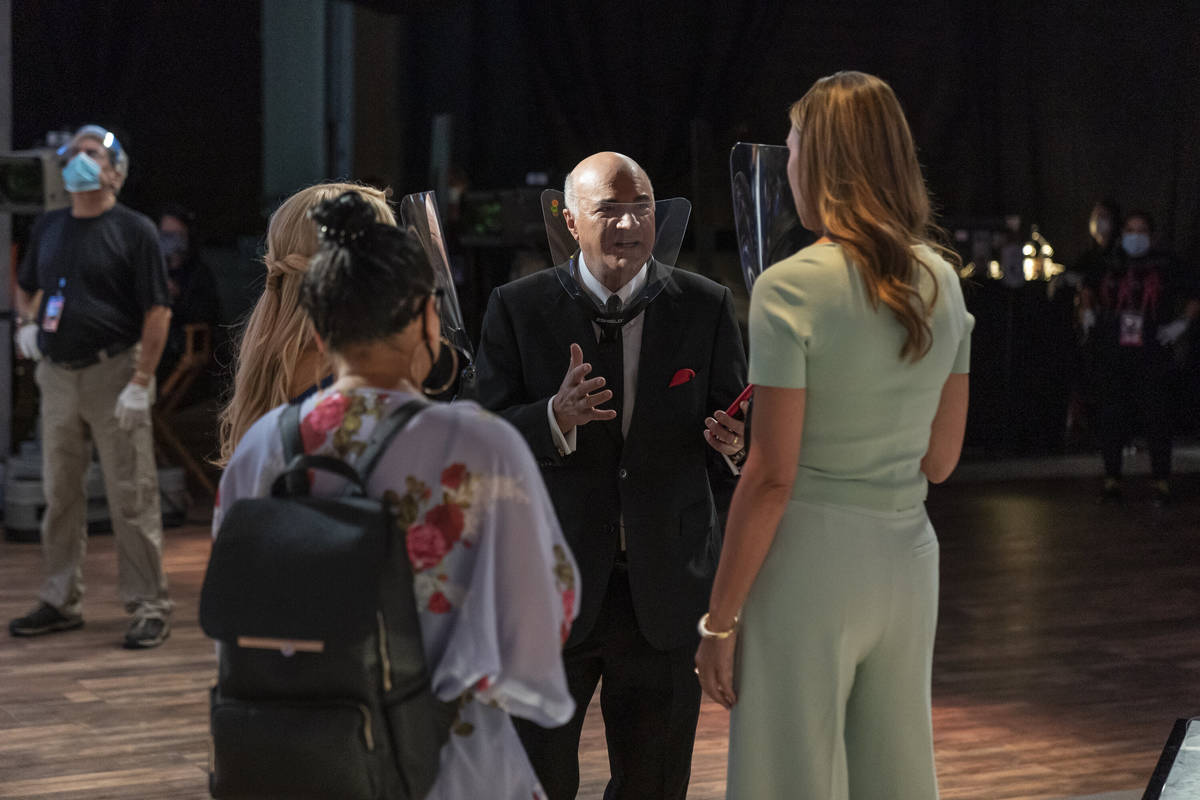 Shark Kevin O'Leary talks with members of the "Shark Tank" production, all of whom are wearing PPE, in between filming sessions at The Venetian. (Christopher Willard/ABC/Sony Pictures Television) 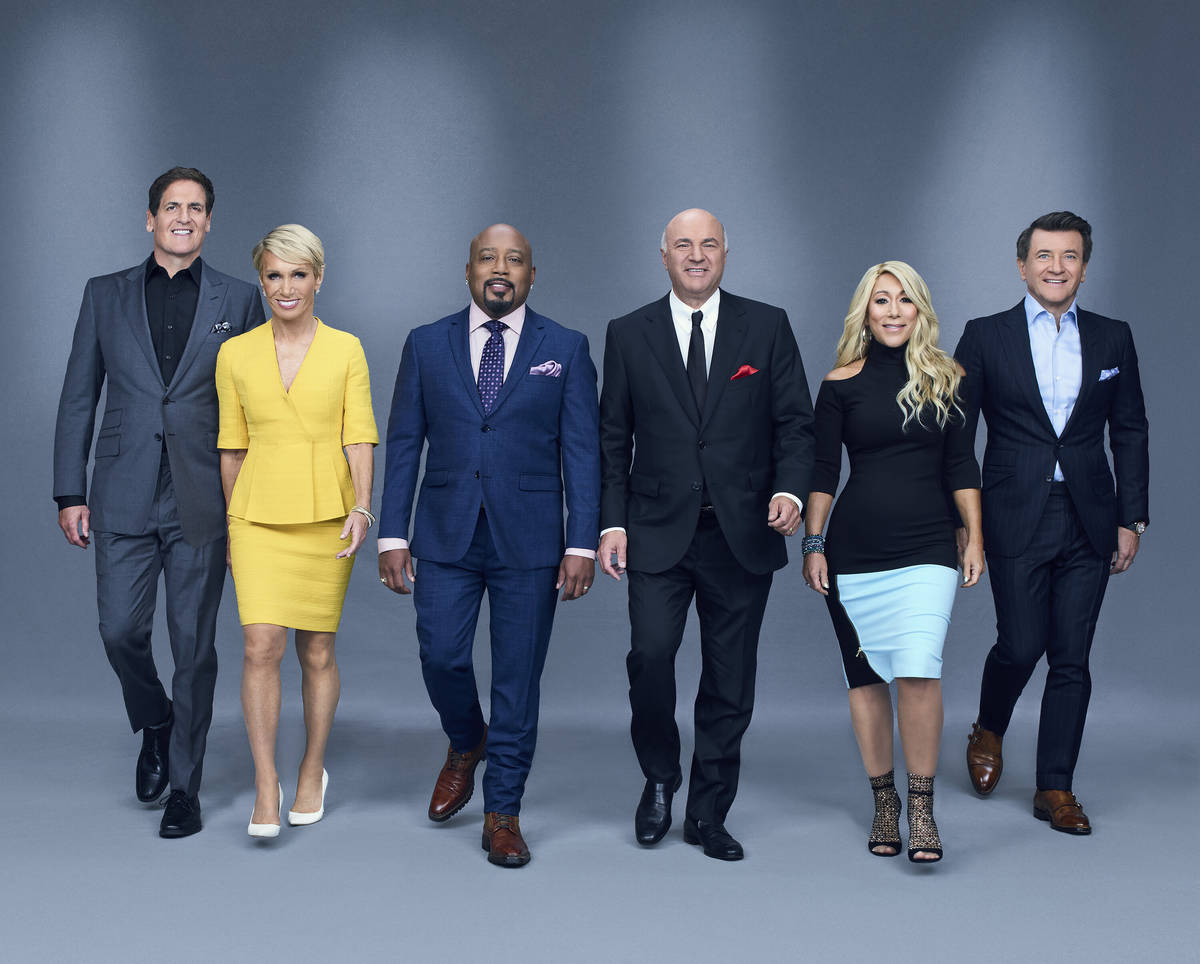 Throughout its 11 seasons, “Shark Tank” has showcased some of the greatest ingenuity and problem-solving skills America has to offer.

The fact that there’s a 12th season, debuting at 8 p.m. Friday on ABC, is evidence that some of those abilities must have rubbed off on the show’s producers.

With “Shark Tank’s” Culver City, California, studio off-limits this summer because of COVID-19 lockdowns, executives began seeking a safe environment in which to film. That search ended at The Venetian, which created a million-square-foot bubble, including sealing off a third of the Palazzo tower, and piggybacked the production onto its established coronavirus protocols.

“Look, if you’re going to be in a bubble, and you’re going to have to spend some time in a hotel room, you want to do it in a resort like The Venetian,” says executive producer Clay Newbill, who acknowledges that he and the show’s cast of uber-rich investors weren’t exactly roughing it at the resort. “They were very well taken care of. Every Shark, I can tell you, left that place very, very happy.”

To keep the cast and crew of the entrepreneurial hit isolated, their block of suites had its own dedicated elevator banks, says George Markantonis, president and chief operating officer of The Venetian. A pathway, walled off from the rest of the hotel, led them from those elevators, through a vacated back-of-house corridor, all the way to the Sands Expo Center where filming took place.

“Thus,” Markantonis says, “we had this one giant bubble where they never had exposure to anyone else on the property.”

Aside from the ample space, the most important element The Venetian brought to the table, Newbill says, was a COVID-19 testing system that was “proven and accurate and fast.” Weekly tests were administered to the more than 250 people involved in making “Shark Tank,” each of whom wore personal protective equipment except when they were on camera. A COVID-19 safety officer and a medical adviser were on-site during the August-September shoot.

With the resort’s restaurants outside the bubble, The Venetian staff had to set up a safe, socially distant dining experience inside a ballroom, as well as devise ways to provide meals worthy of the show’s Sharks, who collectively control more wealth than some nations. In addition to the returning Sharks — Mark Cuban, Barbara Corcoran, Lori Greiner, Robert Herjavec, Daymond John and Kevin O’Leary — the show welcomed baseball great Alex Rodriguez, Kind founder Daniel Lubetzky, jewelry designer Kendra Scott and Toms founder Blake Mycoskie as guests.

“This is not a group of people that are going to eat sandwiches and burgers,” Markantonis notes. “We needed to provide restaurant-quality, upscale food in a safe environment.”

As for that environment, Newbill says it was a resounding success.

“Our goal coming in was, ‘Let’s get in, let’s produce the show, and let’s get out without any of our people contracting COVID.’ And we were able to accomplish that.”

Aside from a short segment touting The Venetian partnership at the top of Friday’s premiere and a few mentions of COVID-19, you’d be hard-pressed to tell the new “Shark Tank” episodes from the reruns on CNBC.

The most noticeable difference is that the Sharks’ chairs are farther away from each other, and they’re arranged in an arc rather than that straight line that left them awkwardly leaning forward to talk to each other.

“It’s not going to look or feel any different than a previous ‘Shark Tank,’ ” Newbill insists. “You’ve still got all the elements.”

It’s that visual continuity that could end up paying healthy dividends, as Markantonis says he’s “had a lot of similar productions reach out” about filming in the same manner.

“I think what we have done here is not only good for The Venetian resort but actually good for all of Las Vegas,” he adds. “I’d love it if a whole bunch more TV series said, ‘OK, if these guys can do it, let’s just see what we can do.’

“There’s a lot of us in this town,” Markantonis says of his competitors. “We’ve got plenty of facilities to go around. We’d be happy to share.”