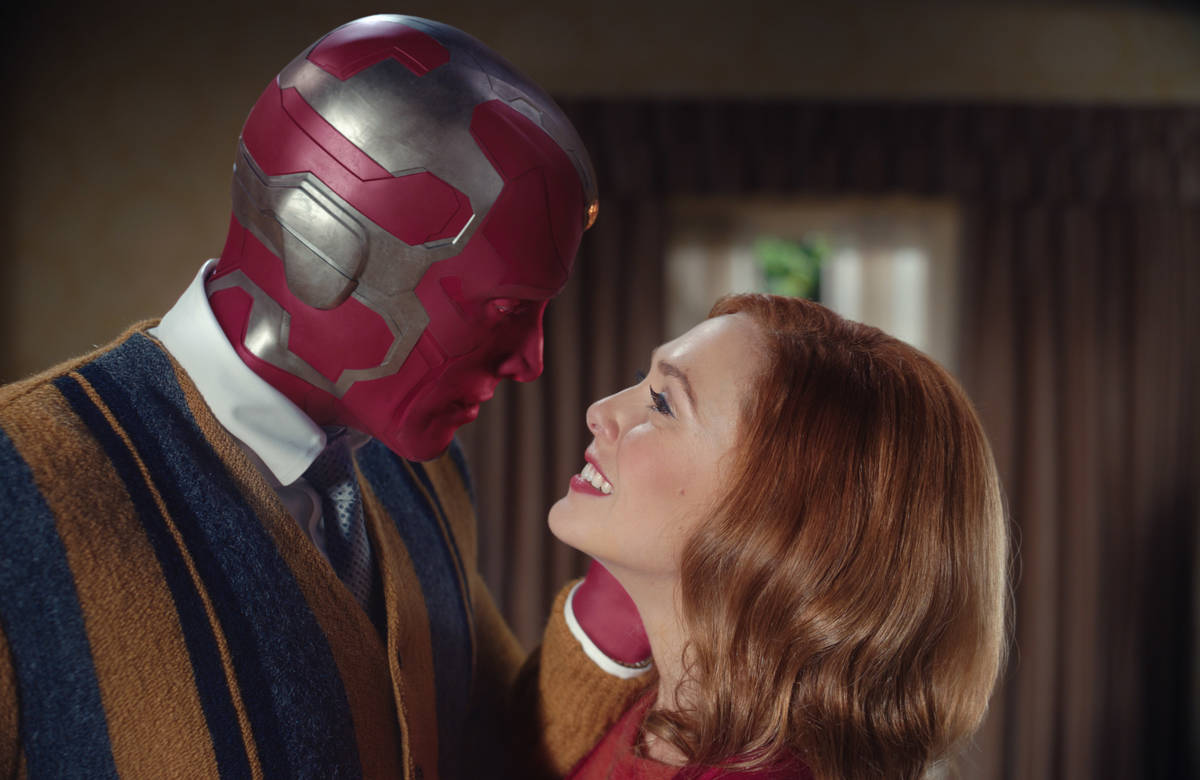 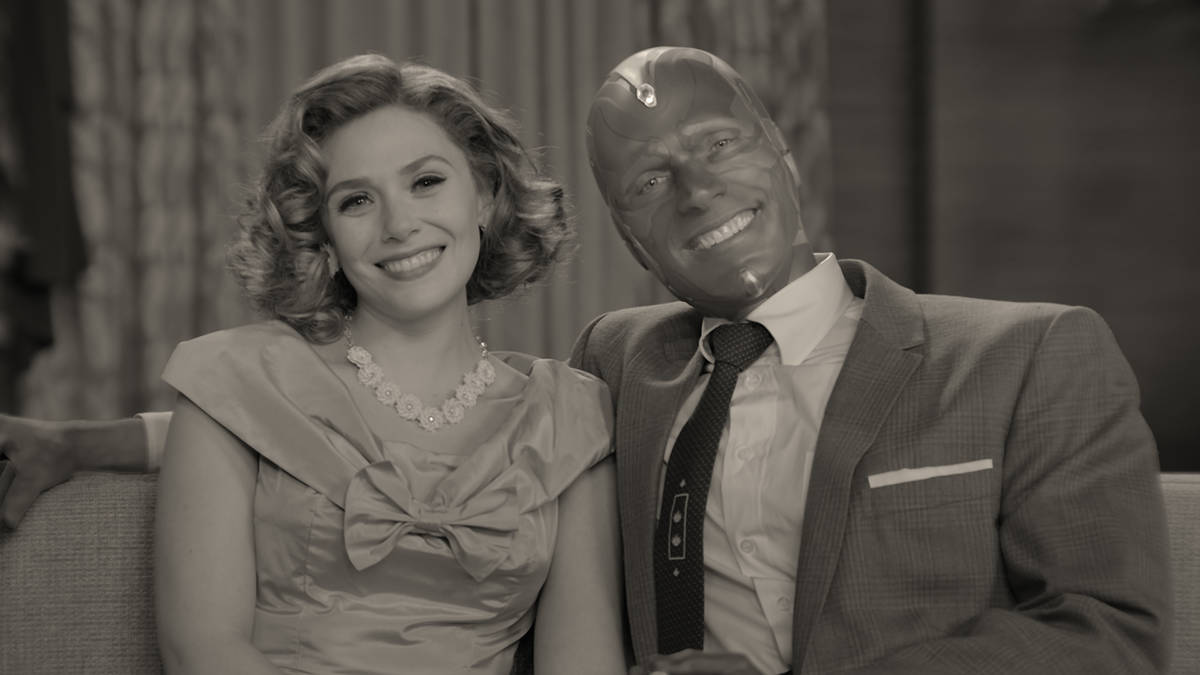 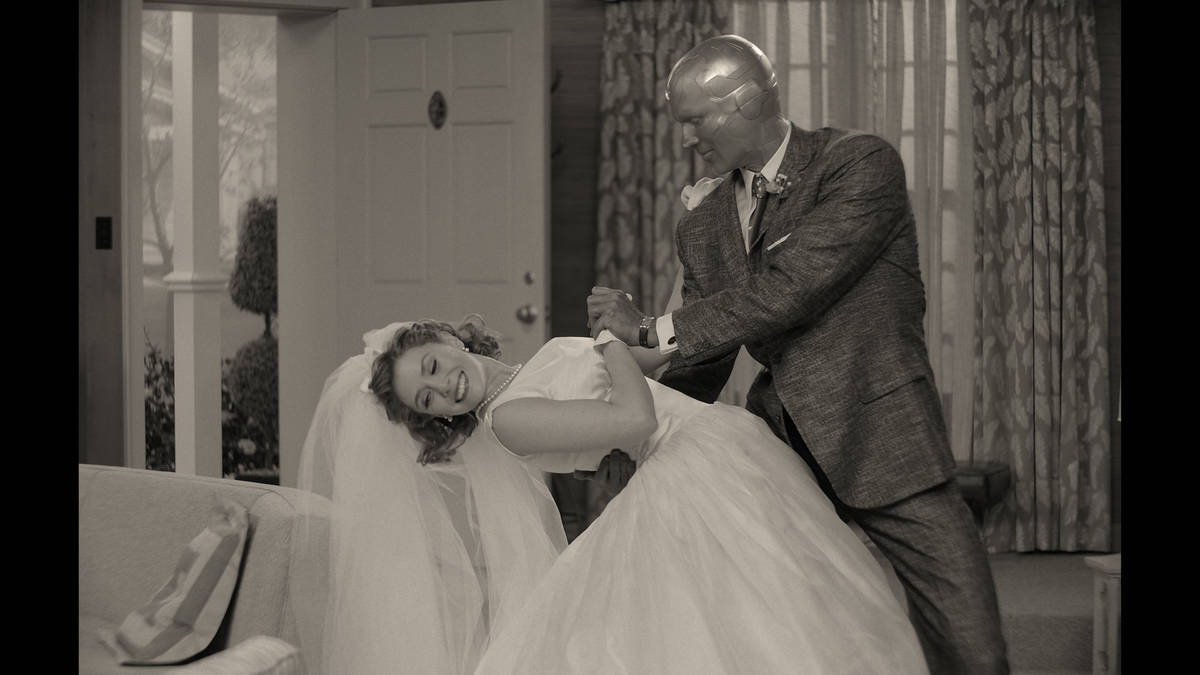 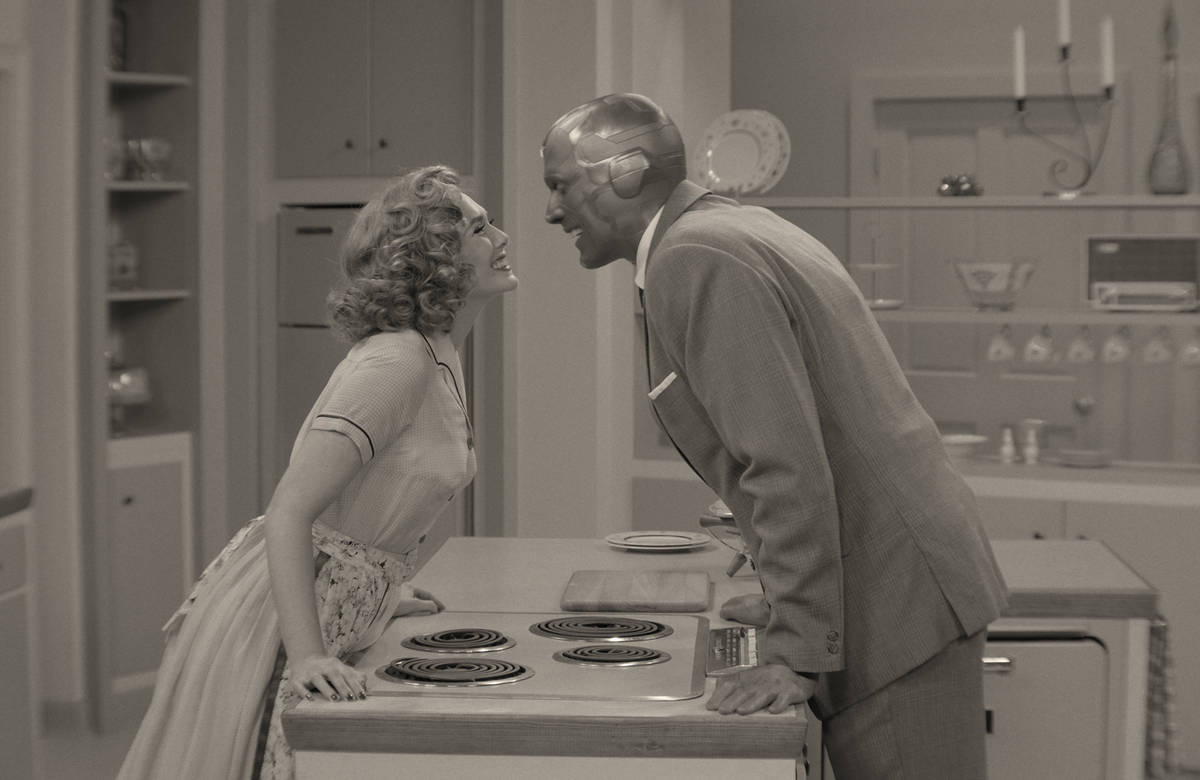 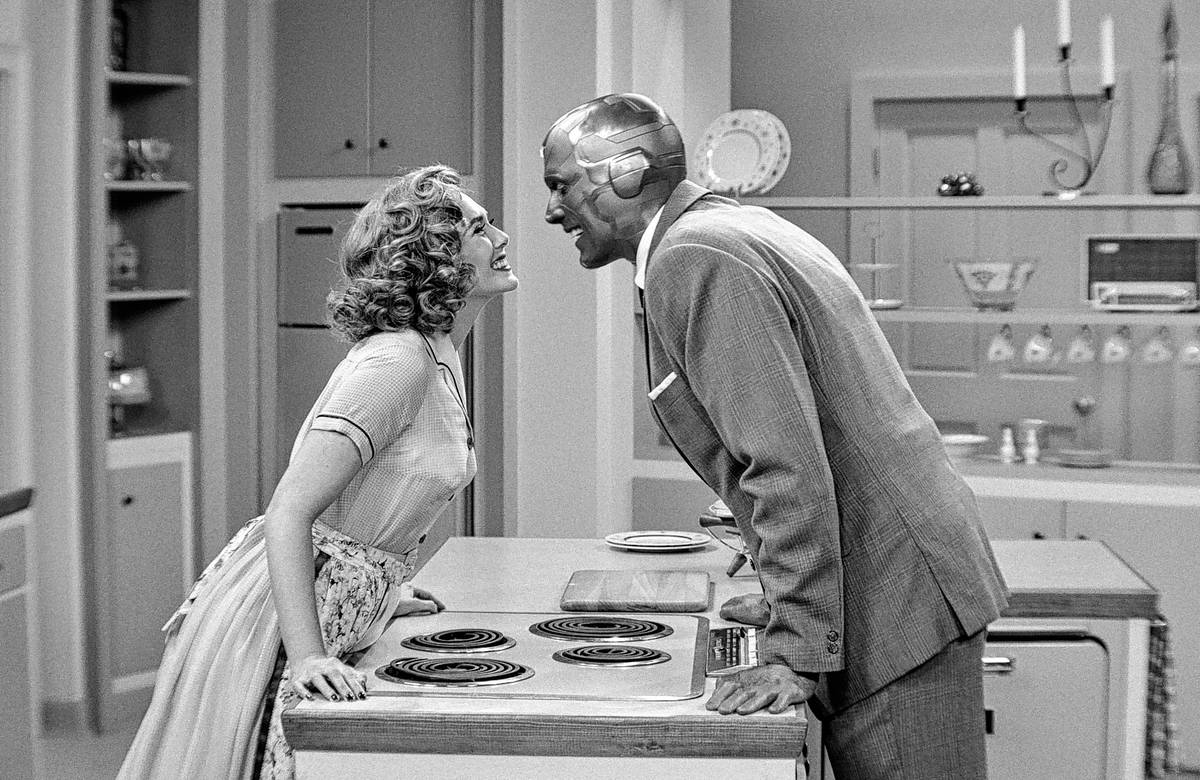 Marvel Studios Elizabeth Olsen and Paul Bettany portray superpowered beings settled in the suburbs, where something is very wrong. 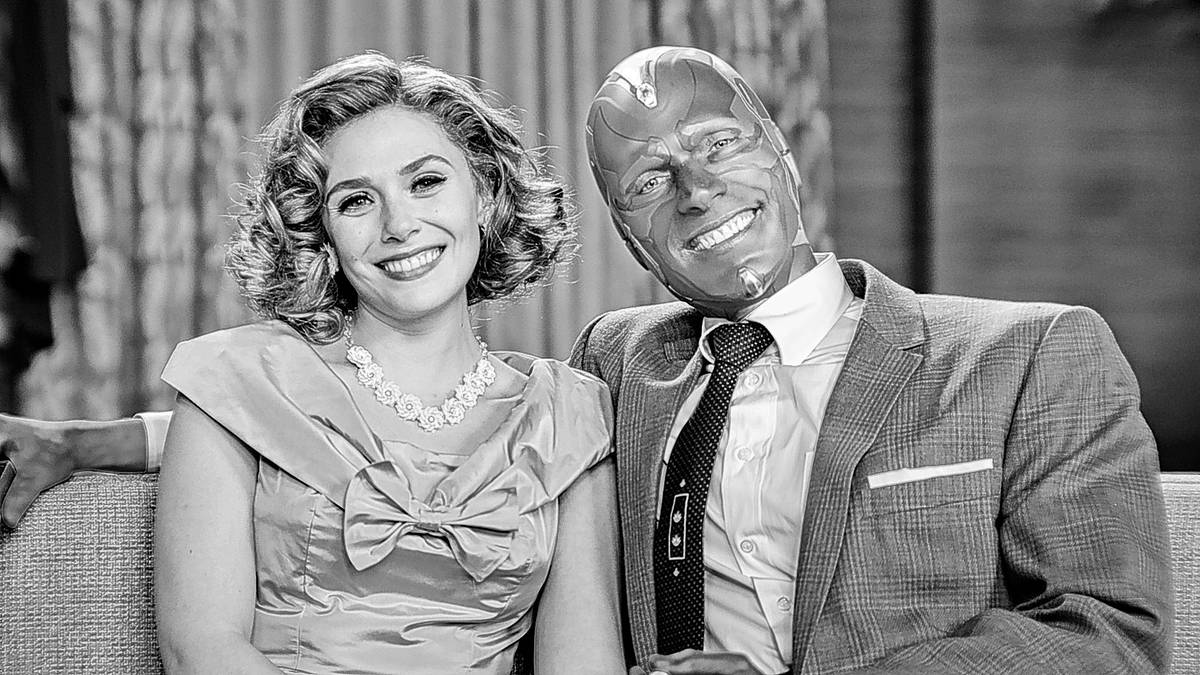 They’re those neighbors — strange people with jobs that cannot be spoken of at the local block party.

“She can’t exactly say, ‘Before we moved in, I helped to kill Thanos,’ ” Elizabeth Olsen jokes.

Olsen stars in “WandaVision,” which begins Friday on Disney+, and by all accounts it’s a different look at the Marvel Cinematic Universe. The first streamer show is a family sitcom in which two superpowered beings and “Avengers” favorites are settled in the suburbs. Witch Wanda Maximoff (Olsen) and half-human/half-robot Vision (Paul Bettany) portray a married couple who don’t take long to figure out that something is very wrong with their newfound utopia.

Olsen spoke on an early Sunday morning Zoom call from Los Angeles, joined by Bettany from his New York home, and Kevin Feige, producer and chief creative officer of Marvel, who set this universe in its proper place.

“We wanted to do something with these characters that could not be done as a feature film,” Feige says. “We turned a frankly wacky idea of turning this into a sitcom into a show that worked out perfectly as the MCU’s debut show.”

Review-Journal: What was it like to take an intense “Avengers” film and turn it into a sitcom in front of a live studio audience?

Elizabeth Olsen: It was so nerve-wracking because this was also a sitcom, which meant there was a lot of adrenaline and quick changes. It totally confused my brain. The idea of feeding off an audience and having a camera right there was also amazing.

Who were you drawing from to create the sitcom version of Wanda?

Olsen: It was such a mix. I think deep down, I was trying to combine Mary Tyler Moore and Elizabeth Montgomery from “Bewitched.” I know I accidentally threw in some Lucille Ball because there was a lot of physical comedy. I watched a ton of old sitcom episodes to get into character.

How does an android like Vision fit into suburbia?

Paul Bettany: This felt so different that when I read the script for “WandaVision,” I worried, “How do I keep him the same?” Then I realized that Vision is always becoming something or someone else. He’s omnipotent, but at the same time naive. I threw in a little bit of Dick Van Dyke and Hugh Laurie. … What Vision is, no matter what, is decent and honorable. He exists for Wanda, because this is ultimately a love story. He needs to keep her safe.

How does Vision blend into his new community?

Bettany: He needs a lot of wit and a really good makeup job.

How do Wanda’s powers translate to the sitcom world?

Olsen: I couldn’t wiggle my nose, so we had to figure out something else that was period appropriate and right to translate that Wanda does have powers. She does it with her look and her hands. It was all very practical, which is different because I’m used to things coming together with CGI (computer-generated imagery) after I shoot the movies. To watch our special-effects team — who blow things up and set things on fire and create smoke — become puppeteers was amazing.

The series explores sitcoms from the ’60s through the ’90s. Did you change your acting style and even your physical approach for each decade?

Bettany: There is a lot more slapstick and physical comedy early on in the series when we were in the ’60s. We got inside each of the decades. Luckily, by the time we get to the ’90s, they made me look so ridiculous I didn’t have to work that hard for laughs.

Olsen: The way women moved throughout the decades changes so much when it comes to what society wanted from them. That really informed my performance. Then there was the time when I got to wear some pants. That requires a different physicality than skirts. We got this book of manners for every decade. Of course, we’re not depicting a reality of the ’50s or of the ’70s. This is its own reality with its own set of rules.

In the end, what is the message?

Olsen: It’s a family sitcom of two people trying to fit in and not be discovered for being different. It’s a poignant message when you think about it.

What is an ideal Sunday for you both — in suburbia or in other universes?

Olsen: I’m a bit of a wanderer. I love to travel, and hopefully soon I can explore new places and experiences again.

Bettany: I like to hang out with my wife and kids when not saving the world.