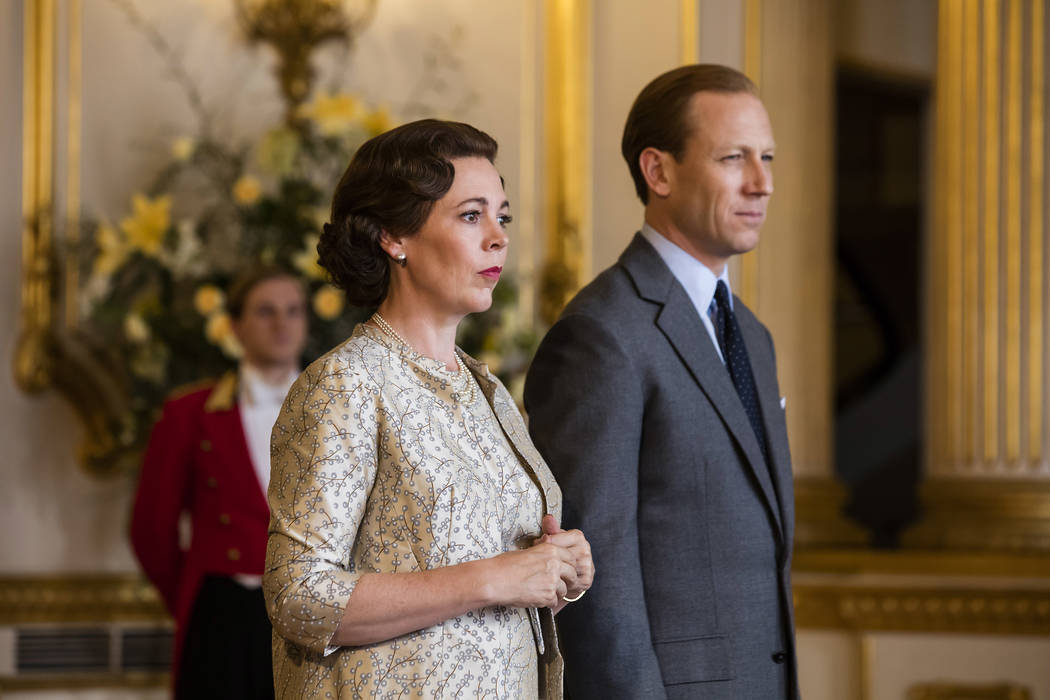 Olivia Colman and Tobias Menzies in "The Crown" (Sophie Mutevelian/Netflix)

Season 3 of the acclaimed drama about the life of Queen Elizabeth spans the early 1960s through late 1970s and introduces Olivia Colman and Tobias Menzies as appropriately older versions of Elizabeth and Prince Philip. Also new to the cast are Helena Bonham Carter as Princess Margaret, Josh O’Connor as Prince Charles, Emma Corrin as Lady Diana Spencer and Gillian Anderson as Margaret Thatcher.

Tisha Campbell and Tichina Arnold return to Orleans Arena to host the annual awards ceremony that recognizes the best in soul, R&B and hip-hop across 12 categories. Chris Brown leads the nominees with eight nods, followed by Drake with seven and Beyoncé and Lizzo with six each.

The top 13 artists perform live in front of coaches Kelly Clarkson, John Legend, Blake Shelton and Gwen Stefani for America’s vote. This week’s theme is Dedications Week, so the artists will perform songs in honor of someone special.

Design pro Hilary Farr and real estate expert David Visentin try to sway more homeowners who are on the fence about moving. Monday, Hilary aims to please by making over a cracked ceiling and closed-off rooms. David searches for an upgraded abode.

In the age of social media, where preconceived notions dominate and dating apps thrive on a swipe in the right direction, hopeful singles looking to form a true connection — or perhaps just any connection — take the ultimate plunge when they embark on a blind date. A nod to the original format with a modernized twist to match social media trends, each half-hour episode focuses on two couples of varying ethnicity, sexual orientation and age.

Conner family tensions run higher than a thermometer in a Thanksgiving turkey in Tuesday’s episode, and Katey Sagal has a front-row seat as Louise, the La Casita Bonita manager who fancies widower Dan (John Goodman). She scores an invite to their holiday dinner — where Darlene (Sara Gilbert) continues to vote against the financial gamble of her sister, Becky (Lecy Goranson), and Aunt Jackie (Laurie Metcalf) reviving the Lanford Lunch Box restaurant.

In the new episode “Woman Down,” one of Chastain Memorial Hospital’s own is brought into the emergency room with life-threatening injuries, and the staff rallies around each other to try to save her life.

Season 9 of the reality series returns to the most remote corners of Appalachia to follow America’s most daring outlaw distillers as they make authentic spirits and fight for their historic way of life.

Archie’s (KJ Apa) plan to host a peaceful Thanksgiving dinner at the community center quickly gets derailed when some unexpected guests arrive. Stranded at Stonewall Prep by an ice storm, Jughead (Cole Sprouse) and Betty (Lili Reinhart) search for clues about a recent death on campus.

Antisocial private eye Dex (Cobie Smulders) has two goals in this episode of the action-packed freshman drama: dig up dirt on a politician by going undercover on his staff, and survive Friendsgiving at the bar Bad Alibi.

The Paddy’s Pub gang ends Season 14 of the comedy with back-to-back episodes that go from a debate over women’s haircuts to a debate over why they play laser tag.

Former pro surfer and model Stephen Friedman’s travel series — which focuses the camera on the locals, not him — wraps up with a two-parter set in the northeast of Brazil. It’s for anyone who values conversation above scenery, though the sight of passionate young men and women practicing the acrobatic sport capoeira would certainly qualify as an amazing view.

Enjoy an evening of films helmed by legendary director John Ford, beginning with “The Man Who Shot Liberty Valance” (1962) and featuring “The Searchers” (1956), “The Grapes of Wrath” (1940) and more. The evening will also include a 2018 documentary called “John Ford: The Man Who Invented America.”

The show about widower Wade Felton navigating parenthood and dating after the loss of his wife continues to find humor amid the pain as Wade and his girls host Thanksgiving for their friends and extended family, including his opinionated sister-in-law (guest star Annie Mumolo).

Starting Friday and running through Nov. 27, Syfy celebrates the Wizarding World with all of the Harry Potter films as well as “Fantastic Beasts and Where to Find Them.”

An overworked businesswoman (Kimberly Elise) learns the meaning of “be careful what you wish for” after she offhandedly wishes she had taken another path in life. Her world is turned upside down when that wish comes true.

“Christmas at Graceland: Home for the Holidays”

Adrian Grenier, Kaitlin Doubleday, Priscilla Presley and Chase Bryant star in this rom-com that takes place at the legendary home of the King of Rock ’n’ Roll, Elvis Presley.

Known for his well-crafted storytelling and hilarious impressions, Lil Rel Howery makes his HBO stand-up comedy debut with this hourlong special filmed before a live audience at Dorsey High School in Crenshaw, California.