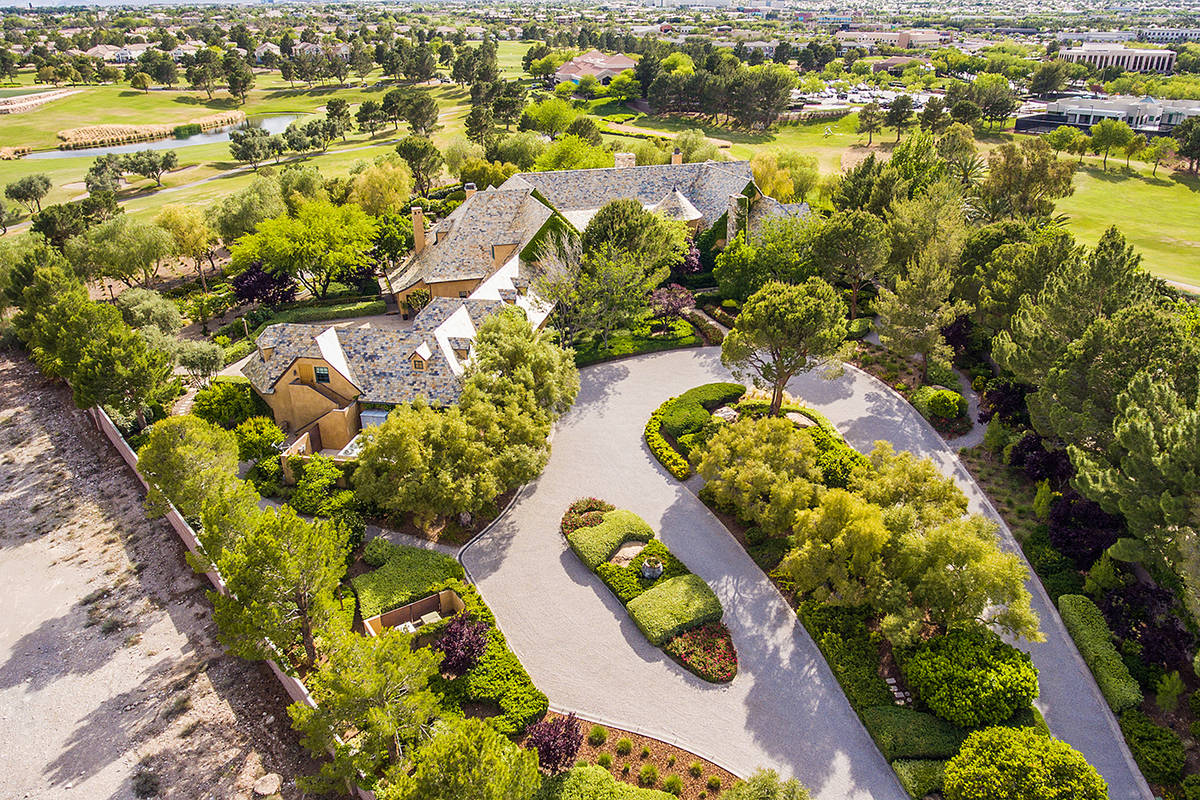 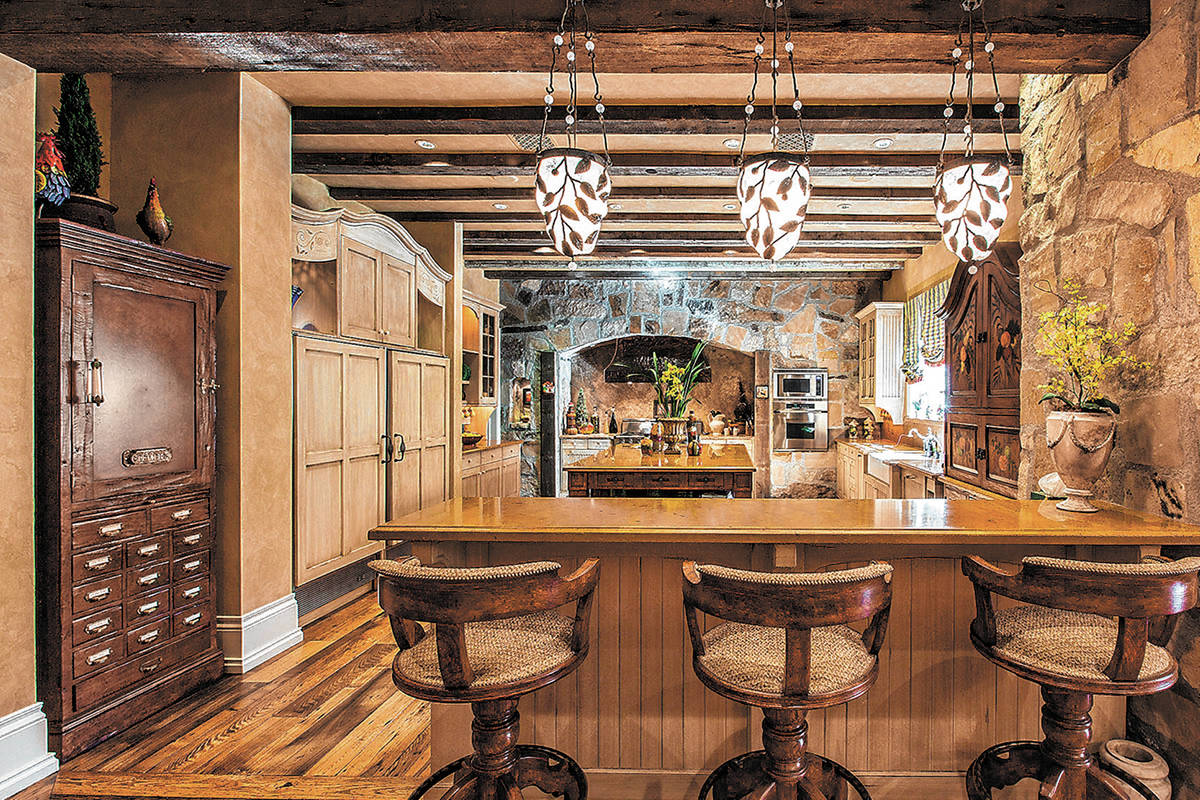 The kitchen. (The Ivan Sher Group) 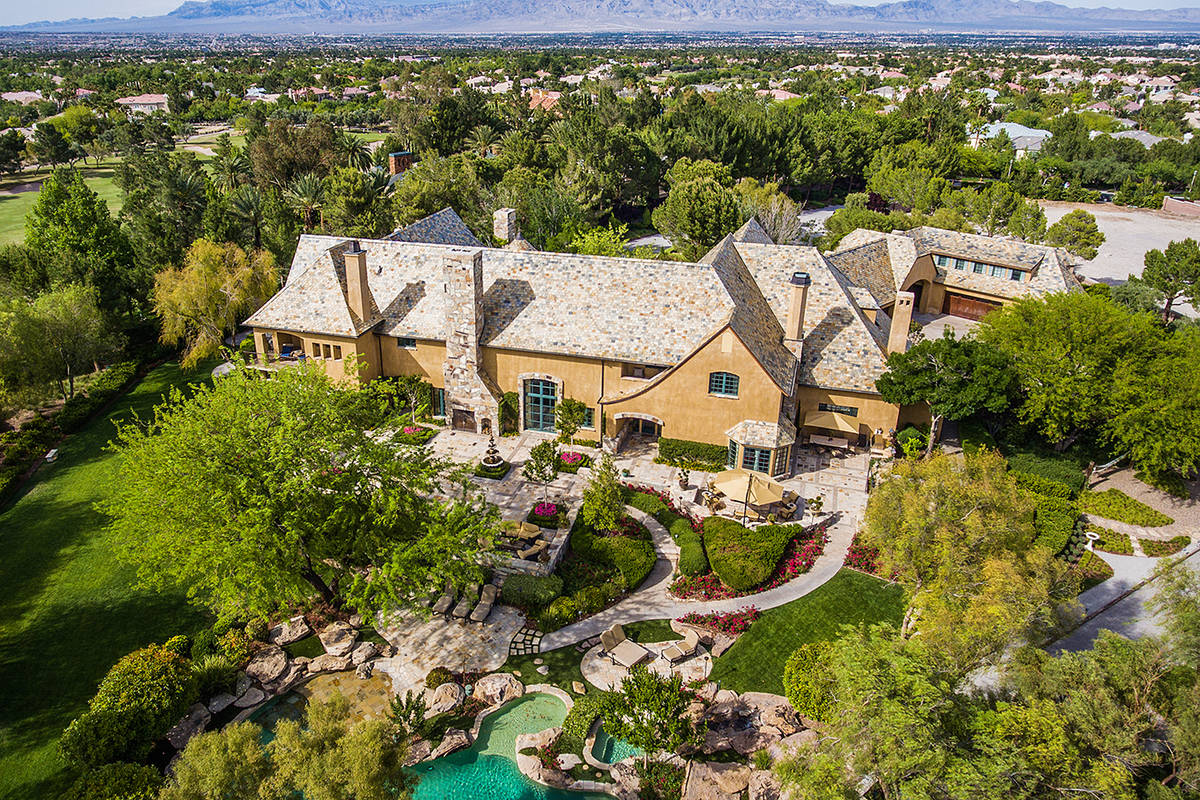 The Ivan Sher Group Former casino executive Barry Shier has sold his home on Billionaires Row in Summerlin for $11.3 million in a sale to a Silicon Valley e-commerce executive. That makes it the highest price sale for a Las Vegas luxury home so far this year. 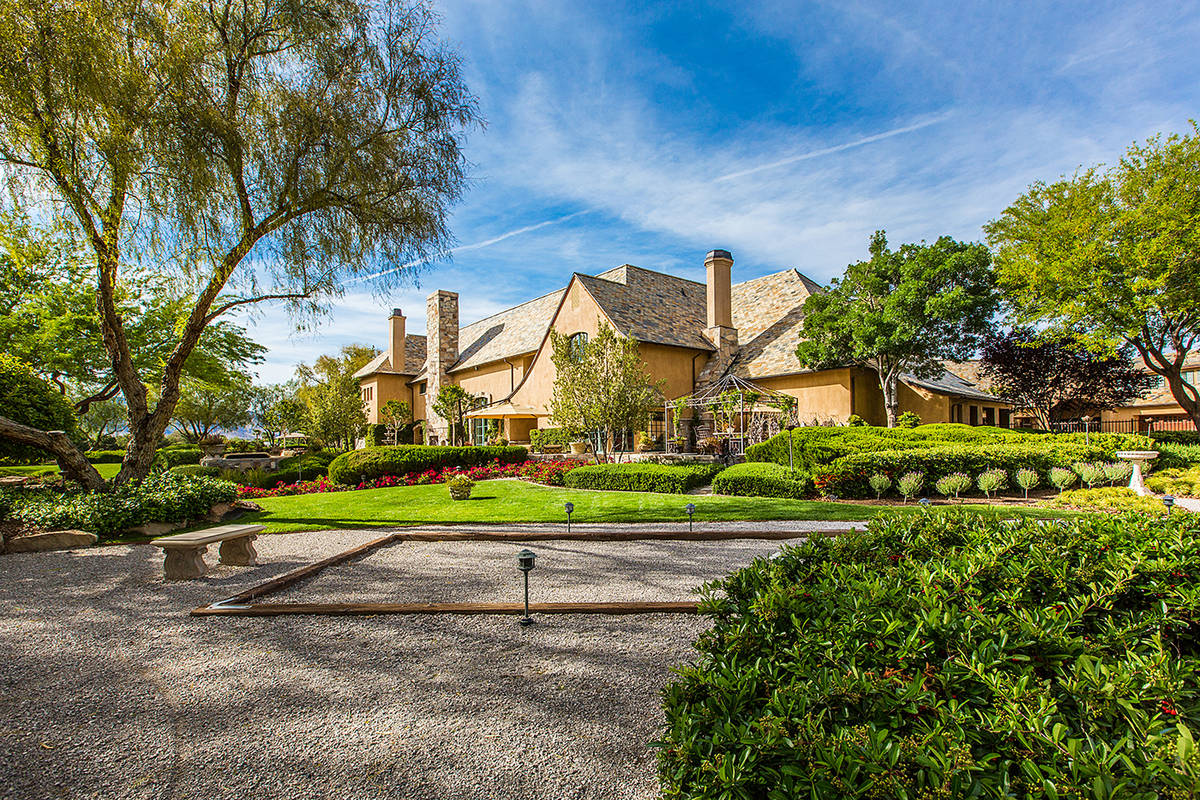 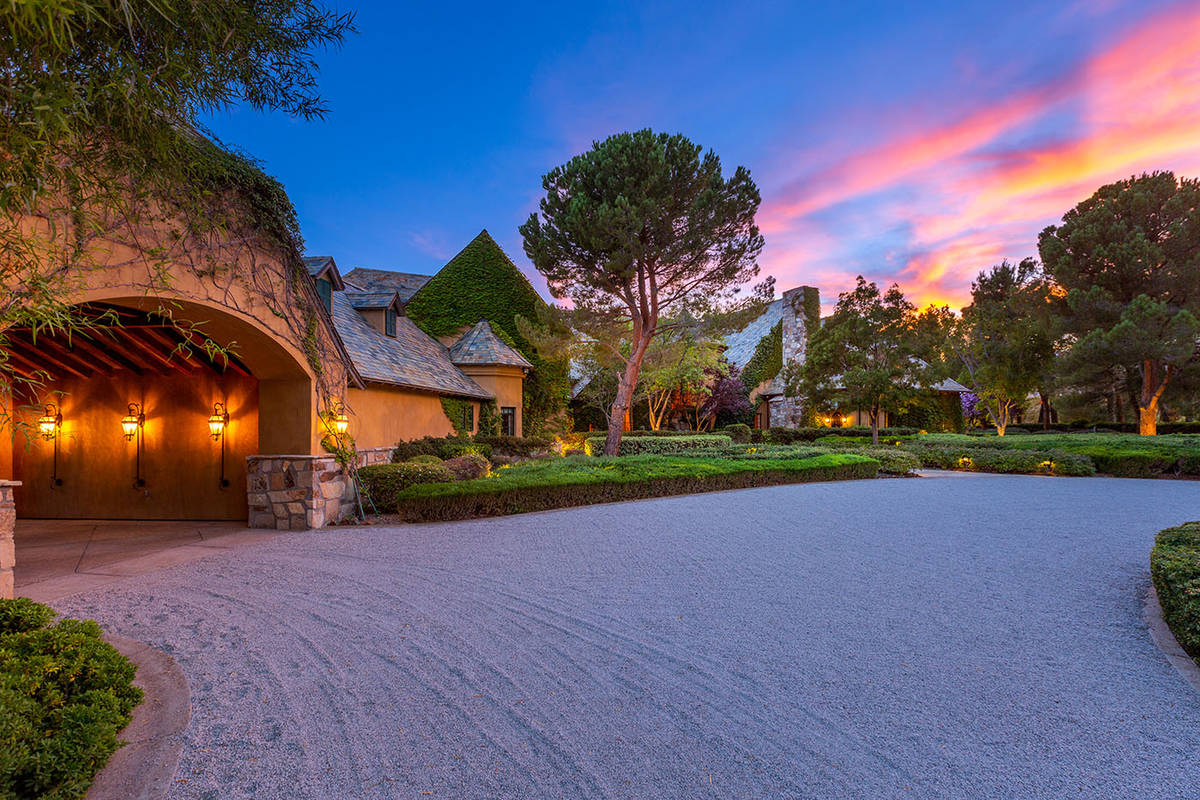 The Ivan Sher Group The home has a seven-car garage and maid’s quarters separate from the house. 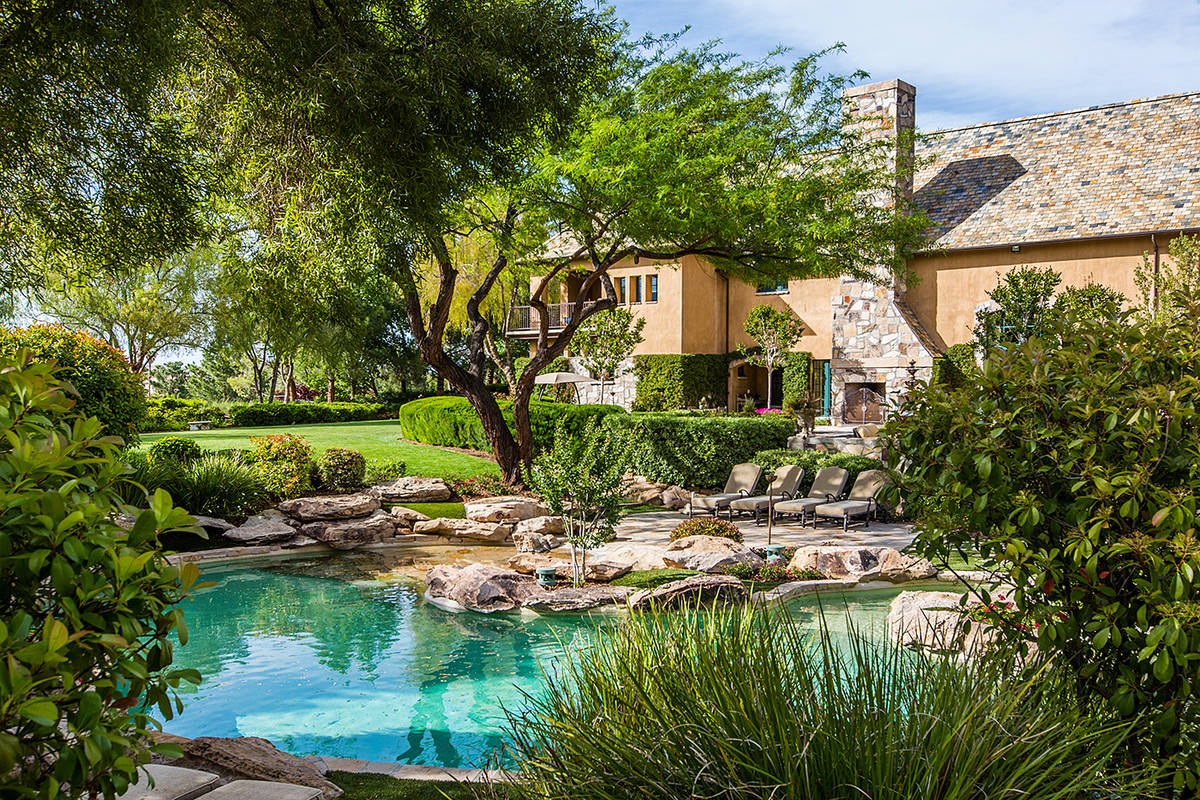 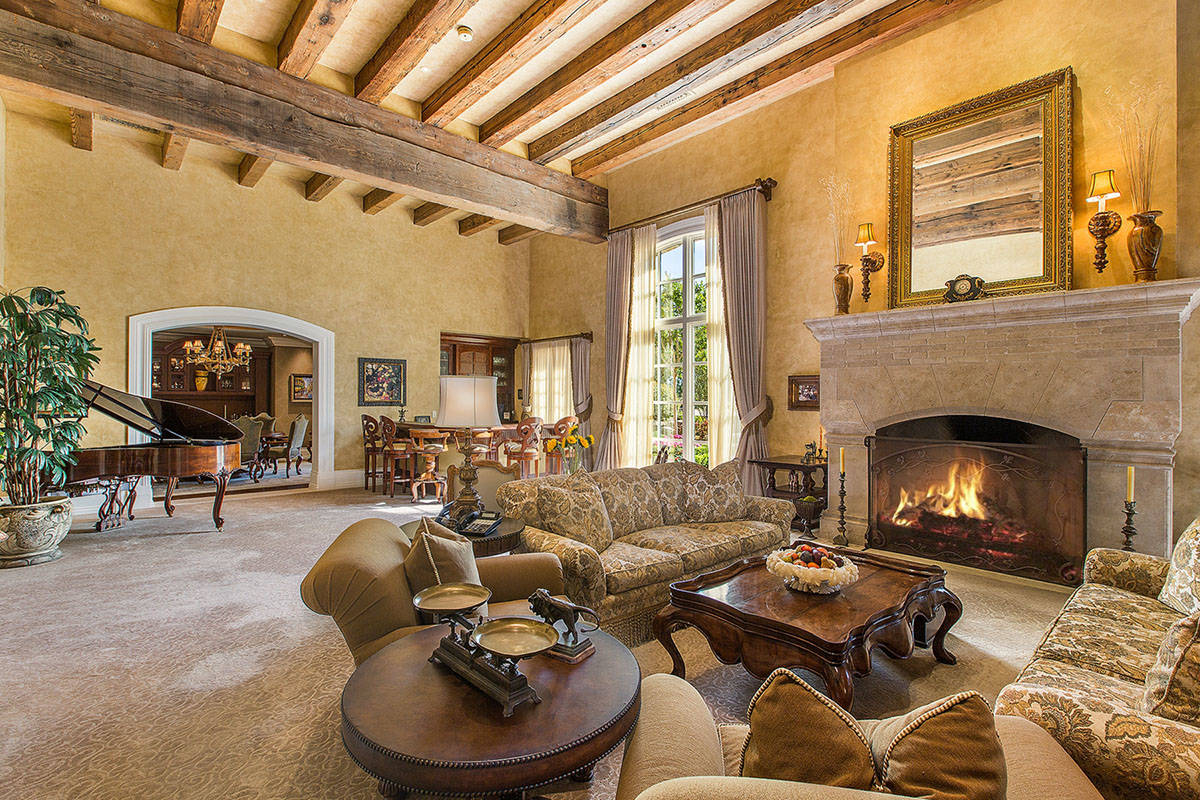 The Ivan Sher Group The home has handcrafted chestnut, cherry and stone flooring, hand-hewn beams imported from France, and “the finest in wall finishes can be found throughout.

The sale, which closed Monday, of the property on Enclave Court in Country Club Hills in Summerlin is the second luxury home to close this month in the seven-home exclusive neighborhood known as “Billionaires Row,” where Steve Wynn owns a home.

Clark County property records show the buyer of the Shier home is John Lagerling, the CEO of e-commerce company Mercari US, according to business networking site LinkedIn.

Greg Clemens, a Realtor with Coldwell Banker Premier, who represented the buyer, said there was an attempt by South Point casino owner Michael Gaughan to acquire the home from his client for $15 million once it closed escrow Monday. His client turned down the offer of nearly $4 million more than he paid.

“That tells me there is gold or oil underneath that property,” Clemens said jokingly.

The 2021 record of the Shier sale may not last long. A 12,100-square-foot home in Ascaya, the Henderson hillside community, is under contract for $15.9 million, according to Las Vegas Realtors.

Ivan Sher, a luxury Realtor with Berkshire Hathaway HomeServices, was the listing agent of the Shier home. He holds the all-time record for brokering the sale in 2016 of an Enclave Court home measuring 31,000 square feet. It was bought by magician David Copperfield for $17.55 million in 2016.

“This is a home that has probably been on the market for about five years,” Sher said of the Shier estate. “It sold now because our market is so strong. There’s no inventory. (For the first time) I have three to four people I am working with right now who are looking for homes over $10 million, and I can’t find them anything. It’s a sign of supply and demand. The supply is low, and demand is through the roof. We’re going to see the prices go even higher. I am convinced in the next year or two we will have $20 million to $30 million sales in this city. People have money to buy the best. They are coming from markets where $20 million to $50 million to $100 million are not uncommon. So when they find the best, they will buy it.”

In the past, luxury buyers were looking for homes priced between $3.5 million and $7 million, Sher said. Las Vegas has always counted on luxury buyers from Southern California, but what’s changed during the COVID-19 pandemic is the arrival of buyers from the San Francisco Bay Area, with Chicago and even New York, he said.

“There’s big money in Silicon Valley coming out here,” Sher said. “Now, it’s $10 million, $15 million and $20 million plus, and they’re ready to do what it takes to buy them. I’m talking to people who would sell their homes but haven’t put it on the market.”

Mercari, which was founded in Japan and operates in the U.S. based out of Silicon Valley, is known for its similarity to eBay.

Clemens said his client plans to relocate his business from the Bay Area to Nevada, which he chose over Austin, Texas. Nevada has had its advantages in luring Californians because it has no state income tax, he said.

The 14,132-square-foot, two-story French cottage built by Merlin Custom Homes sits on 2.6 acres on the 18th fairway at TPC Summerlin, where an annual PGA Tour event takes place. It is triple gated.

It has six bedrooms and 10 bathrooms. The master retreat is housed in a private wing that includes a full gym, steam room, his-and-her custom closet dressing rooms. Also featured are an 850-bottle wine cellar and a theater.

Shier is a former Mirage Resorts and Golden Nugget casino executive who envisioned the estate he built in 2000 as a place to entertain but also serve as a countryside private enclave where someone could recalibrate. He bought the first lot on Enclave Court.

The home has been described as an opulent chateau with components that can be compared with details only found in luxury hotels and casinos. Shier was intimately involved in the design, development and operations of destination resorts such as The Waldorf Astoria in New York City and the Golden Nugget and The Mirage in Las Vegas.

Sher described the home as an American interpretation of a French classic — “an architectural masterpiece of perfect form and function for those who prefer more than life’s simple pleasures.”

It has warm hues of taupe, chocolate, sienna and saffron, and Sher said the home’s “stately fireplaces, grand staircases, intimate alcoves and opulent retreats are fitting of a magnificent chateau.”

The home has handcrafted chestnut, cherry and stone flooring and hand-hewn beams imported from France, and “the finest in wall finishes can be found throughout,” Sher said. The design is inspired by Old World authenticity, seamlessly crafted with every amenity necessary for gracious living, Sher said.

“The home is absolutely unique and sensational,” Sher said. “There’s not a lot like it in the city. It’s gorgeous. It goes to show you that you don’t need to be modern to sell. Modern is the trend. This home is clearly not modern, but it’s the best in class.”

The estate is secluded from the golf course with its lagoon-style pool, spa, courtyard, lawns and bushes in the French country-style garden. There are several fruit trees: fig, plum, peach, nectarine, apricot, apple and lemon. The estate is surrounded by fencing with a wrought-iron gated entrance.

The estate has a roadway of crushed limestone leading 300 feet to the home, where there is a circular driveway. There is a seven-car garage in which a maid’s living quarters sits on top.

The home is about its details in how bath countertops have blue marble imported from a quarry in France and wall coverings that are hand-painted. A bath has an antique sink, and the home has other pieces and furniture from the 1800s France.

The construction mirrored the old way of building homes when a French family would build part of the home — the kitchen and the den — with stone walls put up six pieces at a time. When they built homes like that in the past, it was done over time and would create an irregularity in how the grout dried. The style was duplicated in this home.

In that sense, the house tells a story. In the past, French families added onto their homes over the years as the family grew and accumulated more wealth. In the Shier home, there is a point where the barn-like chestnut wood ends and cherry wood begins and becomes more modern. It was like taking a home hundreds of years old and putting in air conditioning and lights and modernizing it.

On the outside, the yard feels like an escape from Las Vegas’ desert landscape and daily life. It resembles an open park with walking paths around the backyard.

Standing on the balcony of a second-floor bedroom, there are views of California pepper trees that outline the 300-foot-long fence that runs along the golf course. The fence extends from the middle of the 10th fairway to the back side of the tee box on the 18th hole.

There are stone pine and mature mesquite trees on the property. The backyard is filled with crepe myrtles and oak trees in the courtyard area. There are rose bushes, lantana and pyracantha that is dormant during the winter and creates a burst of red colors in the spring. Rhapis bushes surround the pool area, which features quarried rock. The backyard has a fire pit for cooler nights and benches to sit and watch the birds.