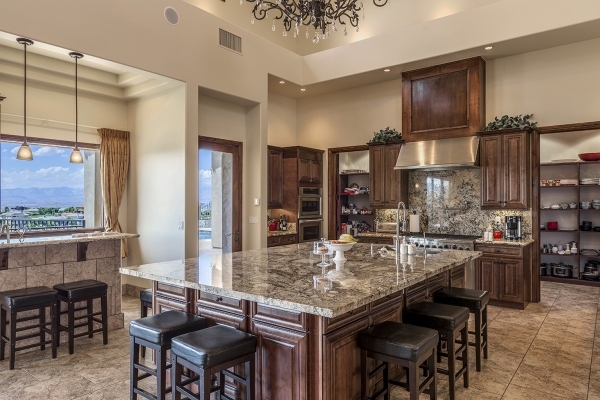 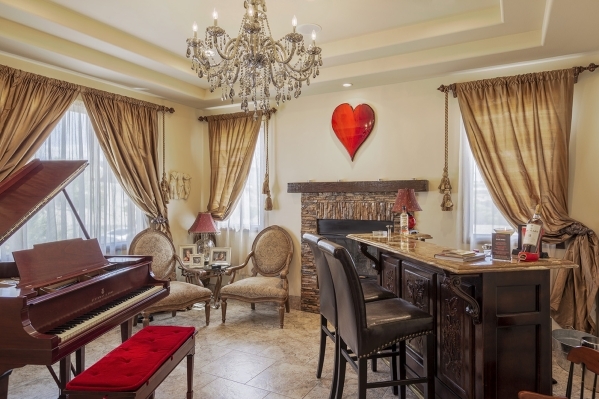 The home has a piano room. DAVID REISMAN/REAL ESTATE MILLIONS 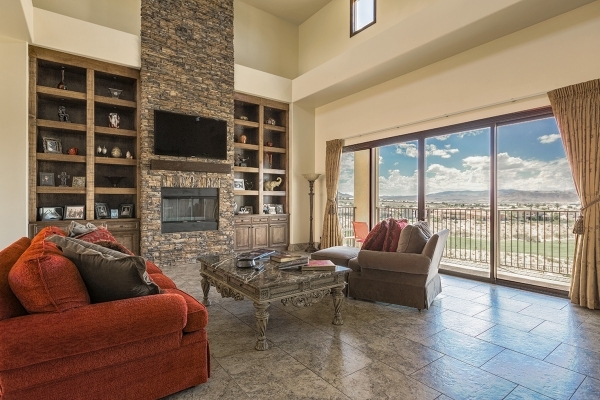 Angela and Matt Stabile recently moved into a Mediterranean-style house in Seven Hills that overlooks the Rio Secco Golf Course. The center of the home is the great room with a focal wall of brick fireplace flanked by built-in wood bookcases. DAVID REISMAN/REAL ESTATE MILLIONS 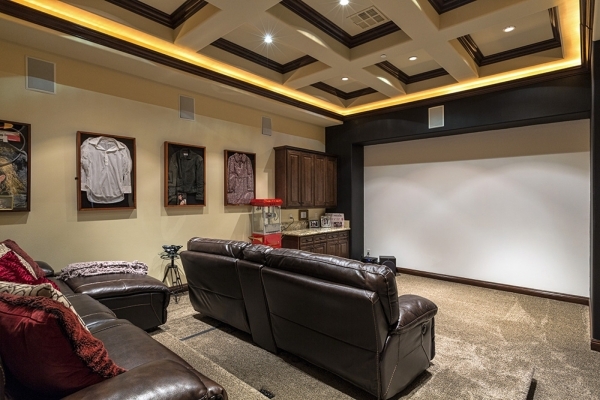 The home‘s movie theater has leather recliner seating for seven. Showcased on the walls are shadow boxes holding a Judy Garland-owned blouse, a shirt John Travolta wore in the movie "Two Of A Kind" and one very old Jerry Lewis shirt. There‘s a painted portrait of Andre Agassi and a framed doodle penciled and signed by Tony Curtis. DAVID REISMAN/REAL ESTATE MILLIONS 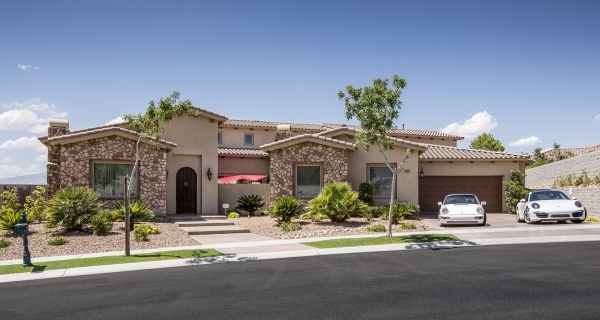 The Seven Hills house was built in 2010 on a half-acre and is 6,579 square feet. DAVID REISMAN/REAL ESTATE MILLIONS 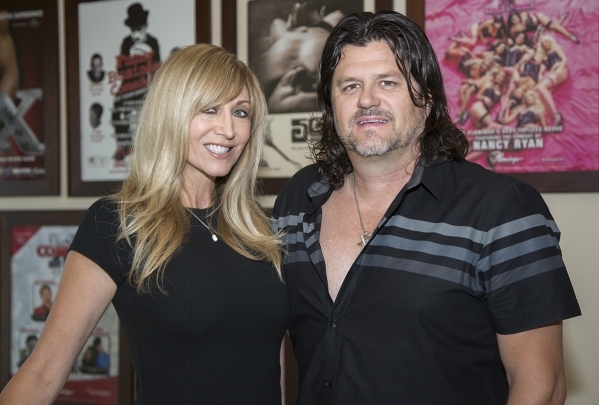 For many years she was a cast member of the “Crazy Girls” review at the Riviera, and her derriere was immortalized in bronze (the third one from the right) in the infamous rearview advertisement (“No ifs, ands or butts”) of the show’s dancers.

After leaving the show in 1999 she opened “X” at the Aladdin.

She met her husband and producing partner Matt Stabile when his company, Stabile Productions Inc., was hired to produce a commercial for “X,” which has since evolved into a joint venture called “X Burlesque.”

It’s described as a high-energy, racy, topless revue now in Bugsy’s Cabaret at the Flamingo. A variation of the show called “X Rocks” is in its third year at the Rio.

This summer they debuted “X Comedy” at the Flamingo, including Piff the Magic Dragon, who is a contestant on the reality TV show “America’s Got Talent.” And they’re finalizing details to launch an “X Country” themed show with contemporary country music this fall at a Strip hotel.

The couple recently moved into a Mediterranean-style house in Seven Hills that overlooks the Rio Secco Golf Course. It is a split-level, four bedrooms, 4½ baths with a two bedrooms upstairs and two downstairs. Throughout the house, the family has displayed many cherished mementos of their careers and family, including Angela’s son Frankie Sidoris, who is a guitarist for the band Slash and the Conspirators.

The house was built in 2010 on a half-acre and is 6,579 square feet, providing ample storage and living space. The doormat in front of the house sports a large “X,” perhaps indicating visitors have just stumbled upon a buried treasure.

“It has a warm, Spanish feel,” Matt said.

Their most recent home was in Henderson’s MacDonald Highlands, and prior to that they lived in Anthem Country Club for 12 years.

“We fell in love with the view,” Angela said.

From the backyard, you can see the Strip. The couple said they wanted to stay in the area of town where they are comfortable and familiar.

At the front of the house is a small formal living room with a Steinway piano and an antique bar beneath a crystal chandelier.

The center of the home is the huge chef’s kitchen and great room with a focal wall of brick fireplace flanked by built-in wood bookcases. It features 25-foot high wood-beamed ceilings from which an ornate iron light fixture hangs above a rectangular center island with prep sink that seats 12. It’s a natural gathering spot, Matt said.

Through an arched brick doorway is an adjacent dining room where a collection of menus from the couple’s favorite restaurants is on display, including the House of Lords, Piero’s, Geisha Steak House and Bill’s Steak House.

Recessed lighting around the room’s perimeter and glass walls light up the room and provide a view of a cozy outdoor dining area on one side and a contemporary designed pool and deck overlooking the fairway on the opposite side.

There is a walkthrough, dual-door kitchen pantry. Walnut cabinets and trim topped with granite countertops line the room, along with Thermadore and KitchenAide appliances including three ovens, an eight-burner gas stove and a double-French door refrigerator. Porcelain tile floors and the same granite are used throughout the house and baths.

Although Angela and Matt are not skilled in culinary arts, their family members drop in often to make meals. She has a cookbook collection, including her favorite published by the Baptist church from her West Virginia hometown, which they still attend when visiting the area.

“I use mainly the old West Virginia and family recipe cookbooks,” she said.

The master bedroom has a two-sided stone-finished fireplace providing separation between the sleeping area, and a retreat with a chaise in front of the fireplace on soft carpet. Sliding glass doors open to the deck overlooking the golf course.

The two closets are fully outfitted with built-in storage and a second hookup for a washer and dryer. The master bath has an elevated soaker tub underneath a coffered ceiling, a walk through steam shower and dual vanities.

The powder room has a warm copper vessel sink with bronze fixtures. Hanging on one wall is a framed check for $250,000 signed by Jerry Lewis with a memo line reading “Happy Birthday!” It was a gag gift to Matt, whose family has worked for Lewis for decades, for his 40th birthday.

“My Dad was his manager for 50 years. I grew up with them. My mom still helps him out,” he said.

The lower level has a fully built out office with a collection of old cameras on the wall. The two bedrooms, which belong to their teenage daughters, are painted in strips or high-contrast bold colors.

In the media room, with leather recliner seating for seven, more memorabilia is on display, including shadow boxes holding a Judy Garland-owned blouse, a shirt John Travolta wore in the movie “Two Of A Kind” and one very old Jerry Lewis shirt. There’s a painted portrait of Andre Agassi, and a framed doodle penciled and signed by Tony Curtis.

A smaller family room downstairs opens to an outdoor putting green. The eclectic space has a glitter ball hanging over a curved sectional in front of television. One full wall is devoted to mementos from the Riviera Hotel and the Crazy Girls. Another holds framed photographs of the “Ocean’s Eleven” casts and Angela with Ted Kennedy, Donny Osmond, Jay Leno, Tom Jones, Sylvester Stallone, Robert De Niro and Joe Pesci.

It looks like this genial show biz couple got “Xactly” the home they deserve.