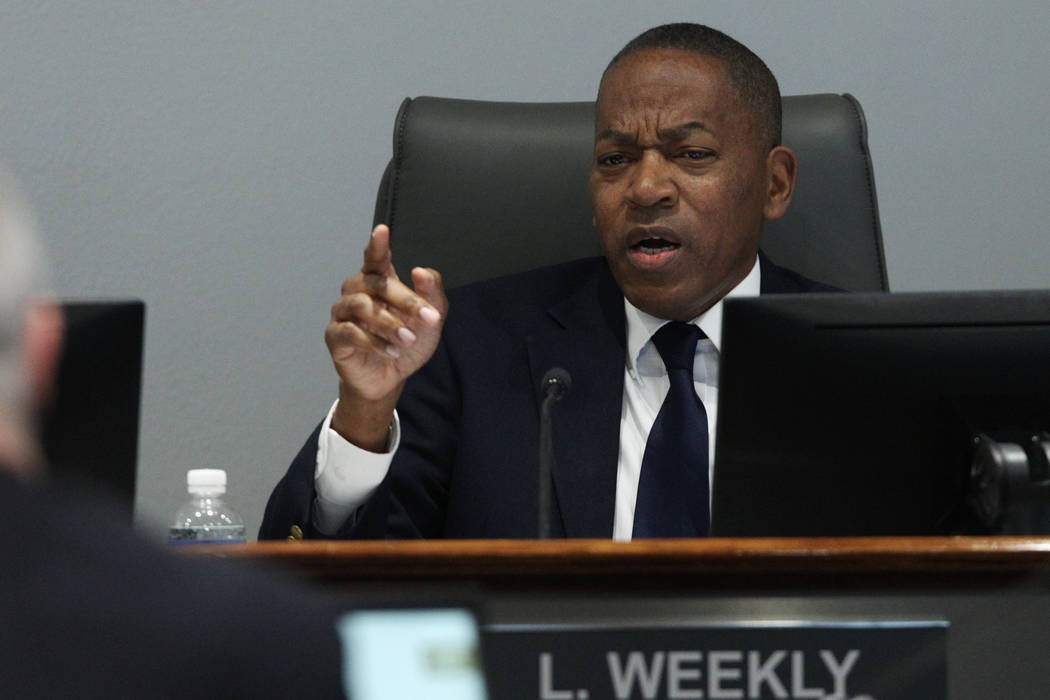 Clark County Commissioner Lawrence Weekly charged more than $1,100 in expenses to his campaign for a trip to Dallas with his daughter, records show.

The Nevada Commission on Ethics cited Weekly in January for violating the public trust when he accepted $1,400 in tickets for the 2016 trip from the Las Vegas Convention and Visitors Authority. The tax-funded agency purchased the tickets with Southwest Airlines gift cards it had bought.

Weekly, who chaired the LVCVA board at the time of the trip, agreed to pay $2,400 in fines to the Ethics Commission.

Nevada law prohibits spending campaign funds for personal use, but it is not clear about what is personal.

“This is something that we would need to look at further to determine whether it violated the law,” said Wayne Thorley, deputy secretary of state for elections.

An agreement Weekly signed with the Ethics Commission in February said the trip with his daughter was personal because Weekly did not seek business expenses from the LVCVA and no “travel authorization” was submitted to the agency.

But Weekly insisted this past week that he did not violate the state campaign law because he was traveling as a county commissioner and a member of the LVCVA board.

“It wasn’t like I was headed on a cruise or anything,” he said. “I went to Dallas, Texas.”

He said he was there as part of an effort to bring historic black colleges to Las Vegas to play a series of football games against UNLV. The convention authority sponsored the series.

Weekly said he visited with two college athletic directors and an assistant coach in Dallas, but he declined to identify them. He brought his daughter on the trip for a college visit and felt he didn’t need to ask for business expenses from the LVCVA, he said.

Weekly explained that it was a last-minute trip and he thought the American Airlines ticket was too expensive. So he asked an LVCVA executive to try to get him a better deal.

After the LVCVA provided the Southwest tickets, Weekly said, he forgot about the American Airlines purchase. But later, when he tried to get a refund, the company told him it could not do it.

The Ethics Commission has an ongoing investigation into the LVCVA’s mishandling of $90,000 in Southwest Airlines gift cards during the tenure of retired CEO Rossi Ralenkotter. Las Vegas police also are conducting a criminal theft investigation. Ralenkotter last year apologized for using $17,000 in gift cards on personal trips and paid back the money.

Yvonne Nevarez-Goodson, executive director of the Ethics Commission, said questions about Weekly’s campaign expenses in Dallas fall primarily under the jurisdiction of the secretary of state’s office.

“But to the extent that campaign-related issues provided other evidence of ethical violations, we would have the authority to initiate a complaint or otherwise evaluate any other complaint that may be filed,” she said.

Nevarez-Goodson said Weekly has not yet paid the fines to her agency over his use of the Southwest Airlines gift cards. He has until Sept. 13.

Weekly’s agreement with the Ethics Commission states that he waited nearly two years until the day of an LVCVA board meeting last April to reimburse the convention authority $700 for his daughter’s expenses.

He stepped down as chair of the LVCVA in January.