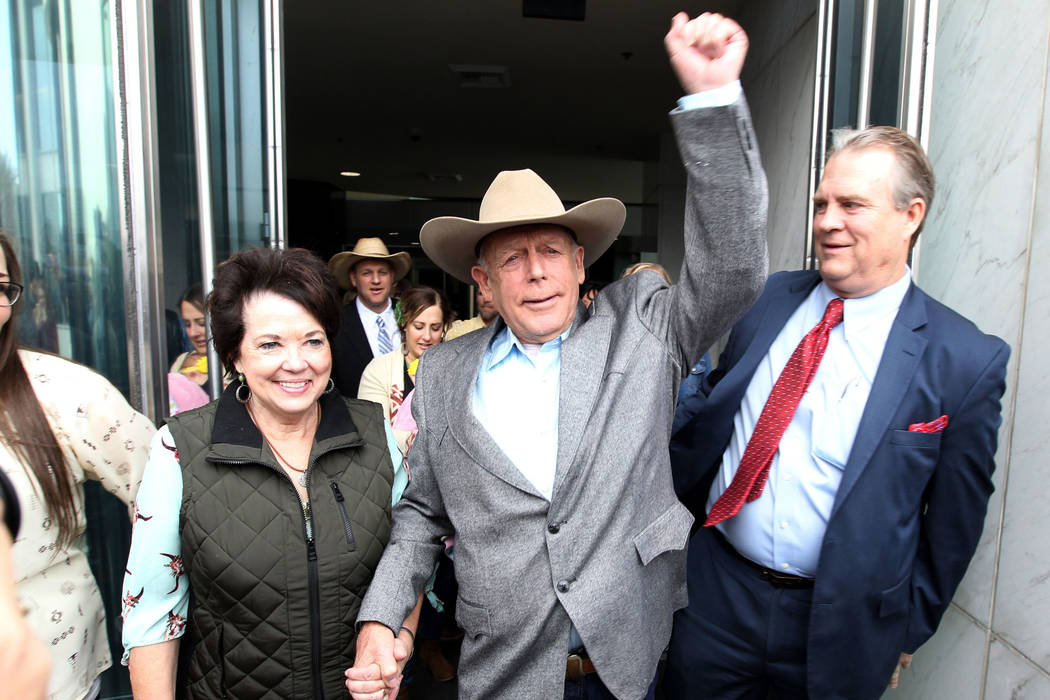 Cliven Bundy walks out of Lloyd George U.S. Courthouse in Las Vegas a free man with his wife Carol Monday, Jan. 8, 2018, after a federal judge dismissed the case with prejudice against him, two of his sons and another man in the Bunkerville standoff. At rear, in a cowboy hat is their son Ammon Bundy. (K.M. Cannon/Las Vegas Review-Journal) @KMCannonPhoto 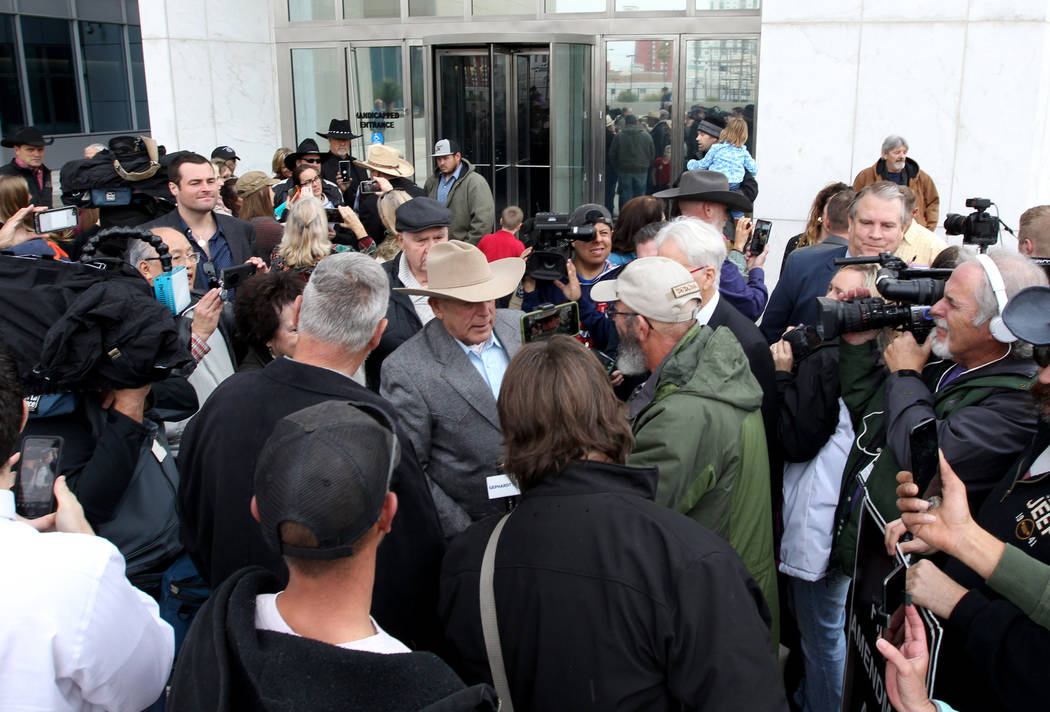 Cliven Bundy, center, talks to the news media after walking out of the Lloyd George U.S. Courthouse in Las Vegas a free man on Monday, Jan. 8, 2018, after a federal judge dismissed the case against him, two of his sons and another man in the Bunkerville standoff. K.M. Cannon Las Vegas Review-Journal @KMCannonPhoto 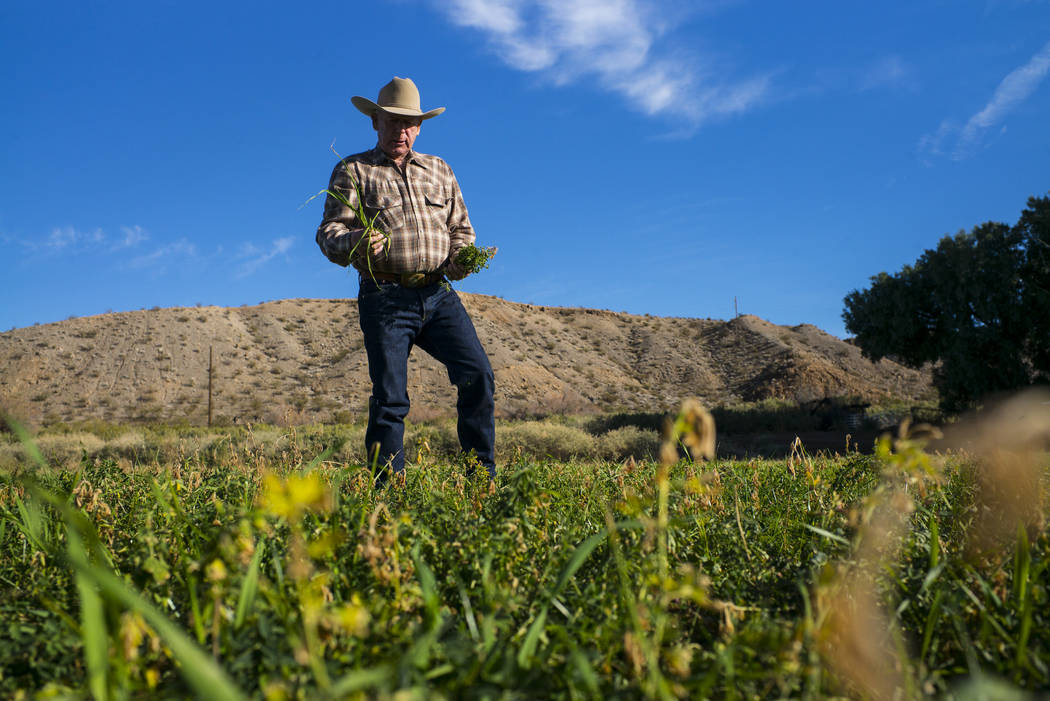 Federal prosecutors have been waiting 16 months for an appeals court to decide whether to resurrect the criminal case against Cliven Bundy and several co-defendants.

The U.S. 9th Circuit Court of Appeals has scheduled oral arguments sought by prosecutors in the high-profile case for March.

In a stunning decision on Jan, 8, 2018, U.S. District Judge Gloria Navarro tossed out the criminal charges in the middle of the trial because of what she called “flagrant” misconduct by prosecutors.

Bundy, 73, has been fighting the government for more than 25 years over grazing rights for his cattle. He and two of his sons, Ammon and Ryan Bundy, along with Montana militia leader Ryan Payne, were considered the leaders of what the government alleged was a massive conspiracy to assault law enforcement officers a few miles from the Bundy ranch near Bunkerville in April 2014. A tense standoff occurred after federal agents tried to execute a court order to round up Cliven Bundy’s cattle.

“The government has zero chance of overturning the dismissal of the indictment,” Cliven Bundy lawyer Larry Klayman said this week. “The sole purpose for the appeal by the U.S. attorney’s office was to try to cover its tracks in committing gross prosecutorial misconduct, and this has to be evident to the 9th Circuit.”

Klayman, a nationally known conservative lawyer who faces his own legal ethics allegations in Washington D.C., said Bundy has gone back to ranching in “the land that he loves.” Klayman denies the allegations against him, which he claims are politically motivated.

In the aftermath of the Bunkerville standoff, the government spent more than three years bringing Bundy to trial. But it took only two months for the case to collapse in court.

Court records show prosecutors deceived the presiding federal judge, repeatedly ignored the law and failed to provide the defense with evidence that could have harmed the government’s case.

By the time prosecutors started turning over hundreds of pages of documents under court orders after the trial began in November 2017, it was too late to save the case.

The missteps tarnished the reputation of the Nevada U.S. attorney’s office and left the rest of the criminal case in disarray.

Seven other defendants had earlier pleaded guilty without having the benefit of the favorable evidence. Two more defendants were convicted at a separate trial in 2017, including one who is serving a 68-year prison term.

Navarro also dismissed the cases against Ammon and Ryan Bundy and Payne in January 2018. She later tossed out the charges against two other sons, David and Melvin Bundy, who were to be tried separately from their father.

The one-day standoff ended without injuries after Bureau of Land Management officers, under pressure to avert bloodshed on both sides, abruptly called off a court-ordered roundup of Bundy cattle on federal land.

In her decision, Navarro said the government misconduct during the case was so outrageous that she banned prosecutors from refiling the charges. A jubilant Cliven Bundy, after spending two years behind bars waiting to be tried, walked out of the courtroom a free man in January 2018.

Douglas McNabb, a criminal defense lawyer with offices in Houston and Washington, said at the time that Navarro’s decision likely would have a nationwide impact on the justice system.

“I think it will reverberate across the country and will remind prosecutors on both the federal and state level that they need to be careful about disclosing exculpatory information,” he said.

“They’re not going to take this dismissal and let it stand, because it will forever be a stain on them,” he said.

Prosecutors filed notice of their appeal in August 2018, and months later submitted their opening brief with the San Francisco-based 9th Circuit.

Office under a cloud

Fallout from the government’s actions was felt within the U.S. attorney’s office. The lead case prosecutor, Steven Myhre, was removed as acting head of the office, and an interim U.S. attorney was brought in from outside Nevada to take control. Myhre remains a prosecutor under new U.S. Attorney Nicholas Trutanich, who was nominated by President Donald Trump and confirmed by the U.S. Senate in January.

Trisha Young, a spokeswoman for Trutanich, declined to discuss the appeal this week.

“We defer comment until after the Court has issued an order or opinion,” Young said.

In court papers opposing the dismissal in 2018, Myhre and other Bundy prosecutors denied wrongdoing.

“Throughout this case, the government has acted in good faith to produce voluminous discovery that it believed went above its constitutional, statutory, department and court-ordered obligations,” they wrote.

“The government did not withhold material to gain a tactical advantage or harm the defendants. Rather, it litigated these issues in good faith, arguing the materials were neither helpful nor material and provided reasoned explanations for its decisions.”

Several former federal prosecutors interviewed by the Las Vegas Review-Journal at the time all described the dismissal as rare.

“This is a prosecutor’s worst nightmare,” said Charles La Bella, a former deputy chief in the Justice Department’s Fraud Section. “Not only is your case thrown out, but now you are under the microscope, and everybody is going to be second-guessing what you did and how you did it.”

Added Paul Padda, a former prosecutor in the U.S. attorney’s office: “This is more than just a defeat for the government. It’s a complete rebuke of the manner in which the government sought to selectively present the evidence.”

Kathleen Bliss, another former prosecutor in the office, said, “It’s the worst blow that can possibly happen to a prosecutor, because prosecutors should know that it is not about winning. It’s about serving justice.”

Defense lawyers said they had fought for months prior to the Bundy trial to force the government to turn over evidence that would aid the defense. But their efforts always came up short.

Ryan Bundy claimed in court documents that federal agents had secretly videotaped the Bundy home before and during the standoff. Ammon Bundy insisted the government had snipers perched above the Bunkerville ranch.

Prosecutors disparaged the defense requests, calling them fishing expeditions or efforts to distract the judge.

“The government continued to play coy and was insisting that none of the documents were relevant or material to the case,” said Dan Hill, who defended Ammon Bundy. “Their attitude was indignant. They were insinuating that the defense was just playing games.”

Then the defense got a break.

In late October 2017, a week before the trial, Navarro held a hearing on a defense motion to dismiss the case because of government misconduct over the shredding of sensitive BLM documents during the standoff.

Mary Hinson, former chief ranger at Lake Mead National Recreation Area, testified that she recalled seeing a live video feed of the Bundy home during the standoff. Navarro denied the motion to dismiss, but at the defense’s request, she ordered the government to turn over what it had on the feed.

Days after Navarro seated a jury, prosecutors gave defense lawyers documents confirming that the FBI had been running a live feed that was being viewed at the BLM command post near the Bundy ranch.

Documents also showed that the FBI stationed SWAT snipers near the ranch in the days before the standoff. That prompted Navarro to order prosecutors to provide the defense with documents about the snipers.

During the trial, government witness Mary Jo Rugwell, a former BLM Southern Nevada office manager, testified that the government possessed threat assessments that suggested the Bundys were not violent.

That led to still more documents being turned over to the defense.

Eventually, Navarro concluded that the government had not been candid with her and had undermined the confidence of the outcome of the trial. She granted a mistrial Dec. 20, 2017 and then dismissed the case the next month.

“This is not how cases should be won,” said Assistant Federal Public Defender Brenda Weksler, who represented Ryan Payne. “The jury should be able to make an informed decision of guilty or innocent based on the entire evidence.”

Weksler, now a U.S. magistrate judge in Las Vegas, and her partner, Assistant Federal Public Defender Ryan Norwood, said at the time that Navarro averted what could have been a “travesty of justice.”

Veteran lawyer Bret Whipple, who defended Cliven Bundy during the trial, added: “It’s a perfect example of what should never happen — getting a conviction at all cost.”