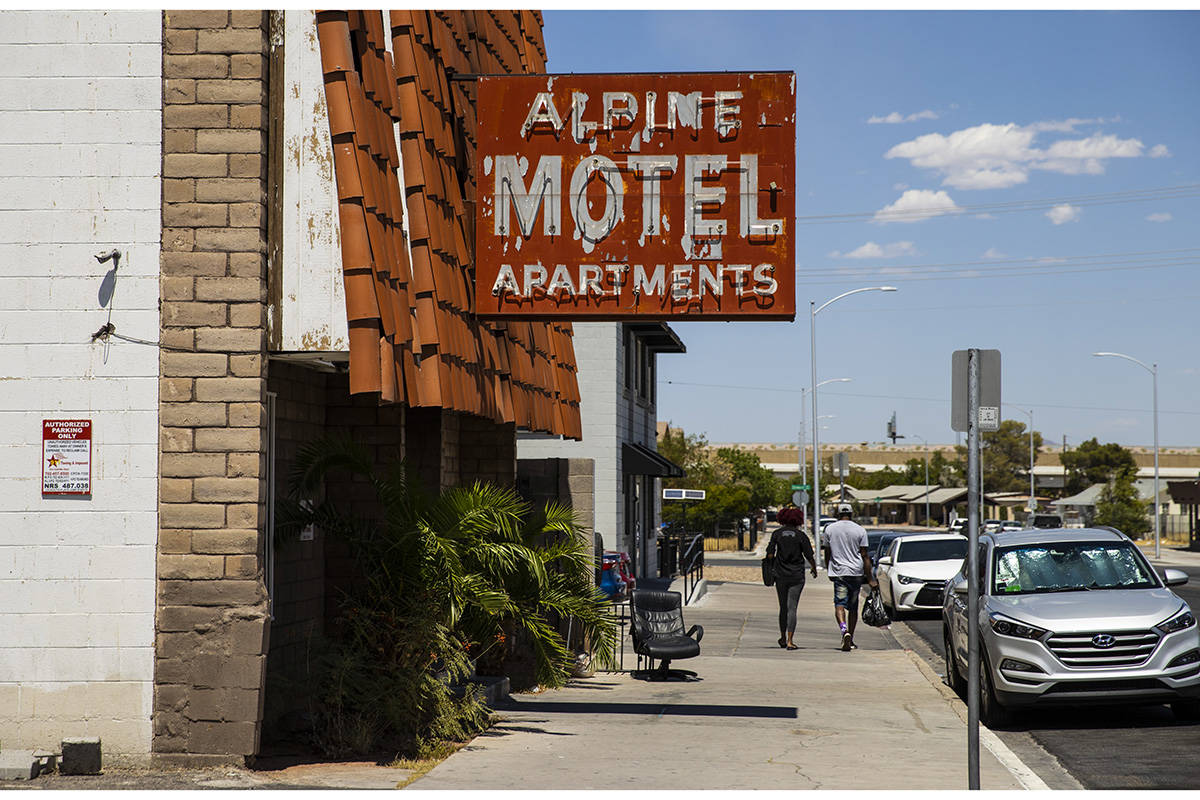 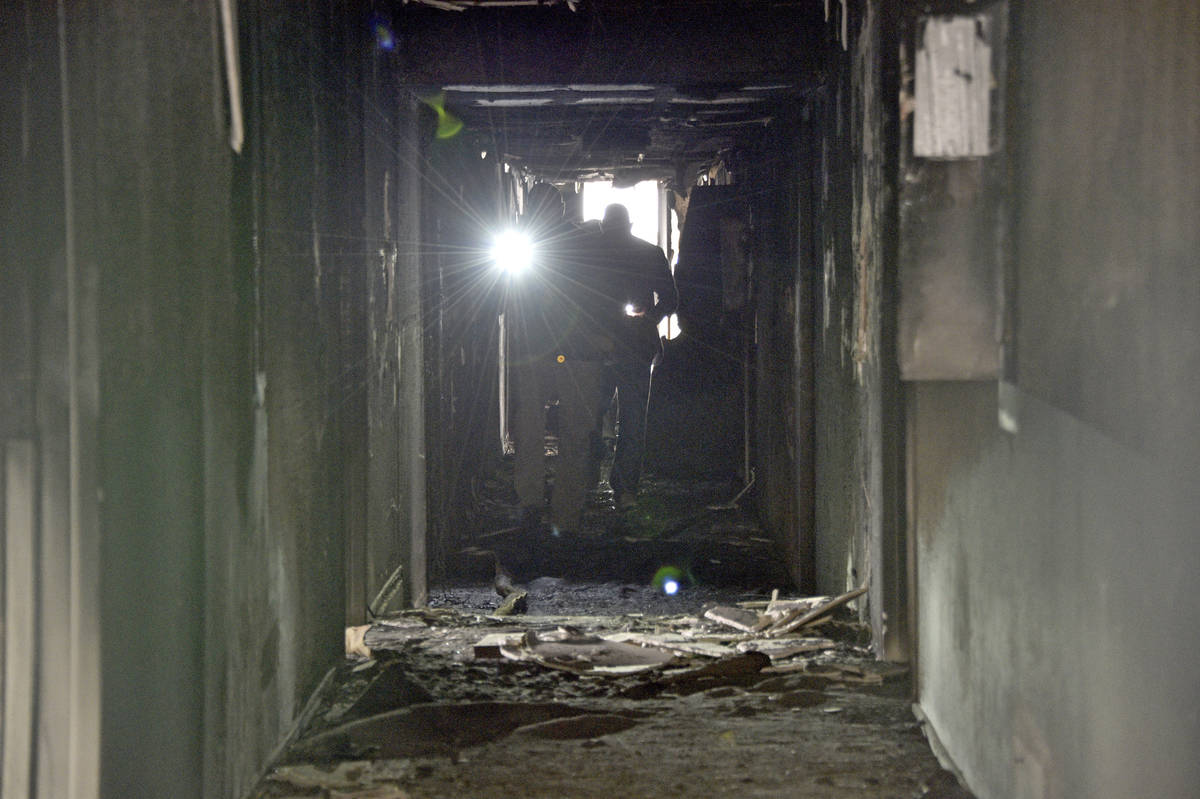 Investigators walk through an interior corridor Dec. 21, 2019 after an early-morning fire at the Alpine Motel Apartments in Las Vegas. The fire was in first-floor unit of the three-story apartment complex. Six died and 13 were injured. (AP Photo/David Becker)

Council members approved the reforms nine months after a blaze at the Alpine Motel Apartments killed six people and injured 13 in December, the deadliest residential fire in city history. Inspectors found 42 fire code violations at the property in the two days following the fire.

“To me this was absolutely beyond significant and needed to be addressed,” Mayor Carolyn Goodman said.

The changes come after Review-Journal investigations showed the Alpine had a history of failed inspections that spanned more than a decade, and that it had not been inspected for more than two years leading up to the deadly fire. Records show Las Vegas police tried to shut down the property as a chronic nuisance three years before the fire, but city officials opposed the action.

The city will expand a program launched in August 2017, designed to reduce residential fire fatalities by taking a more proactive approach to code enforcement. The changes will better focus the program on dangerous aging properties, which often serve low-income tenants and lack modern fire safety equipment.

Once a year, city officials will analyze a combination of code enforcement, fire prevention and police data to identify problem properties. Landlords who don’t fix their properties could face fines as high as $1,000 per day.

“The penalty part of this is more aggressive to those who simply decide they don’t want to follow the rules,” Las Vegas chief sustainability officer Tom Perrigo told the council.

Perrigo said he expects the program to be fully implemented by the end of the year. Some aspects of it will require the city council to pass additional measures at future meetings.

The revamped program will give landlords less time to fix both mundane and serious issues. Fire safety violations, like the ones found at the Alpine, must be fixed within 24 to 48 hours.

Councilman Brian Knudsen said he’d like to see another measure come before the council at a future date that would help ensure landlords couldn’t recoup such fees by charging their tenants more.

“I would hate for a tenant to be penalized for a landlord’s bad actions,” he said.

City staff said tenants will also be able to file anonymous complaints to code enforcement officials now, so that they do not have to fear retribution from their landlord.

Councilman Cedric Crear, who represents the city ward where the Alpine is located, called Wednesday’s vote a “great first step” to addressing neglected rental properties. He added that he’d like to review the program on a regular basis to see how it could be improved.

“It’s unfortunate that bad things have to happen sometimes for good things to happen,” he said, referencing the fire.

Some critics of the city’s handling of the Alpine say they remain skeptical of how effective the reforms will be.

“It’s a matter of what they do about it,” said Father Courtney Edward Krier, whose church is near the Alpine. “Where was code enforcement during this previous event?”

Donald Walford, a downtown businessman who is part of a group dubbed the “God Squad” that is trying to clean up the area, said the new rules were not needed to shut down problem properties.

“They had the power all the time to close this business and there was no reason it had to take six people to die,” he said. “Code enforcement never followed up to the property owner to make those repairs.”

Las Vegas attorney Robert Murdock, who is representing an Alpine resident who was severely injured during the fire, pointed to city emails which showed that in April 2019, a Homeland Security special agent requested that local officials stay away from the properties. Alpine Motel Apartments owner Adolfo Orozco and his properties were part of an ongoing federal investigation at the time, the emails show.

“You can make all these changes that sound great, but at the end of the day if you’re going to follow the mandates of the Department of Homeland security or another federal agency, all the changes really aren’t going to do much,” Murdock said.

The emails raised questions about whether the federal investigation contributed to the lapse in fire inspections. Fire, police and city officials have declined to comment on the matter.

Walford said the public deserves to know what failed at the Alpine.

“These people are public servants,” he said. “We should know where ball was dropped and what cracks it fell into. We’d hate for something more to happen and more people to die.”