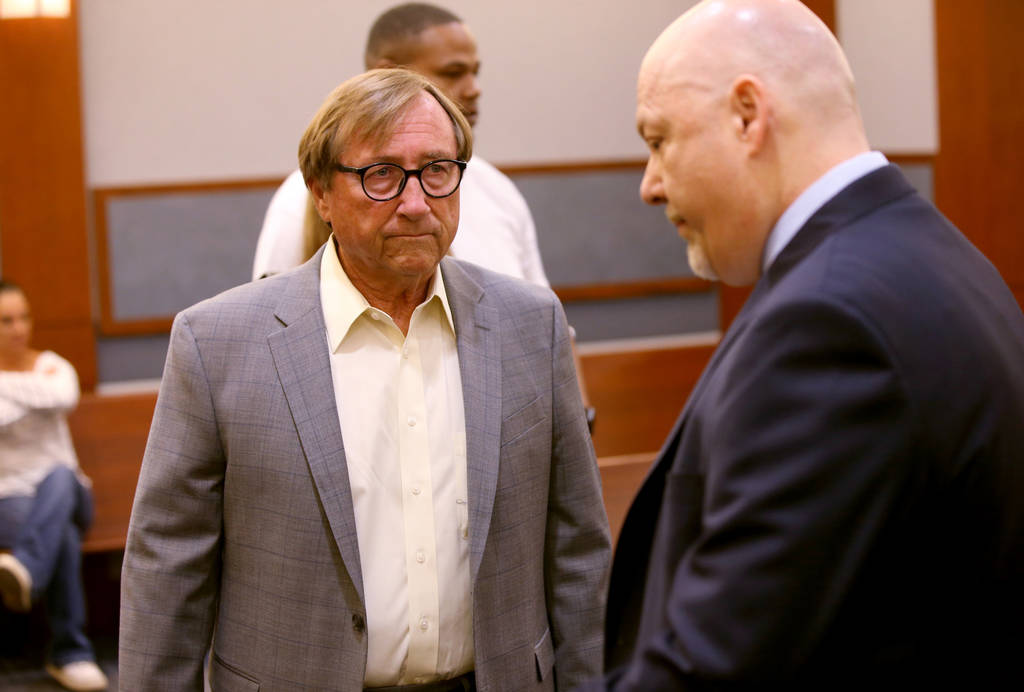 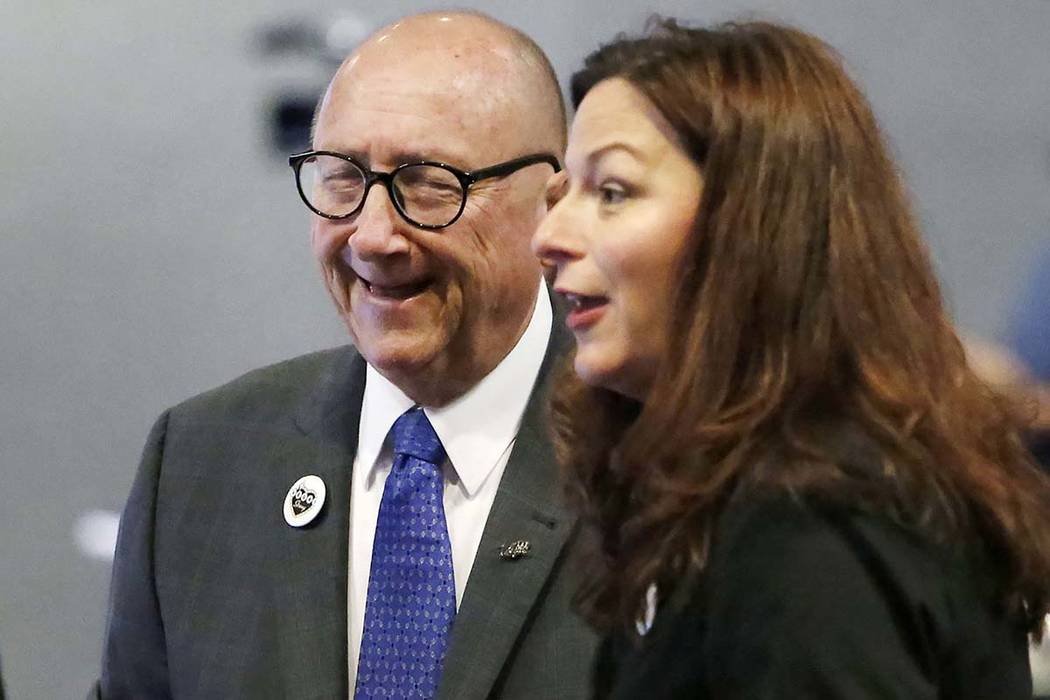 Rossi Ralenkotter, then-president and CEO of the Las Vegas Convention and Visitors Authority, and Cathy Tull, then-senior vice president of marketing, at a board of directors meeting on Oct. 10, 2017. (Bizuayehu Tesfaye/Las Vegas Review-Journal) @bizutesfaye 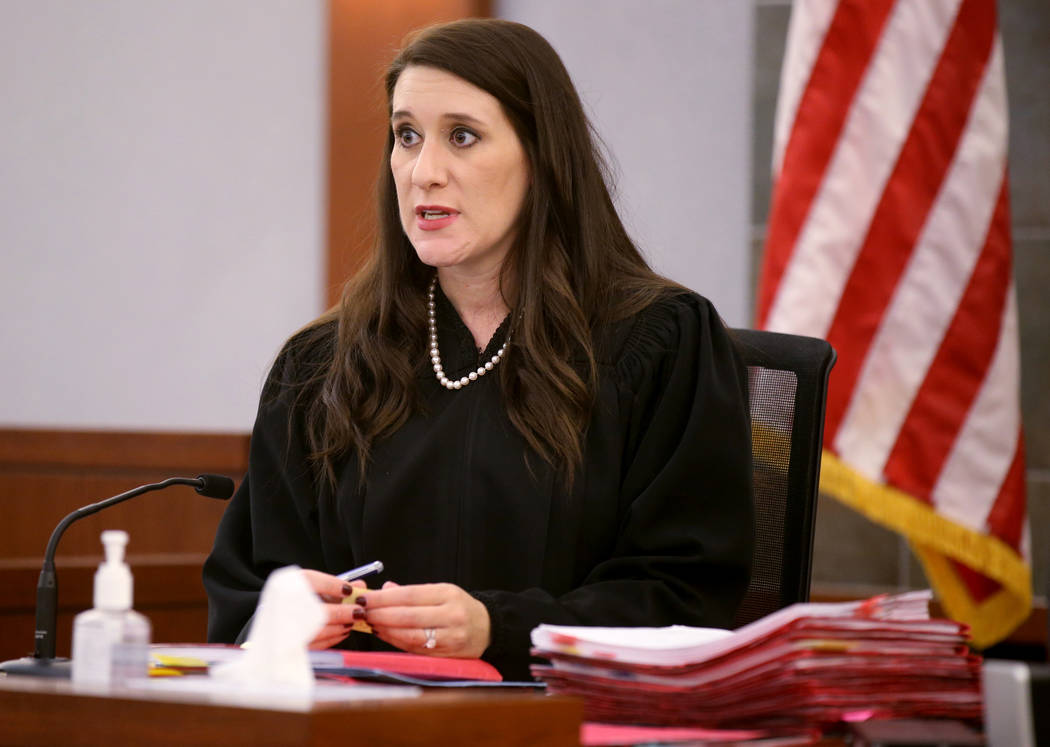 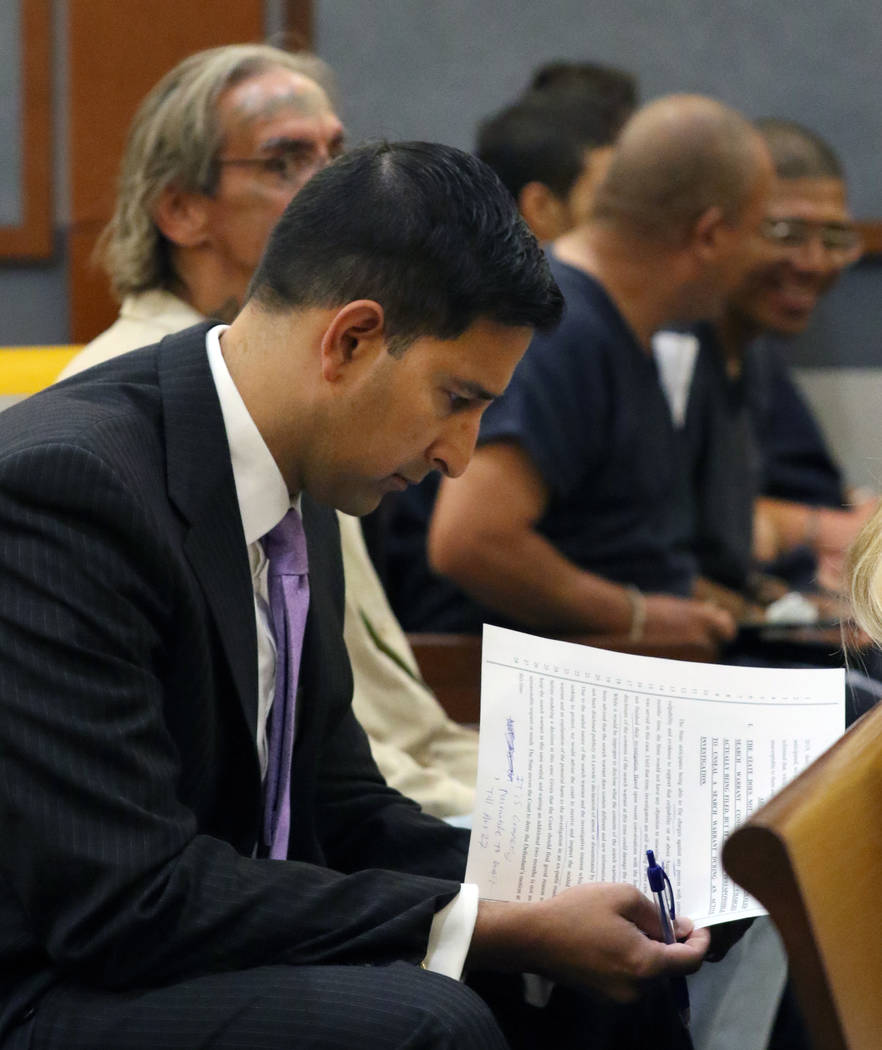 “These defendants are not in the system,” said Todd Leventhal, a veteran defense lawyer and former prosecutor not involved in the case. “Everybody who’s been charged should be in the system.”

At a public hearing in September, defense lawyer Anthony Sgro promised to arrange Ralenkotter’s surrender on felony charges. Sgro asked Justice of the Peace Harmony Letizia to quash an arrest warrant for the retired Las Vegas Convention and Visitors Authority CEO to avoid the possibility of Ralenkotter being stopped by police and taken into custody.

But the politically connected Ralenkotter was never taken to the detention center for a routine “walk-through” procedure that allows a defendant to be photographed and fingerprinted without spending time behind bars.

The criminal case was the result of a yearlong police investigation prompted by Review-Journal stories disclosing audit results critical of the agency’s purchase of Southwest Airlines gift cards. The audit was ordered amid a Review-Journal investigation that revealed wasteful spending and poor oversight at the convention authority.

Exactly why Ralenkotter and the other defendants were not processed remains a mystery because key players involved in the high-profile case are not talking.

Sgro has not responded to repeated calls and text messages seeking comment, and an assistant to Letizia said judicial rules do not allow the judge to discuss a case outside the courtroom.

The actions coming from the Sept. 10 hearing were not typical, according to Justice Court sources, current and former prosecutors and defense attorneys. Judges generally don’t recall arrest warrants before the booking process is completed.

“You don’t quash it first,” one Justice Court source said. “You’re taking it out of the system as if it doesn’t exist. You can’t book someone on a warrant that doesn’t exist.”

Las Vegas police did not respond to questions about the walk-through process. But they acknowledged that they don’t have mugshots for Ralenkotter, Tull and Woodson, which they said would have been taken during a walk-through.

“If defendants don’t follow through with a walk-through, they could be in trouble with the court,” criminal attorney Chris Rasmussen said.

But the court docket shows that Letizia has not taken any action against the defendants in the LVCVA case.

“If the district attorney had objected to quashing the warrants, there might have been a different outcome,” said longtime lawyer Thomas Pitaro, a former UNLV law professor.

Both Sgro and Ralenkotter appeared before Letizia on Sept. 10 to respond to the arrest warrant.

“So the first step is to get that warrant taken care of, OK,” Letizia told them, according to a Review-Journal recording of the proceeding. “So Mr. Ralenkotter is going to need to go over to the jail and get processed. He’s not going to be held overnight, but he does need to get processed.”

Letizia said she expected the walk-throughs for Ralenkotter and Woodson to “happen immediately” and that her office would prepare the paperwork. Tull was out of the country and planning to return.

“So it’s not going to be an active warrant anymore, right?” Sgro asked Letizia.

“Technically, the warrants are going to remain active until they get over to the jail and get processed,” Letizia responded. “If they leave and don’t take care of that and Metro stops them for any reason, traffic or otherwise, jaywalking, anything, they could get booked on the warrants. So time is of the essence.”

Sgro then asked the judge to temporarily stay execution of Ralenkotter’s warrant or quash it because he needed time to arrange the walk-through with detention center officials.

“If you gave us a couple of days, for example, that no action would be taken on the warrant, then within that time frame we would make sure that everything on our side was done,” Sgro said.

Letizia asked Raman if he opposed recalling the warrants, and he responded, “I don’t have a position on it.”

The judge then ordered the warrants quashed, and set a status check in the case for Sept. 25. The defendants’ lack of walk-throughs was not discussed at the status check.

Leventhal said the video of the Sept. 10 hearing shows Sgro made it clear that he planned to surrender Ralenkotter and that may have influenced the decisions of both Letizia and Raman.

“To suggest that it takes time to set this up with the jail is ludicrous,” Leventhal said. “The jail is open 24 hours, seven days a week and handles these issues all day long.”

Defense lawyer Paola Armeni, who represents Tull, said Letizia later recalled the arrest warrant for her client, and she was told that Tull did not have to surrender to detention authorities. Armeni had filed a motion seeking to quash the warrant after the Sept. 10 hearing.

“If I felt like she had to do a walk-through, I would have done that,” Armeni said. “But I don’t think that was the court’s order.”

Woodson’s lawyer, Pete Christiansen, did not return calls for comment.

Letizia has set a March 26, 2020, preliminary hearing to determine whether to move the case to Clark County District Court for trial.

Raman, who was spearheading the LVCVA prosecution, has been reassigned to another unit and taken off the case. In response to a request for comment about the no-shows at the detention center, Raman referred questions to Assistant District Attorney Christopher Lalli, who has not returned calls. Raman did not respond to a call about his transfer.

In an Oct. 22 memo circulated within the office, Clark County District Attorney Steve Wolfson praised Raman’s leadership as chief of the major fraud unit, but said it was a “good time to make a change” there. Wolfson did not link Raman’s reassignment to the LVCVA case.

The district attorney said Raman was being assigned to a suburban courtroom track for prosecutors, and he congratulated Raman’s successor, Chief Deputy District Attorney Richard Scow.

Ralenkotter, Tull and Woodson are listed as free on their own recognizance. Tull and Woodson, who works for Southwest Airlines in Dallas, have yet to even make appearances in court. Lawson was arrested and processed at the detention center in March and later released. Records show he is now free on no bail.

The criminal complaint alleges that Ralenkotter used roughly $16,000 in Southwest Airlines gift cards on personal travel, and Tull bought airline tickets for herself and family members with $6,000 in gift cards. Both executives reimbursed the LVCVA and left the agency before they were charged.