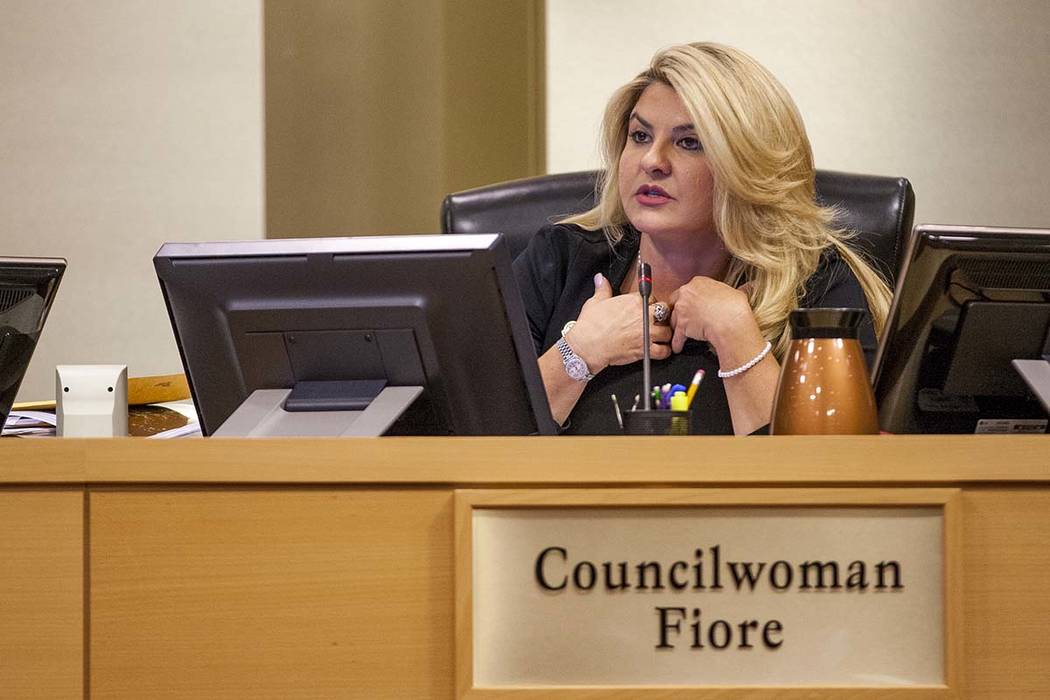 But she has not been shy over the past two years about liberally spending campaign and political action committee funds on goods and services that push the limits of the state’s campaign finance law.

Fiore, who was elected to the council in June 2017, has spent nearly $200,000 on gasoline, Uber rides, travel, restaurant and grocery store tabs, furniture and her own businesses, records show.

In a written statement to the Review-Journal, Fiore denied any wrongdoing, explaining that the money went toward unprecedented community outreach and other official duties. She said her Future for Nevadans PAC primarily pays for “constituent services.”

“Ward 6 has more constituent outreach and constituent events than any other ward,” Fiore wrote, adding that she has been transparent in her campaign reports and with her constituents.

Not everyone is convinced.

Bradley Schrager, a campaign expert and former attorney for the Nevada Democratic Party, is among those questioning Fiore’s spending.

“Not only are these expenditure levels and items abnormal, they are way beyond anything I have seen in my years as a political law attorney,” Schrager said. “It is not plausible that an elected official would need to spend this kind of campaign money in the first year of a four-year term, after being elected.”

Wayne Thorley, deputy secretary of state for elections, said the Nevada campaign finance law prohibits spending on personal items, but he acknowledged the wording is not clear.

In the past two years, Fiore spent political funds on meals totaling more than $16,000 at one local Italian restaurant, filled up her gas tank at a cost of $4,000 and took about $2,500 in Uber rides, records show. The bills at the restaurant, Lino’s, are described in her campaign reports as expenses for paid staff, volunteers and special events. A manager there declined to comment.

Fiore, a former assemblywoman, bought more than $6,000 in furniture, which she said went to her City Hall office. She spent an additional $21,000 at grocery stores and big-box chains like Costco and Walmart. That money was described in her campaign reports as expenses for volunteers, staff and special events. Fiore also used campaign and PAC funds to buy thousands of dollars worth of bagels and donuts for staff and special events in the past two years, records show.

And she poured about $140,000 in campaign and PAC money into her consulting firm, Politically Off The Wall, and an additional $10,000 into her political magazine, Truth in Politics, from February 2017 to May 2018, records show.

In her statement, Fiore acknowledged that she spent a lot of money meeting and feeding constituents, including distributing 30,000 candy-filled Easter eggs for children in her ward.

Fiore, who has been Nevada’s Republican national committeewoman since October, often posts on social media to promote her constituent events, including pasta dinners at her home, coffee gatherings and holiday parties.

In her latest email from City Hall, she urges constituents to re-elect Mayor Carolyn Goodman and promotes an upcoming Cinco de Mayo celebration, a bluegrass festival and a movie-in-the-park night.

Fiore said in her statement that she sponsors more than 30 special events a year for tens of thousands of constituents. More than 4,000 people came to her last Easter celebration, and a Halloween event attracted 5,000 families, she said.

Her political supporters don’t seem to mind her pattern of spending. They marvel at her round-the-clock work habits and consistent efforts to connect with the people in Ward 6.

“As long as she’s following campaign laws, I have no problems with that because she’s getting results,” said Matt Passalacqua, a financial administrator who lives in Fiore’s ward. “She’s reaching out to the public, and that’s her job.”

“I have never met someone who is so dedicated to being the best that she can be in public service,” said Seaman, who is pursuing the vacant Ward 2 City Council seat. “I know that she’s constantly trying to better her ward and help anyone who needs it in her district.”

“She’s the greatest community-based politician that I’ve ever seen,” said McGowan, who helped run Fiore’s City Council campaign. “Her constituents regularly come to her house to talk about whatever issues concern them. She’s just unbelievable.”