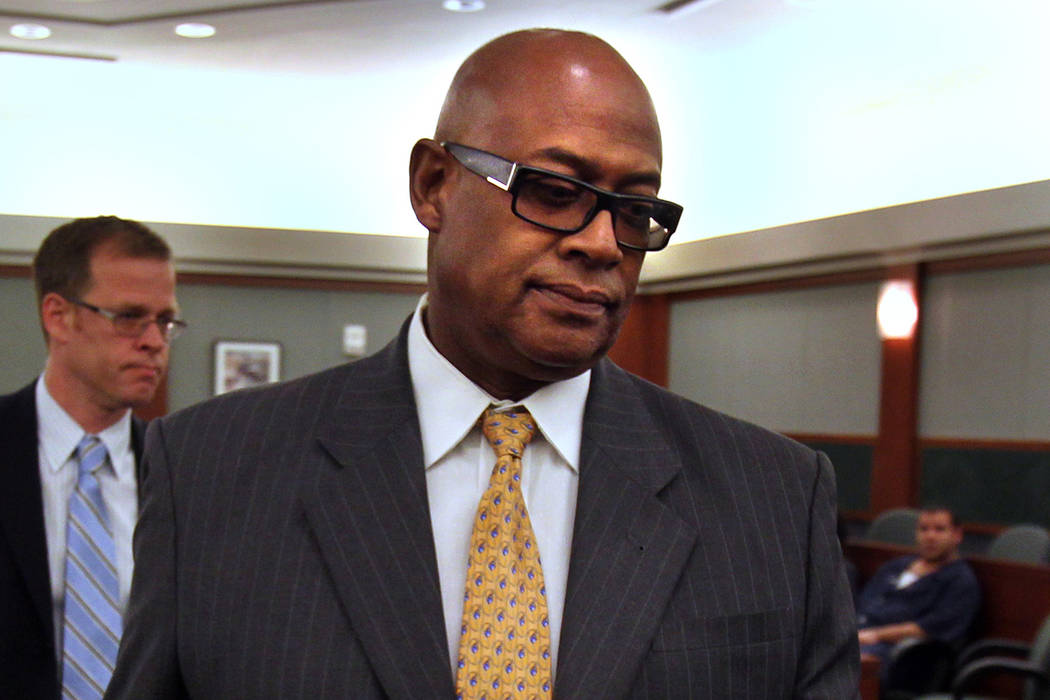 Morse Arberry, a longtime Nevada lawmaker-turned-lobbyist, leaves the courtroom at the Regional Justice Center after pleading guilty on Oct. 18, 2011. The criminal case alleged that he failed to report $121,545 in campaign contributions. (Jeff Scheid/Las Vegas Review-Journal)

Eight years after striking a plea deal to avoid prison time for misusing campaign money, Arberry has made only $1,200 in payments toward restitution, records show.

The payments were required under his October 2011 plea agreement with prosecutors and were made within a year after the former chairman of the powerful Assembly Ways and Means Committee signed the deal.

Arberry, 66, pleaded guilty in Las Vegas Justice Court to a misdemeanor charge of fraudulent appropriation of property and received a suspended six-month prison sentence. He also agreed to pay as restitution the $121,545 in contributions he diverted to his personal bank account. In return, state prosecutors dropped five felony charges against him.

Nevada Controller Catherine Byrne said collection agencies hired by her office have tried over the years to get Arberry to pay up, but have been rebuffed. The agencies now have declared the debt “uncollectible,” she said.

“It speaks to people’s character,” Byrne said. “Since (the debt) came about through an illegal activity, it gives me, as a controller, a very bleak chance of collecting it.”

Arberry, whose 25-year Assembly career ended in 2010, could not be reached for comment.

Byrne said the controller’s office has not given up pursuing restitution from Arberry and has consulted with the attorney general’s office to keep the case alive.

“We’re watching to see if there are any other means (by) which we could collect the money,” she said.

One option, Byrne added, is filing liens with the help of the attorney general’s office against any businesses Arberry might start up.

But, Byrne said, “To the best of my knowledge, he’s not doing business in Nevada.”

The state license of Titan Partners LLC, a political consulting company Arberry ran out of his 1330 Virginia City Ave. home, has been permanently revoked. But Arberry still lists the company as active on his LinkedIn account.

Byrne said Arberry contacted her office last year indicating he wanted to pay back the money.

Her staffers recalled that Arberry acknowledged owing $120,345, but asked the office to get a lien on any property he owns removed before he paid the debt. Arberry was told he would have to make payments first.

Byrne said no payments were made.

Arberry last ran for public office in 2016. He lost a bid for a U.S. House seat in the Democratic primary.

The original felony complaint against Arberry in 2011 accused him of depositing checks made out to his Assembly campaign into a personal checking account and not reporting the contributions to the state.

The list of unreported Arberry contributions included those from the politically active mining, gaming and banking industries.

Arberry resigned from the Assembly in August 2010, months before the conclusion of his final term, to take a job as a lobbyist for Clark County district judges.

But the Clark County Commission voted against approving the contract, after opponents argued Arberry didn’t take a long enough “cooling off” period from the Legislature before accepting the job.

At the time he was charged in Justice Court, Arberry’s lawyer said the former lawmaker was unemployed.

In a March 2016 Review-Journal story about Arberry’s minimal restitution payments, the controller’s office said Arberry told debt collectors that he was unable to find a job and couldn’t make payments because of fraud against him by a former employer.

The news organization reported at the time that Arberry was receiving an estimated $36,750 pension from the Public Employees’ Retirement System of Nevada.