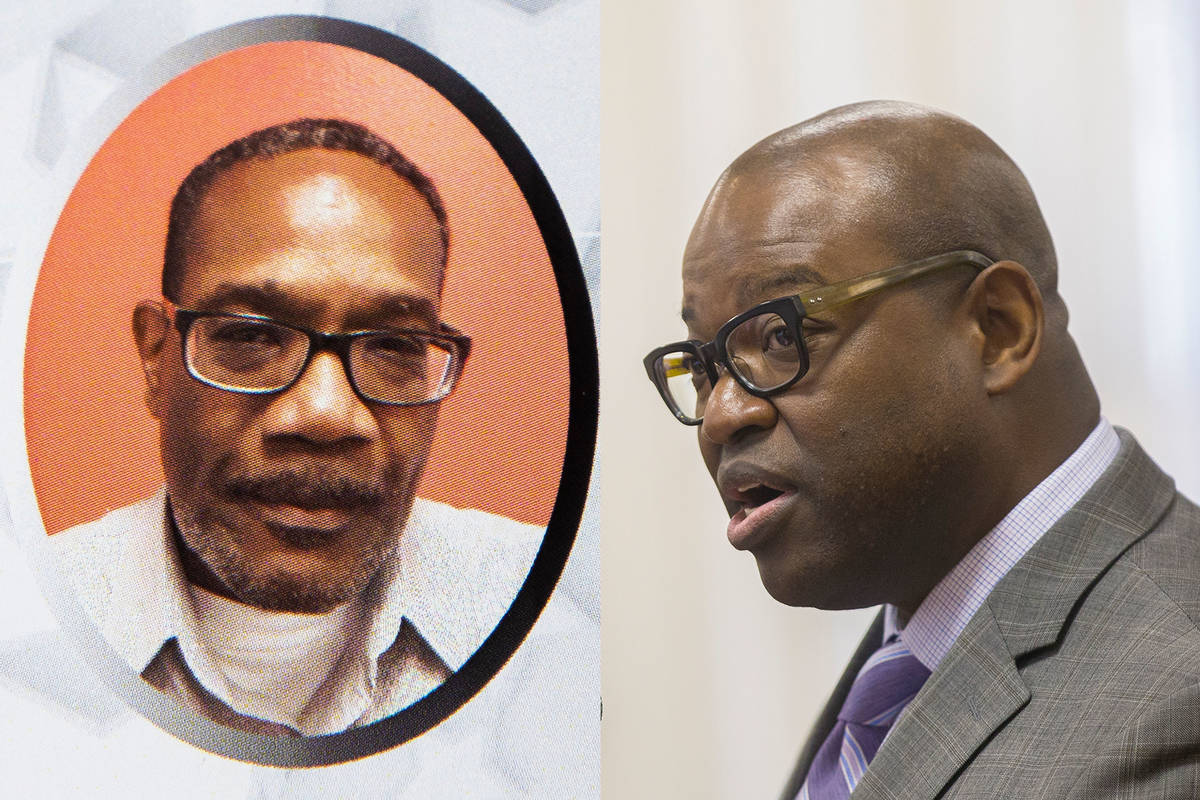 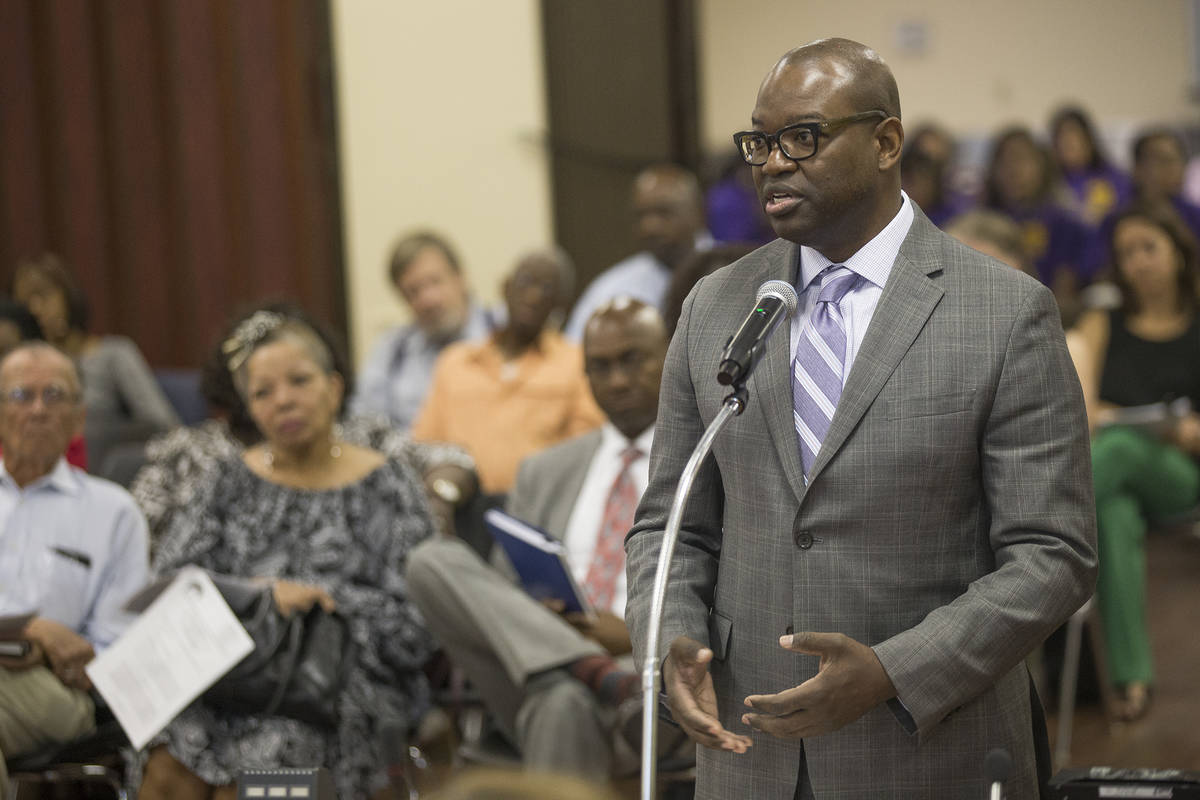 Chad Williams addresses the board of commissioners at the Southern Nevada Regional Housing Authority board meeting at the commission chambers in Las Vegas, Thursday, May 17, 2018. Chad Williams was approved as the new executive director. Rachel Aston Las Vegas Review-Journal @rookie__rae 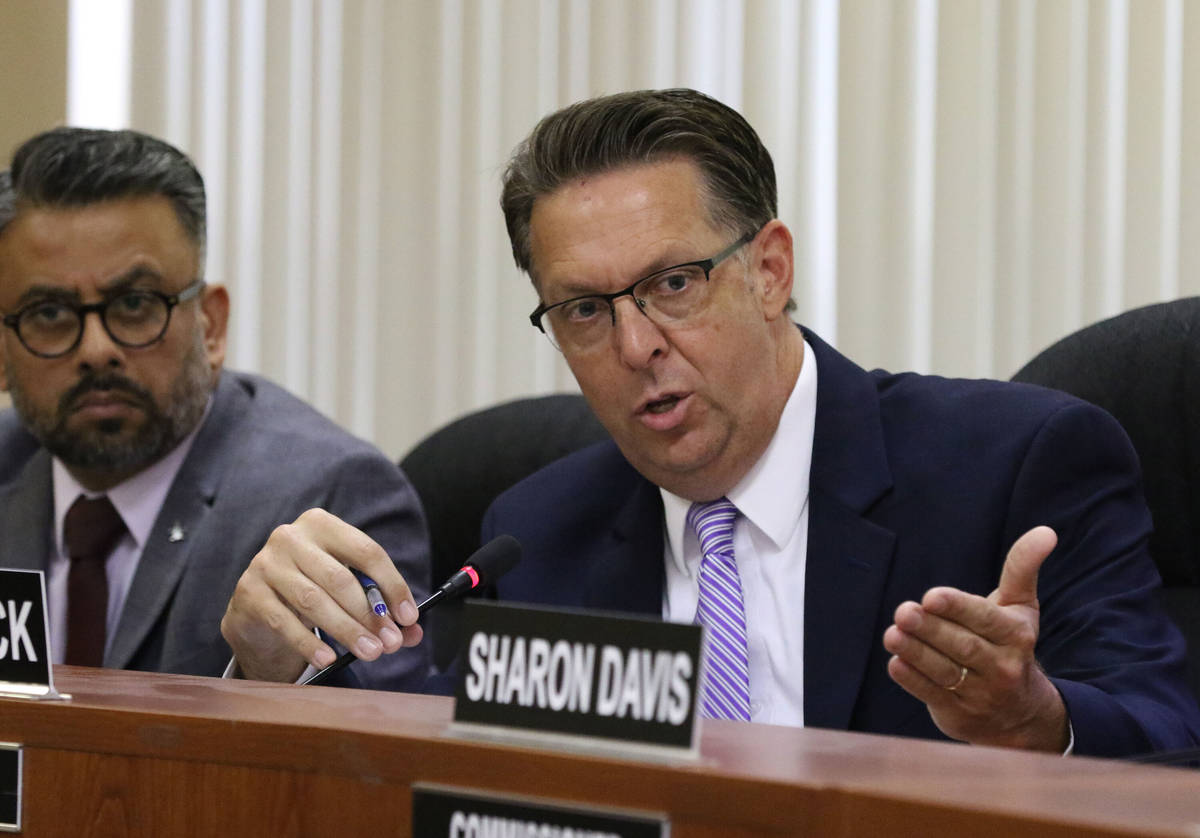 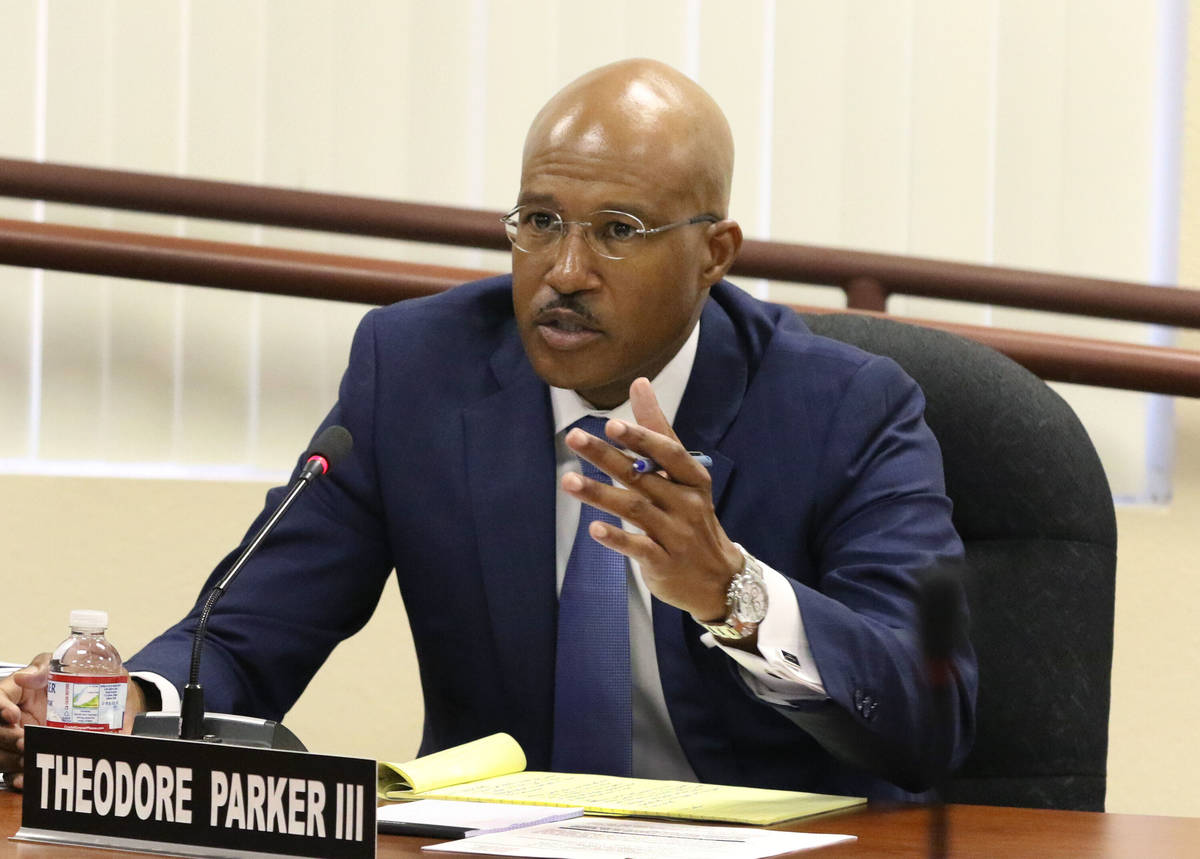 The Southern Nevada Regional Housing Authority was under federal investigation in the months leading up to the removal of the agency’s top two employees, the Review-Journal has learned.

Chief Operating Officer Theodore C. Tulle faced a sexual misconduct investigation carried out by the Office of Inspector General for the U.S. Department of Housing and Urban Development, according to government records and two employees who said they participated in the investigation.

Investigators also focused on how the housing authority internally handled complaints made against Tulle, according to one of the employees involved in the probe. One of the agency’s board members later said an investigator’s findings were critical of Executive Director Chad Williams, according to an email obtained by the Review-Journal.

Around the same time as the HUD-OIG inquiry, the housing authority launched its own investigation through an independent firm. Investigators with Reno-based Strategic HR Partners focused on the same topics, said the employees, who still work at the housing authority and were granted anonymity by the Review-Journal to protect them from potential retaliation.

The findings of the investigations have not been made public. They are being reported here for the first time and mark the second time agency leaders faced sexual misconduct allegations since Williams took the housing authority’s helm in June 2018.

The executive director himself was accused by his former secretary in early 2019. An independent investigation later found the two had engaged in an “ongoing, consensual, mutually flirtatious and personal relationship,” and that Williams had not violated the housing authority’s sexual harassment policy.

However, the board placed Williams on probation for six months at the investigation’s conclusion in August 2019 for violating other personnel policies.

The housing authority hired Tulle, 65, as the agency’s deputy executive director in January 2019. In an email to his staff, Williams, 49, wrote the two had “personally and professionally” known each other for approximately 15 years.

Tulle was placed on paid administrative leave in August 2020, where he remained until he was fired in early March, according to a source with firsthand knowledge of the matter. Financial records show the housing authority paid him more than $100,000 between August and March.

Tulle is now in the midst of the agency’s post-termination hearing process, according to his attorney Daniel Marks. He declined to be interviewed for this article.

The housing authority’s board of commissioners placed Williams on paid administrative leave in late February 2021 until his contract expired in June.

In a series of emailed statements to the Review-Journal, Williams wrote that he had enjoyed his time at the agency and that most staff there had valued his leadership. He wrote that he was on medical leave when the housing authority board voted to place him on administrative leave and that he was not notified by agency attorney Theodore Parker about the upcoming vote.

He declined to comment about allegations made against Tulle.

“I’m excited I brought pay equity to many women of color, including promoting several to executive leadership,” Williams wrote. “I am also proud that I handled personnel matters appropriately to ensure all employees were treated fairly in the workplace.”

Housing authority officials never internally announced Tulle’s departure from the agency, according to the two employees who spoke with the Review-Journal. And they still have not told employees why they placed Williams on leave.

Both of the employees who spoke with the Review-Journal said they were dismayed they and their co-workers have been left in the dark.

“How are we supposed to feel safe and protected when we don’t have any closure?” one said. “We don’t know what has happened.”

The housing authority serves approximately 50,000 low-income families, veterans, the elderly and the disabled through its public and affordable housing, as well as its housing choice voucher program.

The agency’s budget is approximately $168 million, with more than 200 employees.

Just over $145 million of its revenues come from federal funding, most of which is spent on the Housing Choice Voucher program. More than another $22 million of revenue comes from non-federal sources, primarily rent from tenants in public housing. The agency does not receive funds from local governments, said current Executive Director Jon Gresley.

As the agency’s deputy executive director, Tulle was responsible for overseeing the day-to-day operations of its public housing, admissions and other program departments.

Board members reclassified Tulle’s position to chief operating officer in May 2020, but he kept the same job responsibilities.

[ Who’s on the housing authority board? ]

Board Chair Scott Black and Vice Chair Olivia Diaz declined to comment on the investigations or the executives’ departures, as did agency attorney Parker and board members Tick Segerblom, William McCurdy II, Sharon Davis and Cheryl Davis. Commissioner Dan Shaw did not return multiple requests for comment.

Likewise, the housing authority has for months blocked the Review-Journal from accessing hundreds of pages of government emails and documents sent between board members, agency staff and investigators, including those about the sexual misconduct inquiries involving Tulle. The newspaper has sought the records through Nevada’s Public Records Act.

On multiple occasions since March, Parker has refused to release reports documenting completed workplace investigations into Tulle. Parker has stated the documents are protected from disclosure because they are “subject to an ongoing investigation.”

“It’s a widely recognized best management practice to share the most information you possibly can, and this approach goes against every management lesson in the book,” said LoMonte, director of the Brechner Center for Freedom of Information at the University of Florida.

The information obtained by the Review-Journal gives the first glimpse into what preceded the board’s decision in late February to sideline Williams months before the end of his first three-year contract with the agency.

The HUD-OIG investigation appears to have begun around September 2020, when special agent Kelly Slade requested to interview board members. The next month the housing authority’s human resources manager emailed all agency employees that they were required to participate in any “investigations conducted by the Agency, including authorized persons or entities on behalf of the Agency.”

The two employees who spoke with the Review-Journal said they were interviewed by Slade and, later, investigators with Strategic HR Partners.

The employees said Slade’s line of questioning focused on whether Tulle had ever made inappropriate sexual comments or gestures toward them or other women employed at the housing authority. Strategic HR Partners investigators focused on the same topics, the employees said.

Both employees told the Review-Journal that Tulle had commented on their appearance in the past, making them uncomfortable. One of the employees said she heard from other employees that Tulle was “very flirtatious as far as comments, very touchy touchy in the workplace, trying to constantly hug female employees, asking employees if he can take them to dinner.”

In early January, Slade emailed housing authority chair Black a copy of the findings report for the “Tulle sexual harassment investigation conducted by HUD-OIG from September to December 2020,” according to a copy of the email obtained by the Review-Journal through a public records request.

It is unclear where the federal inquiry stands. Slade described it in her email to Black as an “open investigation.”

HUD-OIG spokesman Chuck Jones wrote in an email this month that he would “neither confirm nor deny any investigative actions that may or may not be underway.”

After receiving the findings report in January, Black forwarded it to fellow commissioner Shaw, who appeared to express concern over the findings.

“I, like you, am about ready to clean house and start over,” Shaw wrote back to Black.

“I will note in my reading, that what starts out as an investigation of the Tully (sic) matter, soon turns into an all-out attack on Chad Williams,” Shaw wrote. “I would love to have a disinterested third party do an investigation of both the Tully (sic) matter and of Chad’s handling of it and other matters. To date I am not convinced that we are getting the truth from either side.”

With Tulle and Williams gone, the housing authority is now under the leadership of Gresley, a former HUD administrator. Board members voted in March to pay up to $335,000 for Gresley and Florida-based consultant CVR Associates to run the agency for nine months and help find its next permanent executive director.

Federal investigations can last anywhere from a few weeks to years, depending on their complexity, said Gregory Hill, executive director of the nonprofit Association of Inspectors General.

The details are usually kept private until they are completed, he said.

“The risk of creating briefings or providing information is then you’re starting to share your information where the investigation is going,” Hill said. “When you do that, then you run the risk of either losing or compromising evidence.”

The housing authority has also spent months withholding more than 400 pages of emails and other documents the Review-Journal has sought under Nevada’s public records law. In late June, the agency sent the documents to HUD-OIG, claiming the federal agency will determine whether to release them. A HUD-OIG official said it will take the four to six months to determine which records it will release.

Executive Director Gresley refused to answer written questions about Tulle, including how long he was on paid administrative leave and whether he even still works at the agency.

LoMonte, the government transparency expert, said the housing authority’s secretiveness is likely to sow distrust among its employees and the public.

“Undeniably, if you won’t answer a very simple basic question like that, people will be justifiably suspicious of what is going on inside that agency,” he said.

The silence by housing authority leadership has done little to ease tensions among agency staff, according to one of the employees who spoke with the Review-Journal.

“They don’t want to look bad, so they just swept it under the rug,” the employee said.