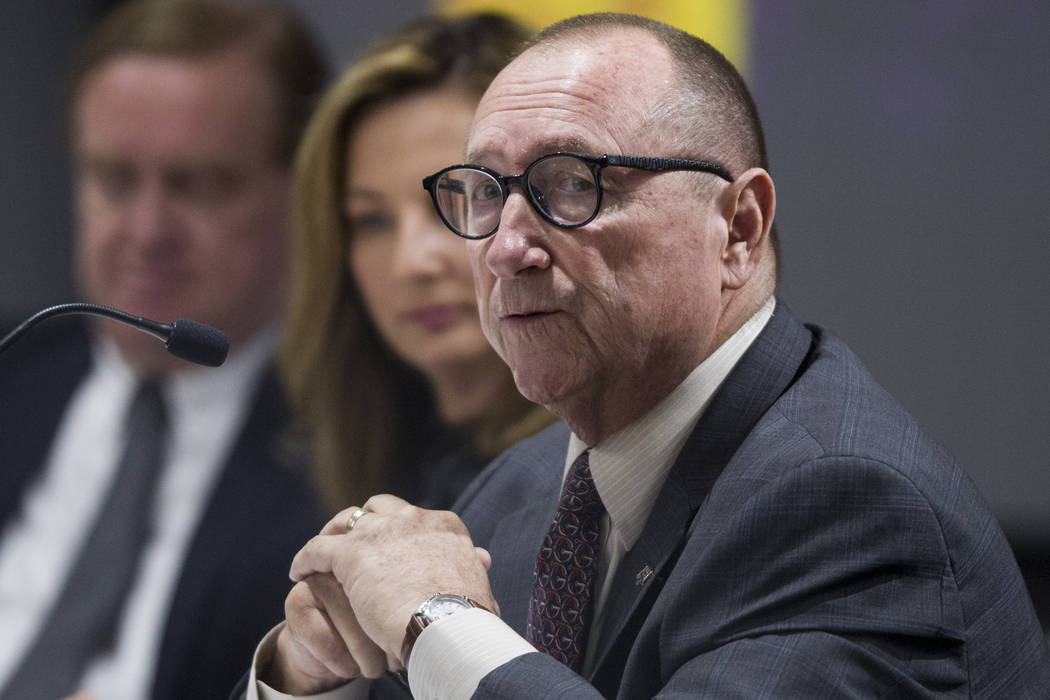 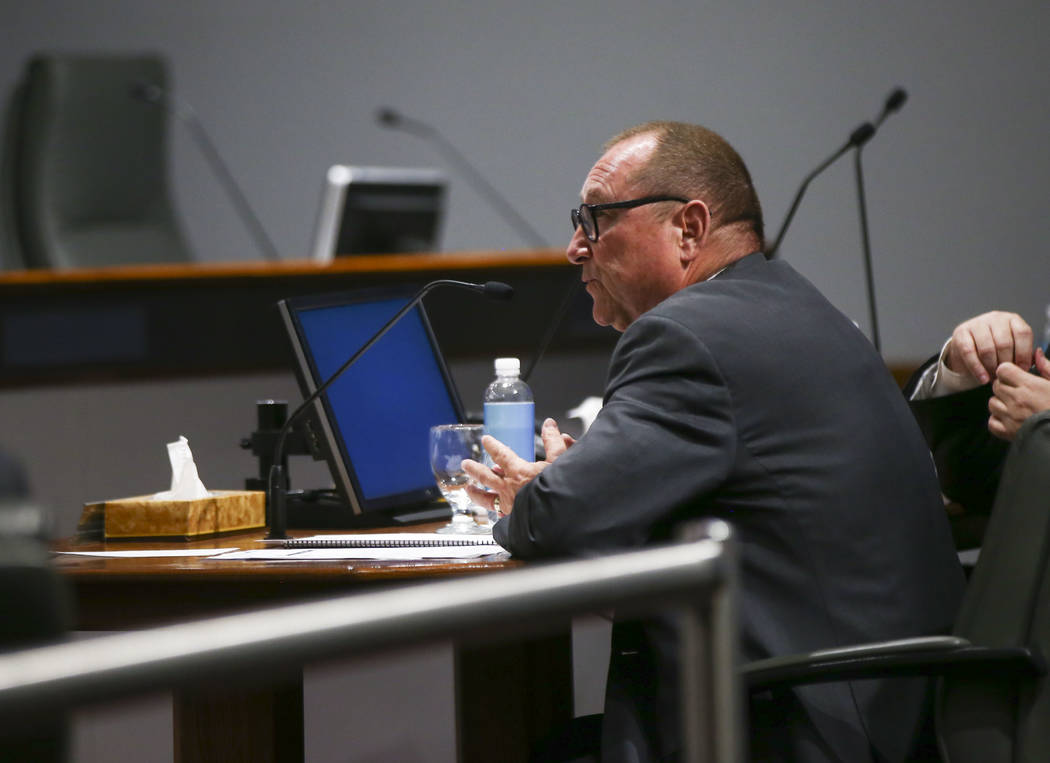 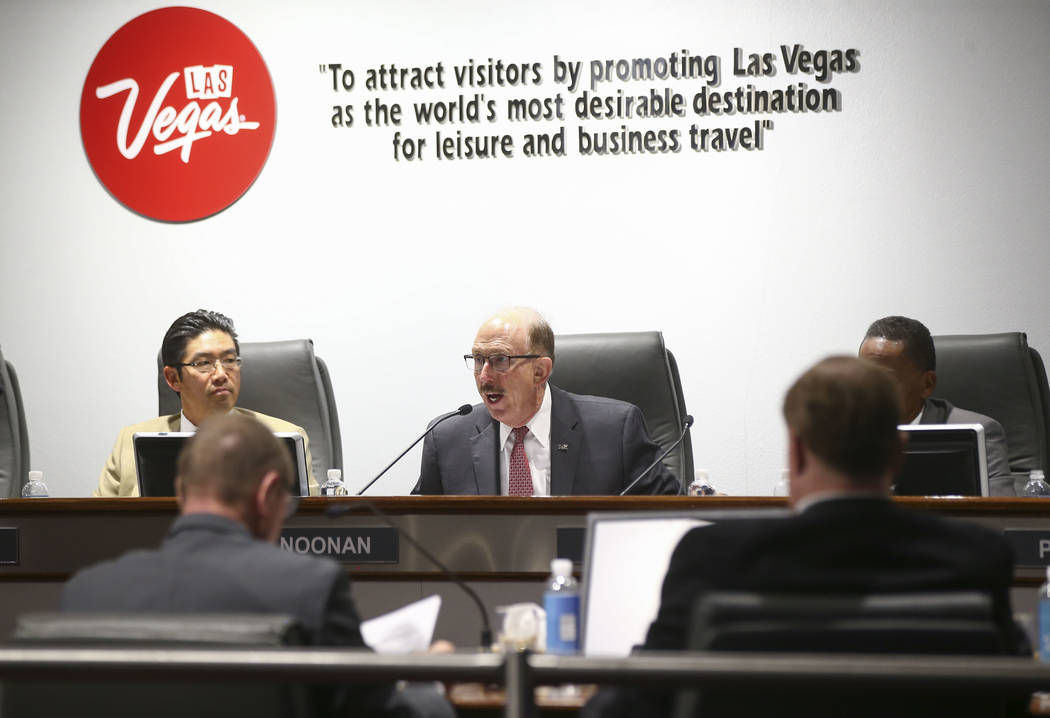 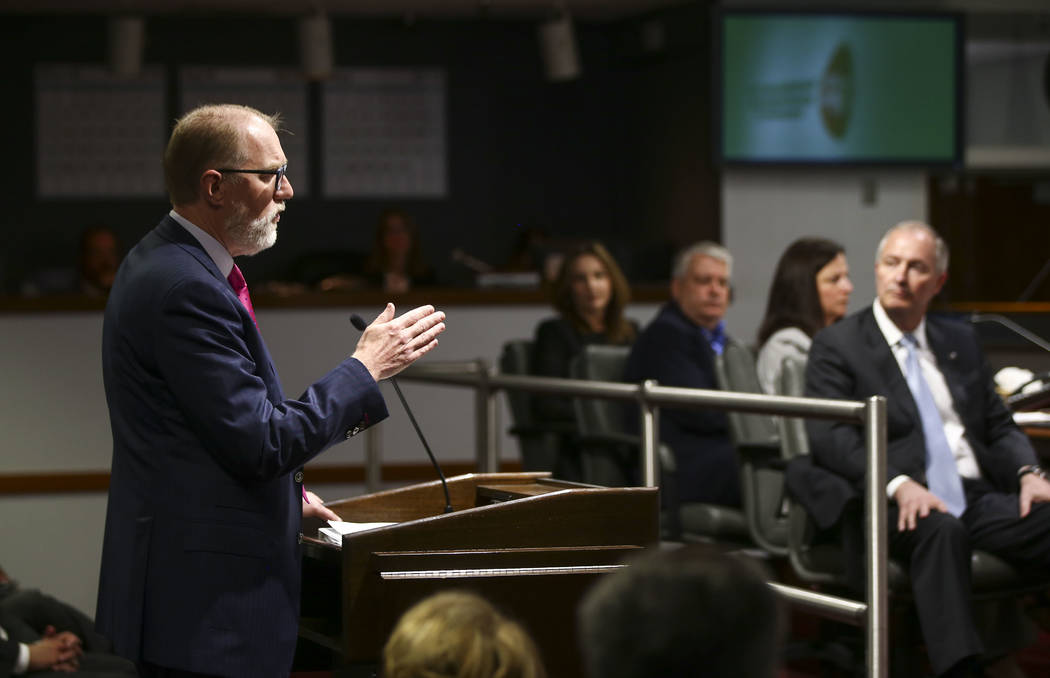 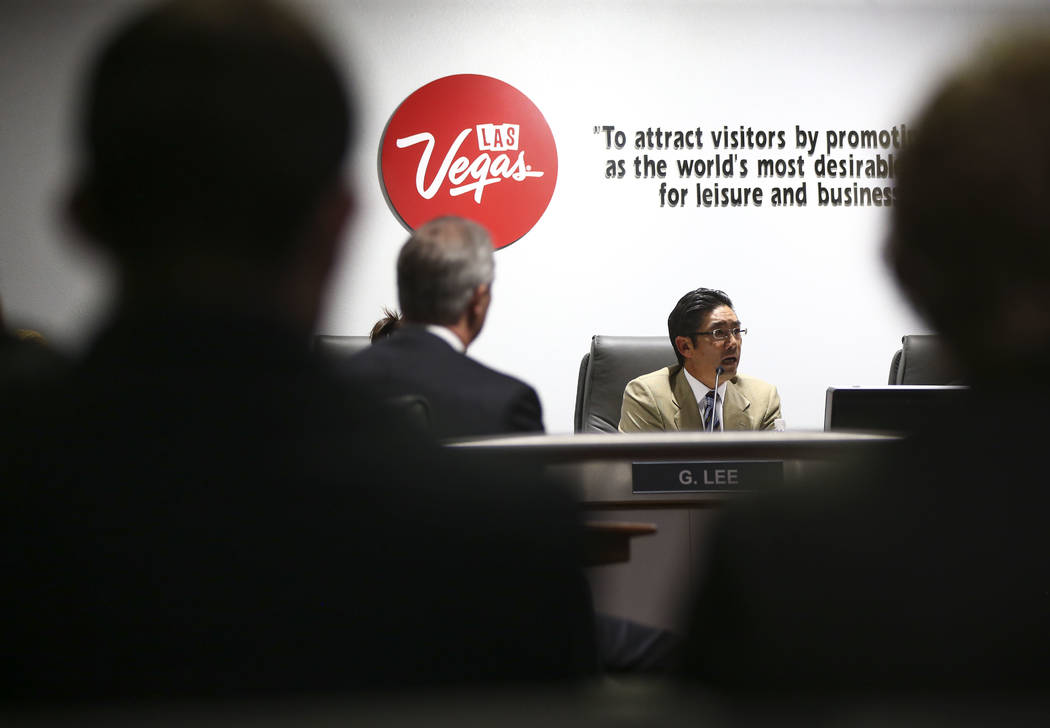 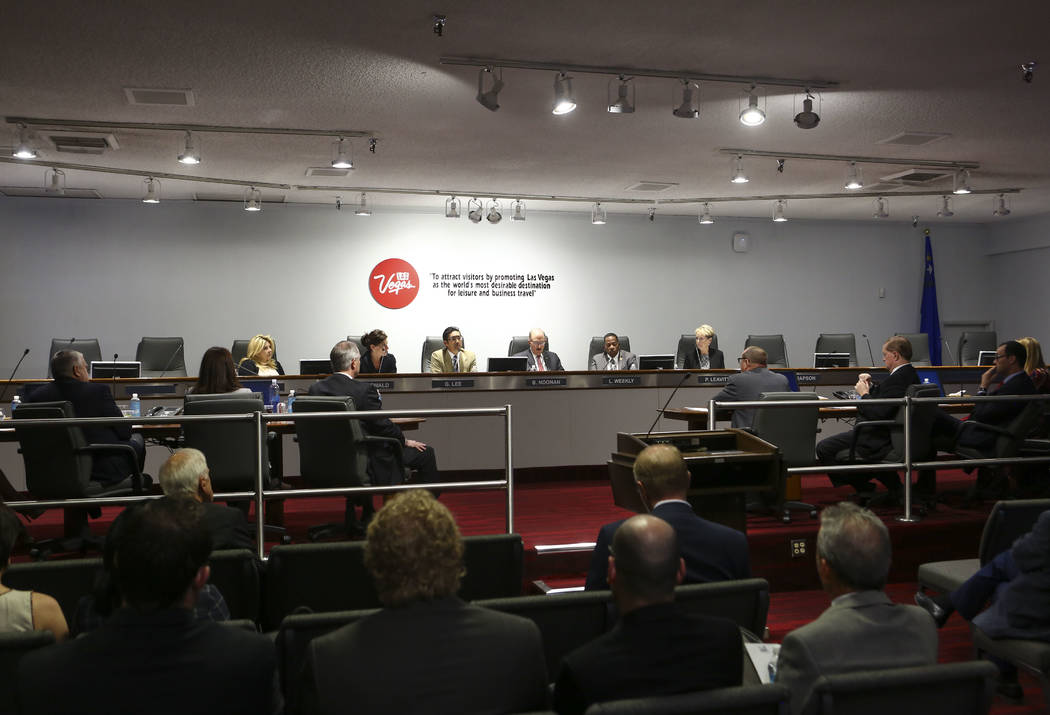 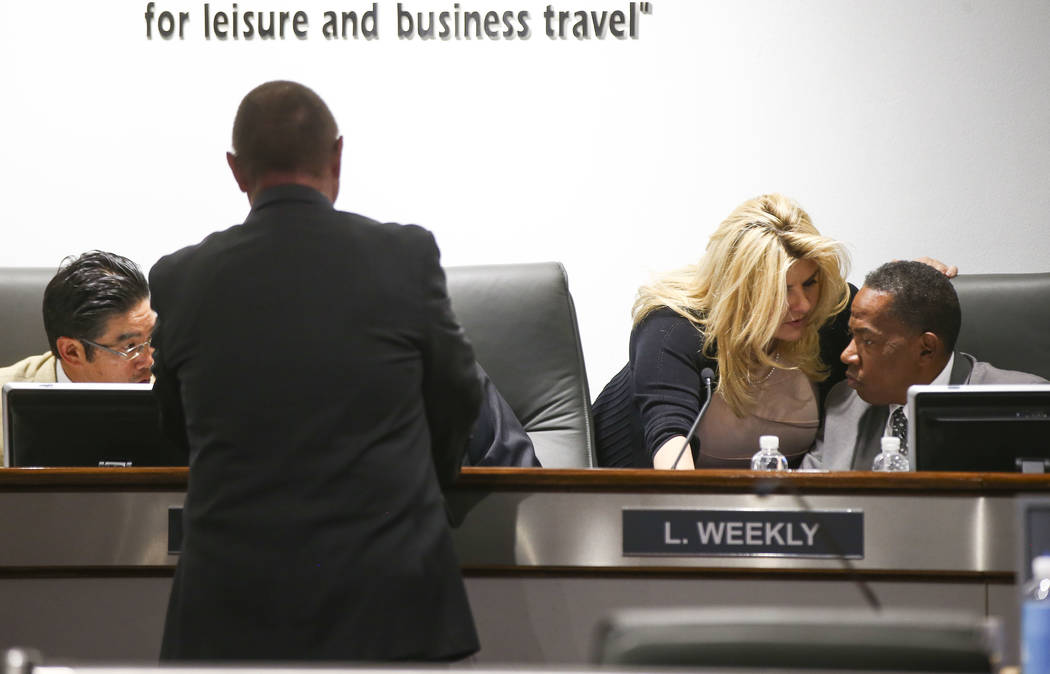 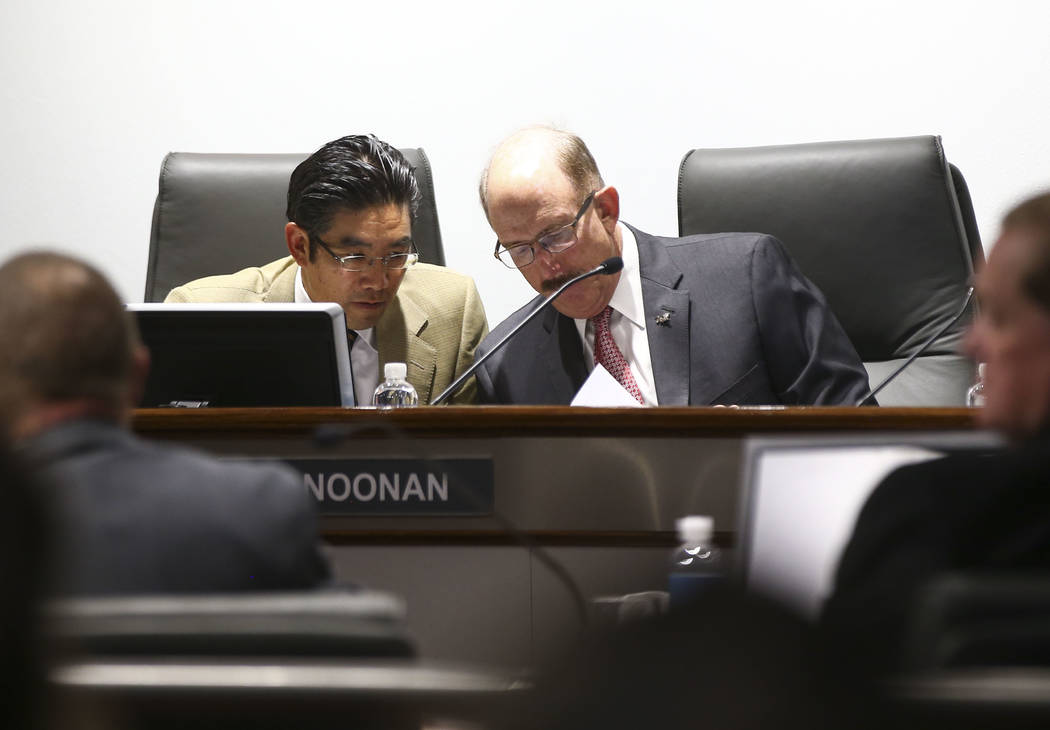 Longtime tourism boss Rossi Ralenkotter used $17,152 in airline gift cards given to the Las Vegas Convention and Visitors Authority for personal travel for himself and his family, an audit showed Wednesday

The benefits were detailed in a report ordered by audit committee chairman Bill Noonan in February, more than a year after the Las Vegas Review-Journal requested employee gift and travel records from the publicly funded agency. The convention authority did not provide the records.

Auditors also found that board chairman Lawrence Weekly used $699 in airline gift cards for a trip with his daughter.

The agency did not track the use of the gift cards, which were provided by Southwest Airlines from 2012 to 2017.

“Your personal use of those rewards was highly inappropriate and we would have expected you to use better judgment,” Noonan told Ralenkotter at an audit committee meeting on Wednesday.

Ralenkotter, the publicly funded agency’s CEO, apologized at the meeting for his actions and accepted “full responsibility.” He has already paid back the money to the convention authority and prohibited employees from using the cards for personal trips.

“I should have shown better judgment, and for that I am sorry,” Ralenkotter told the committee. “I hope you know me well enough now to know my love for this authority, this industry and this city and to know that I would never intentionally do anything to tarnish or embarrass this great organization.”

Weekly, a member of the audit committee, also took responsibility for his actions. He did not disclose the travel cards in his campaign finance reports. State law requires elected officials to report gifts worth more than $200.

In July 2016, Weekly said, he asked Brig Lawson, the agency’s director of business partnerships, for help in finding cheaper airline tickets for a trip to Texas on authority business. Weekly said he also took his daughter on the trip to visit her college.

Lawson took care of the matter, and Weekly said he later learned that Lawson used gift cards toward the purchase of the tickets.

Weekly said he should have followed up with Lawson about paying for the tickets but never did.

“This is no one else’s fault but mine,” Weekly said. “I dropped the ball.”

Weekly returned a call Thursday and said he didn’t put the $699 ticket for his daughter on his financial disclosures because he didn’t consider it a gift and planned to reimburse it. He said he got busy and forgot to pay back the money. He only reimbursed the ticket Tuesday.

Lawson, who was not available for comment, is the convention authority executive who received the gift cards from Southwest Airlines and distributed them within the agency.

There were no rules prohibiting the use of the cards for personal travel, the report said.

The authority’s in-house travel agency kept the only record of the cards when staff used them to book flights. The audit, which is ongoing, did not address how many cards could have been misused or how many employees had access to them.

“Unfortunately, the lack of appropriate internal controls over the years led to a mistaken practice that these cards were available for non-LVCVA business use,” Las Vegas attorney Todd Bice said in the report.

Bice, who is leading the inquiry, said the convention authority discovered the unfettered use of the cards in February 2017 and only then started tracking them.

Still, Bice recommended several ways to monitor the cards, including storing them under lock and key and requiring written approval of any gift card requests and recording receipts. The authority’s 14-member board will discuss the misuse of the cards next month.

Southwest Airlines spokesman Dan Landson declined to comment, but issued a statement saying: “Southwest Airlines provided gift cards to the Las Vegas Convention and Visitors Authority as part of various marketing programs over the last several years to support the airline’s growth in Southern Nevada. We do not comment on who uses gift cards or the purpose of their individual trips.”

The Review-Journal filed a records request in December 2016 asking for “any gifts, grants, gratuities or other consideration provided to employees” worth more than $300.

Convention Authority spokesman Jeremy Handel justified the lack of disclosure by saying the problem was not discovered until February 2017.

“Central administration provided all available documents in response to (the Review-Journal request) and the item was closed in January 2017,” he said.

But Handel wrote in a Jan. 20, 2017, response to the request that the authority “may provide more after further research.”

Barry Smith, executive director of the Nevada Press Association, said the authority should have released the records in response to the request.

“The Review-Journal tried to uncover this type of information because there were issues with LVCVA spending,” he said. “Transparency and accountability is the whole idea behind the records statute.”

While state law says it is a felony to conceal public records, Smith said he does not know of any cases that were prosecuted for that reason.

The new disclosures follow a Review-Journal investigation that questioned the agency’s spending and cozy relationship with board members.

An April 2017 Review-Journal story, based on more than 32,000 pages of receipts from convention authority executives over three fiscal years, showed lavish expenses on high-end entertainment, gifts for employees and first-class trips overseas for board members.

The Review-Journal also found that convention security officers were providing rides to Ralenkotter and former Las Vegas Mayor Oscar Goodman, who was paid $72,000 a year to serve as the agency’s tourism ambassador. The ongoing investigation showed lax controls over iPads, speakers and other gifts at the authority’s warehouse.

The agency has an operating budget of about $251 million, funded mostly by hotel room taxes, and uses it to promote tourism and operate the Las Vegas Convention Center.

But board members eventually changed the travel policy for themselves.