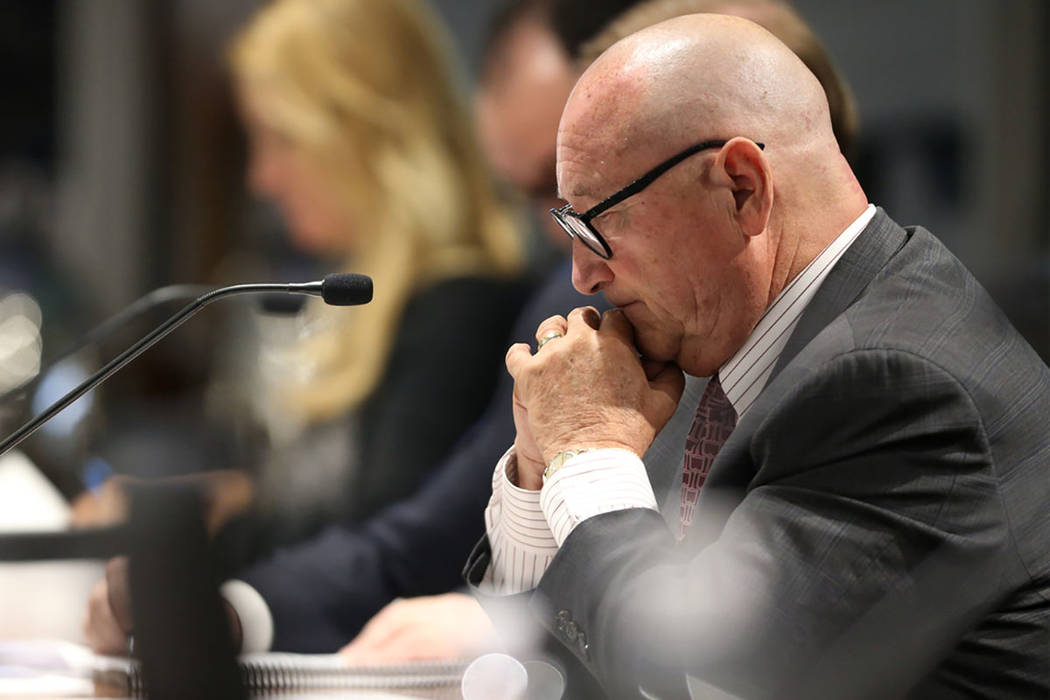 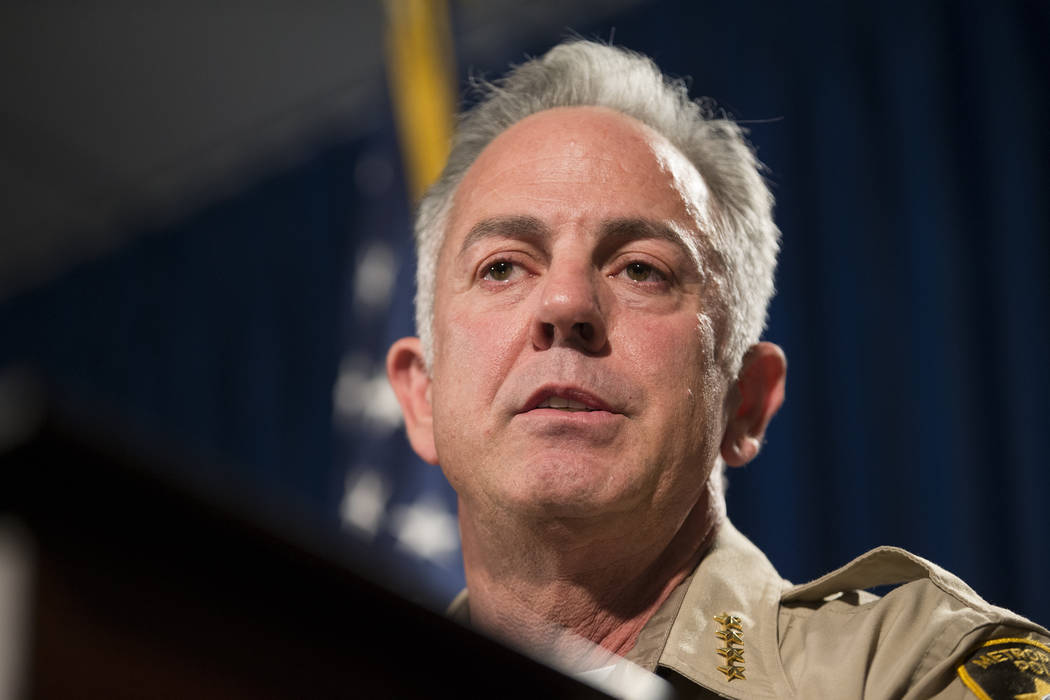 Rossi Ralenkotter, the former CEO of the Las Vegas Convention and Visitors Authority, pushed for $10 million in tourism funds for a police substation expansion while police were investigating the agency, records show.

Ralenkotter arranged a meeting with Sheriff Joe Lombardo to discuss the project after Ralenkotter became a target in the criminal investigation, which focused on the LVCVA’s misuse of agency-purchased Southwest Airlines gift cards, emails obtained by the Review-Journal show.

An audit that triggered the police investigation found that Ralenkotter as CEO used $17,000 in Southwest Airlines gift cards on personal travel.

The Oct. 2 meeting raises concerns about potential conflicts of interest for Lombardo as police continue to pursue $50,000 in gift cards missing from the tax-funded LVCVA and possible charges against any of the targets.

Among the other meeting attendees at Metro’s headquarters was Ralenkotter’s successor, Steve Hill. Ralenkotter retired Aug. 31 under the weight of the gift card scandal but remains deeply involved with the agency as a consultant.

The substation project, which sits on Las Vegas Convention Center property, has not yet been presented to the LVCVA board, which is composed of local elected officials and business leaders.

“I think that there’s definitely a perception of impropriety when a potential target of an investigation is in meetings designed to offer funding to the investigative agency,” said Eve Hanan, a UNLV law school professor who specializes in criminal law.

Hanan said she was not familiar with the details of the Oct. 2 meeting.

“My larger concern is that Metro have in place some system for addressing a potential conflict like this,” she added. “They are our law enforcement agency and the public has to be assured that the law enforcement agency will investigate crime without concern for whether they can gain or lose funding for projects.”

Defense lawyer Thomas Pitaro said putting both Lombardo and Ralenkotter in a room to negotiate an agreement amid the ongoing investigation invites “criticism and suspicion” of the project.

Ralenkotter said in an interview that he did not consider the ethical ramifications of meeting with the sheriff during the police investigation.

“It never entered my mind,” he said. “I was trying to finalize the project so it could move forward.”

Ralenkotter said he wanted to bring people together to get a consensus on the architectural design of the substation plans so he could seek board approval and construction funds for the project. Police had spent $17,000 on a consulting team to draw up the plans, records show.

Ralenkotter, who receives $15,000 a month to consult with the LVCVA on top of his nearly $300,000 annual public pension, said he did nothing wrong in his handling of the Southwest Airlines gift cards. He repaid the convention authority for his personal trips and he publicly apologized, he said.

Hill, who took the reins of the LVCVA on Sept. 1, declined an interview. But in a statement, he said Ralenkotter attended the meeting with Lombardo because of his “historical knowledge” of the project.

“Since taking over as CEO in 2018, I have had the opportunity to evaluate the project and I am confident that it is an essential investment for the continued safety of our visitors and residents alike,” Hill said.

Clark County Commissioner Larry Brown, who chairs the LVCVA board, said he is not bothered by the presence of Lombardo and Ralenkotter at the meeting.

“I have no problems if the meeting was strictly to talk about the substation expansion,” said Brown, who also is a member of the Metro Fiscal Affairs Committee, which oversees the police budget. “If the sheriff felt that there was a potential conflict, I think he would have chosen not to participate.”

Brown said he believes that Ralenkotter’s interest in the project long predated the meeting with Lombardo. That interest began as early as 2016, when the Nevada Legislature authorized a Clark County hotel room tax increase to pay for the $1.4 billion expansion of the convention center. The Legislature also authorized a Clark County sales tax increase to fund the hiring of additional police officers.

Ralenkotter said he recalls talking to Lombardo about accommodating the need for more officers at the substation after the legislation was approved. He said he was in the habit of updating the sheriff on the progress of the expansion project when he ran into him at public events.

This would not be the first time the LVCVA has used tourism funds for police. The agency built the substation in 2008 for $17 million and then leased it to police to help protect the resort corridor along the Strip. In July 2017, Ralenkotter persuaded the board to fund a counterterrorism analyst position for police for another five years. The board approved $781,000 for the extension.

Under Ralenkotter’s leadership, the LVCVA often provided tax dollars and resources meant for tourism to other public agencies. It gave land for the construction of a Clark County fire station at the convention center, partially bankrolled a presidential debate at UNLV and funded projects for McCarran International Airport and the Regional Transportation Commission.

The agency has a $251 million annual operating budget, mostly from hotel room taxes.

Police and LVCVA executives started talking about the substation in February 2017, police and authority emails show. At about the same time, LVCVA financial officers discovered discrepancies in accounting for the Southwest Airlines gift cards.

Charles Hank, then a Metro deputy chief, sent an email to Assistant Sheriff Tim Kelly about a conversation he had regarding the substation proposal with Ray Suppe, the LVCVA security chief. Hank said Suppe “floated the idea” with Ralenkotter, who was “open” to it but wanted more information.

Hank, now an assistant sheriff, said Suppe suggested it would be a good time for Lombardo to call Ralenkotter and let him know that police wanted his assistance with the project.

LVCVA emails show that Ralenkotter was directly involved in high-level discussions with police months later, after LVCVA executives learned about the criminal investigation on June 28. The emails do not show whether he participated in discussions before the investigation.

On the morning of June 28, detectives with the criminal intelligence section visited the convention authority’s executive offices seeking audit records that documented the mishandling of the Southwest Airlines gift cards.

Knowledgeable sources said detectives made it clear to LVCVA legal counsel Luke Puschnig and Chief Financial Officer Ed Finger on June 28 that Ralenkotter was one of their targets. Another target was Brig Lawson, the senior director of business partnerships who bought the airline gift cards for the agency. Lawson, who was forced to resign, could not be reached for comment.

In the meantime, Terry Miller, the head of the company overseeing the convention center expansion, had updated Ralenkotter on the substation project.

Miller told Ralenkotter in a June 5 email that he negotiated a drop in the construction price from $13 million to $10 million. He said the plan was to seek the board’s approval by the end of this month and begin construction toward the end of 2019.

“At this time, we will await your direction regarding the next steps,” Miller wrote Ralenkotter.

Miller did not respond to a request for comment.

On July 2, four days after police first showed up at the authority’s offices, Ralenkotter obtained the office and cellphone numbers of both Lombardo and attorney Terry Coffing, whose firm represents the Police Department in civil cases, emails show. Then, on July 9, the day the Review-Journal ran a story publicly disclosing the police investigation, Ralenkotter got the phone number of former Sheriff Bill Young, who is Lombardo’s close friend and mentor.

Coffing, who ended up representing Ralenkotter in the investigation, declined to comment. Young did not respond to a request for an interview.

Ralenkotter said he learned about the police visit on June 29, but he did not recall why he wanted the phone numbers of the three men.

At the end of July, emails show, Ralenkotter sought a formal meeting with Lombardo to discuss the substation project. By then, Ralenkotter had enlisted the help of Coffing to negotiate his retirement agreement and consulting contract with the LVCVA board. Ralenkotter wanted to meet with Lombardo on Aug. 15, two weeks before he planned to step down, but the meeting did not occur until Oct. 2.

However, days before the board approved a $455,000 retirement deal for Ralenkotter on Aug. 14, Las Vegas police Deputy Chief Shawn Andersen, who oversees the department’s intelligence unit, did something unusual. He gave then-board Chairman Lawrence Weekly a letter that said police had not found evidence of wrongdoing by Ralenkotter “at this time.”

The investigation had been active for six weeks, but police had done little work other than to review the results of the board-ordered audit.

Defense lawyer Craig Drummond said he found it odd that police publicly talked about a case that had not been closed or submitted to the district attorney’s office for prosecution.

“Why did Metro feel the need to do that in this situation?” Drummond asked. “Normally, they tell me it’s an active case and we’re not going to comment on it.”

The day after the Oct. 2 meeting, Terry Miller sent an email to Luke Puschnig informing him that the discussions focused on the budget and construction schedule for the substation remodeling project.

Miller said Hill gave him the “go ahead” to move forward with taking the proposal to the LVCVA board.

As of January, Ralenkotter, working as a consultant, was still pushing for the expansion of the substation.

Suppe, the LVCVA security chief, informed Miller in a Jan. 4 email that both Ralenkotter and a top police official called him that day asking for an update on the expansion plans.

Ralenkotter wanted to know what month the board would hear the proposal.