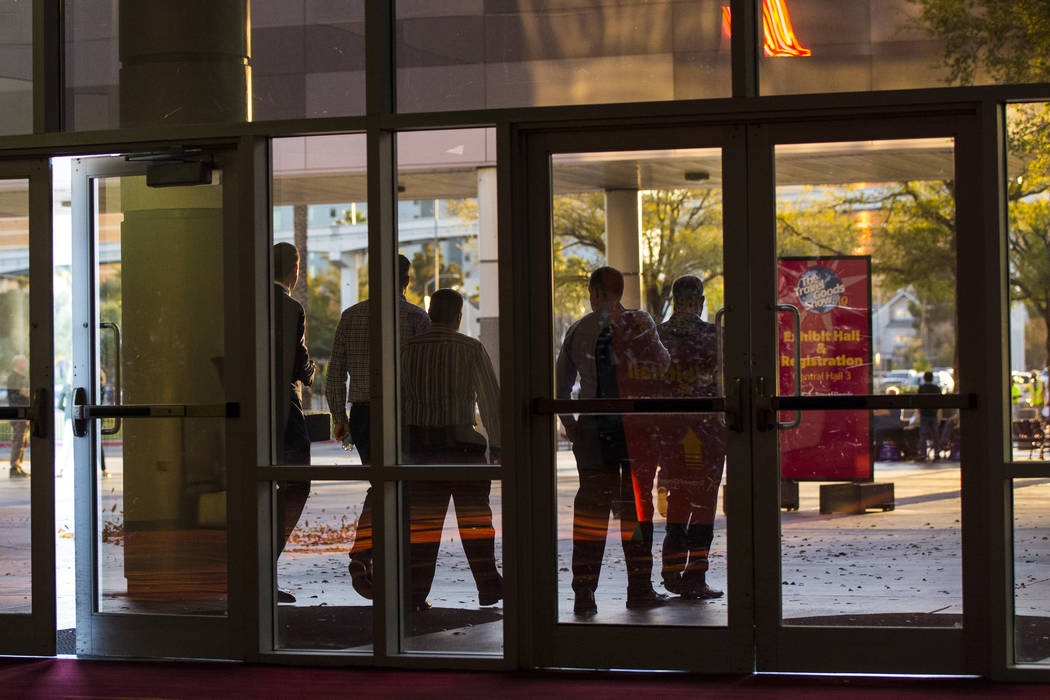 Intelligence detectives with the Metropolitan Police Department walk out of the Las Vegas Convention Center after executing a search warrant in a criminal investigation into the misuse of airline gift cards on Wednesday, March 27, 2019. (Chase Stevens/Las Vegas Review-Journal) @csstevensphoto

The Review-Journal filed court papers Monday seeking to unseal documents supporting a warrant to search the offices of the Las Vegas Convention and Visitors Authority in a criminal investigation of the tourism agency.

“The public has a compelling interest in learning as much as possible about the government’s investigation in the alleged misuse of public funds by the LVCVA and its executives,” attorney Maggie McLetchie said in the court papers.

“Given that the warrant has been executed and reported on by the Review-Journal and other media entities, there is no longer any basis for sealing the supporting warrant materials.”

Las Vegas police executed the search warrant on March 27, looking for evidence that convention authority executives mishandled $90,000 in Southwest Airlines gift cards bought by the tax-funded agency between 2012 and 2017.

That same day police arrested former LVCVA executive Brig Lawson, alleging he was at the center of a conspiracy to steal the Southwest gift cards. Police have not yet filed formal charges against Lawson, who is out of custody. His new defense lawyer, Chris Oram, said Monday that Lawson did not commit wrongdoing.

Longtime CEO Rossi Ralenkotter, who retired in August under the weight of the investigation, used $17,000 in gift cards on personal travel. Before he stepped down last August with a $455,000 financial package, Ralenkotter reimbursed the LVCVA for the gift cards and apologized for his conduct. But he denied criminal wrongdoing and remains involved with the authority, earning $15,000 a month as a consultant.

Both the search warrant and an 11-page police report describing the investigation have been unsealed. The investigation is being conducted by the Metropolitan Police Department’s Criminal Intelligence Section, which handles sensitive public corruption cases.

Seven years’ worth of records

In papers filed in Las Vegas Justice Court on Monday, McLetchie sought to unseal a police affidavit that provided probable cause for the search along with exhibits that list the names of people who used the gift cards.

McLetchie said police would have trouble demonstrating the investigation into the LVCVA would be harmed if those documents were made public. The targets and details about the nature of the investigation already have been disclosed.

“Thus, there is no good cause to justify the continued sealing of the warrant materials,” she wrote.

Police acknowledged in court records that their investigation was prompted by the Review-Journal’s reporting of the Southwest Airlines gift card scandal, McLetchie said.

The newspaper revealed the results of an LVCVA board-ordered audit that found the agency did not properly track the cards. Auditors could not account for more than $50,000 worth of gift cards, but with the help of airline records, police later determined what happened to the majority of the cards.

At a board meeting in April, Steve Hill, who succeeded Ralenkotter as CEO, revealed that during the search police had given the agency key information about the investigation, including who used the gift cards and which flights were involved.

But both the LVCVA and police have refused to make public copies of any warrant documents in their possession.

“It is imperative that our judicial system be conducted in a transparent manner,” said Ben Lipman, vice president of legal affairs and general counsel for the Review-Journal. “We are hopeful the court will recognize the public’s rights under Nevada law and the First Amendment to see these documents and will quickly unseal them.”

Lawson, who resigned a year ago as the authority’s former executive director of business partnerships, concealed the gift card purchases in agency financial records promoting the airline and distributed them “as he saw fit for his own financial and personal gain,” the police report alleged.

Among those who wound up with Southwest cards was Cathy Tull, the agency’s former chief marketing officer.

Tull, one of Lawson’s supervisors, used $6,000 in gift cards on personal travel, primarily for her son and former husband, the report alleged. She resigned days after it became public that she had bought airline tickets with the cards.

Her lawyer, Mike Pavlakis, did not respond to a request for comment on Monday.

Lawson’s longtime life partner, entertainment booking agent Phil Reynolds, also bought Southwest Airlines tickets with more than $9,200 in gift cards. The LVCVA terminated a contract with Reynolds in 2016 after it learned he was in a “dating relationship” with Lawson, according to the police report.