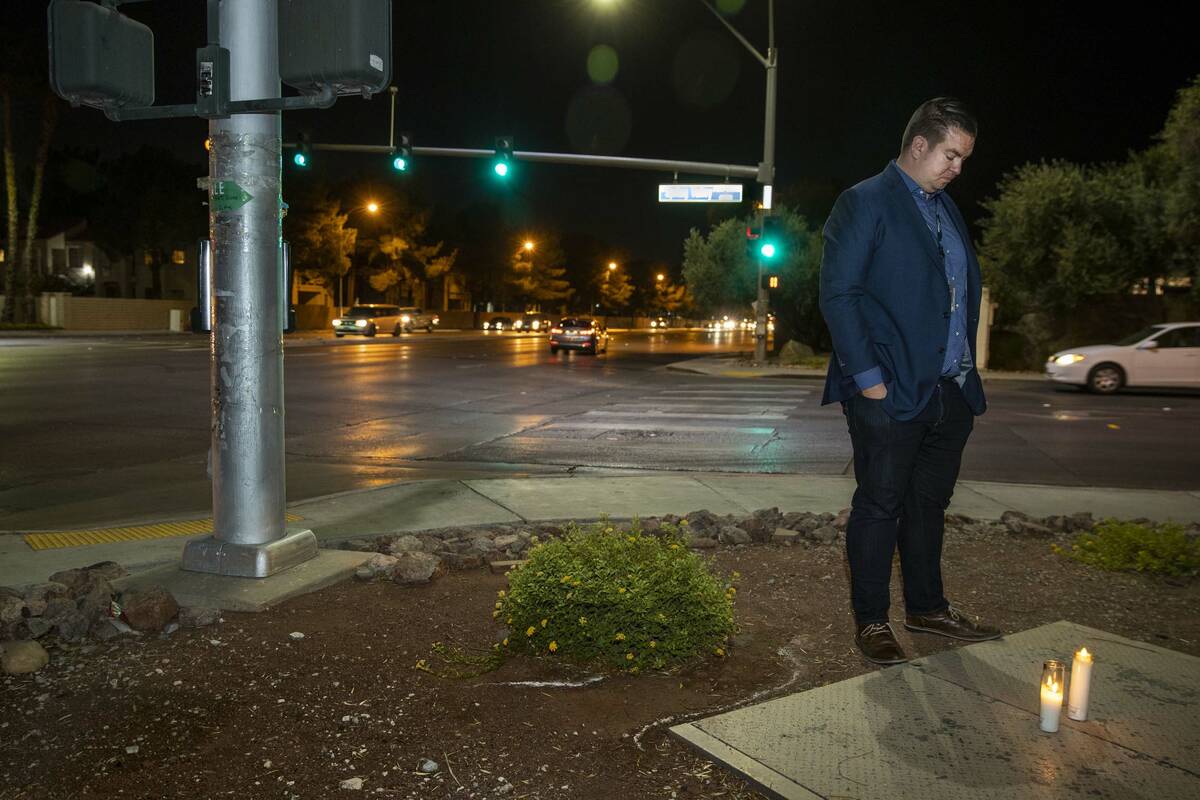 Andrew Bennett, public information officer with Zero Fatalities, stands after leaving a lighted candle near where a Corvette driven by Raiders wide receiver Henry Ruggs collided with the rear of a RAV4 leading to a fatal accident at South Rainbow Boulevard and Spring Valley Parkway on Tuesday, Nov. 2, 2021, in Las Vegas. (L.E. Baskow/Las Vegas Review-Journal) @Left_Eye_Images 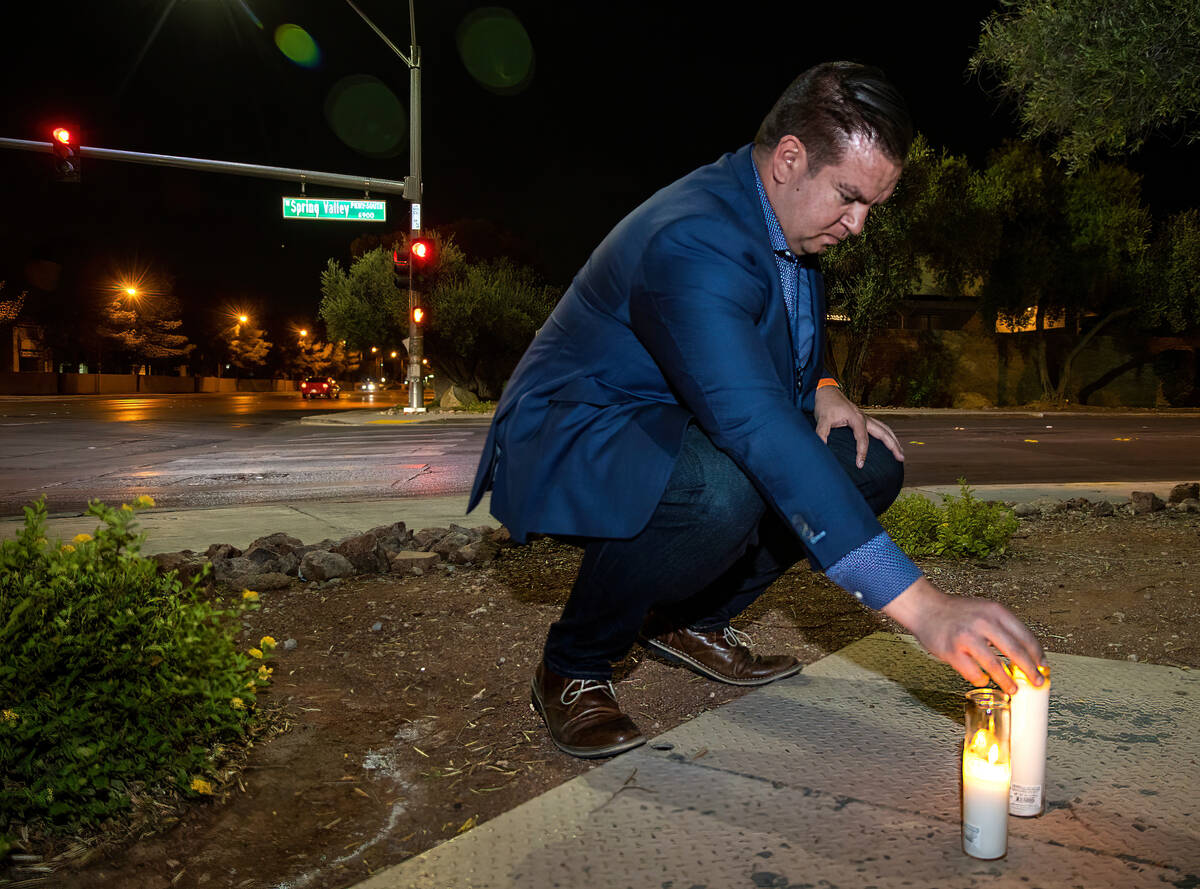 Andrew Bennett, program director for the state's Zero Fatalities, leaves a lighted candle near where a Corvette driven by former Raiders wide receiver Henry Ruggs collided with the rear of another driver's car, leading to a fatal accident on Nov. 2, 2021, in Las Vegas. (L.E. Baskow/Las Vegas Review-Journal) @Left_Eye_Images

Not long after sunset Tuesday, Andrew Bennett lit a large white candle near the intersection of Rainbow Boulevard and Spring Valley Parkway.

Hours earlier, a Corvette traveled at 156 mph on Rainbow, moments before it struck a compact SUV, killing its driver and her dog. The sports car’s driver, then-Raiders wide receiver Henry Ruggs, now faces charges of DUI resulting in death and reckless driving, according to court records.

Bennett said his candle was a small symbol to remember Tina Tintor, who died at age 23. He had lit 318 others to honor people killed by car crashes across Nevada so far this year, more than 170 of which have been in Clark County.

“We’re on track to have the worst year in a decade on fatalities on Nevada’s roadways this year,” said Bennett, program director for Zero Fatalities, the state’s official traffic safety program. “We’re about a week away from surpassing our worst year.”

The number of fatalities dipped to 304 in 2019, but they increased to 318 in 2020 even as many people were quarantined and worked from home due to the COVID-19 pandemic.

The Review-Journal reported in August that the first seven months on Nevada roads this year proved to be the deadliest in a decade.

Excessive speed has been a factor in about one-third of all fatal crashes in the state in recent years, Bennett said.

Some 4,400 speeding tickets were given in Nevada to motorists going 100 mph or more last year, an increase of about 26 percent from 2019, state statistics show.

More than 2,500 were given in Clark County in 2020, according to the Nevada Department of Transportation.

Related: Video shows Ruggs speeding in car with girlfriend, who says: ‘Slow down’

Bennett said Nevadans began driving more dangerously when streets were relatively empty due to the pandemic. Those behaviors have continued even as roadways have become busier.

Cases like Ruggs are extreme, but not unheard of, Bennett said.

In July, a Lamborghini traveling 141 mph in a 45 mph zone struck and killed a moped rider on Russell Road in the southwest Las Vegas Valley.

The impact split the moped rider “in half,” Bennett said.

“These are extremely violent events, and when speeding is a major factor they’re even more violent,” he said. “We cannot afford to only talk about this when it is high profile.”

Bennett said he tries to visit every fatal crash site south of Tonopah to light a candle in honor of those killed.

When he can’t make it to a site, he lights extra candles at the next one he visits.

More than 40 percent of fatal crashes involve drivers impaired by alcohol, marijuana or another substance, according to a 5-year moving average from 2015 through 2019.

People injured in high-speed crashes are often admitted with broken bones, organ damage and friction burns, if they are ejected from their vehicle, said Dr. Deborah Kuhls, a trauma and critical care surgeon for the UNLV School of Medicine and University Medical Center.

Many need a ventilator to breathe by the time they reach the hospital and require immediate surgery.

“It’s a rare day that goes by that I don’t see one or more patients from a vehicle crash that sustained very significant injuries as a result of speeding,” Kuhls said.

Crash victims in accidents from cars traveling 75 mph are about 1½ times more likely to have a serious brain or spine injury, compared to those traveling between 55 and 75 mph, said Kuhls, who is also a researcher in UNLV’s traffic safety research group.

Officials are working to curb speeding on arterial roads in Las Vegas.

Tree-lined medians separate opposing directions of traffic that are each three lanes wide. The posted speed limit is 45 mph, and red brick walls separate cars from houses lining the street.

“It makes it even sadder to me because such care was taken to try to prevent a crash like this from happening by doing some ‘traffic calming’,” Breen said. 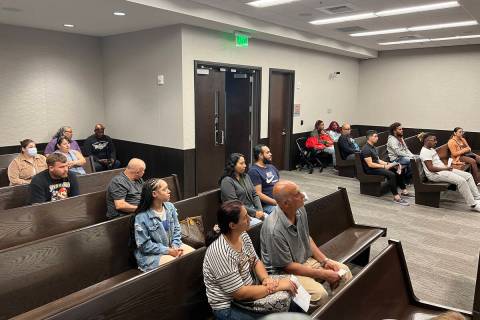