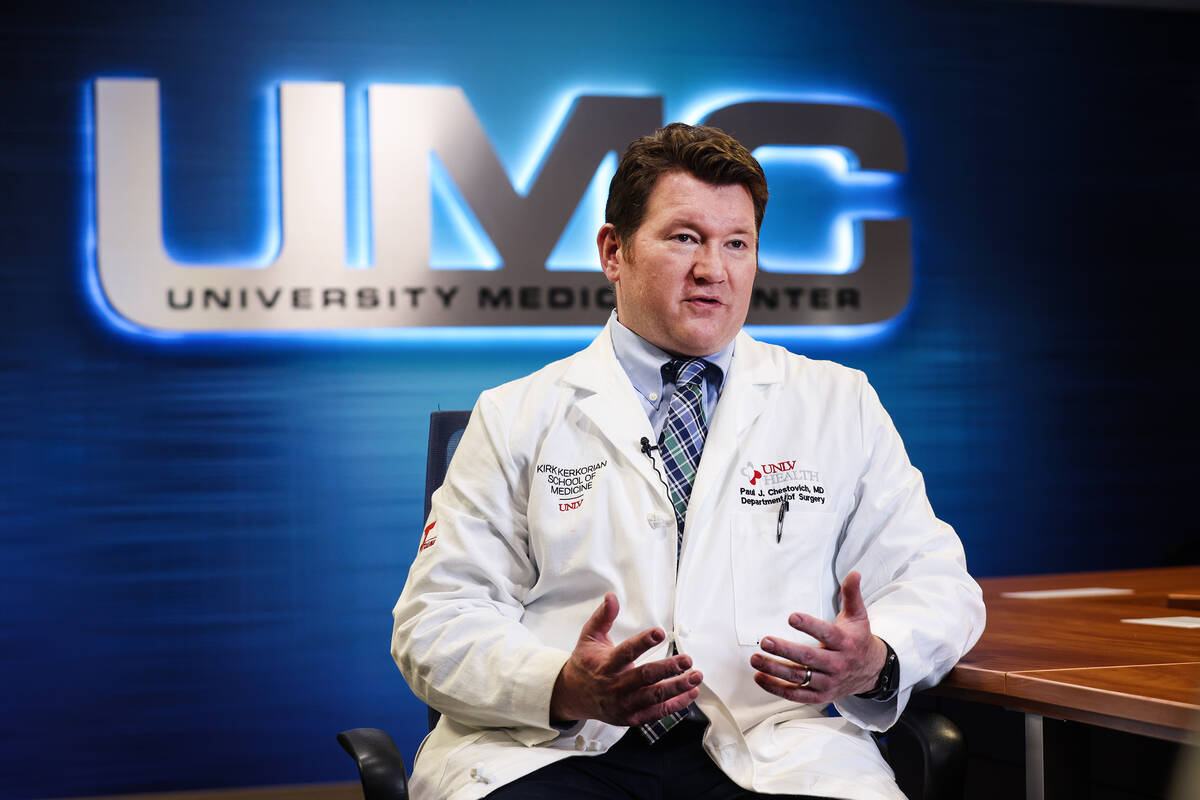 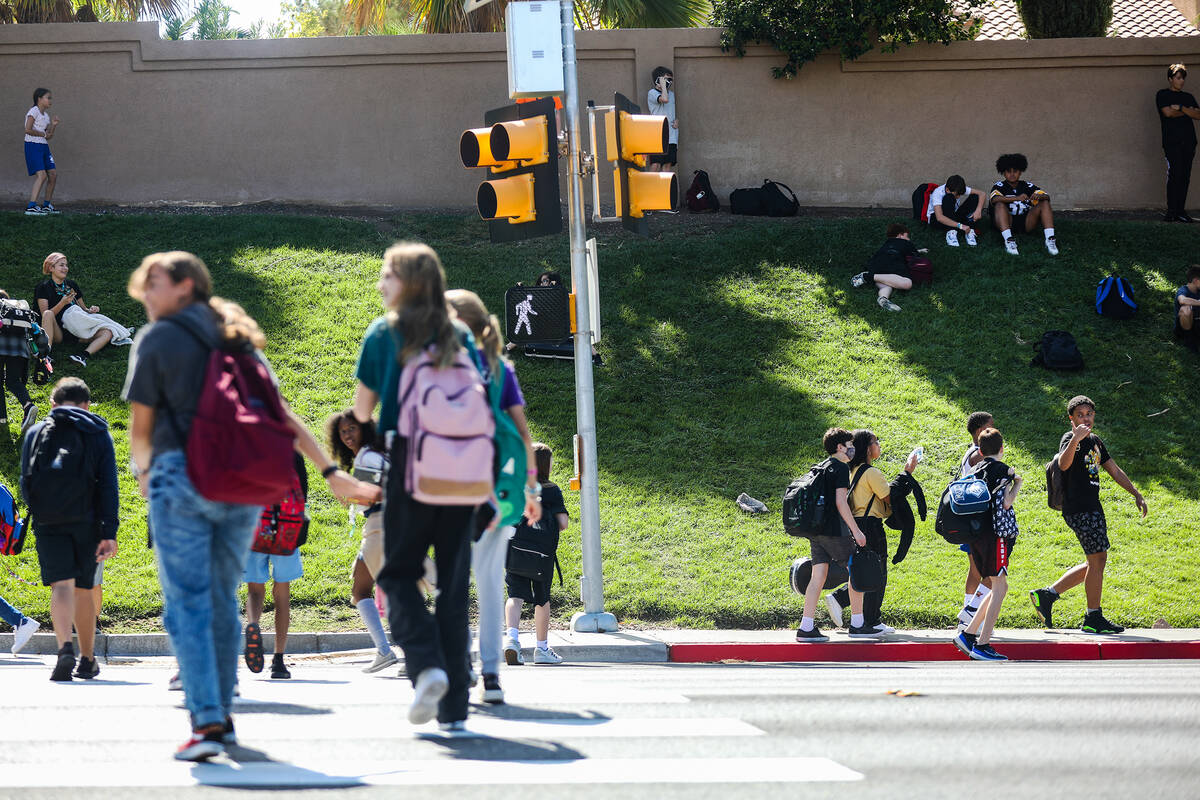 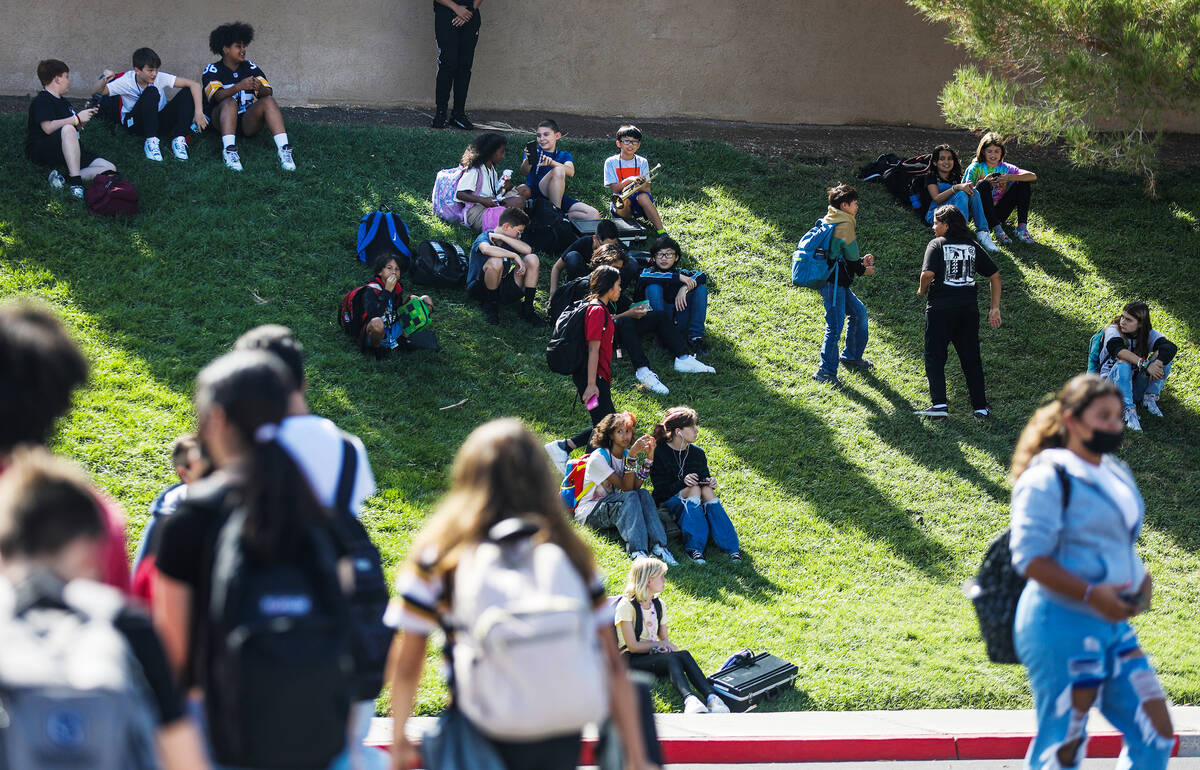 Students wait to be picked up and walk home outside Greenspun Junior High School in Henderson in September. (Rachel Aston/Las Vegas Review-Journal) @rookie__rae 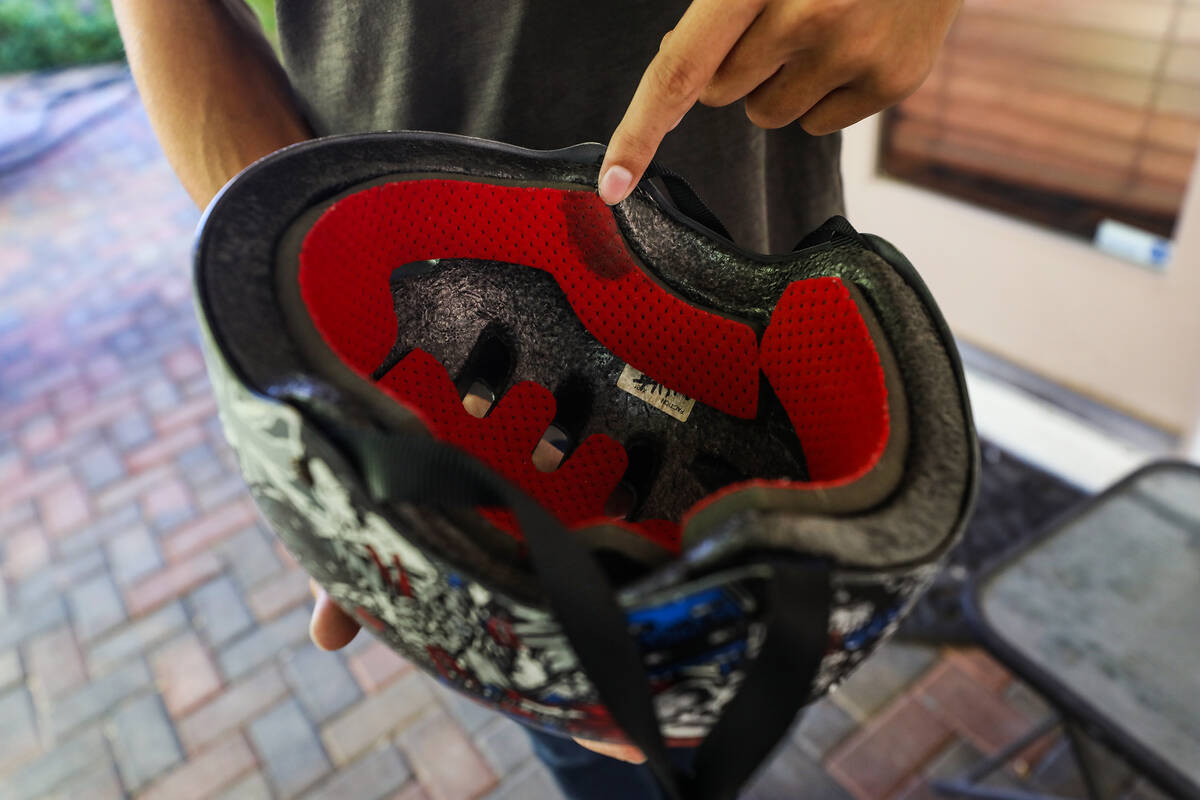 Alex Wigg shows blood on the helmet that he wore at age 11, when he was struck by a car while biking to school in Las Vegas. (Rachel Aston/Las Vegas Review-Journal) @rookie__rae 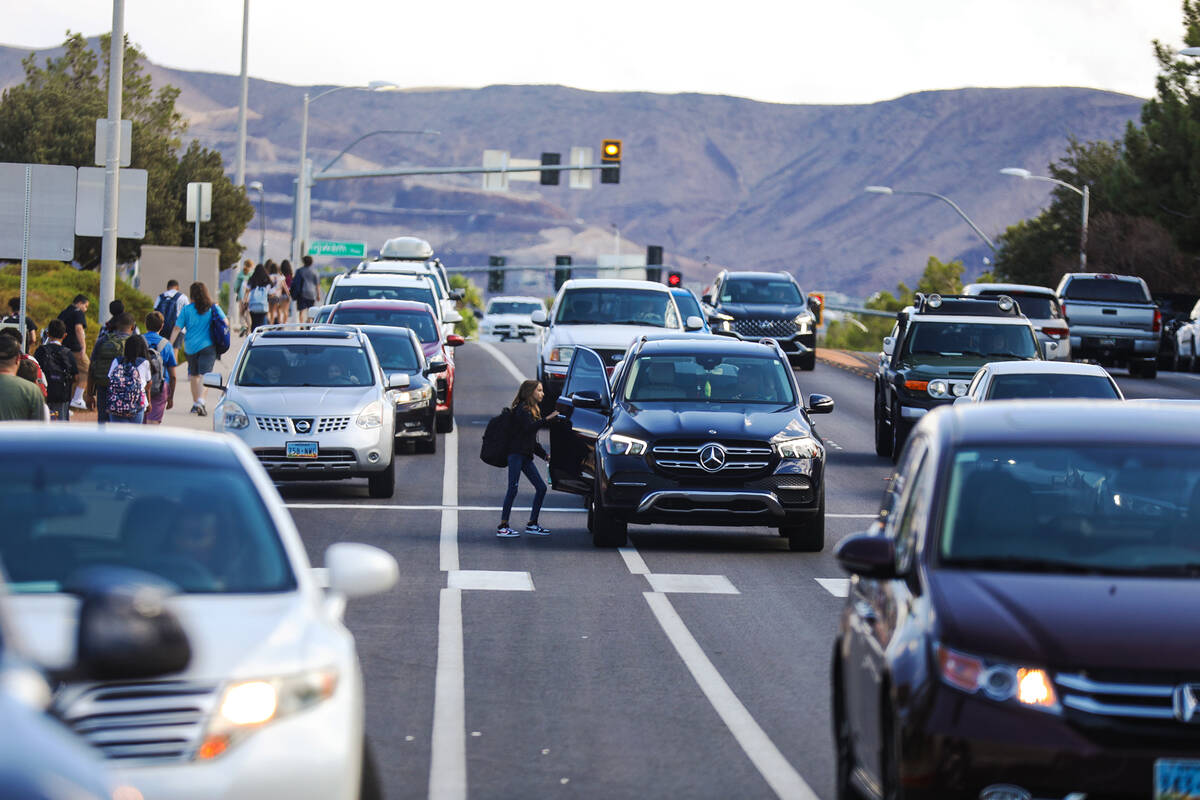 Hundreds of children have been hit by vehicles while biking or walking near Las Vegas Valley public schools, but educators and parents are unaware of the vast majority of crashes, records and interviews show, reducing the ability to target danger zones.

More than 340 school-age children were injured — over 30 seriously and four fatally — within a quarter-mile of Clark County School district campuses, during hours immediately before and after school, according to a Review-Journal analysis of state crash data from 2015 through 2019.

But school district records show only 19 students were injured during the same period.

That’s because CCSD gathers crash information from varying sources — from police to principals to families — a system that school officials acknowledge is unreliable. They also maintain the responsibility is not theirs to keep track of injuries and deaths.

“CCSD does not govern/manage streets and roadways, thus the district is not the repository of incidents that occur on roadways,” a spokesperson wrote in an email.

But the district does oversee the Safe Routes to School program, a countywide initiative tasked with identifying improvements and policies to protect students who walk and bike to campus.

At Greenspun Junior High School in Henderson, a parent said she was concerned that the district was not keeping tabs on crashes.

“I would lose my mind if the police didn’t report it so the school could protect our kids,” Jessica Flores said. “We as adults have an obligation to our kids to keep them safe, no matter what the cost is.”

No government agency is aggressively tracking the information, even as traffic fatalities involving pedestrians and bicyclists of all ages are up in Clark County. There have been 46 pedestrian deaths through August, a 15 percent jump compared to the same time period last year.

Reporting crashes near campuses to CCSD is at the discretion of valley officers, according to law enforcement officials.

Southern Nevada’s largest city and county police departments said they are not required by the state to determine whether children hit by vehicles are students, nor are they required to alert school district police when they do learn of crashes involving pupils.

Information that officers do pass along to CCSD police is not automatically shared with the district’s risk management department, which cultivates its own crash list from school administrators and parents.

CCSD provided a list of crashes to the Review-Journal that showed zero students were killed while walking or biking to school from 2015 through 2019.

But several were killed, including 17-year-old Daniel Benavides in September 2015, 11-year-old Jazmin Espana in February 2017 and 12-year-old Jonny Smith in March 2019. All three were walking home from CCSD schools, according to police records and media reports.

Daniel was struck crossing Commerce Street outside a crosswalk near Mojave High School; Jazmin, walking with a friend from Woodbury Middle School, was hit by a garbage truck in a crosswalk; and Jonny, walking with two boys, was hit outside of a crosswalk near Faiss Middle School. A fourth student, Niccoli Franklin, 9, was killed while riding his bike in March 2018 behind Silvestri Junior High School. An SUV struck him about a half hour after classes ended at nearby Cartwright Elementary, where Franklin was a student, records show.

The crash that fractured Alex Wigg’s skull also was not included.

In April 2017, a Mercedes-Benz sedan collided with Alex as the fifth grader’s mountain bike entered a city crosswalk not far from Givens Elementary School, where he was headed. The impact flung him through the air and onto the asphalt, a witness told police.

The then-11-year-old spent three days heavily sedated and on a ventilator as doctors at University Medical Center reduced the swelling in his brain. Now 17, Alex is a junior in high school with his own driver’s license, but he still lives with lingering effects from a traumatic brain injury.

His mom, Jena Antonchuk, said she was surprised her son’s name was not on the district’s list. She said Alex’s principal checked on him in the hospital, and CCSD later included him in a video promoting bike safety.

“Clearly the school is very aware of it,” she said. “Why would he not show up?”

This summer, Chestovich helped publish research showing UMC’s trauma center saw clear spikes in children hit by cars on school days. An average of 25 to 30 were treated each year from 2011 to 2019.

“First and foremost, these should be counted closely,” he said. “Just to make sure that some sort of investigation is done to find out why it happened, and if it can be prevented in the future.”

The most vulnerable were children ages 11 to 13. More than 150 were struck by cars near schools.

They accounted for about half of the injuries identified in the Review-Journal’s data analysis, despite junior high and middle school students making up about 25 percent of CCSD’s total enrollment.

Parents, school district officials and traffic safety experts blamed a mix of impatient drivers, impulsive students and distractions, like smartphones. They also noted that middle schools typically have more students than elementary schools, intensifying chaos during pickup and drop-off times, and that middle schoolers who bike or walk home are less likely to be accompanied by an adult.

At Greenspun Junior High School in mid-September, the afternoon dismissal bell rang out like a starter’s pistol.

Within minutes, hundreds of students had spilled out of the Henderson campus and toward a line of cars parked along either side of Valle Verde Drive.

The exodus was frenetic. Some children zipped down the four-lane street on bikes and scooters, while others loudly chased their friends down the sidewalk.

Cars merged in and out of traffic heading in either direction. Drivers made illegal U-turns and parked illegally next to red curbs. Some parents complained they’d seen vehicles speed through the marked school zone before.

Speed limits in Nevada school zones are posted at 15 to 25 mph.

“It’s an absolute madhouse,” said Flores, who arrived early to pick up her son.

Vehicles struck and injured at least four children walking or biking near Greenspun from 2015 through 2019. In the most recent crash, occurring at an intersection just north of the school, two teenage boys told police a Tesla struck the bicycle they were riding and then fled the scene, leaving their arms scraped and swollen, records show.

Greenspun parent Lynne Serrano said the school’s enrollment last year — 1,400 students — was more than triple her son’s elementary school. She arrives an hour early each afternoon so her sixth grader can get into her pickup truck without crossing the street.

CCSD police Lt. Bryan Zink said collisions inside and near crosswalks is the “No. 1” traffic safety problem facing students, “just because people are not paying attention.”

However, guards are only present at elementary schools, a decision made by city and county governments, not the school district.

The fifth-largest school district in the country, CCSD includes more than 300 campuses in the Las Vegas Valley.

Pleas to expand the services have grown louder this school year after a bus driver shortage forced changes in class start and end times across the district. As a result, some middle schools have lost the spillover benefit of being near campuses with crossing guards.

UNLV will host a meeting between city and county officials Thursday to discuss how crossing guards are allocated and whether their services can be expanded to middle schools, Breen said.

Staffing the more than 700 existing positions has proved difficult due to rising gasoline prices and the COVID-19 pandemic, according to Baron Farwell, general manager of The Crossing Guard Company.

“With the average age of our employees being close to 70 years old, our losses have been staggering,” he wrote in a letter to local officials this June.

Many vacancies were filled after the position’s hourly wage was raised from $15 to $15.50, but recruiting remains a year-round process, said regional manager Lisa Morrison.

Local government officials say they are working hard to protect students from getting hit.

Approximately 240 schools are part of the program, but less than half of those are actively participating. Grube, who took the program’s helm in 2021, said she’s reorganizing the program to improve that.

“At the end of the day we are working with our community and our administration and our families, making sure that we get the word out,” she said.

One of the federally funded program’s duties is to monitor arrivals and dismissals at schools to identify safety problems.

That was important for Antonchuk, the mother whose son, Alex, was hospitalized biking to school. She recalled the myriad of near misses and unchecked bad drivers she’s seen around schools over the years, those that police never had the chance to investigate.

“Numbers say only so much,” she said. “It doesn’t capture the entire experience of what’s going on on the streets with the kids.”

UNLV’s Breen said it was critical for officials across Southern Nevada to create a clearer picture about how often and where students are hit.

For now, even the school district’s limited data indicates students are more at risk.

During the 2021-2022 school year, CCSD reported 23 students were injured, more than it recorded the previous six years combined. An additional five crashes occurred this August.

“If people don’t know what the problem is then they aren’t tuned into it,” Breen said. “Working in a vacuum isn’t conducive to making the problem better.”

Davidson was a member of the Review-Journal’s investigative team. Staff writer Briana Erickson contributed to this report. Teghan Simonton was a summer intern for the Review-Journal. Have feedback? Send emails to rprast@reviewjournal.com.