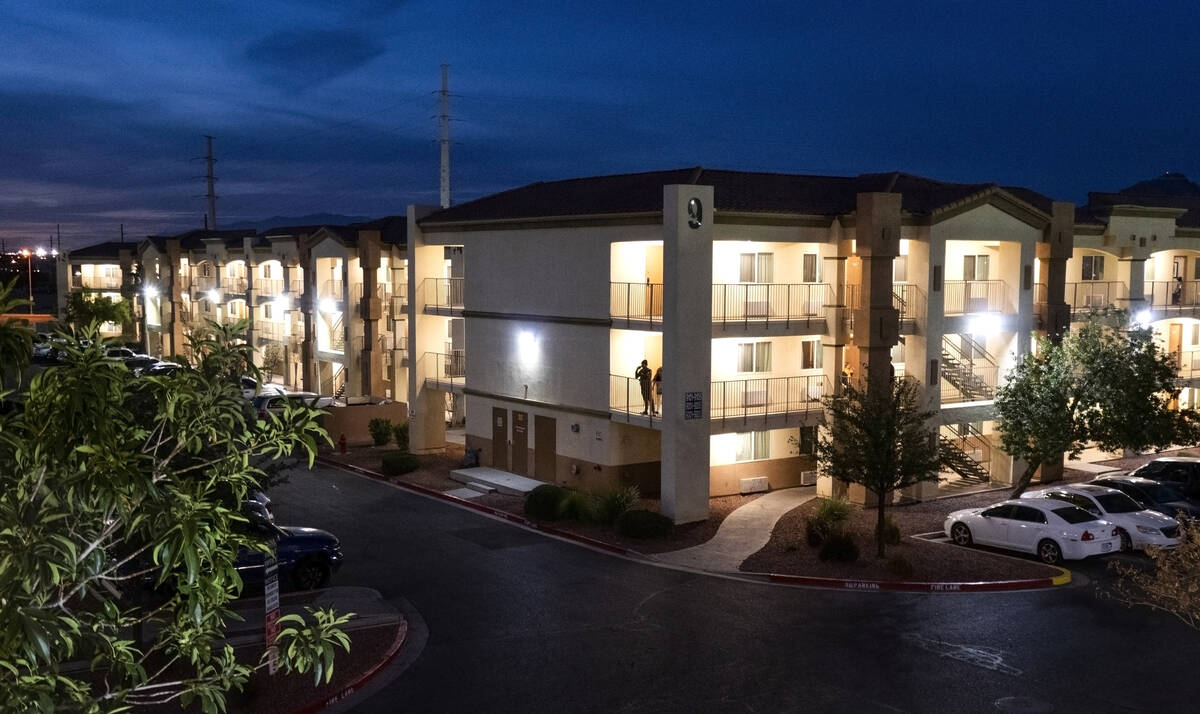 Residents hang out on a balcony at Siena Suites, where Metro service calls are high on Thursday, Oct. 21, 2021, in Las Vegas. (L.E. Baskow/Las Vegas Review-Journal) @Left_Eye_Images 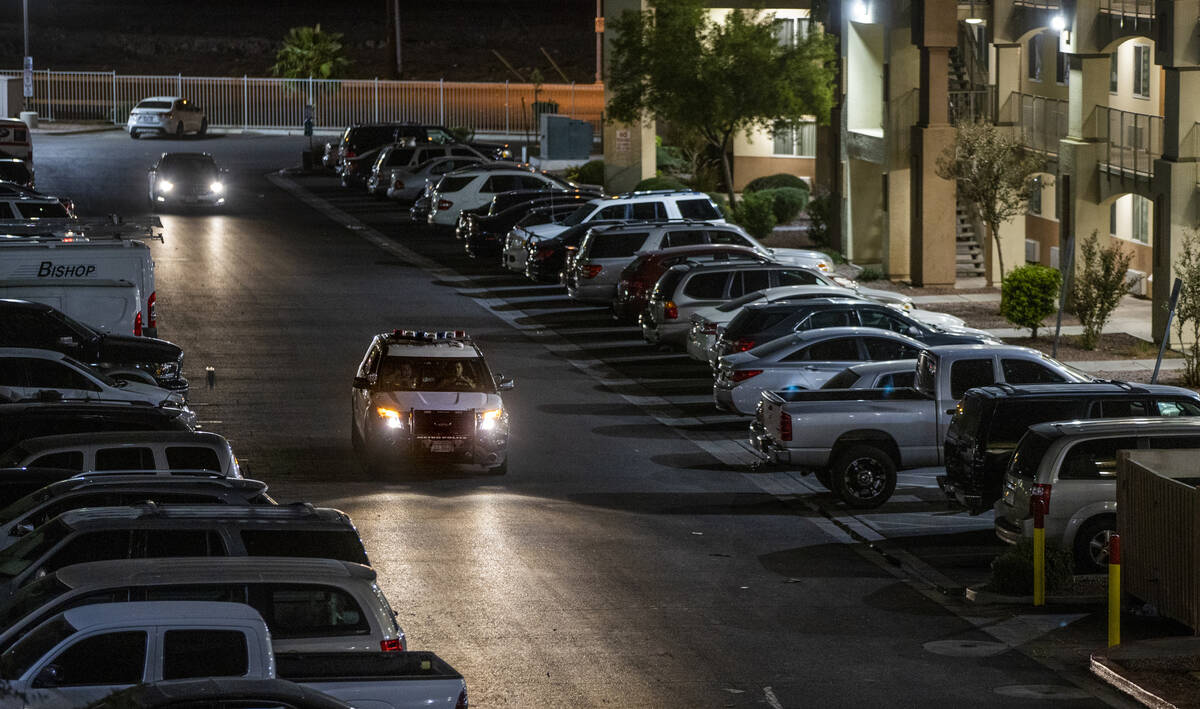 A Metro police vehicle cruises one of the parking lots at Siena Suites in October where Metro has logged thousands of calls since 2017. (L.E. Baskow/Las Vegas Review-Journal) @Left_Eye_Images 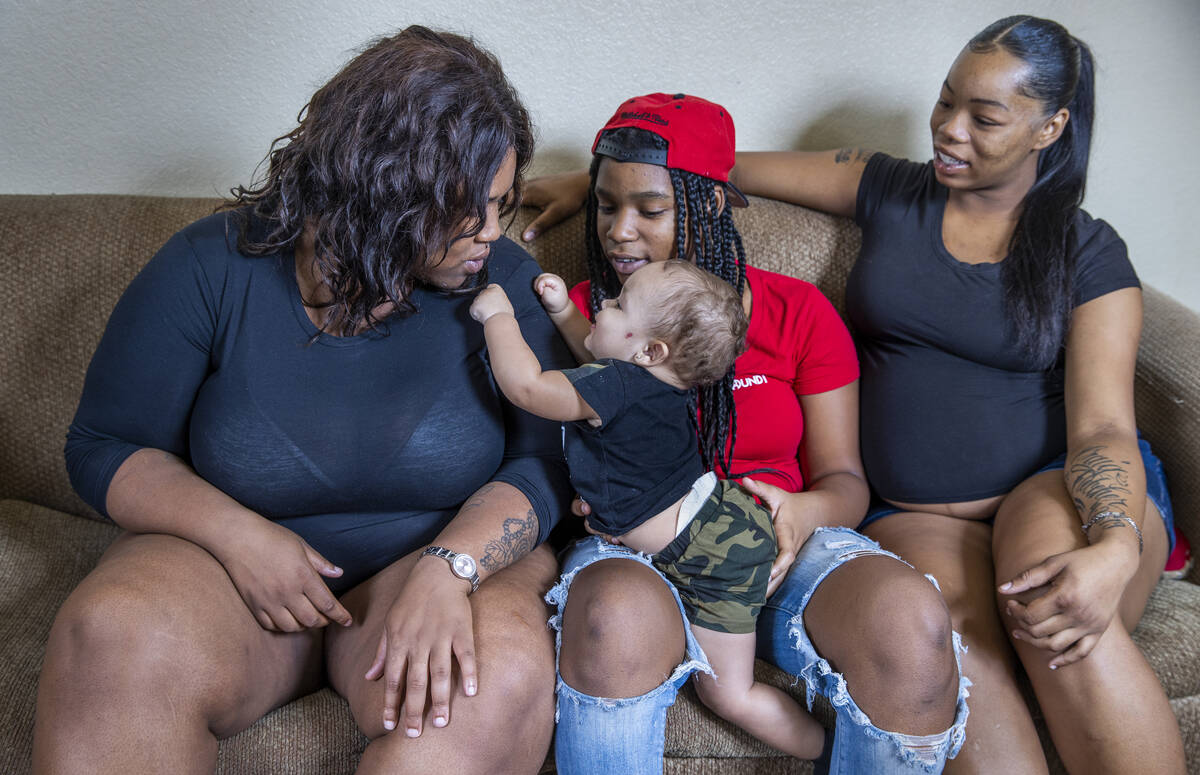 Imani Jones with her son Jay'zon Jones, 9 mos., with Kall'y Scott, 15, and Montrese Fletcher in their room at the Siena Suites where Metro service calls are high on Thursday, Oct. 21, 2021, in Las Vegas. (L.E. Baskow/Las Vegas Review-Journal) @Left_Eye_Images 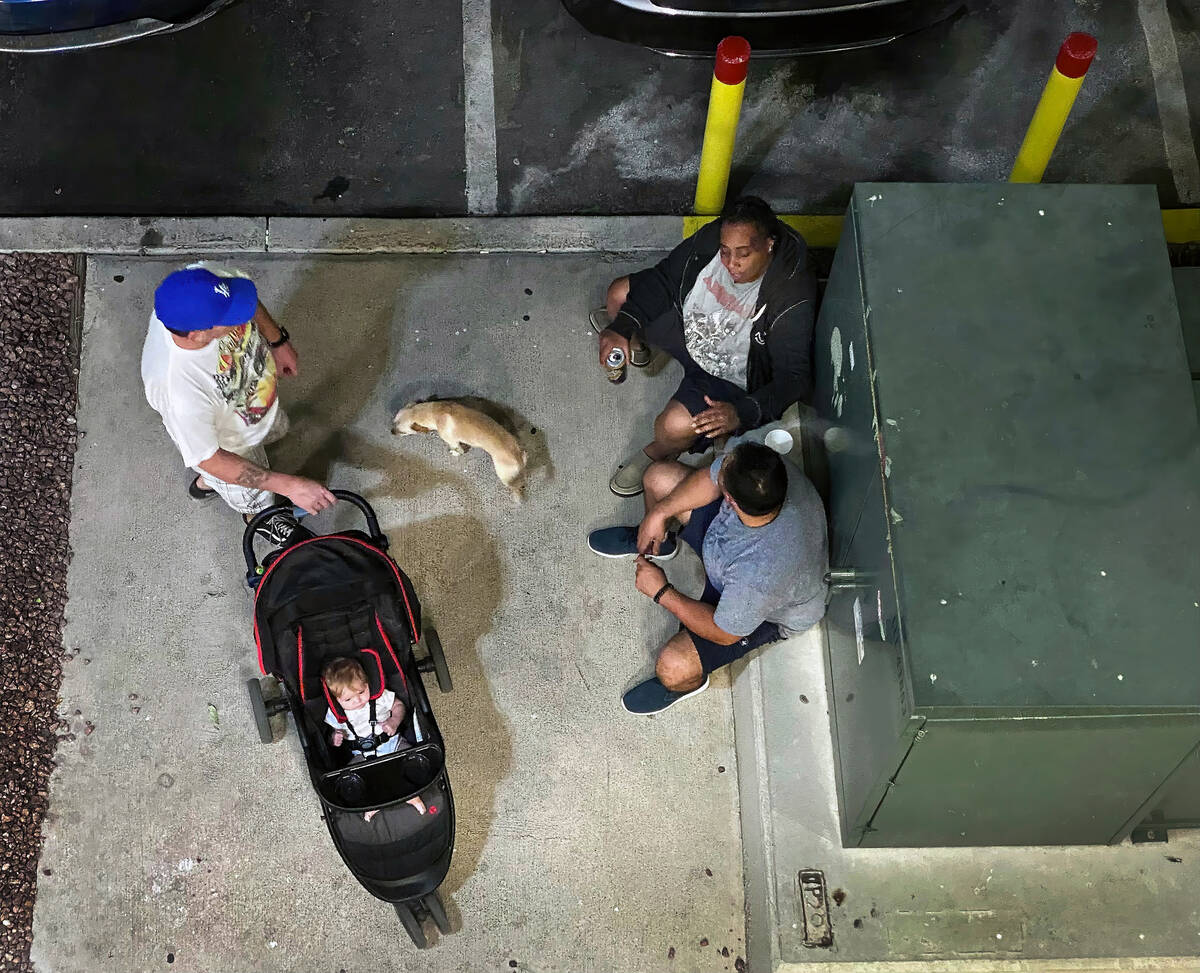 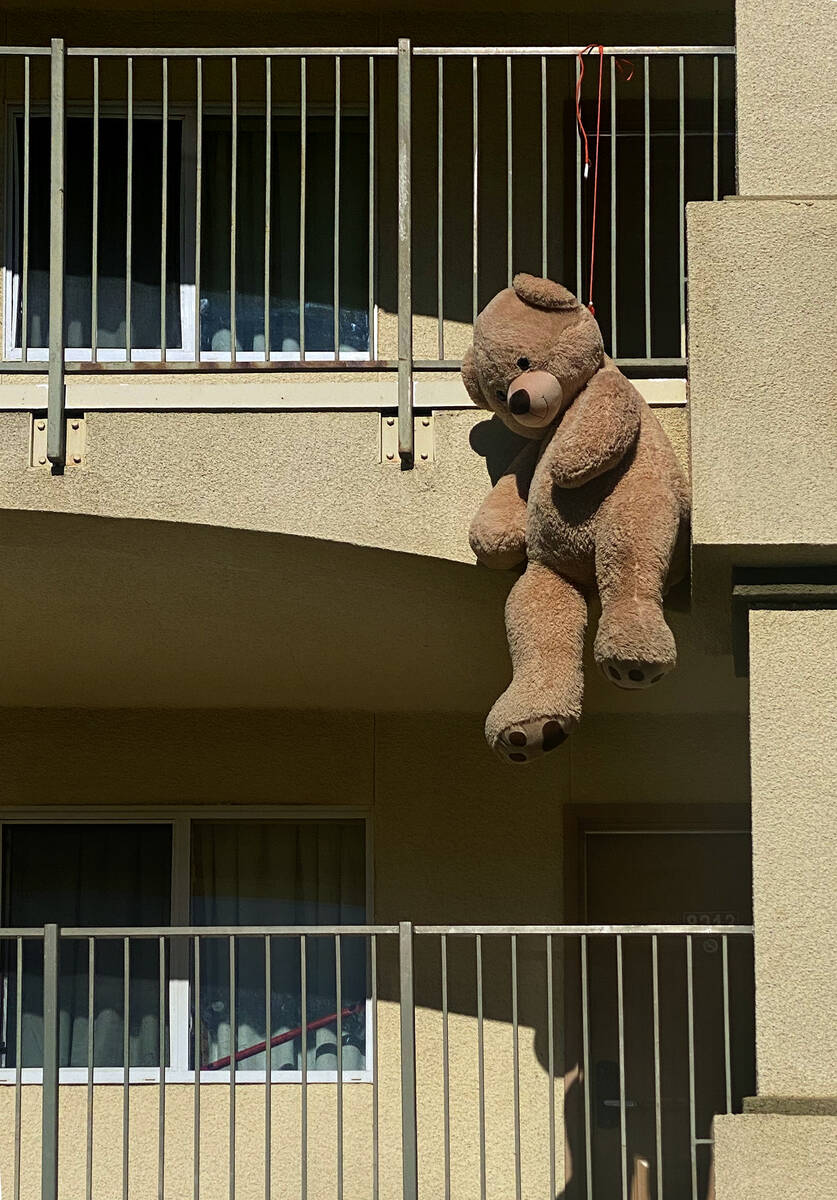 A giant Teddy Bear hangs from a balcony at one of the complexes within the Siena Suites where Metro service calls are high on Wednesday, Oct. 27, 2021, in Las Vegas. (L.E. Baskow/Las Vegas Review-Journal) @Left_Eye_Images 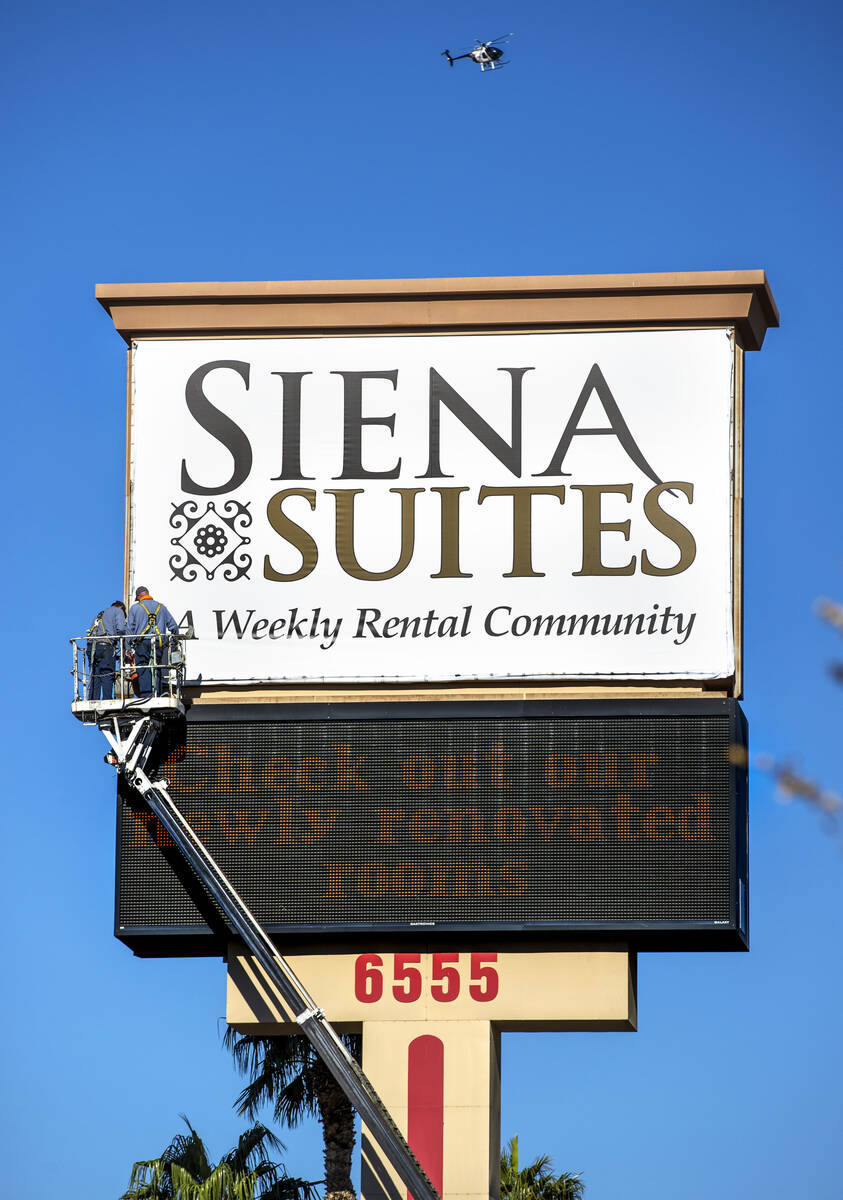 A crew works on the main sign out along Bounder Highway at the Siena Suites where Metro service calls are high on Wednesday, Oct. 27, 2021, in Las Vegas. (L.E. Baskow/Las Vegas Review-Journal) @Left_Eye_Images 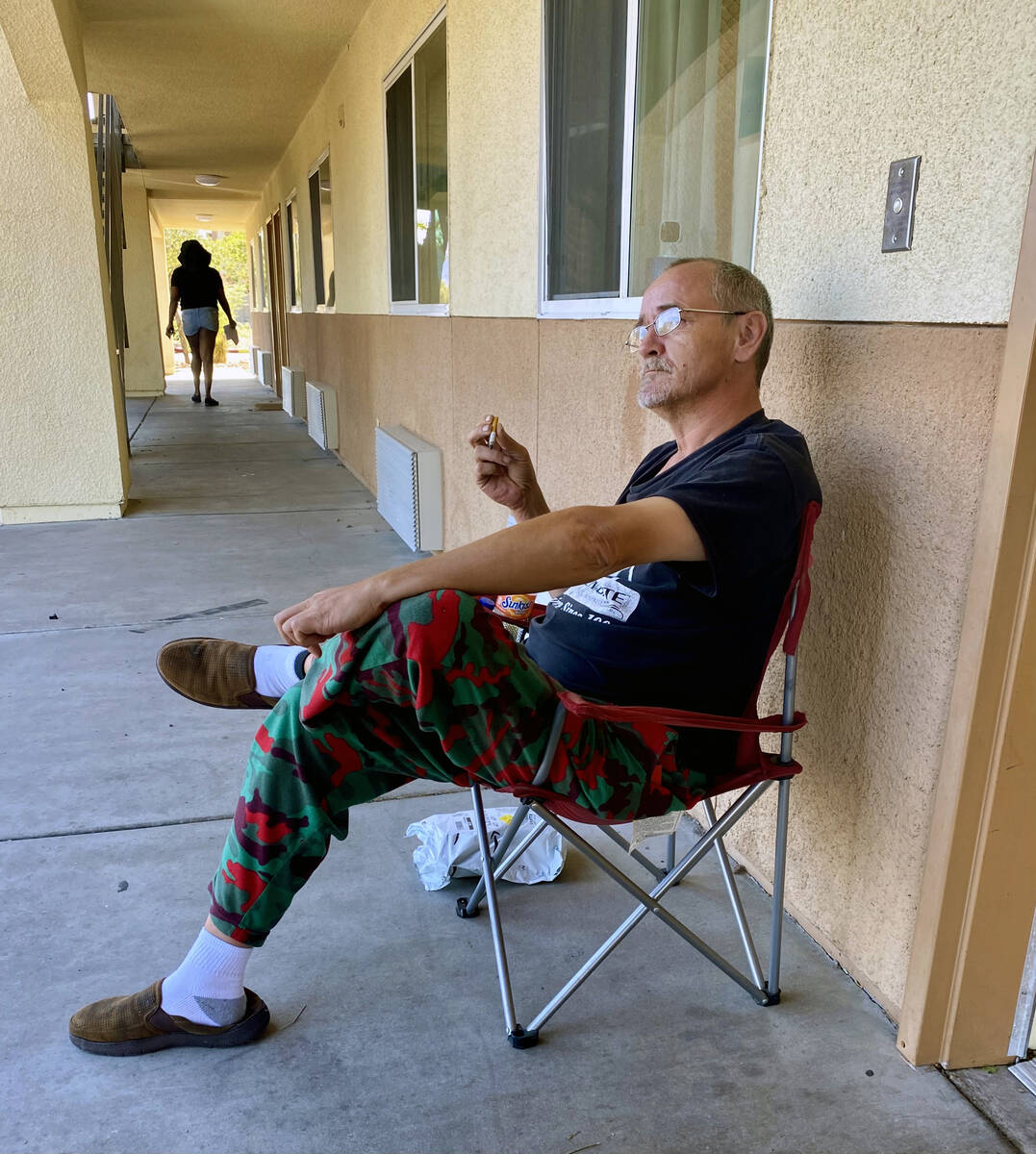 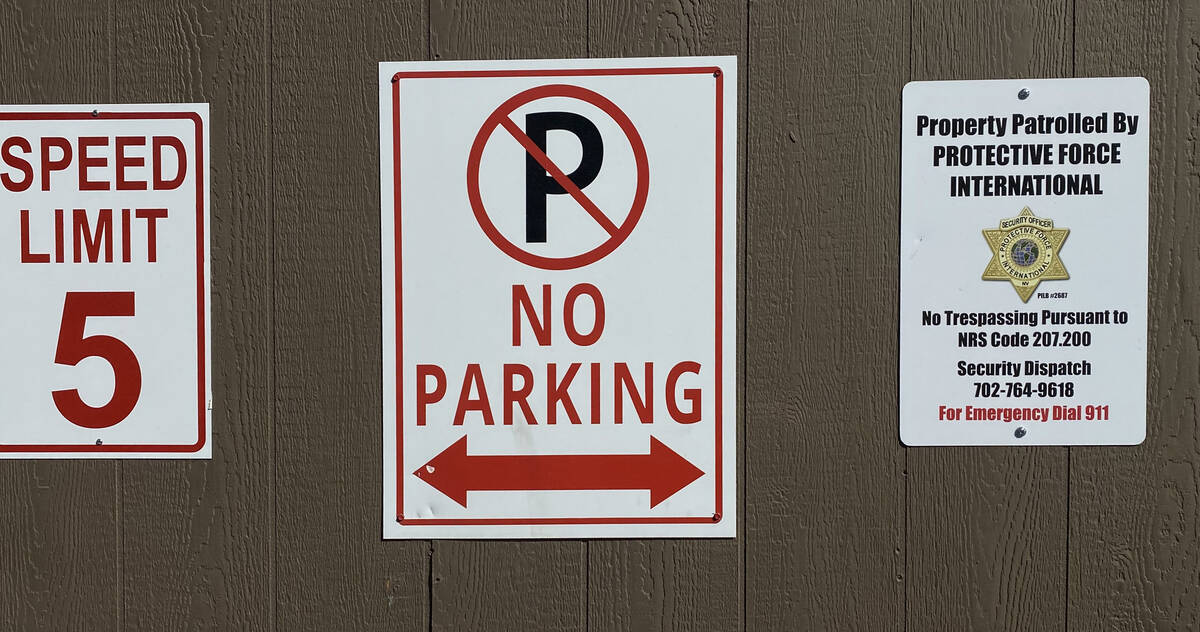 A security sign is posted on the property at the Siena Suites in October 2021 (L.E. Baskow/Las Vegas Review-Journal) @Left_Eye_Images 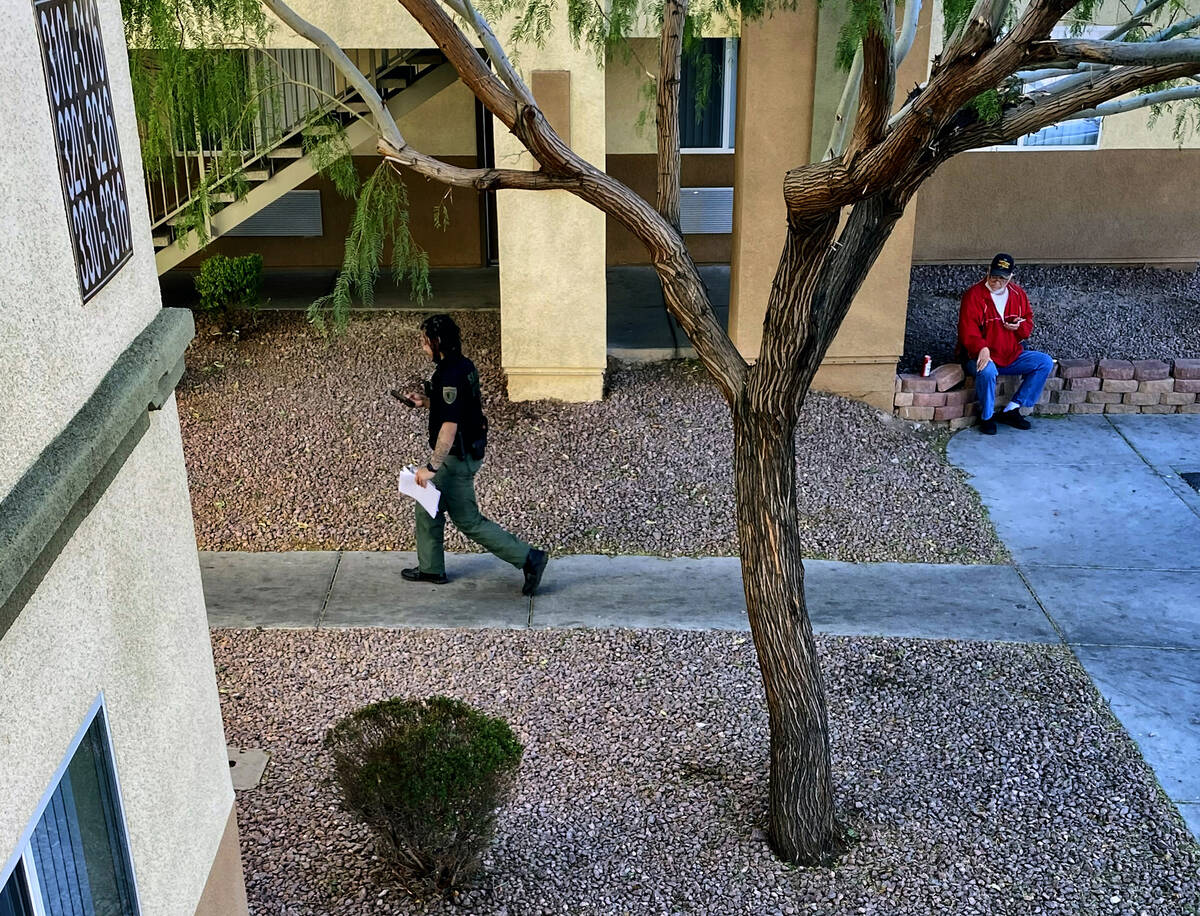 A security guard patrols the many buildings at Siena Suites on Oct. 26, 2021, in Las Vegas. (L.E. Baskow/Las Vegas Review-Journal) @Left_Eye_Images 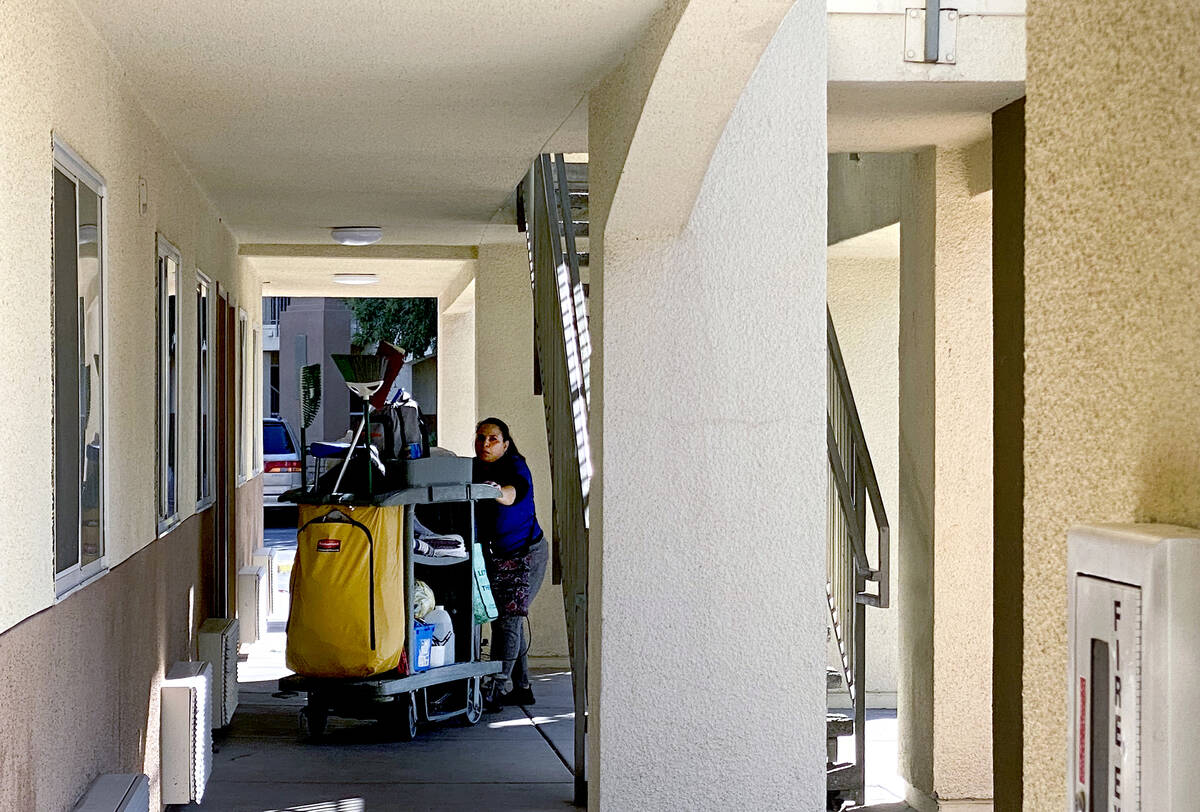 A maid makes the rounds at the Siena Suites on Oct. 14, 2021, in Las Vegas. (L.E. Baskow/Las Vegas Review-Journal) @Left_Eye_Images 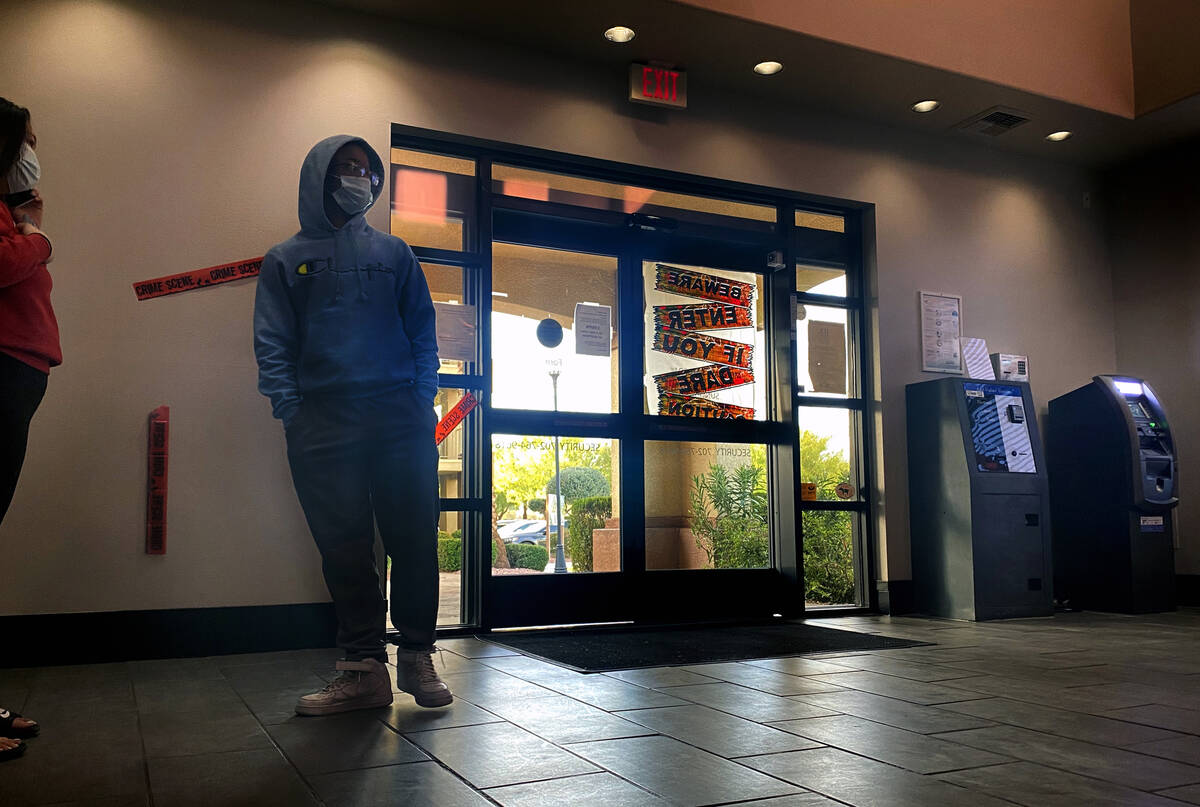 A family waits to rent a room at the Siena Suites office in October 2021. Lines form early in the morning and often only a few rooms are available to rent. (L.E. Baskow/Las Vegas Review-Journal) @Left_Eye_Images

Imani Jones and her pregnant fiancee, Montrese Fletcher, felt hopeful when they moved their growing family into Siena Suites on Boulder Highway in July.

The two had met earlier that year while working at a Wendy’s fast-food restaurant. Jones, 23, had just given birth to her son, Jay’zon. Fletcher, then 19, was pregnant.

Separately, the two young women were struggling to make rent. But together, they realized soon after meeting, they could provide more for their children.

Now, as Jones signed a leasing agreement in the extended-stay motel’s lobby, she felt she was making good on her promise to provide her son a better life, even if it was just for one week at a time.

But the luster of the family’s new home faded quickly.

Inside their apartment, there were roaches everywhere, Jones said. They frequently spotted police at the complex, but still worried about crime.

“I’m very sick to my stomach,” Fletcher said. “I did not pay this much money to live like this.”

Like Jones and Fletcher, other residents were also raising families at Siena Suites. On weekdays, school buses could be seen ferrying children to and from the complex.

One woman, who declined to provide her name for fear of being evicted, snuck in a cigarette outside her second-story unit on a fall afternoon while a baby cried inside. She, too, was unhappy with living at the motel.

“A lot of cops here. Just look at the reviews for this place,” she muttered as she exhaled.

Last year, the Metropolitan Police Department logged nearly 1,200 patrols at Siena Suites and responded there for almost another 900 calls for service, a Review-Journal analysis of law enforcement records shows.

Of the hundreds of motels and apartments in Metro’s jurisdiction, the 600-unit complex is among those police most often visited since 2017.

“They’re just making sure everything is OK,” she said.

The sprawling 14-acre property sits between the highway and a public park. Tenants live in one- and two-bedroom apartments spread across more than a dozen three-story buildings.

To better understand living conditions at the complex, a Review-Journal reporting team rented a furnished one-bedroom unit with a kitchenette for a week in October. The unit had roaches, but the appliances worked and it was tidy.

On check-in day, a line of people began to form outside the motel before its front office opened at 8 a.m.

The property’s sparse vacancies were filled after just three check-ins. The weekly rate came out to $450 after fees and taxes.

“Every morning, it’s like Black Friday,” an employee at the front desk remarked.

Siena Suites’ rental agreement stated multiple times that illegal activity would be reported to police and result in eviction, and that prospective tenants would be subject to a criminal background check for active warrants.

Guests not registered with the front office needed to be accompanied by a tenant at all times, and registration was required for all guests staying for longer than 24 hours. Anyone caught trespassing would be subject to arrest the paperwork stated, and tenants were given instructions about how to contact a 24-hour private security force for “all non-emergency security issues.”

Reporters did not see management or security guards enforcing the lease’s prohibition on “loitering” on the complex’s stairways, parking lots, sidewalks and in front of units. Teenagers hung out in parked cars, while other tenants sat outside in folding chairs or in stairwells, chain-smoking cigarettes.

On a Friday evening at Siena Suites, children played on sidewalks until dark. Adults remained outside longer, congregating in small groups as they talked and drank.

The complex grew quieter as the clock approached midnight. A man wearing a black backpack circled on a small bicycle through the early morning hours, stopping every now and then as people approached him in the parking lot. A Metro patrol car drove through the complex a few minutes before 12:30 a.m., but records show officers did not log the short trip as a patrol.

Cars entered and exited the property unhindered at all hours, with no visible efforts to force compliance with signs stating that only tenants were allowed on the property after 10 p.m.

A uniformed security guard patrolling the property on foot multiple nights during the week was frequently seen focused on his cellphone screen and wearing large headphones.

“When that is noticeable, then we know that security presence is not going to be taken seriously,” said Kathy Cassell, a retired Metro crime-prevention specialist.

During a drive-through of Siena Suites with the Review-Journal, Cassell pointed out what she thought the complex was doing well and where it could improve.

She said the property was well-maintained and had little foliage that someone could hide in, both deterrents to crime.

But she also noted that much of the complex’s exterior had either no fence or a wall that was only about chest high, making it easier for people on foot to come and go without being seen by security.

While some residents like Jones and Fletcher felt unsafe, others said they weren’t concerned.

Geir Brose, 50, said he appreciates seeing police patrol the complex, but he also planned to install his own surveillance camera for added security. He’s lived in extended-stay motels for the better part of the last decade.

“It’s not worse than other places I lived,” he said. “You just have to keep to yourself. If there’s drama, then that’s their drama.”

Fletcher gave birth to her daughter, Jour’nee, in December.

Police records show Fletcher was arrested on a misdemeanor domestic battery charge earlier this month after an argument between her and Jones allegedly turned physical.

In an interview, Jones said Fletcher had not hit her. The couple have reconciled and are still engaged, she said.

They’re looking to find a new home for their children, even if that means leaving Nevada.

“I just want a roof over our head where we don’t have to worry about roaches crawling on us,” she said.