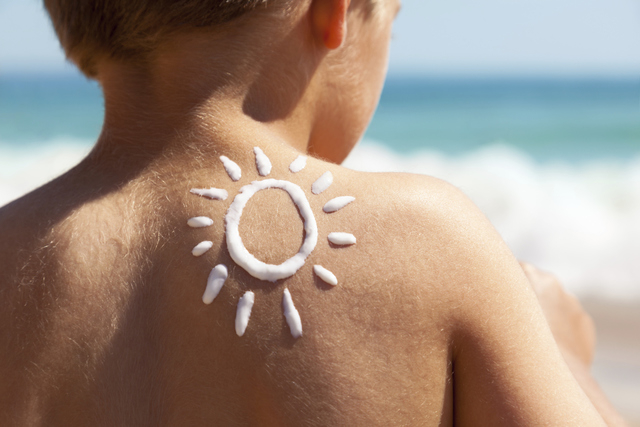 School is out, kids are spending more time outdoors, and if they’re not careful, they’ll be spending at least a few days of summer vacation tending to child-sized sunburns.

What’s the best home treatment for a kid’s sunburn? A few basics will go a long way toward quelling the pain, says Dr. Noah Kohn, an assistant professor of pediatrics and assistant dean for clinical faculty development at Touro University Nevada College of Osteopathic Medicine.

Most cases of sunburn are self-treatable. “As long as it’s not blistered, you probably don’t need to see a doctor,” Kohn says.

“Cool the area down with cool compresses or a cool shower or a cool bath,” he says, and use a nonsteroidal inflammatory drug such as children’s Motrin (ibuprofen) or children’s Tylenol (acetaminophen) to ease the pain.

However, don’t apply topical painkillers such as sprays or ointments, which, Kohn says, “are not actually recommended for children.”

If the burn blisters, “you probably do want to see your pediatrician or pediatric urgent care,” Kohn says, although blistered — or second-degree — sunburns are more typically associated with “someone who’s been using a tanning booth.”

To prevent sunburn, apply sunblock to the child at regular intervals. SPF, or sun protection factor, numbers are “supposedly a multiplier of how much longer you could stay outside before you burned,” Kohn says.

In practice, the numbers’ effects are sketchy. Still, Kohn says, “I would think there would be some sense that an SPF 30 would protect more than a 15.”

Note, however, that swimming, sweating and something as simple as a child’s rubbing a hand across his face can remove whatever protection a sunblock may provide. A good rule of thumb, Kohn says, is to reapply sunblock to your child at least every hour, and more often if he or she is swimming or perspiring heavily.

Another thought: For children who have cellphones, “set your own (reminder) timer and text or call them,” Kohn says. Teenagers might find it annoying, he jokes, but “that’s our job as parents.”

Finally, if you notice that a child, and particularly an infant, is “having a lot of recurrent sunburn or extreme sunburn for the amount of exposure they’ve had, that would be a follow-up to the pediatrician,” Kohn says, “There are certain systemic conditions that can predispose infants to having severe or very frequent sunburns from minimal sun exposure.”

Similarly, while it’s not common, some medications can make a child more apt to develop a sunburn, “and if you do get a sunburn, it’s likely to be more severe.”