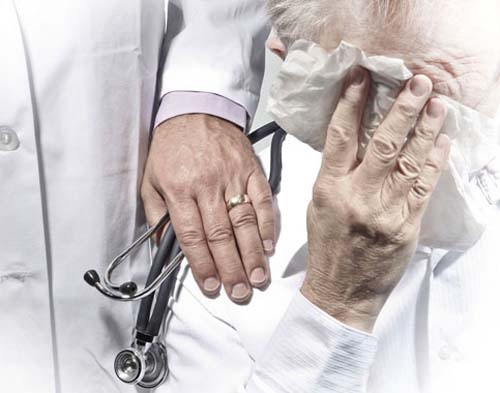 Dr. Tim West still can remember the first time he watched a doctor break the news to a father that his son had suffered permanent brain damage.

"It was just a gut-wrenching experience, one that I would never forget," said West, director of the multiple sclerosis program at the Cleveland Clinic Lou Ruvo Center for Brain Health.

But, West added, "it was very instructive for me on how to deliver really bad news in a way that is palatable, because it’s not always easy, especially when the news is really awful.

"Telling somebody their son will not be able to sit up and feed himself, that is an awful thing to say. Yet the father deserved to have that information, because he needs to know what’s going on."

It’s a fundamental irony of medicine that the same people who heal us also will probably be the people who one day tell us the worst news we’ll ever hear.

"Initially, you go into medicine – I think most people do – with the goal of helping people out and to prevent the time when you have to tell people the bad news," said Dr. Ryan Walsh, director of the Parkinson’s Disease and Movement Disorder Program at the Cleveland Clinic Lou Ruvo Center for Brain Health.

That doctors also serve as the bearers of bad news didn’t, Walsh admitted, really sink in until he got into training, particularly during residency.

It was then, while treating stroke patients, that "I really fell in to the crucible of how you deliver bad news, and it became clear from a few mentors I had that there are good ways and bad ways to do it," he said. "And there’s still no way, in my opinion, to prepare someone for it. It’s one of those things you have to go through."

Dr. James McMurrin, assistant dean for clinical curriculum at Touro University Nevada College of Osteopathic Medicine, said it’s only in the past decade or two that medical schools have begun to offer courses devoted to "medical humanities and, in particular, breaking bad news."

Traditionally, "it’s one of those things you typically learned in the trenches, you might say," McMurrin said, with young physicians tending to model behaviors after older, supervising physicians.

Dr. Karen Jacks, a Nevada Cancer Institute medical oncologist and medical director for the institute’s program at University Medical Center, said, "I don’t recall us ever being sat down and told, ‘This is how you do it.’ "

"I think we have to go with our own personality and how we relate to patients," she said.

The dynamic in which bad news is delivered also varies. For example, unlike a primary care physician or even a specialist, Dr. Deborah Kuhls, a trauma surgeon at University Medical Center and an associate professor with the University of Nevada School of Medicine, doesn’t enjoy the benefit of having a pre-existing relationship with her patients.

Because her patients often aren’t able to communicate with her, Kuhls estimates that half of the bad news she has to deliver is delivered not to the patient but to a patient’s family. That means Kuhls can find herself dealing with several people, all of whom may not agree on the decisions they have to make for the patient.

But regardless of the setting or the dynamic, delivering bad news never comes easy.

"I would say that’s sometimes a daily struggle, even now," Jacks said. "It’s never easy to sit down and tell a patient, in my particular situation, that they either have been diagnosed with cancer or that their cancer is back. It’s not something I ever really feel comfortable with."

Nor is there a standard formula for delivering bad news. However, Jacks said, "I think it starts with compassion, which I don’t think is something you can teach.

"For me, I sit fairly close to the patient. I hold their hand or touch them somehow as I’m talking to them. I feel like it’s very important for them to know I’m focused on and concerned about them and nothing else."

Dr. Hamidreza Sanatinia, a medical oncologist with Comprehensive Cancer Centers of Nevada, might begin by asking patients what they know, what they’ve gone through and what symptoms they have.

"And during that time I’ll find out what they think and start to build up from what they know," Sanatinia said.

Through that conversation, he’ll also gain "a sense of how fast they want to hear it," he said. "Some patients want you to be direct – they want to know exactly what they have and what the prognosis is – and some patients will want to go slow."

"In general, I find directness is the best policy," said Dr. David Ginsburg, an associate professor of neurology at the University of Nevada School of Medicine. "I also reinforce to them that, at each step along the way, I’m here to help them with symptoms that arise."

After receiving bad news, patients invariably will wonder what happens next. Physicians, Jacks said, do well to give them "something to hang their hat on as their next step."

"I think one of the difficult aspects of getting a diagnosis like this is just the feeling of impotence, that your life is spinning out of control, and you just sort of grasp (for), ‘What can I do to improve my situation?’ " West said. "So we have a plan and allow them to attach on that: ‘OK, this is what we’re going to do.’ "

Discussing what’s next – be it second opinion, clinical trial or hospice – also signals to the patient that he or she is not being abandoned.

"I’ve never had a patient tell me, ‘Now that you can’t help me anymore, I don’t want you to be my doctor any longer,’ " he said.

Continuing to be there for the patient even may prove therapeutic for the physician. West said telling a patient that there’s nothing more to be done is "probably the hardest thing for a physician to do.

"You just watch these people in the clinic over time, and you do develop a relationship with them and they become friends with you," he said. "They become people you care about. You know their kids, they bring in pictures of their grandchildren, you become part of their life. So to watch them deteriorate despite your best efforts is hard."

"That being said, there are many wonderful doctors who are able to do that," Jacks added. "I just happen to not be one of them."

McMurrin can offer students an unfortunately compelling perspective on this particular aspect of medical practice: He’s battling stage 4 colon cancer and shares with students his experiences as both doctor and patient.

"A whole segment of my course is devoted exclusively to death and dying, and we talk not just about breaking bad news but the good death – hospice care, advance directives, which a lot of people don’t want to discuss, either," he said.

Kuhls said that delivering bad news became a bit easier for her as she came to realize how important it is.

"Yes, it’s horrible to tell a family that their child has died or has been injured, and there are certain situations for, I think, every physician that are especially sad and difficult," she said. "But I guess the way I reconcile it is, … we can give the best care, but medicine can’t cure everything, so we need to realize when we’ve reached that point.

"It can be difficult, but I think it’s always important for us to say, ‘We did everything we could or everything the patient would have wanted us to do, and we gave them good, compassionate care.’ "

Still, being the bearer of bad news "does get to you," Walsh admitted. "Every single time you have to discuss that with a patient, it gets to you. And if it doesn’t, you need to be very, very concerned about what you are doing."