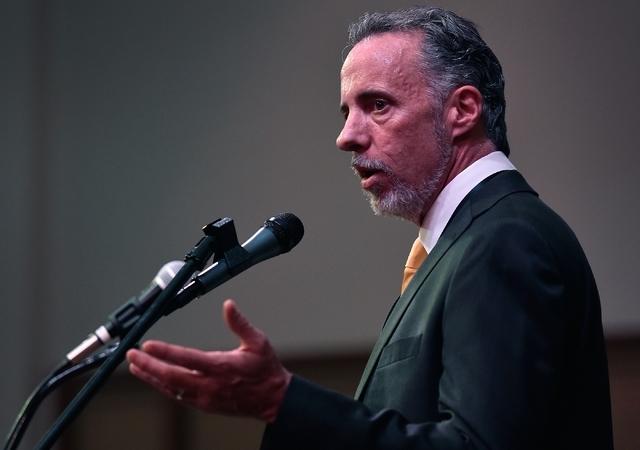 Joe Engle, president of There is No Hero in Heroin Foundation, speaks during the foundation's Black Monday event at The Salvation Army Chapel Feb. 15. David Becker/View 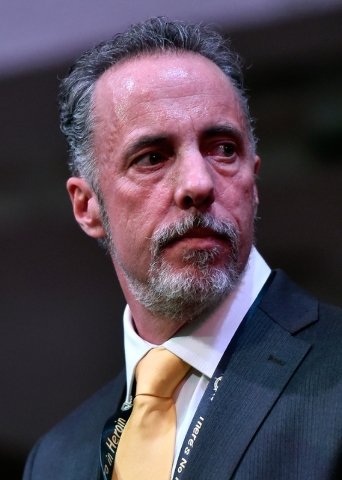 Joseph Engle, president of There is No Hero in Heroin Foundation, looks on during the group's Black Monday event at The Salvation Army Chapel Feb. 15. David Becker/View 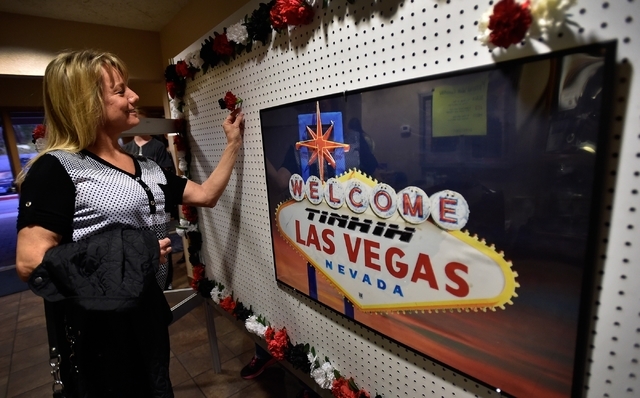 Linda Dressel adds a carnation bloom to a wall of flowers that represents a person who is fighting addiction, overcame addiction or was lost to addiction during There is No Hero in Heroin Foundation's Black Monday event at The Salvation Army Chapel Feb. 15. David Becker/View 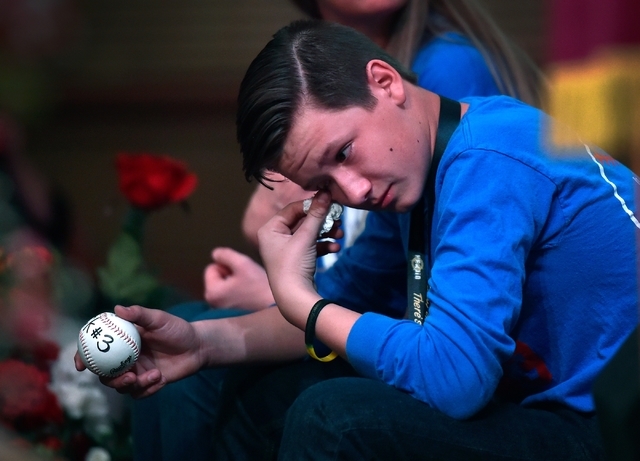 Lucas Vandever wipes his eyes during a presentation about his older brother, Nick Vandever, during There is No Hero in Heroin Foundation's Black Monday event at at The Salvation Army Chapel Feb. 15. The elder brother died from a heroin overdose. David Becker/View 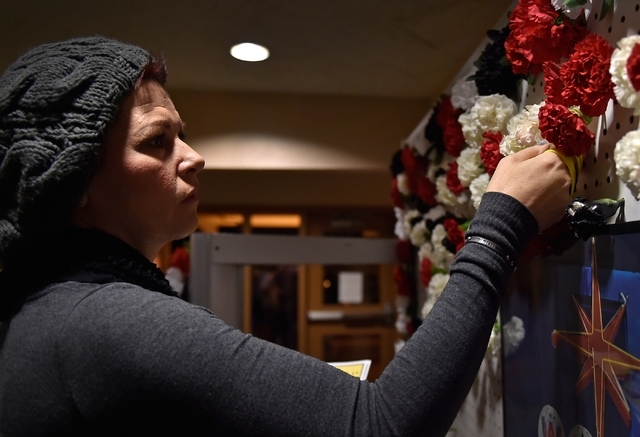 Debbie Hagen adds a carnation bloom to a wall of flowers that represents a person who is fighting addiction, overcame addiction or was lost to addiction during There is No Hero in Heroin Foundation's Black Monday event at The Salvation Army Chapel Feb. 15. David Becker/View 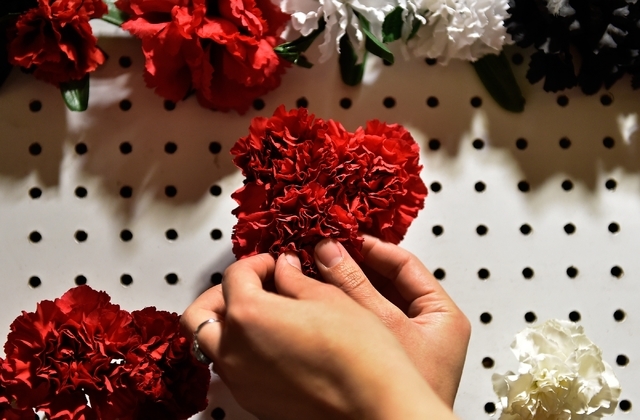 A woman adjusts her carnation bloom as she adds it to wall of flowers that represents a person who is fighting addiction, overcame addiction or was lost to addiction during There is No Hero in Heroin Foundation's Black Monday event at The Salvation Army Chapel Feb. 15. David Becker/View 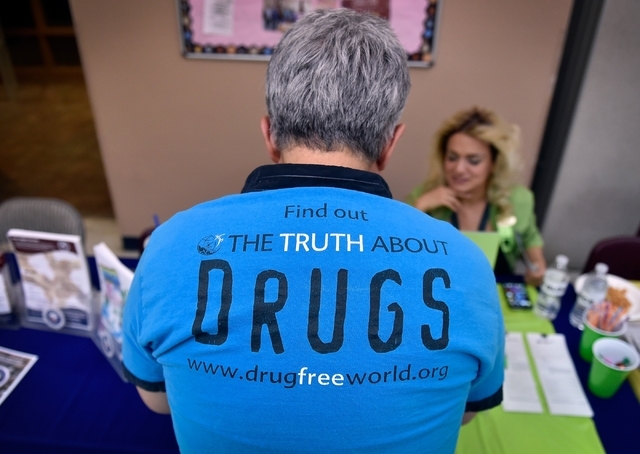 A man looks over one of the vendor tables during There is No Hero in Heroin Foundation's Black Monday event at The Salvation Army Chapel Feb. 15. David Becker/View 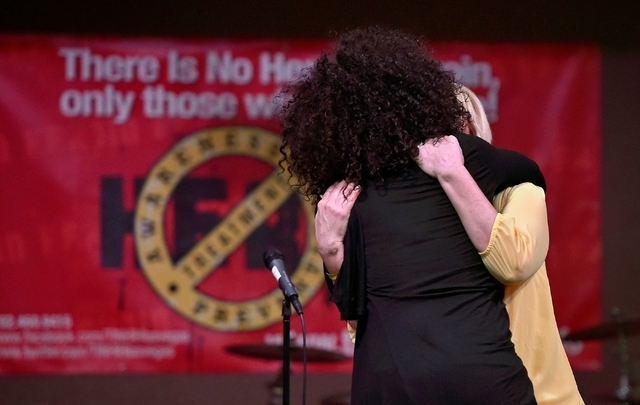 Recovering alcoholics Nyla Christian, left, and Heather Frost hug after they each spoke during There is No Hero in Heroin Foundation's Black Monday event at The Salvation Army Chapel Feb. 15. David Becker/View 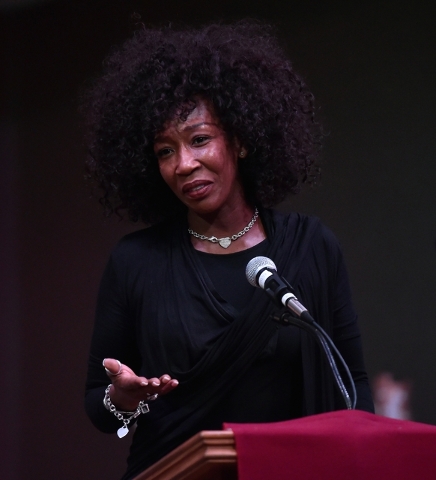 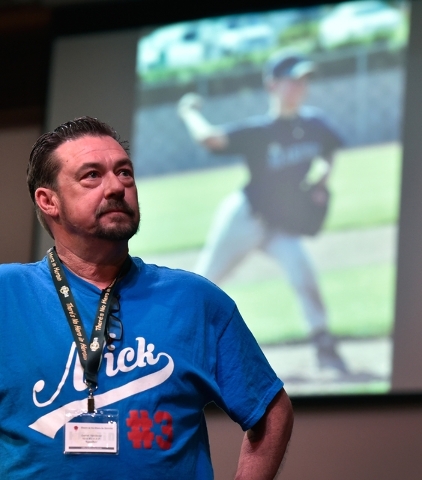 Garret Vandever watches a presentation about his son, Nick Vandever, at There is No Hero in Heroin Foundation's Black Monday event at The Salvation Army Chapel Feb. 15. Nick Vanderver died from a heroin overdose. David Becker/View

As the Las Vegas Valley’s death toll rises from heroin use, a Henderson resident is working to help people escape the drug’s grip.

Joseph Engle — whose 19-year-old son Reese died in 2011 due to the use of the drug — runs a nonprofit called There is No Hero in Heroin Foundation to provide scholarships for residents seeking to move into sober living homes to help them regain control of their lives. Since he started his organization in June 2013, it has provided financial assistance for 16 people, he said.

“After they get out of detox, we offer them money for sober living environments here in town, and typically, they cost between $500 and $600 a month,” Engle said.

Such facilities generally offer room and board and require occupants to take part in a 12-step program or an outpatient program to help them stay drug- and alcohol-free, Engle said.

Based on the rise of fatal overdoses linked to use of the drug in Clark County, getting sober can mean the difference between life and death. The number of fatalities in which heroin was a primary or contributing factor totaled 32 in 2011, 44 in 2012, 48 in 2013, 57 in 2014, and 76 in 2015, said Dan Kulin, public information officer for the county.

The annual number of heroin deaths nationwide also has increased, climbing from 1,842 in 2000 to 8,257 in 2013, according to data on the Centers for Disease Control and Prevention’s website at cdc.gov.

The drug has grown stronger and more accessible over the last two or three decades, making it even more of a threat, Engle said.

“Heroin used to have lots of guns and violence around it, and that was one of the deterrents,” he said. “Today, it’s more potent and a lot cheaper and a lot easier to get. It’s a pizza delivery style, where they bring it to you.”

Lt. Orestes Guerra with the Henderson Police Department’s narcotics division, said the rise in heroin deaths may be caused by the fact that more young people are using it after developing addictions to prescription medication, which can be costly. A standard hit of heroin, meanwhile, is about $10, he said. Younger users also may be at greater risk to overdose from heroin due to their inexperience with hard drugs, Guerra said.

In addition to the influx of younger users, the drug continues to be a problem in inner-city neighborhoods, he said.

“It’s not the potency so much,” he said of the increase in heroin-related deaths. “If more people are using it, more people are going to overdose. That’s just my opinion.”

While heroin is obtained mainly on the streets, Guerra said there are three primary ways youths obtain prescription pills: stealing them from adults’ medicine cabinets; acquiring them from dealers, who purchase them from residents who deliberately request certain medications from their doctors so they can be resold; and ordering them from overseas via the Internet.

Samantha Long, who is recovering from addiction to heroin, is among valley residents who have received financial assistance from the foundation. The nonprofit helped her pay for a portion of her residence at a sober living home in Spring Valley, where she has resided since last September. Now employed, Long pays her own way. Staying in such facilities is crucial to recovering from drug dependency, she said.

“Transitional living is essential to long-term recovery,” said Long, 26, who added she has been sober for seven months. “I’ve done the whole go-to-treatment, go-back-home thing, and going back to the same environment never really works out. If you live in a sober living house, there’s much higher chances to succeed.”

Having supportive people around you also helps, said Long, whose parents care for her children, ages 4 and 2, while she resides at the sober living home. Still, money and support are only part of the equation, she said.

“It takes a lot of determination and action to stay in recovery,” she said.

Long’s efforts include attending Heroin Anonymous and Alcoholics Anonymous meetings, as well as participating in speaking panels around the valley to raise awareness about addiction, she said.

Engle, who said he is recovering from drug and alcohol use and has been sober for 22 years, is engaged in a similar capacity, especially after the death of his son.

“I haven’t really stopped moving since,” he said. “Everything in my life shifted. My whole purpose for being around now is different. My purpose now is helping kids.”

Aside from running his nonprofit, which also serves as a grieving platform for parents whose children have died due to drug use, Engle takes part in the Las Vegas Mayor’s Faith Initiative, participating in work groups dealing with addiction. He also leads monthly support meetings at Solutions Recovery, 2975 S. Rainbow Blvd. Upcoming sessions are planned for noon March 13, April 10 and May 8.

To raise funds and awareness about heroin use, his group hosted a Black Monday event Feb. 15 at The Salvation Army Chapel, 2900 Palomino Lane. Another fundraising event, a Sporting Clay Shooting Tournament, is planned at 8 a.m. May 14 at the Pro Gun Club 12801 U.S. Highway 95 in Boulder City. Registration is $50 and is due by May 7.