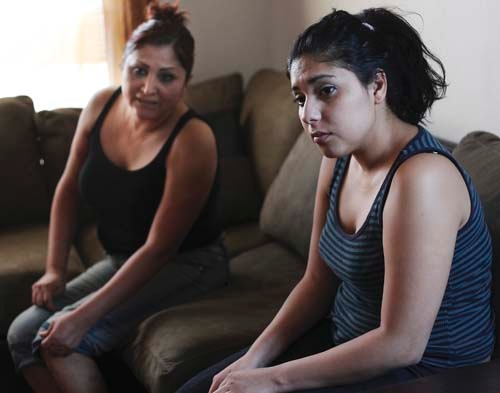 Guadalupe Delgado felt sick to her stomach when she saw the newspaper photos of the two Colombians charged with the murder of a Las Vegas woman as a result of a botched buttocks enhancement.

When the story recounted how Elana Caro died April 9 after receiving injections of an unknown substance from a couple posing as medical practitioners, Delgado almost became paralyzed by fear.

"What could they have put in me?" she asked her daughter, Lupe Negrete. "This is why my legs hurt so much now."

Early evening sunlight sliced through Delgado’s Spring Valley home Wednesday as she and her daughter recounted their association with the two Colombians.

Ruben Dario Matallana-Galvas, 55, and his wife, Carmen Olfidia Torres-Sanchez, 47, are being held at the Clark County Detention Center without bail because they are a flight risk and a threat to the community.

Las Vegas police arrested the couple at McCarran International Airport the day after Caro died as they tried to flee the country, attempting to change tickets that had been purchased for an April 22 return to Colombia.

A preliminary hearing on their murder charges is set for May 17 in Las Vegas Justice Court.

The 49-year-old Delgado, a casino porter who either speaks in halting English or has her daughter translate for her, showed how portions of her lower legs have turned black since she went to the Colombians for treatment of minor spider veins.

"Before, she just had a couple light blue veins that she wanted gone and her legs did not hurt at all," Negrete said, holding her 3-year-old daughter, Lilian. "She was doing it purely for cosmetic reasons, to look nice. But now she has big black spots, and she’s in pain a lot when she walks."

It was the summer of 2009 when Delgado learned about the couple from Colombia who friends said could perform a variety of cosmetic medical procedures safely and cheaply.

"The word of mouth was all good," Negrete said. "My mother trusted what her friends said."

Delgado and her daughter met the Colombians at a two-story house near Interstate 215 and Blue Diamond Road.

"They did their work in one bedroom upstairs," Negrete recalled. "It had a lot of equipment in it, but it seemed clean. They always wore medical clothes."

What she described is a far cry from a small office of the floor-tile business, Tiles N More, at 3310 E. Charleston Blvd., where the backroom procedure was performed on 42-year-old Caro.

Delgado and Negrete pointed out that the Colombians said they performed plastic surgery in Colombia. They said that impressed them because they had heard that Colombian plastic surgeons had a sterling reputation.

What they heard had been very well-publicized by the media. Even USA Today trumpeted in 2006 that "Tourists were headed to Colombia for plastic surgery, " with about 3 percent of 1 million travelers coming for medical treatment.

A Florida woman, the paper reported, lost 56 pounds to liposuction, added to her chest and got her nose fixed, all for $8,000 in Colombia. That same surgery would have cost between $25,000 and $30,000 in the United States.

"Add the quality reputation of Colombian medicine to the savings and you’ve got a good product to promote," the paper reported travel agents and Colombian doctors as saying.

Negrete said that in the Hispanic community Colombian women are renowned for their beauty. While part of it is natural, she said Hispanic publications often report that Colombian women favor plastic surgery to enhance their figures.

"We thought that what Colombia women were getting we could get," said Negrete, who at one point said she considered getting a breast augmentation. "We like to look nice."

Medical authorities in Colombia advise people who want to have plastic surgery there to check if the practitioner is part of the Colombian Society of Plastic Surgery.

Las Vegas police said Matallana-Galvas, who is not licensed in Nevada for any medical practice, told them he practiced homeopathic, or alternative, medicine in Colombia. Homeopathic remedies are based on a natural medical science that supposedly works with an individual’s body to stimulate the immune system.

Marc DiGiacomo, the deputy district attorney prosecuting the case, said at this point it does not appear that Matallana-Galvas attended a medical school that leads to licensing as a medical doctor in the South American country.

Scott Coffee, the public defender representing Matallana-Galvas, said his client is devastated by what happened to Caro.

"Anybody portraying him as a guy with a knife that didn’t care about his patients doesn’t know the case," Coffee said.

Though Coffee said he doesn’t know if his client was licensed to practice surgery in Colombia, he said his client does have "a lot of certificates" showing he had training in homeopathic medicine in South America.

The more Delgado thinks about what happened to Caro, the more terrified she becomes.

"I am scared," she said as she rubbed her discolored calves. "I have to go to a specialist to see what he put in me. I hope it can’t do anything more (to me)."

Delgado said she received eight injections from Matallana-Galvas over a few weeks in 2009, at a total cost of $2,400, at the two-story suburban house. Four injections were for fat bulges in her upper torso, and the other four were supposed to rid her of spider veins.

In April, Las Vegas plastic surgeon Julio Garcia talked to the Review-Journal about cosmetic injection procedures that had gone bad. He said that eight years ago he had to do six surgeries on a woman who had been injected with floor wax.

"You never know what these guys are putting in you, and the women generally never look as good afterward," Garcia said. "And sometimes, as we know, it can be deadly."

The Clark County coroner has not yet reported what was injected into Caro.

Dr. Samir Pancholi, a Las Vegas plastic surgeon, said injections by someone who is not medically trained is dangerous.

"If you don’t know what you’re doing with injections, you can easily go straight into a blood vessel, and whatever you’re injecting will go to the heart and lungs and kill you."

Delgado said the Colombians kept trying to get her to have a buttocks enhancement, but she found the $3,000 price tag too steep. "They said it was what they were really good at."

Many American plastic surgeons charge up to $18,000 for a butt lift.

Delgado was so impressed with the professionalism of the Colombians — "they talked like they really knew what they were doing" — that she had her daughter take a massage course that they offered.

"It cost me $500 for a week of massage courses that are supposed to remove fat from people," Negrete said. "I thought it would be great if I could be trained for a job in a week."

When she went to a salon looking for a job, however, she found that the certificate signed by both Colombians was worthless.

"They said I needed to be licensed in Nevada to do that kind of work," she said.

About the time that her daughter found out that her certificate of course completion wasn’t worth the paper it was printed on, Delgado realized that none of the injections she received worked as she was told they would. Though the fat injection marks went away, the fat was still there. And her legs started having patches of black and they started to burn and throb.

Both women were going to complain to the foreign couple when they learned that they had returned to Colombia.

"We thought about going to the police, but they had gone back to Colombia and we didn’t think it would do any good," Negrete said.

Las Vegas police officer Laura Meltzer said a number of former patients of the Colombians have complained to police about what happened to them. "So far, what they’ve reported hasn’t been too serious."

Delgado said she didn’t go to a doctor immediately after her legs started hurting, because she hoped they would get better on their own. While she was upset that the treatment didn’t work, she never believed that she could have been injected with something dangerous, "something that could still hurt me."

The next time Negrete saw the couple was at the Miami airport just last March.

"I was speechless. I had been visiting down there and was hurrying to get on the same plane they were to Las Vegas. I said hello to (Torres-Sanchez), but it was very evident she didn’t want to talk to me. She did say they were coming back to treat people in Las Vegas."

A month later, the Colombians were arrested on murder charges in Caro’s death.

Now, Delgado and Negrete say they will always look up the credentials of people who say they are medical practitioners. And they plan on talking to authorities about what happened to them.

Delgado and Negrete still find it hard to believe that people without proper medical qualifications would engage in practices that would put others’ lives at risk.

"What kind of people would do that?" Negrete said.

She also wonders if she and her mother had complained to authorities two years ago whether the Colombians could have been stopped from coming back again.

"It’s something I think about," she said.