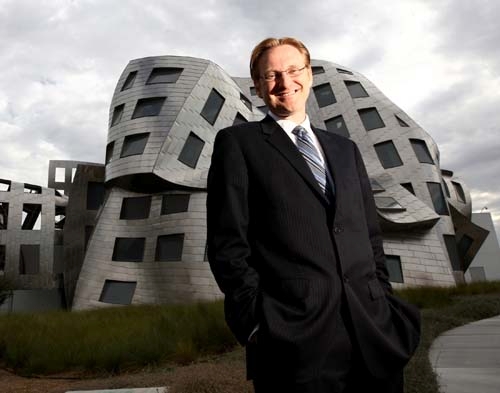 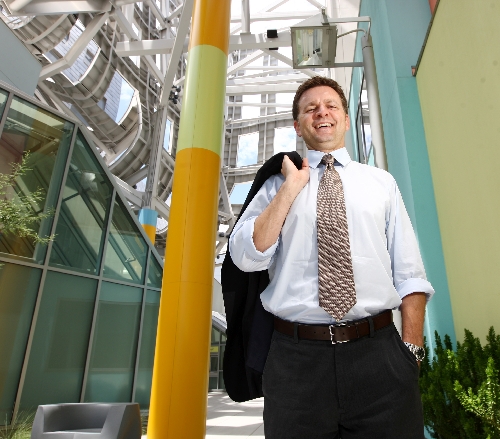 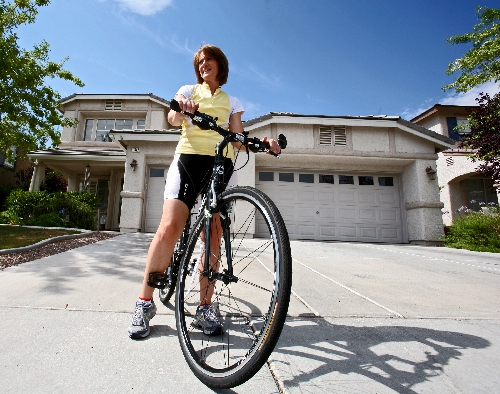 T­he air conditioning wasn’t working in the family car when Timothy West saw his mother slump over in the front seat, complaining that she felt ill.

The teenage boy’s father, assuming that the heat of a Las Vegas summer day had weakened his wife, quickly drove the family to an air-conditioned motel. After being helped inside, she crumpled to the floor.

"She was so scared and so were we," said Dr. Timothy West as he sat inside an office Wednesday at the Cleveland Clinic Lou Ruvo Center for Brain Health near downtown and recalled the day in 1992 that was the beginning of the end of normalcy for the West family. "My mother said as she sat on the floor that she felt as though she had lost control of her body."

Tests would show that West’s mother suffered from multiple sclerosis, an often debilitating disease for about 400,000 people in the United States in which the body’s immune system eats away at the protective sheath that covers a person’s nerves, a process that interferes with the communication between the brain and the rest of the body.

The damage done by the disease has since left West’s mother unable to walk, unable to care for herself. Medical bills forced the sale of the family home. Only because West’s father has devoted himself to his wife’s care is she not in a nursing home.

"What has happened to my mother is the reason I’m devoting myself to research to end this disease and to help those who have it," said the 35-year-old West, who recently completed a prestigious research fellowship into the disease at the University of California, San Francisco, sponsored by the National MS Society. "I feel I have to do something about it. And the Cleveland Clinic Ruvo Center gives me the best opportunity."

In the coming weeks, the center , already respected internationally because of director Jeffrey Cummings’ prolific research into memory-destroying Alzheimer’s disease, will expand its care outside Alzheimer’s to patients with two other disabling brain diseases: an MS program headed by West and a Parkinson’s disease and movement disorders program directed by Dr. Ryan Walsh.

Their support staffs include physical and occupational therapists. Social workers will help the patients’ caregivers. Psychological and nursing help also is available. Patients will get a chance to participate in the latest drug and therapeutic trials for the diseases.

"We’ve identified a real need for specialized treatment," Cummings said last week . "What will make our programs unique here is that the integration of clinical trials into our care allows the patients to help solve these brain diseases themselves. No other facility will be as integrated and empowering as this one."

New Las Vegas Mayor Carolyn Goodman was ecstatic when she heard about the Ruvo Center’s plans.

"I am so thrilled that we will have these new physicians bringing their expertise and research to Las Vegas," she said Thursday. "These programs … put us well on the path to becoming an epicenter for cutting-edge medicine."

Walsh trained in the National Institutes of Health MD/PhD program at the University of Cincinnati and pursued fellowship training at the University of Alabama at Birmingham, where he developed an MRI-based analysis of brain networks underlying cognitive dysfunction in Parkinson’s disease, which causes an individual to lose the ability to control body movements.

Because Parkinson’s, Alzheimer’s and MS are all degenerative neurological conditions, Walsh believes the close collaboration of researchers in all three areas at the Ruvo Center can help unlock the mysteries of brain disease.

"That’s something Dr. Cummings promised we would do, work collaboratively," said Walsh, who has won highly competitive funding from the Parkinson’s Disease Foundation for his research. "That’s a big reason why I came here."

The expansion of the Ruvo Center into the full-time treatment and study of diseases that affect thousands of Nevadans and millions of Americans is welcomed by those battling the conditions.

"Up until this time, there has been very limited access to speciality care for MS in Southern Nevada," said Susan Bradley, an executive vice president with the National MS Society office in Los Angeles. Now, she said, the estimated 2,500 people with MS in Las Vegas will have "the highest level of care that’s available."

Advances in the treatment of MS are coming quickly, West said. "In 1993, the year after my mother was diagnosed, the first MS drug came out. Now there are eight FDA-approved drugs. Three more just finished trials, and there are four more in the pipeline. We now believe that my mother first showed signs of MS right around the time of my birth because she felt tingling and numbness in her extremities. But then no MRIs were available to show the brain lesions."

Advances in treatments for Parkinson’s is something Cidney Donahoo wants to hear about.

Diagnosed with Parkinson’s about a year ago after she developed stiffness and a tremor in her right hand, she is excited about Walsh coming to Las Vegas.

"To have a movement disorder specialist here means a lot," she said. "I’m always looking for ways to treat symptoms without medication."

Donahoo used the Internet to find a Parkinson’s disease movement trial that the Cleveland Clinic opened up to patients in Nevada last year. It involved using a stationary bicycle at a speed faster than a person would normally peddle to help relax tight muscles.

That concept worked so well that Donahoo now rides her own bike.

"It helps loosen up my right side," she said.

About 1 million people nationally, and about 1 percent of Nevada’s population are estimated to have Parkinson’s, according to Walsh.

A literacy specialist in the Clark County School District, Donahoo said biking also helps her deal with the internal tremors of the disease. "When you have specialists in this area, it’s easier to be involved in new ways of dealing with the disease," she said.

"I’m doing pretty good right now," Perrigo said, "but that could end at any time."

Less than three years ago, Perrigo’s Parkinson’s-induced problems with balance often had him crashing to the floor. To get around the house safely, he began crawling. He was so stiff it would take him nearly an hour to go the short distance from one room to another.

He frequently couldn’t get into bed by himself. Trembling and weak, he couldn’t cut his meat at the dinner table. Outside, he used a wheelchair to get around.

He took 22 pills a day in an effort to control the tremors and rigidity of Parkinson’s, but the medication gave him the same erratic, spastic movements that people associate with the actor Michael J. Fox, who also has the disorder.

And then he underwent a surgery known as deep brain stimulation, where electrodes have been implanted deep in his gray matter to jam dysfunctional signaling in his brain. Now he can walk, play golf and go shopping with his wife.

"It has been a miracle, but nobody knows how long this will last," he said.

Perrigo, who attributes his current good fortune to local neurologist Dr. Eric Farbman and neurosurgeon Dr. Aury Nagy, said he plans on one day consulting with Walsh, as well as his current doctors, to see what other treatment is possible should the benefits of his surgery wear off.

"I want to get the best information I can," he said.

Walsh said he isn’t in Las Vegas to steal patients from other physicians.

"We can work together," he said. "Unfortunately, there are so many people with this disease that there are more patients than doctors here can handle. I can be used as a second opinion."

Walsh did say there could be cases where he would refer patients for procedures to the Cleveland Clinic in Ohio, which has neurological expertise that has been ranked sixth best in the United States by U.S. News & World Report. No. 1 in the nation for cardiac care, the clinic is ranked as the fourth best hospital in the country overall.

To be part of an organization that is consistently ranked among the best in the world excites West.

That he ended up in Las Vegas to fight multiple sclerosis makes the native Californian even more curious about life.

"It’s difficult to not think something prescient was at work when I end up working to end a disease and caring for people with it at the same place where my mother first had her first bad attack," he said.