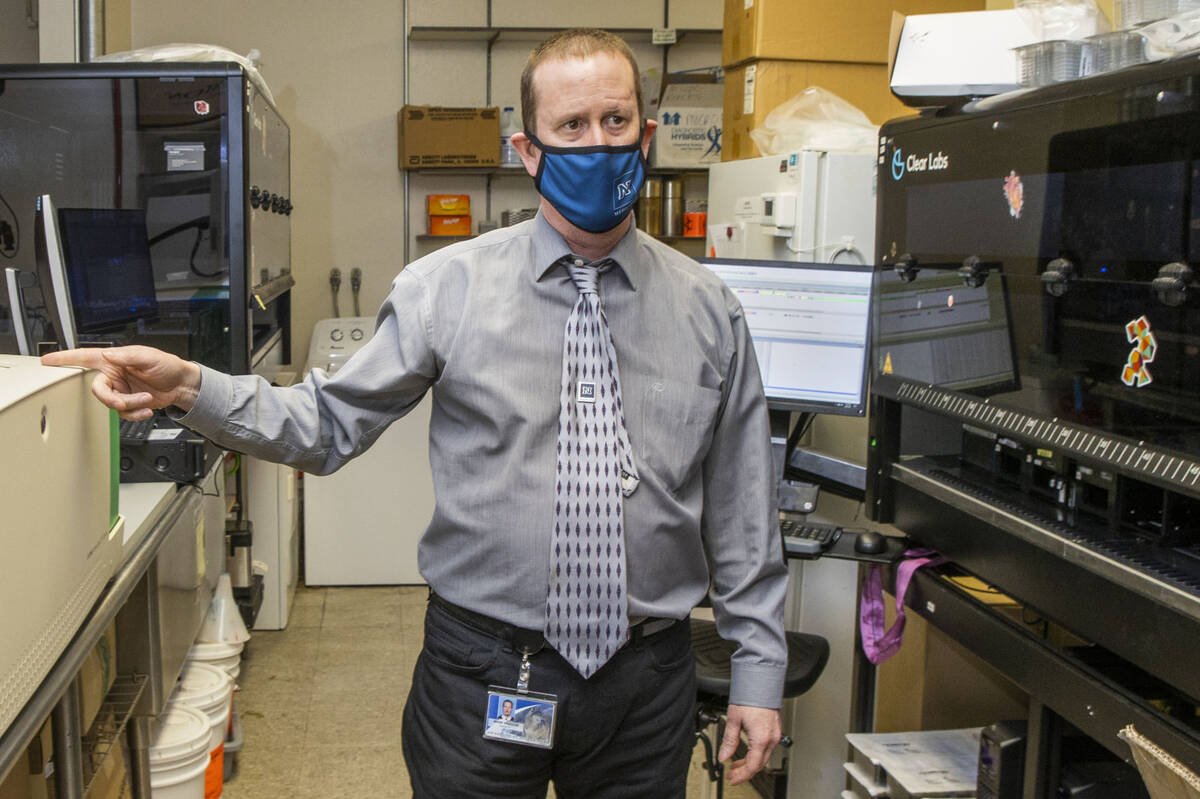 Dr. Mark Pandori, director of the Nevada State Public Health Lab, shows some of the technology on hand, including two automated genomic next generation sequencers used for testing COVID-19 variants, within a lab based out of the UNR School of Medicine on April 8, 2021 in Reno. (L.E. Baskow/Las Vegas Review-Journal) @Left_Eye_Images

A more infectious COVID-19 variant that is quickly spreading west across the U.S. is gaining traction in Southern Nevada.

Omicron subvariant XBB.1.5 has been called the most transmissible variant to date by the World Health Organization. Eyes are on the northeast part of the country, where the variant has become dominant, to gauge its effect on COVID-19 case numbers and hospitalizations.

The variant is concerning because it has the combined bad traits of two omicron subvariants.

“Two existing SARS-CoV-2 viruses sort of mated to bring this one into being,” said Mark Pandori, director of the Nevada State Public Health Laboratory at UNR’s School of Medicine in Reno.

The recombinant virus “actually appears to not only evade the immune system better, but to bind more readily to target cells in our body,” he said. “And so it’s more infectious.”

Because it is not a brand new lineage, but a combination of existing strains, public health authorities have not named it after a Greek letter like alpha or omicron. However, the nickname “kraken” has caught on, a reference to a Nordic mythological sea creature that looks like a giant squid.

Although the strain may result in more cases and hospitalizations, Pandori doesn’t predict a “gigantic” wave as was seen with alpha, delta or early omicron strains.

“It’s not because this virus is a pussycat,” he said. “It’s an advanced, evolved version of this critter,” the coronavirus.

Instead, he expects it to have less impact because most people already have some immunity against the virus due to vaccination or prior infection. What’s more, the new strain does not represent a big evolutionary leap from earlier strains.

Evidence so far does not suggest that XBB.1.5 results in more severe illness.

The Centers for Disease Control and Prevention estimate that XBB.1.5 made up 28 percent of cases across the U.S. last week. In the northeast, the proportion was 72 percent or higher. In the region that encompasses Nevada, the variant makes up just 7.6 percent of cases.

According to data from the public lab in Reno, the new variant represented only 3 percent of positive test samples analyzed in Nevada labs in late December.

However, analysis of wastewater in Southern Nevada, an early warning system for disease trends, indicates that XBB.1.5 is becoming more prevalent.

Its proportions in wastewater increased this week, representing as much as 25 percent of coronavirus genetic material detected at some sampling sites, said Edwin Oh, a researcher and assistant professor with the Kirk Kerkorian School of Medicine at UNLV.

Within wastewater are viruses that infected people shed through saliva, urine and feces, which enter the wastewater system via sinks, shower drains and toilets.

“It’s a little unclear what impact XBB.1.5 might have in Las Vegas,” Oh said. However, since the variant is now dominant in the northeast, “we will be learning a lot from our colleagues over the next few weeks.”

Despite the foothold that the variant has gained, overall levels of the virus continue to decline in Southern Nevada, suggesting fewer new infections, said Daniel Gerrity, principal research microbiologist for the Southern Nevada Water District.

CDC data shows that across the country, new cases and new hospitalizations from COVID-19 increased by about 16 percent over the prior week.

A CDC map of the U.S. shows that levels of the virus are at medium or high levels in much of the eastern half of the country, but at mostly low or medium levels in the western half.

In Clark County and Nevada, there have been only mild fluctuations in case numbers and hospitalizations in the past week.

The 14-day average for confirmed daily new cases inched up in Clark County to 194 from the prior week’s 186, according to new data from the Nevada Department of Health and Human Services. Statewide, the number increased to 245 from 241.

The 14-day average for daily new deaths remained at one in both the county and state.

With the emergence of a more transmissible variant, public health authorities continue to recommend COVID-19 vaccination and boosters.

“We still know the best way to protect yourself — I always say this, especially if you’re over 65 — is to get the bivalent booster,” said Cassius Lockett, director of disease surveillance and control for the Southern Nevada Health District.

For those who do become sick, evidence to date indicates that the anti-viral drug Paxlovid continues to be an effective treatment.