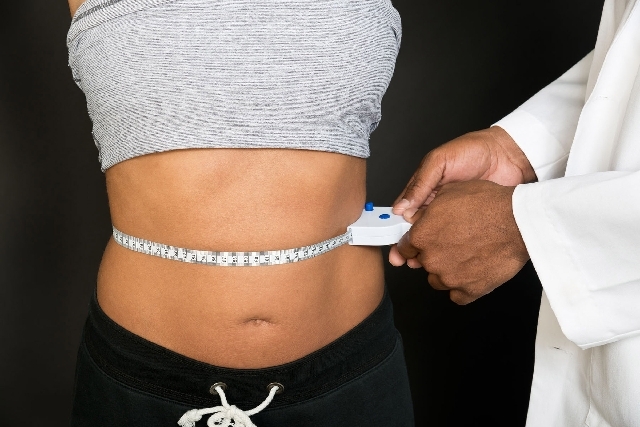 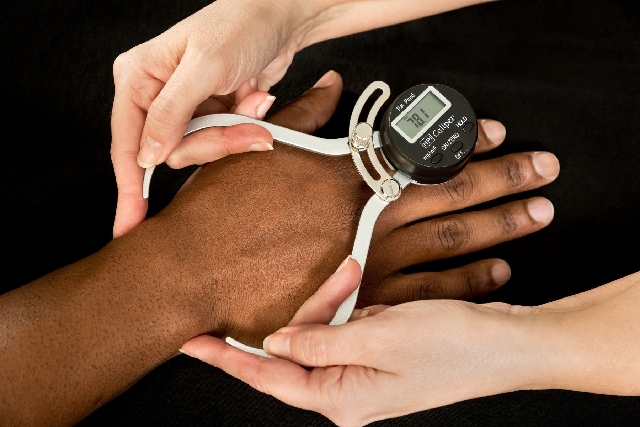 The Integrative Body Composition tool includes a wrist-measuring caliper along with a waist-measuring tape measure. The concept of wrist measuring came from decades-old Swedish research that also looked at body makeup as a means to gauge a healthy weight. 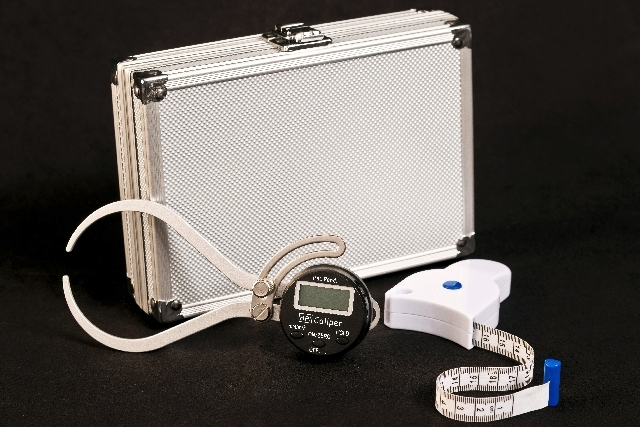 The Integrative Body Composition tool includes a wrist-measuring caliper along with a waist-measuring tape measure. The concept of wrist measuring came from decades-old Swedish research that also looked at body makeup as a means to gauge a healthy weight.

“I’m fat.” It’s a phrase more than a few Americans utter to themselves in front of a mirror in those lowest of moments. But maybe you’re just full-figured? Nope. Your doctor says it’s time to lose some weight. Your scale says it and a few online calculators have weighed in on the issue, too.

But with so much accessible health information, the messages we receive about what a healthy person should and shouldn’t look like are still confusing. And at the root of the confusion for some is an age-old tool known as the body mass index, or BMI. It’s used when considering a person for bariatric surgery (insurance companies mandate it in these cases); primary care physicians use it; and even fitness trainers will whip up the calculation. But what does the BMI really tell us? Hold on, it gets more confusing.

The BMI’s origins can be traced to Belgian statistician and mathematician Adolphe Quetelet (no, he wasn’t even a medical doctor), who in the 1830s tried, through data collection and statistics, to define what he called a “normal man.” The equation he came to in defining “normal” was: weight in kilograms divided by height (in meters) squared. For those not using the metric system, the equation shifts to weight in pounds divided by height in inches squared. This total is then multiplied by 703.

The resulting number falls in a range: less than 18.5 is considered underweight, between 18.5 and 24.9 is a normal weight, between 25 and 29.9 is overweight, and 30 or greater is considered obese. The ranges and calculation’s validity was formalized in 1972, when physiology professor Ancel Keys revealed his study of more than 7,000 men.

Oddly, one of Keys’ beliefs about BMI is that it is a good indicator of body fat composition, which was never a focus of Quetelet’s work. It is a troubling misconception even among today’s most informed consumers.

“It is just a ratio of weight to height. It deals nothing with the whole idea of body composition,” said Antonio Santo, an assistant professor in the department of kinesiology and nutrition sciences at the University of Nevada, Las Vegas. “Why is it so popular? Because it’s easy to do.”

The National Heart, Lung, and Blood Institute, a division of the U.S. Department of Health and Human Services, states on its BMI calculator Web page that BMI “is a measure of body fat based on height and weight that applies to adult men and women.”

Charles Ware, executive director of the Professional Fitness Institute, an educational facility in Henderson that trains future fitness trainers, said he runs into the same misconceptions about BMI with his personal training clients.

“That’s the biggest mistake people will make. They’ll say my BMI is 27 and they’ll equate that with the body fat being 27 percent,” he said. “It could even be higher, or lower. You don’t know.”

Like others, Santo doesn’t necessarily disregard the BMI. But he views it more as a conversation starter than a comprehensive picture of a person’s health.

Most in the fitness and medical fields agree that taking that next step of measuring one’s body fat is a good move. A true assessment of a person’s fat composition could alter the conversation with any fitness trainer for better or worse.

The gold standard for body fat testing is hydrostatic weighing, an underwater method that can cost about $200, Santo said. There are also tools such as the “Bod Pod,” an air displacement plethysmograph, or egg-shaped pod in which a person sits to have body composition measured. Bod-Pod pricing varies, but some centers in the valley show advertisements for as low as $50. There is also bioelectrical impedance, or a scale with hand-held electrodes that measures fat composition. BIA is convenient, but factors such as drinking water, sweating and food intake before the test, can swing results wildly.

Santo, along with Lawrence Golding, a distinguished professor in UNLV’s kinesiology department, recently completed a study for the Integrative Body Composition assessment tool, created by Swedish health product developer Health Profile Institute Inc., which also has an office in Henderson.

The study involved 175 people ages 18 to 70-plus and was completed last summer. The tool proved comparable in accuracy to hydrostatic weighing and was found to be more accurate than Bod Pod, and is more convenient and less invasive, Santo said. He and Golding are looking to publish the findings in a scientific journal.

“(It) was pretty decent at predicting percent body fat when compared to the gold standard of underwater weighing,” Santo said. “That’s a good thing. It’s a nice alternative.”

The Integrative Body Composition tool costs $285 and includes a waist-measuring tape and caliper to measure the wrist. The concept of wrist measuring came from decades-old Swedish research that also looked at body makeup as a means to determine a healthy weight. Measuring wrists or knees helped researchers reach conclusions about whether someone had a larger or smaller frame. The tool’s users also access Health Profile Institute’s software to add measurements such as height, weight, age and average exercise regimen for the past six months.

“We put six months because it usually takes that long to see a major change in your body composition,” said Ileana Stefanescu, the company’s education director.

The test can also be reused. And people who make lifestyle changes can test themselves again a few months later. Oftentimes, people are pleasantly surprised by the results, Stefanescu said, especially when pairing the fat percentage with someone’s BMI figure, which the test also provides.

“Body fat percentage is usually a good indicator of your fitness level, your health level,” she said. “If you work out a lot you can be heavy but you’re not fat. So you are not overweight. … This could be encouraging. You get women who say, ‘I’m so fat.’ They’re not, maybe a little bit curvy, but it’s not so bad.”

“I use the technology with all of my clients,” Ware said.

Like Santo, Ware has seen far too many training clients assume the BMI figure is a body fat percentage and create aggressive and unrealistic workout goals. Once body fat figures are assessed according to the American College of Sports Medicine’s guidelines, the pictures can be worlds apart.

“If I’m a football player carrying around 150 pounds of muscle and I do my BMI it might say I’m overweight or obese and that’s simply not correct,” Santo said.

Ware, at 6 feet 2 inches tall and 205 pounds, is considered obese by the BMI, despite having 10 percent body fat.

“That’s exactly the reason I use this,” he said of the Integrative Body Composition tool.

According to the Centers for Disease Control and Prevention, which uses the BMI as a measure for obesity, more than 35 percent of the adult U.S. population is considered obese, meaning it has a BMI topping 30. The figures could be a little overstated, health officials admit.

“BMI could potentially impact obesity prevalence rates because BMI may overestimate body fat in athletes and others who have a muscular build and it may underestimate body fat in older persons who have lost muscle. The statistics on overweight and obesity using BMI do not take into account an individual’s fitness level,” said Karen Donato, a National Heart, Lung, and Blood Institute spokeswoman.

BMI may be a better assessment for the nonexercising population, Santo said. David Podkameni, medical director of the bariatric surgery program at Banner Gateway Medical Center in Gilbert, Ariz., said BMI is “not an end all, be all” but added “it’s the easier tool to use to see if someone is eligible for bariatric surgery.” Most insurance companies require a BMI above 35 to consider a patient for bariatric surgery, a figure that is well into the BMI obese range.

But Santo said BMI has a role in epidemiology, too.

“Where it’s useful is for large-scale studies drawing correlations between BMI and risk for diseases like Type 2 diabetes or cardiovascular disease,” he said. “But if I really want a better, clearer picture of body composition, then I need to get something that tests my body composition.”

The BMI also falls short on some other critical factors, Podkameni said. Gender, ethnicity and race also need to be considered. For example, there is a prevalence of Asian and African-American populations developing diabetes with BMI’s lower than 35, he noted. Where a person carries fat is also a big conversation Podkameni has with his patients.

“We always look at body-fat testing, too. But it’s not just total fat, but visceral fat (around the abdominal region). That contributes to metabolic syndrome and insulin resistance,” he added.

And it also has an impact on cardiovascular disease, Donato said.

“Cardiovascular disease risks are higher at BMI’s of 25 or more, particularly if individuals carry their weight around their waist,” she said. “This risk goes up with a waist size that is greater than 35 inches for women or greater than 40 inches for men.” 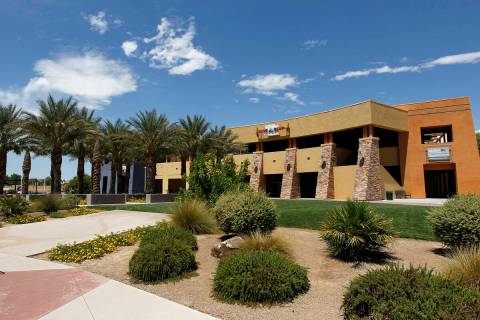