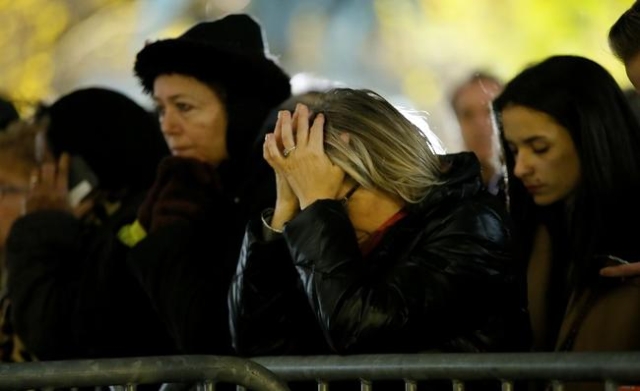 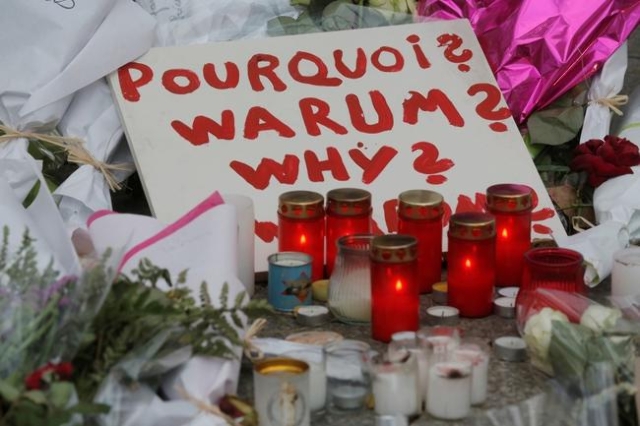 A sign asking why is seen amongst candles and flowers outside the Bataclan music hall following a series of shooting attacks on Friday in Paris, November 16, 2015. REUTERS/Christian Hartmann

Tragic events such as the terror attacks in Paris on Friday and the shootings at Sandy Hook Elementary School in 2013 provoke fear, anger and myriad other emotions in people around the world.

While survivors and their loved ones have the highest risk of experiencing stress and depression, even those who are just watching the event on TV can be affected, said Nadine Kaslow, professor of psychiatry and behavioral sciences at Emory University School of Medicine.

“People are just horrified and they can become very anxious. It shakes their personal sense of safety and security,” said Kaslow, who has counseled 9/11 survivors as well as people who developed anxiety from watching news coverage of 9/11.

Emotions can range from anger to fear to feelings of being disconnected from normal life, said Stephanie Dailey, a member of the American Counseling Association and assistant professor of psychology and behavioral sciences at Argosy University. People may experience physical symptoms, such as stomachaches, insomnia and phantom pain, and mental health problems can worsen, said Dailey, who was an American Red Cross disaster responder after the 2013 shooting at the Washington Navy Yard.

Mass shootings and terrorist attacks can be even more difficult for people to cope with than natural disasters because they often feel the need to blame someone and get retribution, which feeds into their anger, Dailey said. In addition, these incidents affect entire communities, making it harder for people to regain a sense of a normal life, she said.

The good news is that “most individuals are able to bounce back from these things,” Dailey said. Research suggests that between 30% to 60% of survivors of disasters, including human-caused and technological diasters, develop post-traumatic stress disorder. But even these individuals can bounce back to a “new normal” with therapy, Dailey said.

If you think you might be experiencing stress or other problems in response to one of the increasing number of mass shootings or other tragedies, it never hurts to talk with a counselor, Dailey said. “It’s normal to experience a myriad of emotions, but if you are having trouble getting back to your normal routine after a couple of days, that’s when you should be open to talking with somebody,” she added.

Here are some of the things that grief counselors often talk about with survivors of trauma.

Do you have food and shelter?

Immediately after a disaster, whether natural or human-made, the focus is on safety. At the Washington Navy Yard, Dailey and the other disaster responders made sure survivors had food, water and a place to sleep, and that they were able to connect with loved ones and get any medications they needed.

“It’s basic stuff (in the field),” Dailey said. However, once these needs are met, the focus usually shifts to emotional needs.

How stressed do you feel right now?

Near the end of sessions, Dailey asks her clients to rate their distress again. Although clients will ideally feel less distress than they did at the beginning of the session, she really wants to make sure they do not leave feeling more traumatized because of what they discussed.

What has your life looked like in the days since the trauma?

Part of assessing a client’s level of distress also involves asking them to talk about what they have been doing in their day-to-day life. “I ask, ‘If I were looking at a movie of your life, what would it look like since the event?’ ” Dailey said.

These questions have the potential to bring up serious problems, such as whether someone with a history of substance abuse or domestic violence has relapsed or is being violent again, which are concerns after traumatic events, Dailey said. If so, these problems should be prioritized.

What did you see or hear during the event?

It is totally up to the client whether they want to recount the incident during their session, Dailey said. However she does ask them whether they saw or heard anything.

“Sensory experience like seeing a person being shot or hearing a bomb going off are all potentially traumatic (and) their risk of acute stress disorder or long-term PTSD is going to be higher,” Dailey said.

For individuals whose loved ones were at a disaster, “it is almost the same as being there,” Dailey said.

How do you feel about your emotions?

An important step in counseling people affected by tragic events is to help them realize that their emotions are normal, said Emory’s Kaslow.

“It’s understandable that someone is angry, and as long as it isn’t getting in the way of their life, it is OK,” she said.

However, if a person deals with their anger by abusing their partner, for example, there’s a problem.

“The feelings are OK, the actions are not,” Kaslow said. And it is OK for people to have these feelings for months to years and even for the rest of their lives, she added.

What are the actions you can take?

Although a lot of survivors want to go through the narrative of the event, others want to focus on what they can do, Kaslow said. There are several actions that she advises for her clients.

The first is to develop a social support network, which could be made up of friends or family or a religious group or a group of other survivors of the disaster. It is also important to focus on self-care, which for survivors can mean basic steps such as taking the time to eat and sleep. Part of that care can be taking “news breaks” so clients are not constantly reminded of the traumatic event, Kaslow said.

The ultimate goal is for survivors to regain a daily routine, even if it is not the same routine they used to have and even if grief remains.

“When you have a trauma, it’s in the front of the picture of your life. It never goes out of your picture, but over time, you don’t want it to be in the front anymore,” Kaslow said.