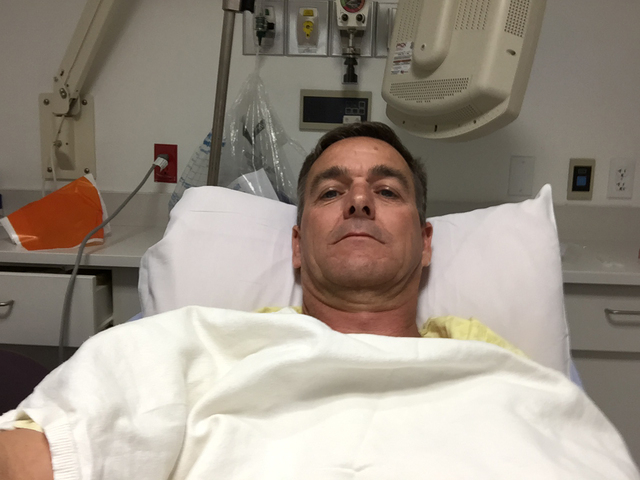 Joey England is seen in his hospital bed before surgery April 1, 2015. He experienced gastrointestinal issues for 10 years before his doctor pushed for a colonoscopy, which is not a common procedure for someone his age, 45. What was found was Stage 3 cancer. Many men resist having colonoscopies﻿, yet the procedure can prove to be a lifesaver, as it did for England. (Special to View) 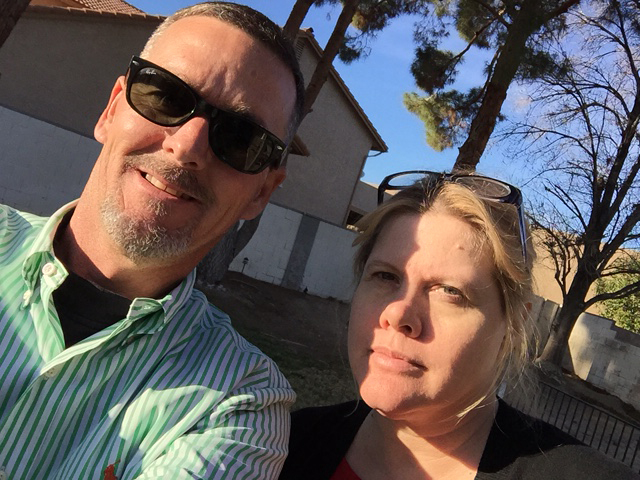 ​Joey England and his my wife, Melisa, are seen in this courtesy photo Dec. 27, 2014, after his first surgery after his colonoscopy﻿ found a tumor that had been growing for 10 years. Colorectal cancer is the third-leading cancer killer among men, and England, who lives in the east valley, underwent radiation and chemotherapy along with surgery. (Special to View)

June is Men’s Health Month, and colorectal cancer is the third-leading cancer killer among men. Finding the cancer is done with a colonoscopy, a procedure that saved Joey England’s life.

Ask any doctor: Men don’t like to talk about colonoscopies, much less get one. Only about one-third of adults 50 or older — the age group at the greatest risk of developing colorectal cancer — get regular screenings, according to the Centers for Disease Control and Prevention. Nevada has one of the lowest screening rates in the country.

England, 45, an east valley resident, can attest to its life-saving benefits. Ten years ago, he noticed blood in his stool and dismissed it as hemorrhoids. Then he began experiencing abdominal discomfort. As the director of U.S. sales and customer support for E-Band Communication LLC, he traveled a lot. Over the next decade, the condition got worse, including cramping, and he said he “couldn’t make a flight without going to the bathroom first.”

England delayed seeing a doctor, saying he was “being bullheaded, until my wife, Melisa, insisted.”

His primary care physician suspected diverticulitis and prescribed penicillin, an antibiotic. It worked great — for two weeks. Then the cramps and discomfort returned with a vengeance, and he went back to his doctor.

“He said, ‘You’re five years too young for a colonosopy, but let’s push for that,’ ” England recalled.

Once his insurance OK’d it, he had the procedure. The doctor sat England and his wife down and gave them the result: He had a cancerous tumor resulting in a 90 percent blockage in his colon. He needed an operation immediately to give him an ileostomy bag or he risked toxins entering his body, which could lead to death.

“I was in shock. It took a week to sink in, that this was real, this was happening to me,” England said. “There was a lot going on in our lives. We were buying a house at the time. We closed on it Dec. 21 and moved in. On Dec. 23, I was in surgery,” he said.

Now saddled with the bag, England underwent 28 sessions of radiation treatments at 21st Century Oncology to shrink the tumor, along with 14 chemotherapy sessions. He had the tumor surgically removed April 1. Even after being shrunk, the tumor was 4.5 inches long and was Stage 3 cancer.

“And I found out that I have a threshold of 10,” he said, referring to the hospital chart for relaying how much pain one is feeling.

England is still undergoing chemotherapy. In August, he will be tested for “hot spots” to determine if he still has cancer cells in his body. After that, he will lose the ileostomy bag.

“If everything is (all right), I’ll have one more surgery to reverse the osteo bag and basically put Humpty Dumpty back together again,” he said.

An estimated 93,090 cases of colon cancer and 39,610 cases of rectal cancer will be diagnosed this year, according to the American Cancer Society. Screening tests find precancerous polyps so they can be removed before they turn into cancer, or detect cancer early, when treatment is most effective. Screenings include colonoscopies, sigmoidoscopies and stool tests.

Colorectal cancers can start with no symptoms. Some people with colorectal polyps or cancer may have symptoms that include: blood in or on stool; stomach pain; aches or cramps that don’t go away; and unexplained weight loss.

The 6-foot-tall England has gone from 190 pounds to 155. He’s changed his diet to avoid red meat and focuses more on vegetables and salads.

Why does he think men are reluctant to have a colonoscopy?

“I don’t know why we’re so stubborn,” he said. “We cut ourselves real bad doing yard work, and we refuse to go see a doctor. … I think we’re afraid of the reality of it.”