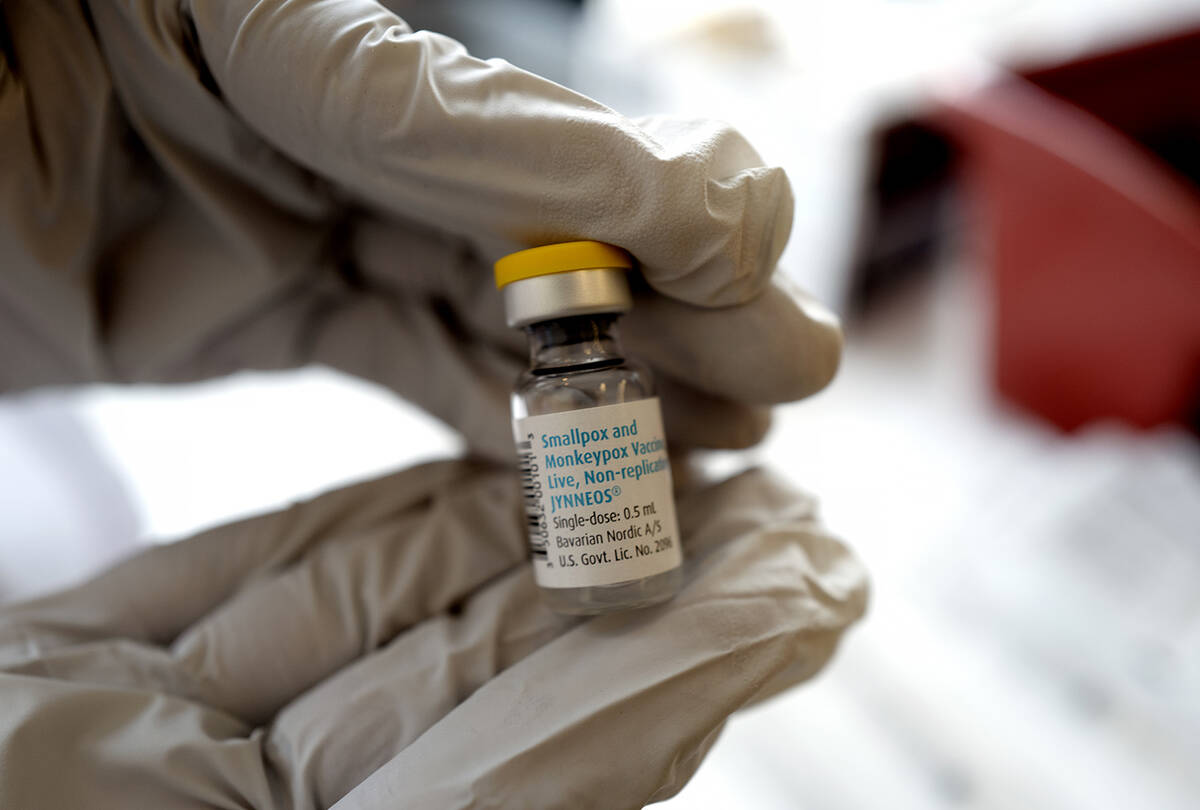 The Southern Nevada Health District announced Thursday that it had received nearly 3,000 additional doses of the monkeypox vaccine as the U.S. declared a public health emergency to bolster the federal response to the spread of the disease.

More than 6,600 Americans have been infected with monkeypox, a viral disease that causes a characteristic rash that resembles pimples or blisters, as of Thursday. There were 24 cases of monkeypox reported in Clark County.

Federal public health officials are attempting to tamp down the outbreak by distributing the Jynneos vaccine to states, which they say can protect people even after they have been exposed to the disease and before they develop symptoms. However, the vaccine remains in short supply across the country.

The vaccine is being distributed from the federal government’s stockpile of vaccines and medical supplies and is being prioritized for jurisdictions that have been hardest hit by the monkeypox outbreak, the health district’s chief medical officer, Dr. Cortland Lohff, said Thursday.

Southern Nevada received an additional 2,956 monkeypox vaccine doses this week. Some will be reserved as second doses for clients who have already received a first dose and for the health district’s disease surveillance and contact investigation activities, according to Lohff.

“I want to assure our community we are requesting the full amount of vaccine we can and making appointments available as soon as the vaccine arrives,” he said. “Having vaccine is of course vital to stopping the outbreak, and we are committed to ensuring that we make all our resources accessible to those who need them the most as soon as they are available to us.”

The Southern Nevada Health District has distributed 700 to 800 doses of the vaccine, Lohff said Thursday.

The health district will prioritize new doses of the vaccine for those who are at the greatest risk for exposure, including those who have had direct contact with someone with monkeypox, and men who have sex with men who may have had contact with a monkeypox case unknowingly.

But monkeypox has also been detected in Southern Nevada’s wastewater, suggesting there are more infections than the two dozen cases reported in Clark County so far, a UNLV researcher said Monday.

The level of virus is “relatively low” and has been detected in wastewater from the Las Vegas Strip and at least one wastewater treatment plant, said Edwin Oh, a researcher and assistant professor with the Kirk Kerkorian School of Medicine at UNLV.

Lohff could not say Thursday how many people would need the vaccine if cases continue to spread across Southern Nevada.

On Monday, governors in California and Illinois declared a state of emergency in their states due to the outbreak of the virus.

The Southern Nevada Health District does not foresee a need to declare an emergency but was carefully watching case numbers as they continue to climb, the district’s public health preparedness supervisor, Misty Robinson, said Thursday.

How is monkeypox spread?

People infected with monkeypox excrete monkeypox virus DNA through skin lesions, saliva, feces and urine, which can enter the wastewater via toilets, sinks and shower drains.

The disease is primarily spread through direct, intimate contact between individuals, according to Lohff.

While it is also possible that hotel bedding and linens could become contaminated with the monkeypox virus, the risk to hospitality workers who are cleaning rooms and changing bed linens is extremely low, Lohff said.

In crowded areas like bars or concerts, the risk of exposure is dependent on the type of setting, what people are wearing and how long they’re there, communicable disease supervisor Haley Blake said.

“It’s difficult to predict without knowing all of those factors,” she said.

People who have an unknown rash or lesions should contact their health care providers and avoid intimate contact with others until they have been tested, according to Lohff.

As of Thursday, health district officials said the appointment portal for vaccines in Southern Nevada and Washoe County was experiencing technical difficulties, but walk-in appointments were available for eligible clients at the Southern Nevada Community Health Center, 280 S. Decatur Blvd.

For more information on the monkeypox vaccine and who is eligible to receive it, visit the health district’s website at www.southernnevadahealthdistrict.org/Health-Topics/monkeypox.