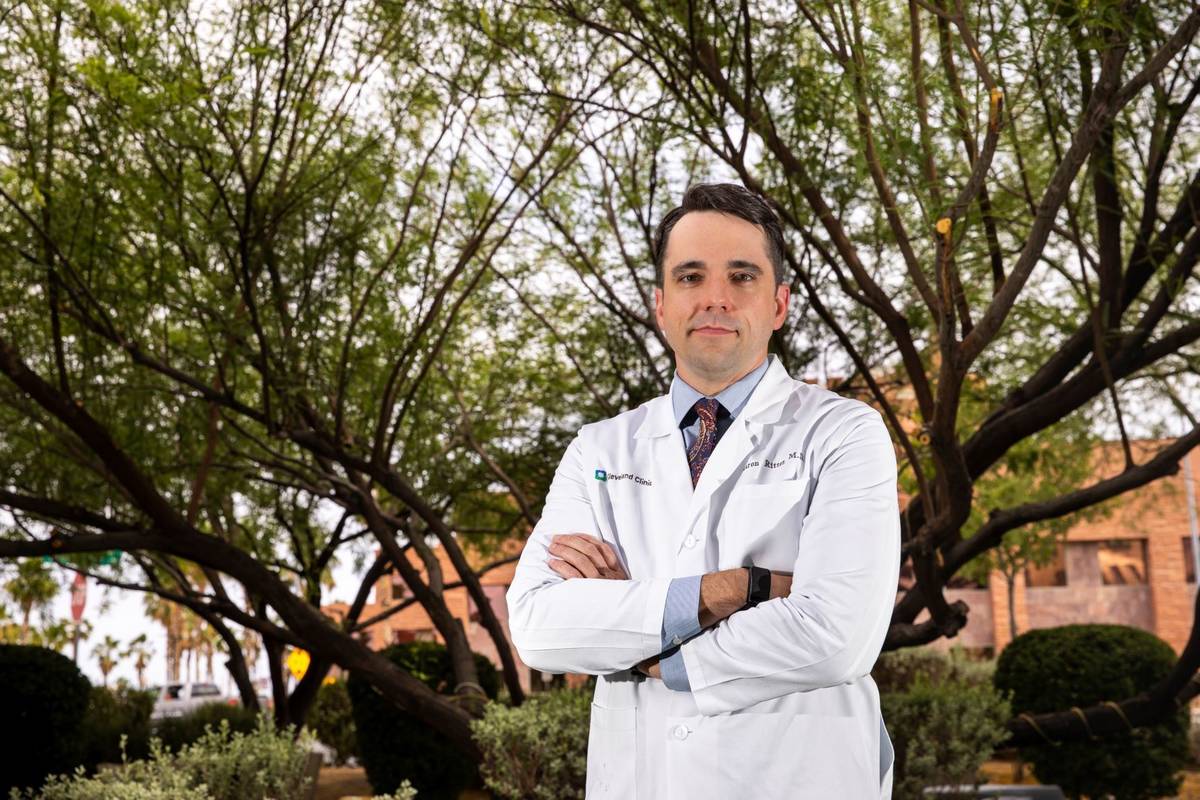 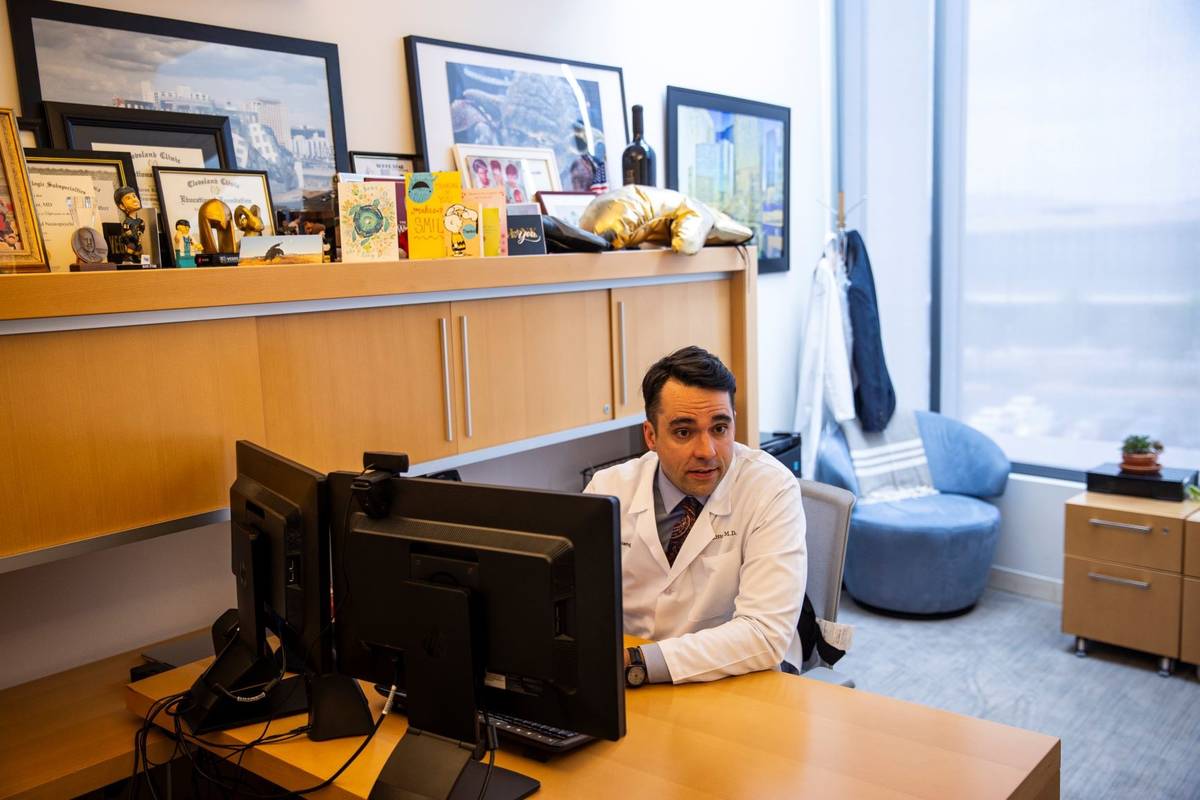 Telephones were ringing off the hook Monday at the Cleveland Clinic Lou Ruvo Center for Brain Health in Las Vegas, with patients calling to inquire about the U.S. Food and Drug Administration’s approval of a drug designed to slow the progression of Alzheimer’s disease.

“We’re very excited,” said Dr. Aaron Ritter, who has served as the center’s primary investigator for clinical trials of the drug, aducanumab.

“We’re excited for the patients who we think this drug may give back a significant portion of their lives, if it slows down the disease the way it showed in the early-stage clinical trials,” Ritter said.

Approval of the drug, which is for patients with mild cognitive impairment or mild dementia from Alzheimer’s, has far-reaching implications for treating other diseases of the brain as well.

“This drug is the first drug for Alzheimer’s disease that looks like it is actually slowing the disease process itself,” said Dr. Jeffrey Cummings, director of the Chambers-Grundy Center for Transformative Neuroscience at UNLV. “And that is so important because that means that we’ve started to crack the mystery of neurodegenerative disease.”

The drug — developed by Massachusetts-based biotech company Biogen with Japan’s Esai company — will be marketed as Aduhelm and given through a catheter or needle every four weeks until scans show improvement in the brain.

Aducanumab is not a cure for Alzheimer’s disease. But unlike other FDA-approved Alzheimer’s drugs, which temporarily improve symptoms, it is the first that may slow down a disease process that gradually robs a person of memory and other mental functions. The last time the FDA approved any Alzheimer’s drug was 18 years ago.

Aducanumab has been shown in clinical trials to clear a sticky protein called beta-amyloid from the brain. Many scientists believe that this plaque impairs communication among brain cells, ultimately killing them.

However, beta-amyloid also is thought to be only one contributing factor in Alzheimer’s disease. The data is less clear-cut on what impact eliminating the protein has on cognitive function.

As a result of the mixed findings, the FDA’s decision was both praised and panned on Monday.

Dr. Caleb Alexander, an FDA adviser who recommended against the drug’s approval, said he was “surprised and disappointed” by the decision.

“The FDA gets the respect that it does because it has regulatory standards that are based on firm evidence. In this case, I think they gave the product a pass,” said Alexander, a medical researcher at Johns Hopkins University.

The agency said it approved the drug, a monoclonal antibody that triggers the immune system, based on results that seemed “reasonably likely” to benefit Alzheimer’s patients.

The decision, which could impact millions of Americans and their families, is certain to cause disagreements among physicians, medical researchers and patient groups. It also has implications for the standards used to evaluate experimental therapies, including those that show only incremental benefits.

The FDA’s top drug regulator acknowledged that “residual uncertainties” surround the drug, but said aducanumab’s ability to reduce harmful clumps of plaque in the brain is expected to help slow dementia.

“The data supports patients and caregivers having the choice to use this drug,” Dr. Patrizia Cavazzoni told reporters. She said FDA carefully weighed the needs of people living with the “devastating, debilitating and deadly disease.”

Under terms of the so-called accelerated approval, the FDA is requiring the drugmaker to conduct a follow-up study to confirm benefits for patients. If the study fails to show effectiveness, the FDA could pull the drug from the market, though it rarely does so.

It also will monitor side-effects. The drug carries a warning about temporary brain swelling that can sometimes cause headaches, confusion and dizziness. Other side effects included allergic reactions, diarrhea and disorientation.

The approval came despite a scathing assessment in November by the FDA’s outside panel of neurological experts. The group voted “no” to a series of questions on whether reanalyzed data from a single study submitted by Biogen showed the drug was effective.

Biogen halted two studies in 2019 after disappointing results suggested aducanumab would not meet its goal of slowing mental and functional decline in Alzheimer’s patients.

Several months later, the company reversed course, announcing that a new analysis of one of the studies showed the drug was effective at higher doses and the FDA had advised that it warranted review. Company scientists said the drug’s initial failure was due to some patients not receiving high enough doses to slow the disease.

But the changes to dosing and the company’s after-the-fact analysis made the results hard to interpret, raising skepticism among many experts, including some of those on the FDA panel.

The FDA isn’t required to follow the advice of its outside panelists and has previously disregarded their input when making similarly high-profile drug decisions.

Cummings, the UNLV expert, described the FDA’s decision as “courageous.”

“I think patients are the winners,” he said.

Cummings, who has received compensation from Biogen as a consultant, said that waiting for the conclusion of another clinical trial would have taken years.

“If I had MCI (mild cognitive impairment), I would know that by the end of that trial, I would already be in the dementia stage, and I would be too late to be helped by this drug,” he said. “And I will have lost my ability to interact with my children and my grandchildren.”

“We want better drugs, greater effects, but you have to start somewhere, and I think— my own opinion — is that (aducanumab) has enough data on efficacy to be that first step,” he said.

The Lou Ruvo Center’s Ritter described the drug as not the “end all be all” but the “first step in the right direction forward.”

“It also poses a lot of challenges and opportunities,” he said about the approval. “But it really is something that is a huge monumental step forward for the field.”

Ritter said among the challenges will be logistical ones, including identifying which patients can receive the drug, in some cases through additional tests and scans. There also will be the issue of how to provide infusions to large numbers of patients, a treatment that is more typically used for cancer patients than those with brain diseases.

Then there is the drug’s cost. Biogen said it would cost about $56,000 for a typical year’s worth of treatment, and that the price would not be raised for four years. Most patients won’t pay anywhere near that amount, thanks to insurance coverage and other discounts.

Many of the patients most likely to receive the drug are older and on Medicare, which typically pays 80 percent of costs, which could still leave patients with a significant bill.

With the logistical challenges, it could be months before the drug is administered to patients outside of clinical trials, Ritter said. Among the Ruvo Center’s patients alone, he said, there could are 700 or more patients who could benefit from the treatment.

Both Ritter and Cummings said the drug’s approval will encourage more research into treatments for Alzheimer’s disease and other diseases of the brain.