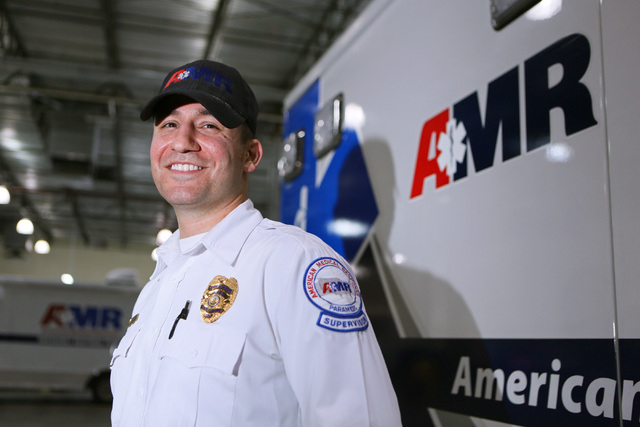 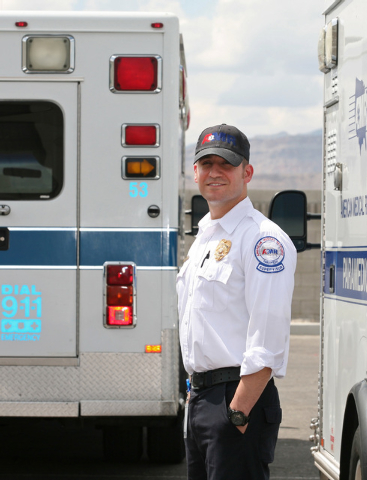 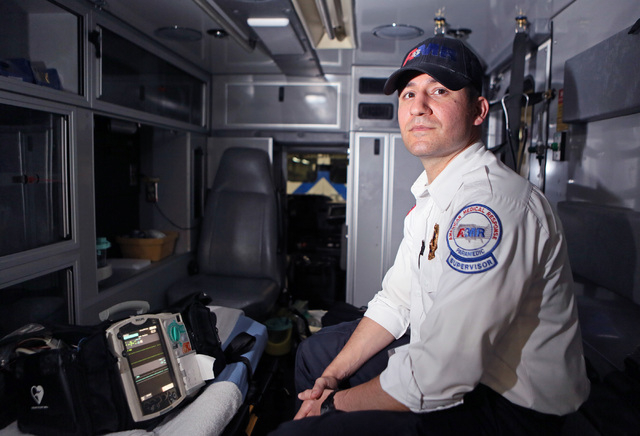 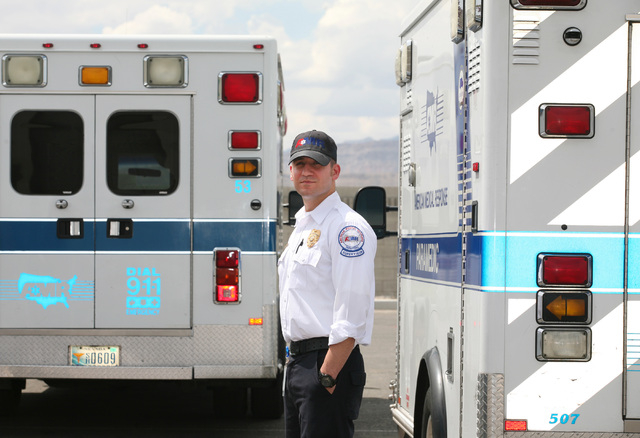 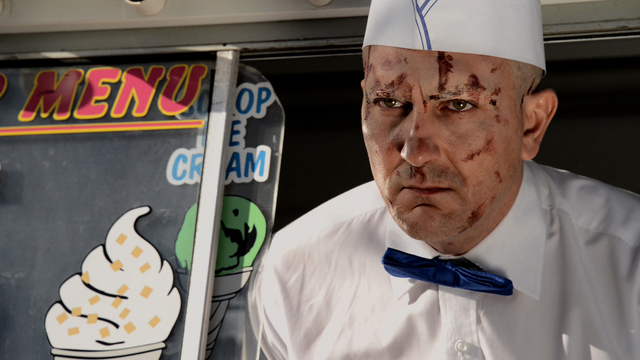 When Frank Marchionne started working the night shift eight years ago as a paramedic, he had heard about the legend of the “paramedic 15,” or the idea that any rookie on the dusk-till-dawn crew is bound to gain at least 15 pounds.

After a year of hectic 12-hour shifts that meant visits to quickie marts and hospital vending machines for anything to keep him going, he gained his 15, times two.

“Everybody says everything is open, you know, Vegas is a 24-hour city, and you find that it’s not when it comes to diet, and you’re usually so busy in the field you’re hitting anything that you can,” said Marchionne, an operations supervisor/paramedic for American Medical Response.

Eventually, he started making juices loaded with fruits and vegetables and taking them to work, as well as healthy snacks such as granola and nuts. While he still has the occasional candy bar or beef jerky grabbed on the go, the extra weight is gone, he said.

“When I was eating the snacks and eating horrible, and I had that 30 pounds, everything was difficult. I’d get winded going up the stairs, which I was always a fit person, so that unnerved me a little bit, so that’s why I changed my lifestyle,” said Marchionne, 34.

There are thousands of night shift workers in the valley who keep everything humming while the rest of us are snug in bed — medical workers, police officers, truck drivers, store clerks, the list goes on. In fact, if any city is dependent upon its after-hours workforce, it is Las Vegas. Casino workers alone prop up a local economy that would be nowhere without its nocturnal side.

The very makeup of their schedules, however, puts night shift workers at higher risk compared with their daytime counterparts for a variety of health issues, including heart disease, depression, obesity and diabetes.

It makes sense when you look at the choices they face. Employee cafeterias often close after hours, which can mean staring down the processed snacks in vending machines night after night. Exercise is a great idea unless, of course, it’s a choice between going to the gym or having dinner with the family before heading to work.

Also, for years research has been pointing to the health risks associated with lack of sleep for the population as a whole. But for night shift workers, who are battling the body’s instinctive sunup-to-sundown circadian rhythm, getting the rest they need is especially tough.

Physician David Park, chair of the primary care department at Touro University Nevada College of Osteopathic Medicine, noted that there is even a term called shift work disorder, used to diagnose employees suffering from insomnia caused by unusual work schedules.

He frequently sees patients in the all-night casino or entertainment industry suffering from the disorder, including dealers, bartenders, servers, and one of the most vulnerable groups in the industry, VIP casino hosts, “who have the most ridiculous hours I’ve ever heard of,” Park said.

He noted that insomnia can be more than just not being able to fall asleep. It can also mean difficulty staying asleep, waking up multiple times and waking up feeling unrefreshed, he said.

“We are extremely vulnerable here. When you’re a 24-hour town, you need more people doing the night shift for various things, that comes from health care professionals, it goes to emergency personnel, firemen, ambulance and police, taxis, you name it,” he said.

Nancy Menzel, an associate professor of community health nursing at the University of Nevada, Las Vegas who studies workers’ health, noted that any kind of shift work outside normal daytime hours, including evening and rotating shifts, makes employees vulnerable.

While it’s important for shift employees to adjust their lifestyles to stay as healthy as possible, employers need to offer some protection as well, she said.

Workers, for example, should have rest breaks every couple of hours while on the job, and be given at least 10 to 11 hours of time off every day, she said. Rotating shifts, or schedules that switch back and forth, should be limited, and night shift schedules should be based on a reasonable ratio of days on and off.

“Research has shown that you should have a break after four, 10-hour shifts, or three, 12-hour shifts. There should be a two-day break,” she said.

Shift workers, she added, are already making sacrifices to their social lives because of their unusual schedules, so it’s important to give them time with their friends and family. One way is to allow employees time off for significant days such as birthdays and anniversaries.

Employers can also educate their workers on how to make healthy choices when it comes to diet, sleep and exercise, Menzel said.

“I think that it’s employers who benefit a lot from people working the night shift. They kind of, you know, for a little bit of differential (workers are) paying with their health and so employers have some obligation to take care of their employees, and it helps the employer, too, by cutting down on turnover and errors,” she said.

They may also want to consult employees who have already tackled some of these issues head on.

In addition to altering his diet, Marchionne has adapted his daily routine in other ways. He exercises a few hours before starting his shift because it tends to energize him rather than helping him sleep. He also has figured out how to balance work with family time and gets his shut-eye thanks to blackout shades and earplugs.

Winding down right after work has also been key.

“The longer I would stay awake and the sun was up, the harder it was for me to fall asleep. And you’re so exhausted. There’s something about watching the sun come up … it’s like, ‘You know what, I need to go to bed,’ ” he said.

Here are some more tips for adjusting to the night shift to improve health, energy level and even productivity at work:

When it comes to eating right on the job, Torey Jones Armul, a registered dietitian and spokeswoman for the Academy of Nutrition and Dietetics, recommends eating small meals or snacks every three to four hours. This helps maintain energy and avoid the feeling of intense hunger that can lead to overeating and choosing unhealthy foods.

She suggests avoiding simple carbohydrates such as chips, sodas and cookies and, instead, taking healthful foods to work made of whole-grain fiber and protein because they provide steady energy over a longer period of time. She recommends foods such as Greek yogurt, berries, nuts, baby carrots, peanut butter and jelly on whole-wheat bread, and dried fruit.

It is also important to stay hydrated with water, at least eight cups a day, because it can help increase energy and provide a feeling of fullness.

Energy drinks should be avoided at work because they are so high in caffeine, equal to multiple cups of coffee, and can affect sleep even if consumed hours before bedtime. In fact, it’s a good idea to taper off caffeine as a shift progresses and steer clear of it entirely once home.

Finally, workers should avoid bingeing on comfort food after a stressful shift because there’s a tendency to turn toward fatty, high-carbohydrate foods, she said.

KEEP IT DARK, WIND IT DOWN

After the night shift, it’s important to wind down by keeping the surroundings quiet and the lights low. The National Sleep Foundation even suggests wearing sunglasses to block out light on the drive home from work since the sun affects the body’s sleep-wake cycle.

When going to bed, bedrooms should be cool, very quiet and as dark as possible, Park said. The darker the room, the better chance the body has to adjust its natural rhythm and induce sleep. Earplugs, eye masks and blackout shades are all tools that can aid in sleep. Bedtimes also should be consistent.

It is also a good idea to resist the temptation to sit in front of a computer after work because the light emitted from electronics can inhibit sleep, Menzel said.

Finally, it’s important for a family to work together so that the night shift worker in their midst is not deprived of vital sleep. Phones can be unplugged or moved to another room, arrangements made for daytime child care and even the family’s social schedule can be adapted, Menzel said.

“So it’s kind of beyond the person setting their own limits, they have to have family support,” she said.

Those who have the symptoms of shift work disorder, including constantly feeling drowsy, difficulty concentrating, increased irritability and depression, should seek help from their doctor, Park said. In the long run, these issues can strain personal relationships and affect work performance, he added.

Workers can become dependent on insomnia medications, so Park doesn’t like to prescribe them. Melatonin, the hormone that induces sleep, is available in supplement form, but the quality of the supplement can vary widely. It is best to seek a doctor’s advice before using it, he said.

ALL IN THE TIMING

Timing can be everything when you work late shifts.

The experts agree that eating a big meal right before bed, for example, is not a good idea because food needs time to digest, and it can disrupt sleep by causing problems such as indigestion and acid reflux.

It’s a good idea, in fact, to avoid eating a big meal two to three hours before bedtime.

“Most of us don’t eat a heavy meal at supper and go to bed an hour later; we go to bed several hours after it’s digested, so you would try to wake up a couple of hours before the shift started (then eat a meal),” Menzel said.

It is crucial for night shift workers to get exercise, which includes benefits such as fighting disease, boosting energy and controlling weight. But the timing of exercise can affect sleep. Someone who gets tired after a workout is better off doing it before bedtime, for example, while someone who is energized by that bike ride or trip to the gym should exercise before they go to work, Park said.

Finally, those who are tempted to go out after work to the all-night bars or nightclubs should remember that alcohol can disrupt sleep, and regular after-work partying can cause long-term issues with sleep deprivation.