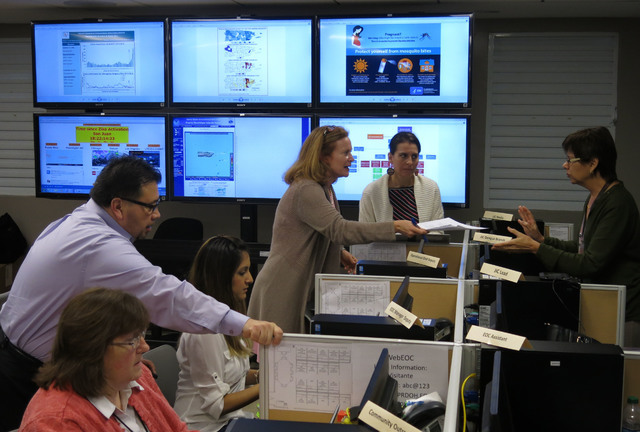 In this Feb. 24, 2016 file photo, workers from the Puerto Rico Health Department and the Centers for Disease Control and Prevention review Zika-related data collected by the island's health department and the CDC in San Juan, Puerto Rico. On June 17, 2016, Dr. Tom Frieden, the director of the CDC, is warning that dozens or hundreds of babies in Puerto Rico could develop severe birth defects because of the virus. (Danica Coto/AP Photo)

The numbers reflect the total number of confirmed Zika cases since the start of the outbreak late last year, a number that reflects largely symptomatic cases of Zika.

In new data released by the U.S. Centers for Disease Control and Prevention on Friday, health officials have also seen a sharp rise in the frequency in which Zika is detected in blood donations.

The numbers are based on the use of a test from Swiss drugmaker Roche Holding AG in use since April 3 to screen blood donations for Zika.

“This is a test that measures actual Zika virus in the blood. It’s highly sensitive and highly specific,” CDC Director Dr. Thomas Frieden told reporters in a conference call Friday.

As of April 3, 68 out of 12,777 blood donations have tested positive for Zika, and the proportion of positive tests “has steadily increased,” Frieden said.

Testing in the most recent week ended June 11 showed 1.1 percent of donated blood was infected with Zika, the highest proportion seen yet in Puerto Rico, Frieden said.

Although the blood donor population is not representative of the general population, Frieden said the increasing prevalence of Zika in blood donations likely reflects increases in the population at large.

The Zika virus only remains present in the blood for about a week after symptoms appear, and diagnostic tests also look for signs of past infections. Frieden said analyzing Zika in blood donations provides a snapshot of current infections in the population at any given time, including asymptomatic cases.

Based on the findings, he estimates that as many as 2 percent of the population is infected with Zika each month.

The estimate suggests over time, there is a substantially higher risk a pregnant woman would become infected with Zika, putting her fetus at risk of birth defects.

That also means in the coming months, “it’s possible that thousands of pregnant women in Puerto Rico could be infected in with Zika,” Frieden said, leading to “dozens or hundreds of infants being born with microcephaly in the coming year.

“The bottom line is we’re seeing a steady increase.”

He stressed pregnant women are the chief priority in the fight against Zika. The virus has been shown to cause microcephaly, a birth defect marked by small head size and underdeveloped brains, as well as other malformations. It is yet not clear whether babies exposed to Zika in the womb with no obvious birth defects will have developmental issues later on.

In Brazil, authorities have confirmed more than 1,400 cases of microcephaly in babies whose mothers were exposed to Zika during pregnancy.

Frieden said the test was highly sensitive, and all blood donations that test positive are removed from the blood supply. Donors who test positive for Zika, an infection that often has no symptoms, are given information on how to avoid spreading the infection to others.

Although Zika is largely a mosquito-borne virus, it can be transmitted sexually and through blood donations.

The Obama administration has requested $1.9 billion in emergency Zika funding. The Senate approved $1.1 billion of that request, but the House of Representatives voted to allocate $622.1 million financed through cuts to existing programs, such as for Ebola, which U.S. health officials have called inadequate and short-sighted.