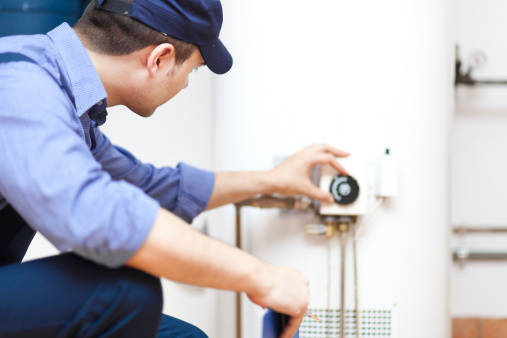 Q: My wife started complaining about a lack of hot water, so I ventured out into the garage to check out the water heater. It is an old water heater, but I took the door off and peeked inside and discovered there was no flame. Following the instructions on the tank, I re-lit the pilot, but as soon as I let go of the button, the pilot light went out. I originally thought a breeze may have blown it out, but now I don’t know what to do.

A: It sounds like a problem with your thermocouple, an inexpensive part that is a safety device at the base of your water heater.

The thermocouple acts as a switch. On one end is a part that looks like the end of a thermometer (this part sits in the flame of the pilot). On the other end is a fitting that screws into the gas valve. Connecting the two ends is a wire.

As the one end of the thermocouple is heated by the flame, a small electrical charge is generated that tells the gas valve to remain open. When the pilot light goes out, the charge stops and the gas valve closes. This prevents gas from continuing to fill up the base of your water heater.

So this little part does a pretty important job. If the thermocouple is bad, no gas will flow, and the pilot will not light.

To change the thermocouple, you will need to disconnect several parts to access it. Before you do anything, though, turn off the gas to the unit. Turn the knob on top of the gas valve to the “off” position and turn off the gas supply valve where the gas flex line connects to it.

Also, remove the small metal door that stops breezes from entering the burner chamber. Newer water heaters have a sealed burner that requires some additional steps.

Gently unscrew the three lines from the gas valve and maneuver the burner assembly and thermocouple out of the chamber. The burner may have a tab at the bottom that slips into a slot at the bottom of the water heater. If so, just lift and push it out of the slot.

Some thermocouples just push into the bracket that holds the pilot in place. Others are secured by a threaded fitting. Unscrew the thermocouple fitting at the bracket (or, if you’re lucky, just pull it out). Your new thermocouple will come with several universal fittings for different sizes and methods of connecting it to the bracket.

With the thermocouple in place, maneuver the burner assembly back into place and connect the gas lines and new thermocouple to the gas valve. Turn the gas back on and follow the directions on the tank to relight the pilot.

Your wife will have hot water faster than it will take you to make up with her.

Mike Klimek is a licensed contractor and owner of Las Vegas Handyman. Questions may be sent by email to handymanoflasvegas@msn.com. Or mail to 4710 W. Dewey Drive, No. 100, Las Vegas, NV 89118. His web address is www.handymanoflasvegas.com.