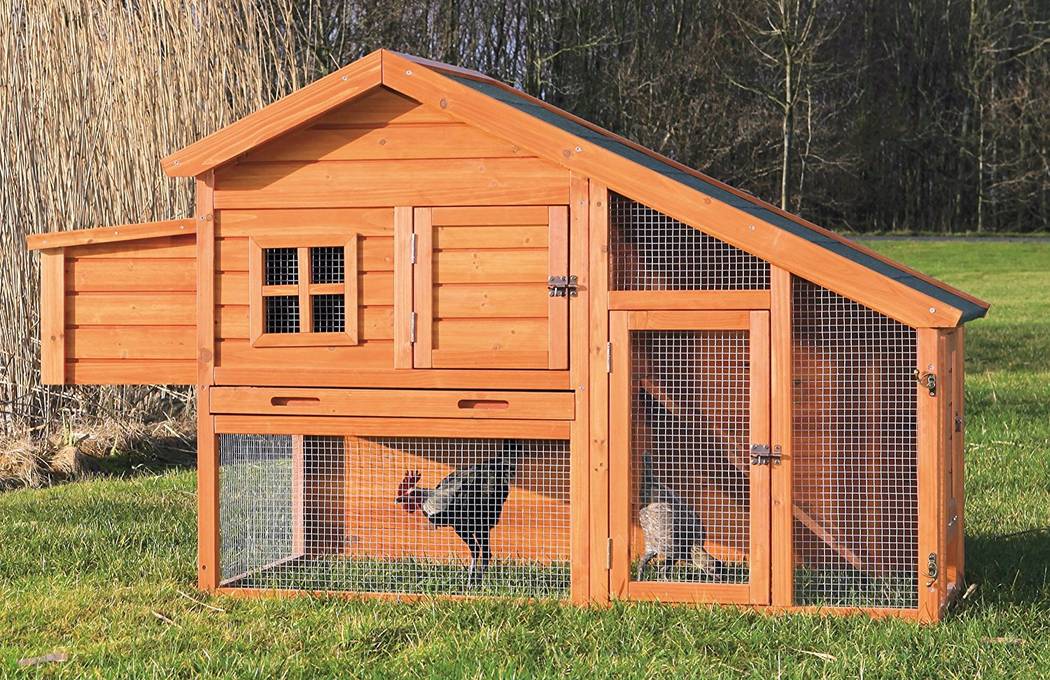 Trixie Trixie offers a line of wooden chicken coops and its products have been sold nationally at Petco, Walmart and Costco.

The history of chickens can be traced as far back as 500 B.C. Early on, the fowl were primarily used as entertainment in the form of cock-fighting, according to some historians. Once people realized the bird produced eggs that could be consumed and that the hen itself could also be eaten for protein, chickens became an important part of human life.

For hundreds of years, it was quite common to see families with chickens roaming around a yard. However, with industrialization and the growth of the commercial poultry industry, backyard chickens became a thing of the past, as families eventually looked to grocery stores for their egg and poultry needs.

“It was sort of looked down upon as something no longer in vogue by World War II,” said Kathy Shea Mormino, also known as “The Chicken Chick,” who writes a blog on the subject of raising backyard chickens. She also recently released her book “The Chicken Chick’s Guide to Backyard Chickens.”

Today, with a growing trend toward families wanting to understand the source of their own food, backyard chickens are now becoming popular again. Some even like them as pets.

Jennifer Kaufman, funding director for the local nonprofit Healing Veterans Through Backyard Agriculture, enjoys relaxing on her backyard hammock while allowing one of her eight backyard chickens to eat from her hand. She also enjoys the egg production, and her two young children are gaining valuable experience in learning how to care for animals. In her line of work, she adds, chickens can be therapeutic for veterans, too.

“When you’re at home and have PTSD, and you’re waiting on your VA claims, you’re lonely and there’s nothing to keep the mind active. … That’s why urban gardening and backyard chicken-keeping is great for veterans,” she said.

Nova Scialabba is a manager at a popular upscale Las Vegas restaurant, but while at home, he takes on a bit of a rural agrarian mindset. As recently as two years ago, he had 11 hens and a rooster in his backyard.

Learning chicken-keeping in the trenches, Scialabba’s knowledge grew quickly. At one time, he even taught a class titled “Raising Backyard Chickens in the Desert” at the University of Nevada, Las Vegas.

As expected, the desert heat poses the greatest threat to keeping chickens in the valley, Scialabba said. “Anything over 85 degrees is pretty warm for a chicken.”

Similar to dogs, chickens don’t have sweat glands and they pant to cool off. Their natural body temperature is between 104 and 107 degrees Fahrenheit. So, it’s important to pick a breed that is not heavily feathered, Mormino said.

“You don’t want to wear two sweaters in the middle of the summer in Nevada. (And) you want a breed with bigger combs (the area on top of the chicken’s head). There’s more surface area for them to give off heat,” she added.

Leghorns are a popular breed for the desert as well as several Mediterranean breeds, according to Scialabba and Kaufman. Leghorns also are inexpensive and are good producers of eggs. All three experts recommend starting out with baby chicks, so they can be socialized to your family situation.

Because chickens don’t have sweat glands and have a higher body temperature, Scialabba cautions against misting systems in chicken coops and runs. “It creates humidity and makes it harder for them to breathe,” he said. “Just making sure there is adequate shade with a shade cloth is the way to go.”

To keep his chickens hydrated during the summer months, he freezes watermelon chunks and ice cubes made of leafy greens and leaves them in water bowls or simply in a place where the fowl can peck at them. Kaufman uses that strategy as well.

Scialabba even recommends getting a “chicken fountain,” which connects to a hose and continuously disperses water into a bowl, allowing the chickens to have fresh water all day long. “I think that literally saved my flock. I could go to work and not worry about one of them knocking a bowl over and not having water,” he noted.

When he had his chickens, Scialabba’s yard had roughly two-thirds of an acre of space, but he only needed about 600 square feet to accommodate a coop and runs. Kaufman shares her backyard space of about 1,800 square feet with eight chickens. She has a swing set and several trees in the backyard as well.

Scialabba emphasizes that the coop must be adequately ventilated, provide protection from wind, offer shade and have construction sand on its floor. Budget a minimum of 1.5 square feet per fowl and one nesting box per four chickens. Allow for 6 to 10 inches of roosting space per chicken, he added. The roost should also be 2 to 3 feet high in the coop, somewhat flat and not slippery.

Mormino says keeping runs and coops clean and dry is critical. So regularly removing chicken waste and raking the sand and ground inside the run is a good idea. Chickens don’t have a bladder. Their urine comes in the form of white spots on feces. So, keeping the space dry and clean isn’t too difficult.

Historically, chickens were seen as scavengers that could eat anything, but poultry nutrition science has come a long way, Mormino said. Scientists working for commercial food manufacturers have zeroed in on the exact nutrients chickens need, and commercial poultry feed should be the only way to go, all three experts said.

“The most important thing you can do to have healthy chickens is to give a complete commercial chicken feed. Little else,” Mormino added.

Some owners think scratch from a feed store is OK for chickens, but that’s not true, Scialabba said. “Scratch is hard to digest, so it will raise their internal temperature.”

Most feed stores will carry good commercial brands, but he tries to opt for minimally processed formulas that are seeds and grains, not pellets.

Local attorney Sarah Morris had pet chickens when she was a child living abroad. She does not keep chickens today but lives in an area of town that has half-acre lots ideal for keeping them. The laws allowing for backyard chickens vary, she said.

“There are certain residential areas you’re allowed to have chickens, but my guess is that with most HOAs it’s going to be a ‘no,’ ” Morris said.

Kaufman lives in the far north end of the valley. Luckily, her HOA gave permission to have chickens, but she also checked with her neighbors before buying chicks.

“I tell everyone make sure you check your ward and ordinances. … We have backyard tours and share our eggs with neighbors, but make sure you’re in a place where you’re allowed to do this,” she said.