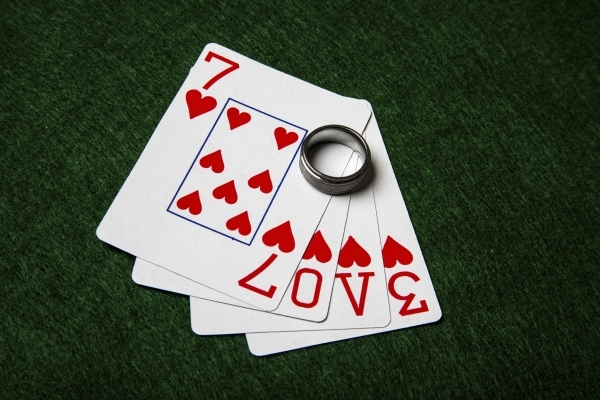 “Las Vegas wedding” is more than a statement of fact. Thanks to movies, TV shows and comedy routines, it has become a stereotype, a cliche, a descriptive phrase for a quickie, spur-of-the-moment marriage that’s doomed to fail.

So consider Lark Voorhies the latest personification of the perils of a Las Vegas wedding. TMZ reports that the former “Saved by the Bell” actress has filed for divorce, seeking to end her made-in-Vegas marriage after just six months.

She’s not alone. The roster of newlyweds who have succumbed to the curse of the Las Vegas wedding includes Britney Spears, Carmen Electra and, almost certainly, a slew of ordinary people you’ve never heard of.

And, as it turns out, Las Vegas is, Wilburn says, “a beacon” for people with impulse control problems.

Imagine: You take a trip to Las Vegas with your guy or gal. Noticing how easy it is to tie the knot here, the fleeting thought occurs that getting married in Las Vegas would be a fun thing — a romantic thing, even — to do.

“So you have a thought in your head, and it’s kind of a wacky thought,” Wilburn says. “The majority of people do not follow through on that thought. Like: ‘We’re not going to get married in Las Vegas. Let’s plan a wedding. We don’t need to do it right now.’ “

In contrast, persons with impulse control issues ‘”get it into their heads, ‘I want to do it right now,’ without thinking it through.”

“People who have these impulse control problems tend to also have some additional issues like gambling or drugs or drinking,” Wilburn says. “And it’s not just in Las Vegas. People have those everywhere.”

What is different here is that Las Vegas not only caters to impulsive notions, “we cater to those impulses,” Wilburn says. “That’s how we make our money.”

Eventually, the impulsively wed will realize that their decision actually was impulsive. Wilburn says there usually “will be a honeymoon period of a couple months. I’d say under a year, and probably six to nine months, you could still be in the honeymoon phase.”

After that, “thinking starts to kick in,” Wilburn says. They disagree about having children, or have trouble getting into a healthy daily routine, or realize that they don’t really know their new spouse well or don’t have much in common at all.

So what should go through somebody’s mind at the same time as the thought of a spur-of-the-moment wedding?

“I think it’s a good idea to get a second opinion from someone who’s healthy, from a calm, rational person,” Wilburn says.