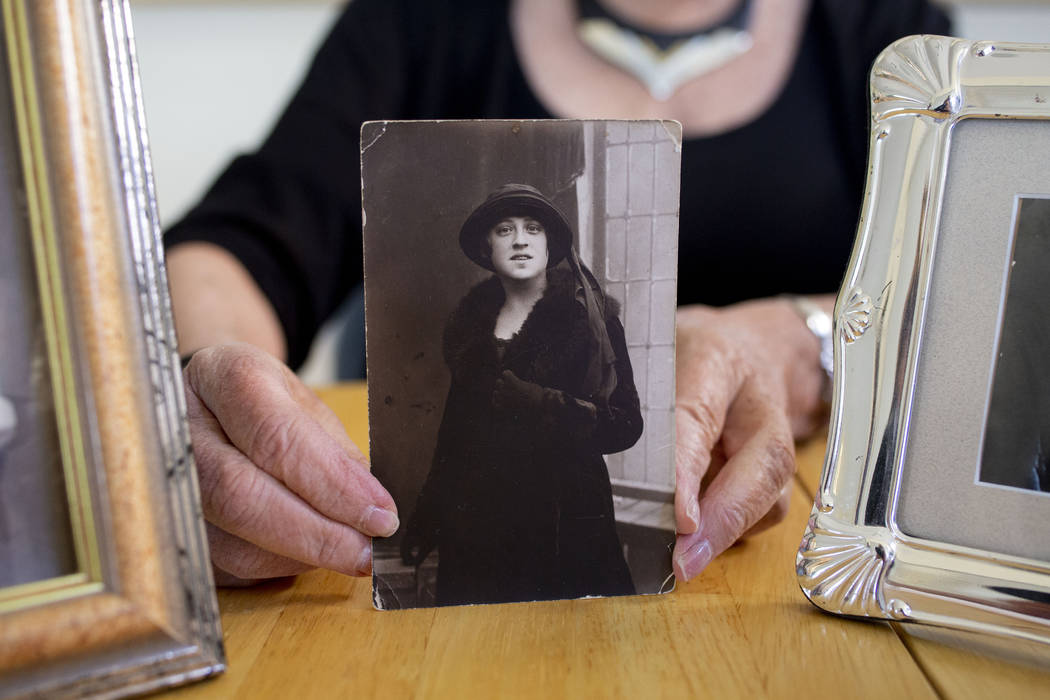 Author Joanne Gilbert holds a photo of her beloved great-aunt Rivka Wineman in Vilna Lithuania in 1941 before the German occupation, in her Las Vegas home on Thursday, Oct. 31, 2019. Much of Gilbert's inspiration and drive comes from the stories about Rivka and other relatives that Gilbert heard from her grandmother. (Elizabeth Page Brumley/Las Vegas Review-Journal @EliPagePhoto) 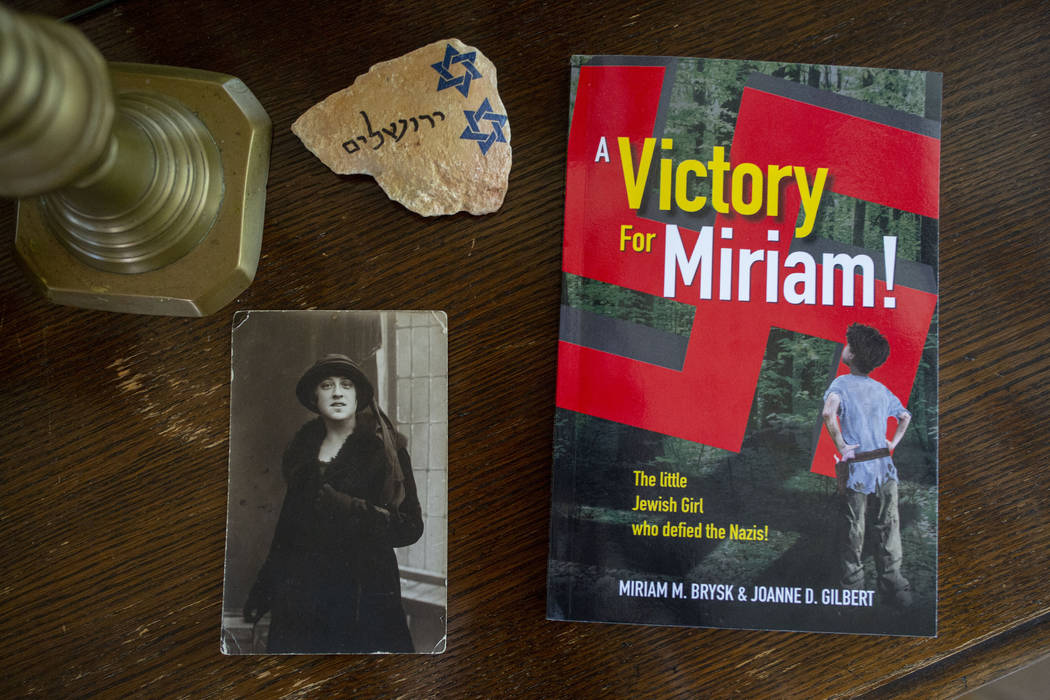 Author Joanne Gilbert's recent book, A Victory For Miriam, next to a photo of her beloved great-aunt Rivka Wineman in Vilna Lithuania in 1941 before the German occupation, in her Las Vegas home on Thursday, Oct. 31, 2019. Gilbert's book will be released Nov. 10, 2019. (Elizabeth Page Brumley/Las Vegas Review-Journal @EliPagePhoto) 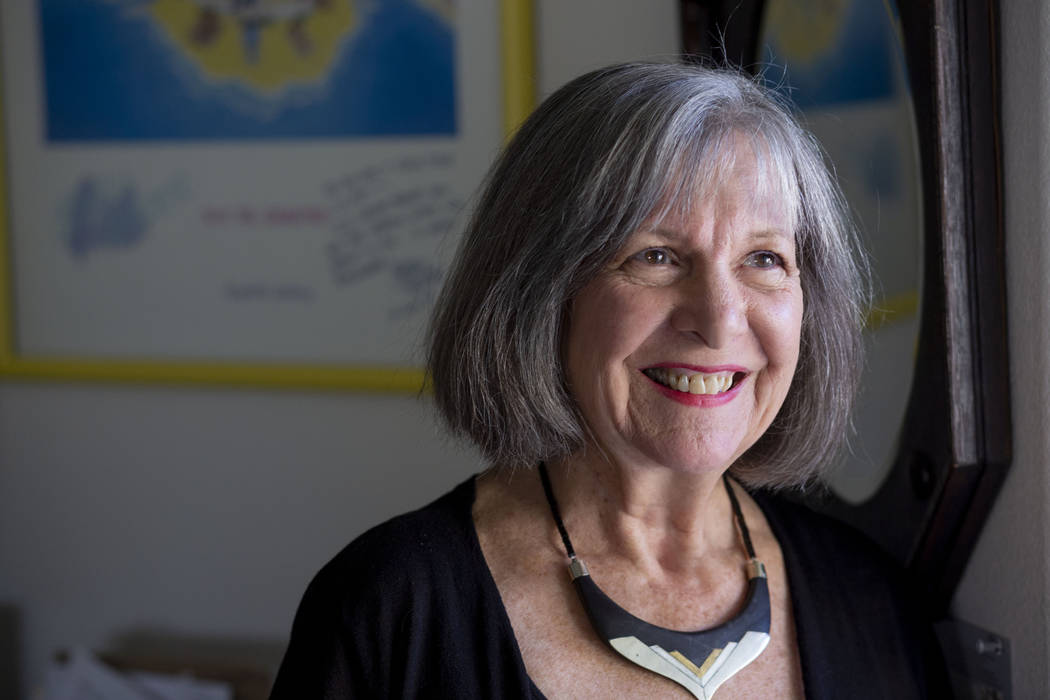 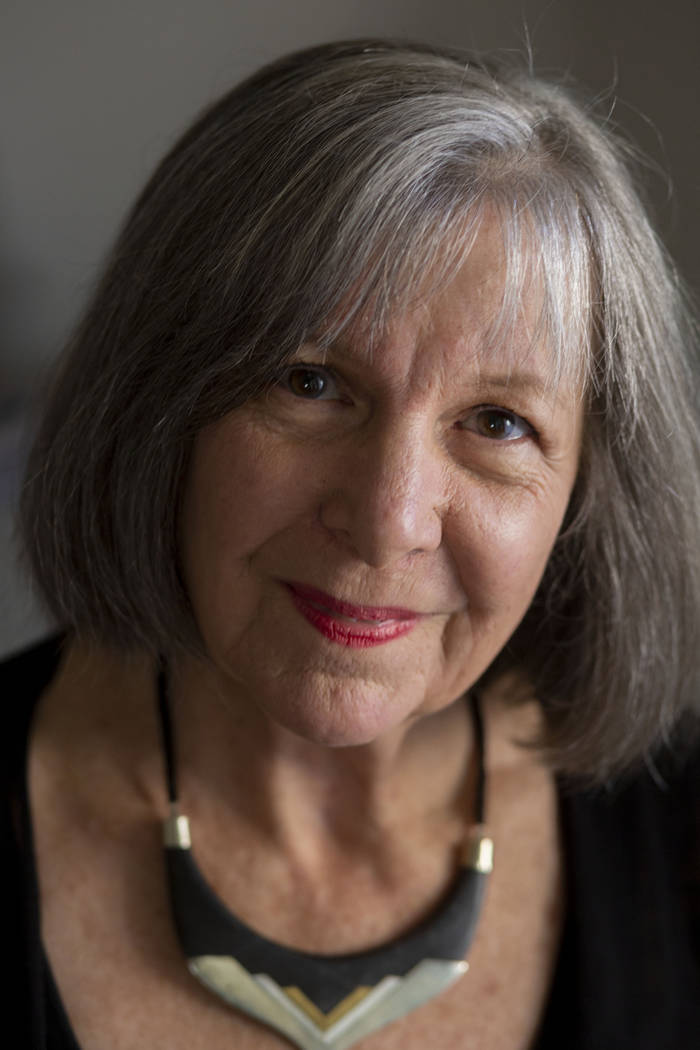 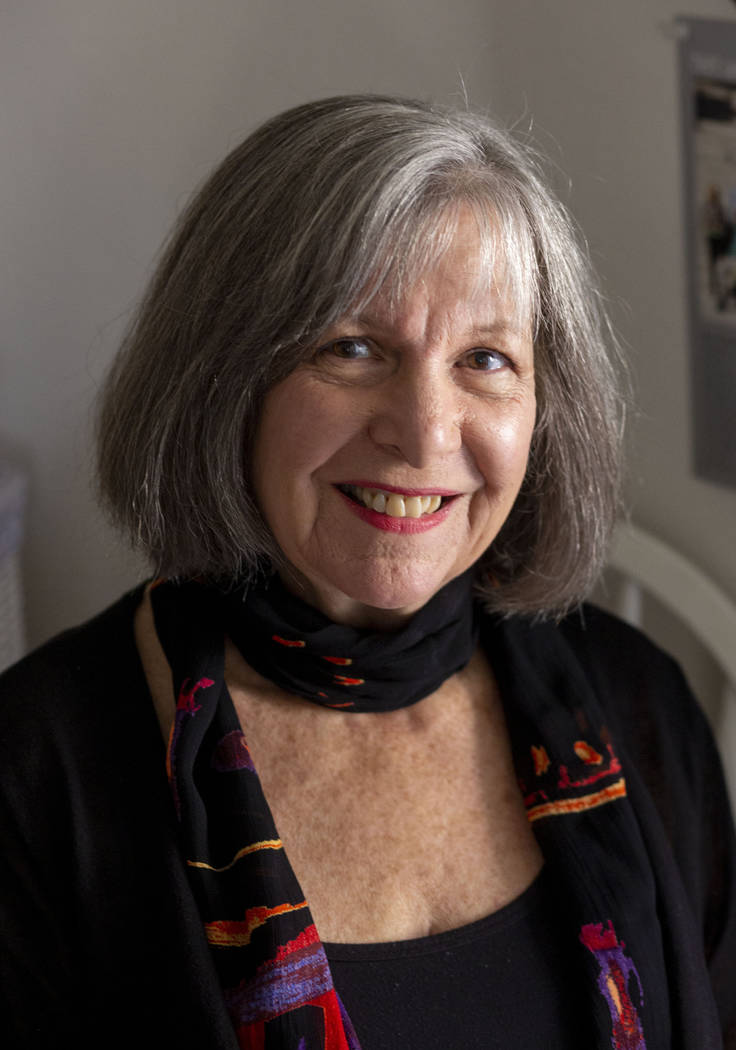 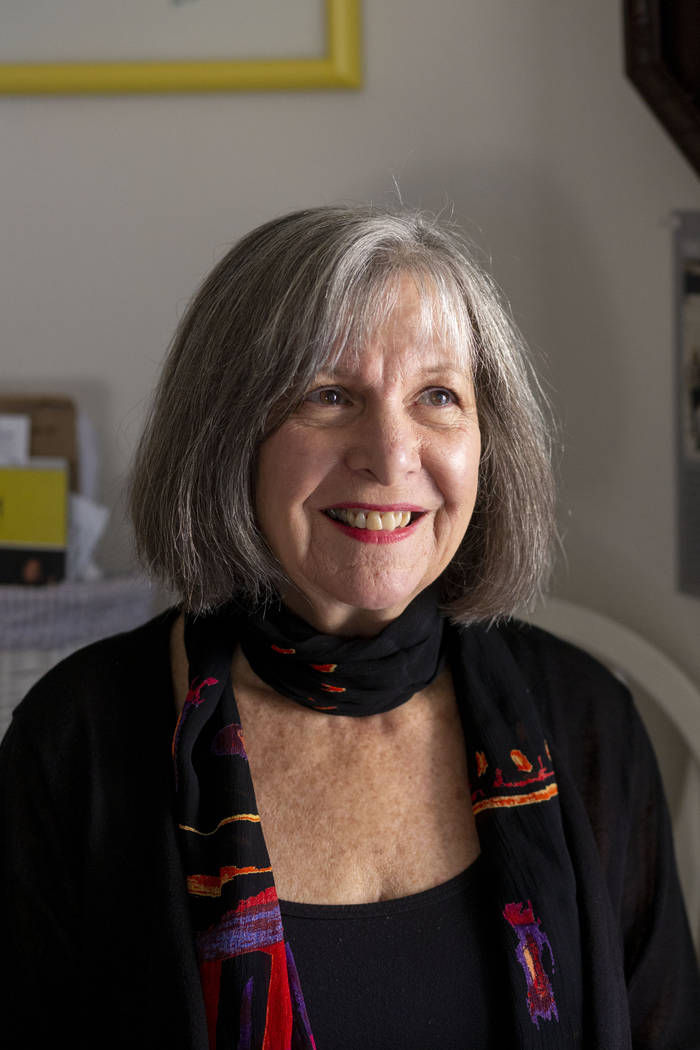 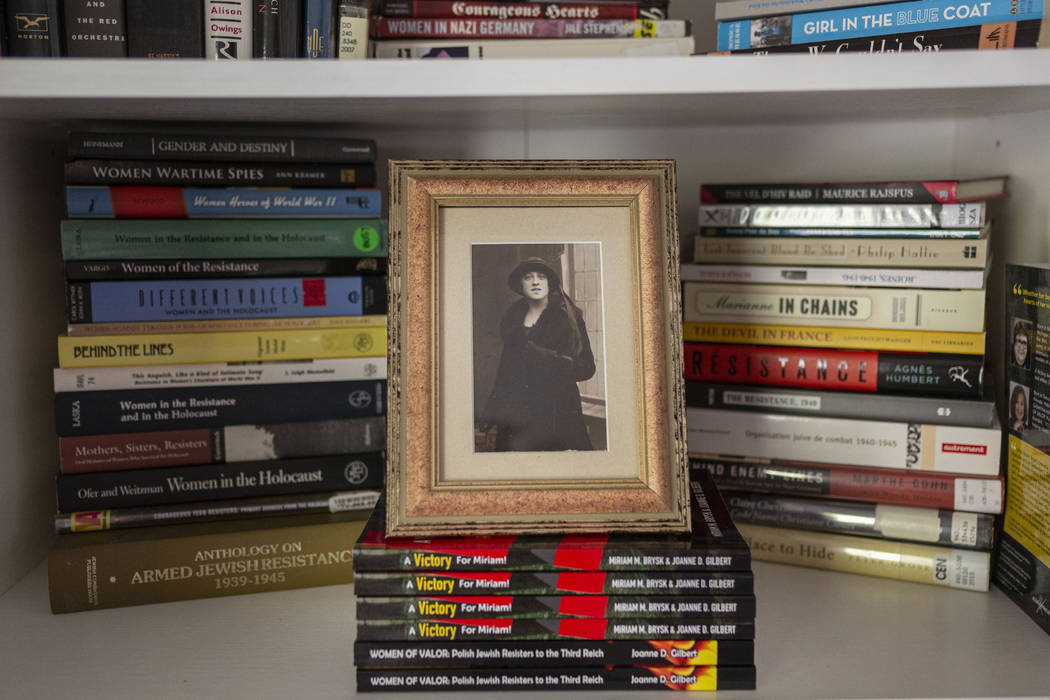 Author Joanne Gilbert's recent book, A Victory For Miriam, and a photo of her beloved great-aunt Rivka Wineman in Vilna Lithuania in 1941 before the German occupation, in her Las Vegas home on Thursday, Oct. 31, 2019. Gilbert's book will be released Nov. 10, 2019. (Elizabeth Page Brumley/Las Vegas Review-Journal @EliPagePhoto) 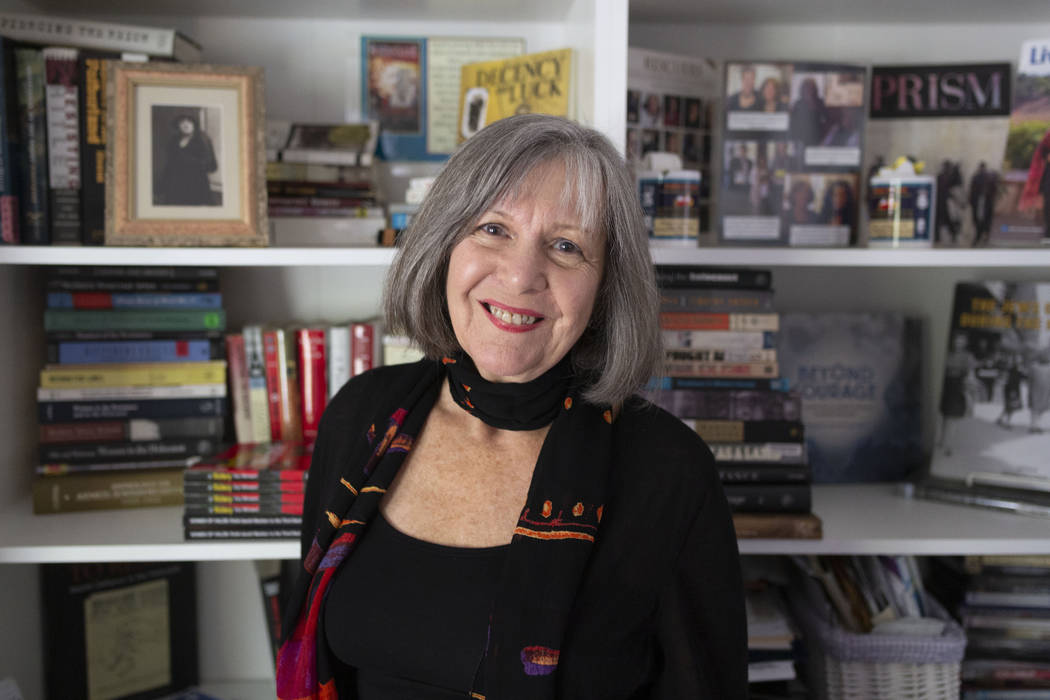 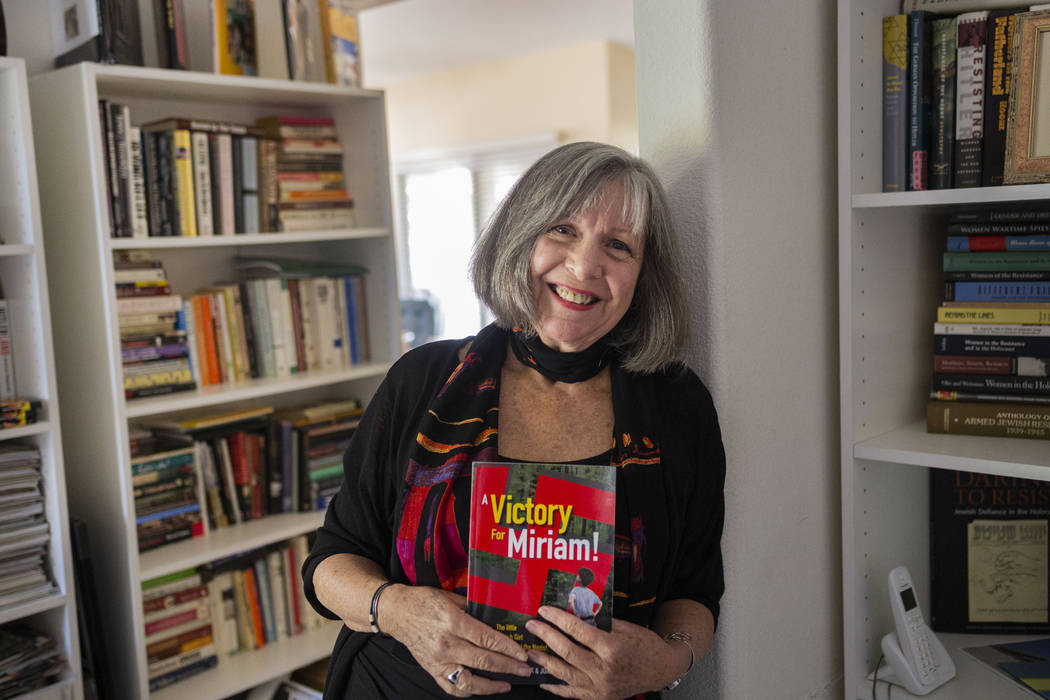 Joanne D. Gilbert often writes about survivors of the Holocaust. While she appreciates and finds value in historical accounts of all sorts, she has spent the past 10 years focusing on a specific perspective of the Holocaust.

“That is, celebrating the heroines, the women who defied the Nazis and survived,” Gilbert says. It’s an important perspective, she adds, because “it hasn’t been told before.”

Gilbert continues pursuing her unique mission in her latest book, “A Victory for Miriam! The Little Jewish Girl Who Defied the Nazis” (Adira Press, $22.95), in which she joins with Miriam Brysk to tell Brysk’s story of surviving the Holocaust as a child and creating her own life afterward.

A book release and signing event is scheduled for Sunday — the 81st anniversary of Kristallnacht — at Midbar Kodesh Temple, 1940 Paseo Verde Parkway, Henderson. The event, which will run from 2 to 4 p.m., is free and open to the public.

Gilbert credits her grandmother with piquing her interest in educating others about the Holocaust. Her grandmother had left what’s now called Vilnius, Lithuania, and immigrated to the United States in 1915, and Gilbert remains amazed even today about how her grandmother came to this country unable to speak English and having “no idea what awaited her.”

When Gilbert was a child, she would listen to her grandmother’s stories about her family and their life in Europe. “I was just thrilled,” Gilbert says. “Boy, the bravery of going into the unknown.”

Instead of listening to fairy tales or reading picture books, “she and I would sit together and pore over her old photo albums still filled with pictures of relatives,” Gilbert says.

However, those sessions invariably prompted questions. Gilbert always would ask her grandmother what happened to the relatives whose images she saw, and where her aunts and uncles were now.

As she got older, Gilbert began to ask other questions. Chief among them: “Why didn’t anyone help them? How could that be?”

Gilbert couldn’t accept the notion that Jews, and her own family members, were merely victims who “went like sheep to (the) slaughter. Everyone just kind of accepted it. That was never questioned.”

The questions stayed with Gilbert as she got older, influencing the civil rights activism that she began to embrace around ninth grade. As an adult, she became an educator and started searching for stories of people, particularly strong women, who resisted the Nazis.

The quest led to the publication of her 2014 book, “Women of Valor: Polish Resisters to the Third Reich” — updated and re-released in 2018 as “Women of Valor: Polish Jewish Resisters to the Third Reich” — which was based on first-person interviews with women who, as girls, not only had successfully defied the Nazis, but then went on to live long, productive lives.

“These women were not victims any way you looked at it,” Gilbert says. “Hitler was not the center of their life. They went on afterward and became wives, grandmothers, attorneys, teachers, writers and artists, and they had children and grandchildren.”

In hearing their stories, Gilbert also was surprised to hear that “each one of them had been helped once, many times, sometimes by non-Jewish (people), and that’s part of the story that’s not told either.”

Miriam Brysk was profiled in Gilbert’s book. When Gilbert asked if Brysk would be interested in working with her on an extended memoir, “she was all for it,”Gilbert says.

Brysk was 4 and living in Warsaw when the war upended her world. By age 7, she and her family were living in the forests of Belarus with anti-Nazi Soviet partisans, facing hunger, disease and the daily threat of discovery and death. After the war, Brysk, now 84, became a scientist and medical school professor, Gilbert says. In retirement, Brysk, who now lives in Ann Arbor, Michigan, also became a poet and artist whose work sometimes reflects her childhood experiences.

Gilbert says the book “would be easy to incorporate into a middle school and high school curriculum,” although adults who have read it “absolutely loved it.”

“My hope with Miriam was to create a story that would inform and inspire without traumatizing. It would do this by showing how strong this little girl was when she needed to be.”