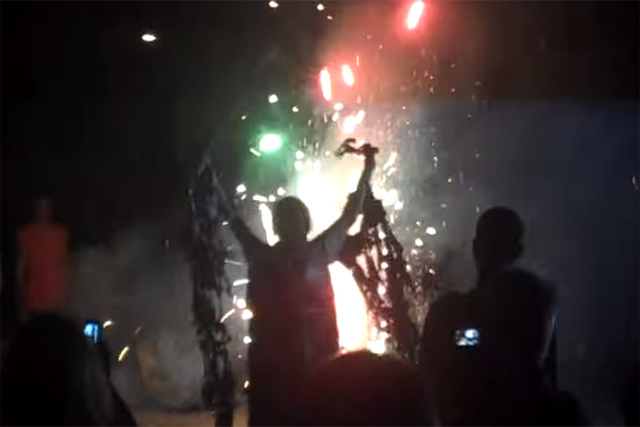 COOPERSVILLE, Mich. — John Fletcher gets a bang out of firecrackers — especially those he wraps around himself.

“I guess I’m a little nuts,” said Fletcher, who goes by the name Ghengis John the Human Firecracker. “I got a little bit of ‘Hey, look at me.’”

He performed last weekend before 300 people and four firefighters at a motorcycle rally in the western Michigan town of Coopersville. It was one in a string of shows that Fletcher said would be his last.

He has yet to keep those promises.

“He’s getting too old,” Sharon Warner, a friend of Fletcher’s, told the newspaper. “I’ve been telling him that a long time.”

Fletcher said that over 16 years, he has set off 600,000 firecrackers attached to his body. His ribs have been fractured 17 times and once Fletcher says he was knocked unconscious. He also has been burned.

The gravel pit scale operator from Pinckney doesn’t get paid for his performances and asks audiences to donate to charities.

It costs $140 and takes two weeks to put together his firecracker suit, which are strands of firecrackers are glued to four leather sheets Fletcher hangs over his abdomen, back and arms. He wears safety glasses and a compressed leather vest.

At the motorcycle rally, a volunteer lit the fuse for the firecrackers, and pretty soon, Fletcher began to snap, crackle and pop for about 45 seconds. Emergency medical technicians checked him over for injuries. The most serious appeared to be a bloody nose.

“This is why you never do this at home,” Fletcher told the newspaper.

To that, a paramedic replied: “This is why you never do it.”