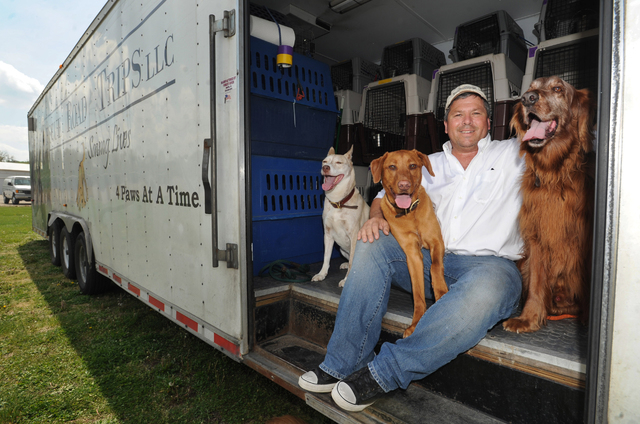 In this May 8, 2014 photo, Greg Mahle poses with his dogs Murphy, Beans and Treasure, in the Rescue Road Trips trailer. Mahle drives more than 40,000 miles a year rescuing dogs from shelters and pounds in the south. Each trip can save 80 dogs from being put down. (AP Photo/Zanesville Times Recorder, Chris Crook)

ZANESVILLE, Ohio — Every two weeks, an Ohio man drives 4,200 miles to save unwanted dogs from overpopulated shelters in the South, packs them up in a semitrailer and finds them loving homes in the northeastern United States.

Greg Mahle, 51, begins the five-day journey in his Zanesville hometown in eastern Ohio and drives down to Houston.

He picks up about 80 dogs there and at stops in Mississippi, Louisiana, Alabama and Tennessee. He then takes them to pre-arranged homes in states including Pennsylvania, New York, New Jersey, Connecticut and Vermont.

Mahle estimates that he and his Rescue Road Trips company save about 2,000 dogs from euthanasia every year.

“You see the worst of people and you see the worst situations in the beginning when you’re picking the dogs up,” Mahle told the Zanesville Times Recorder. “By the time you get to New England, though, you have people crying for these dogs, these dogs who have never had anyone to cry for them.”

Mahle said he tells the dogs’ new owners to go ahead and “cry a river for them.”

“They’re a rescue dog,” he said. “No one has ever cared for them, they’ve been thrown out like the trash, and now they’re a precious part of your family.”

Mahle said his typical $185 fee allows him to make a living but requires him to operate on a shoestring budget to keep up with gas, maintenance and dog food costs and pay sanitation workers to sterilize the semitrailer after each trip.

The journey includes many stops with assistance from hundreds of dog lovers across the country who help feed, water, walk and play with the dogs.

Mahle said he sleeps on a small mattress in the back of the truck, snuggling and comforting the more timid dogs.

Mahle saves dogs in the South and takes them to the Northeast for a number of reasons.

In the South, fewer facilities spay and neuter pets, there’s a general a lack of breeder regulation and the winters are warmer, all leading to an excessive amount of adoptable dogs at low prices, he said.

“Enterprising souls on both sides are making this market work,” Mahle explains on his company’s website. “In doing so they are not only improving the lives of northern families but also saving the lives of southern dogs.”

Mahle said overcrowding at southern shelters is so bad, that some dogs only last a few days before workers euthanize them to make room for the constant influx and others are killed on the spot for fear of disease.

Mahle said he struggles with the thought that there’s no way to save them all but is overjoyed at the ones who are spared.

“It’s like being in a truck full of lottery winners,” he said. “You can see it in their eyes and their disposition. They know something good is going to happen to them.”