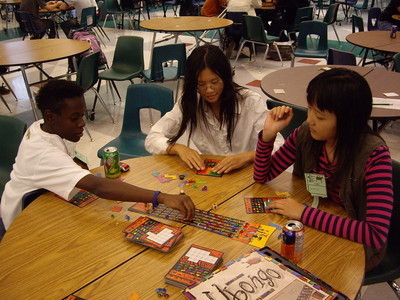 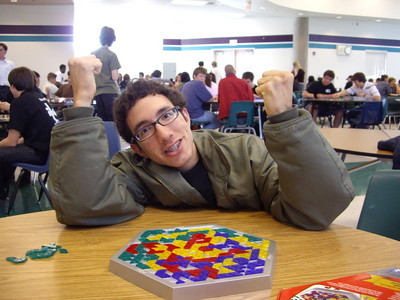 It’s a Friday afternoon; school’s over.

Alone and in groups of twos, threes and more, students at Advanced Technologies Academy trickle into the school’s student activities center, or SAC for short.

During school hours, the SAC is a cafeteria. But after the students hand over their tickets and receive name tags, they enter a room transformed.

The lights in the front half of the SAC are off.

On one wall, two projectors illuminate a white screen on which students are hard at work playing the video games projected on it.

Three televisions with more video games are set up throughout the room.

Where students normally line up to buy lunch, Twister mats are laid out.

In the back of the room, tables and bookshelves display hundreds of boxed games.

More than 200 students gathered in the SAC for this year’s marathon in mid-October — many more than had attended the Halloween Dance the previous week.

The event ran from 2 p.m. to 7:30 p.m. Admission — $5 in advance, $6 at the door — covered three sodas, three slices of pizza, unlimited popcorn and the freedom to play any of more than 250 different games.

The games ranged from the fairly well-known — such as Monopoly, Uno and Risk — to the more obscure, such as Cleopatra, Pente, Through the Desert, Scotland Yard and Ricochet Robots.

The marathons started in 2005, when Mike Patterson, a geometry and trigonometry teacher at A-TECH, obtained about $3,000 in grants for games to teach geometry concepts.

Eventually, he started a board game club for students who wanted to play the games after school, with the help of a former teacher who since has left A-TECH. The club now has about 75 members and meets three times a week.

And then the concept expanded further.

According to Patterson, the other teacher said, " ‘You know what we need? We need a Friday night when we can play games late.’ And as soon as he said that, it was a big hit."

The first marathon was early in the 2006-07 school year and brought in about 45 students. By the third marathon, at the end of that year, more than 160 attended.

Before the fourth marathon this fall, Patterson speculated, "I think we will exceed 175, which is about 15 percent of our entire school."

"We’re at 170 now," he said minutes later in a conversation with A-TECH principal Karen Diamond. "This is crazy."

As he spoke, more students were entering. By the end of the marathon, Patterson was practically speechless at the total head count of 215. His goal for the end of the year, he said, was 200, and since that had been surpassed, he was working on a new goal.

At first, Patterson said, he thought students came to the marathons because they loved board games. After seeing the popularity, he said, he now thinks the events are popular because they provide an after-school chance for A-TECH students to socialize without the stress and intimidation of a school dance.

"Because we’re a magnet school, kids don’t see each other after school," Patterson said. A-TECH students come from almost every corner of the Las Vegas Valley, which makes hanging out after school fairly complicated.

A-TECH sophomore Melynn Thompson also expressed enthusiasm. "You get to hang out with friends and play board games which are, like, awesome."

McDowell, who was attending her first marathon, said it was what she had expected. She noticed that the vast majority of students stayed within their groups of friends and played games only with their individual groups.

A-TECH senior Aaron Barnaby said he spent most of the marathon playing Twister. "Lots and lots of Twister."

Despite the large number of students in attendance, some weren’t satisfied with the numbers.

"I wish there was more people," lamented freshman Lauren Rouw. It was Rouw’s first marathon, and she said she liked the atmosphere.

Patterson said the next board game marathon is scheduled for Feb. 1, though there may be another between now and then if demand is high enough. Any middle school or high school student is welcome to attend. Patterson can be contacted at mnpatt@interact.ccsd.net.